Make Music Day is a world-wide event open to anyone who wants to join in and music on June 21.

Join in the fun and make music on June 21

Held annually on the June 21st summer solstice, Make Music Day began in France in 1982. Today there are events in a couple dozen US states and 120 countries around the world. In some places, the day has become a national festival where free, live music is found almost everywhere.

Any kind of music is welcome on Make Music Day. And, unlike most music festivals, you don’t have to be a professional to participate. The event encourages everyone who loves music to gather with family, friends, and complete strangers to make music on June 21.

Check the Make Music website to join in the fun.

A glimpse back to Make Music Twin Cities 2017

While last year’s events in St. Paul were aimed at attracting music makers rather than music appreciators, the totally unmusical (like me) are more than welcome to attend Make Music Day events.

Being completely unable to carry a tune and having finally given up any fantasy of ever playing the flute again, I am among the totally unmusical. But I like music and Make Music Day sounded fun, so I decided to check it out.

I went to two events outside the Minnesota State Capitol. Both were fun to observe, and it looked like the participants were having a blast.

Old time tunes at the Accordionathon

I’ll be honest, it was the visuals that drew me to the Accordionathon. The image of a bunch of accordion players outside the newly remodeled Minnesota State Capitol seemed worth checking out even on a miserably hot day.

And I do have a soft spot for the accordion. My mother had one long ago. Once in a while (back when we were little kids) she would haul it out of the basement closet and play things like the Tennessee Waltz and Beer Barrel Polka for us. Her accordion was huge, a gleaming red monster, but she was actually a pretty good musician. She tried to teach me how to play, but it wasn’t exactly my musical genre . . . and there was the fact that playing an accordion requires both a good sense of rhythm (which I totally lack) and physical coordination (also totally lacking).

While the group at the state capitol Accordionathon started small, it kept growing until there was a pretty big group. 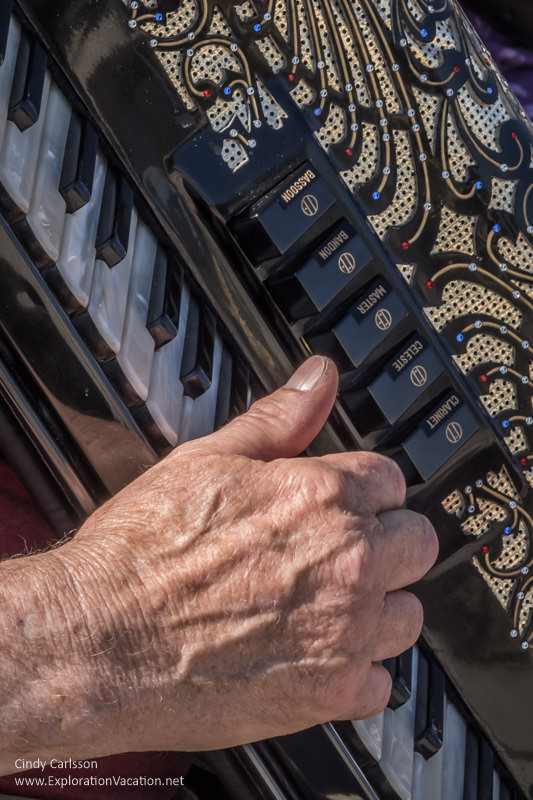 As they were all at different skill levels, the Accordionathon kept most of the music pretty basic. They also provided guidance on how to fit in (musically) if you got lost along the way.

While there seemed to be a mix of players, one group stood out: the Czech Area Concertina Club from New Prague, Minnesota. They had beautiful concertinas, including a historic one, and they really knew how to play!

Who knew the much-maligned accordion could be so fun?

It’s like being in high school band again at Sousapalooza

Apparently it’s a thing in the USA.

The phenomenon seems to stem from a concert band score called Sousa Palooza. It’s a popular piece for young bands that mixes together pieces from eight John Philip Sousa marches. The full piece includes bits of the Manhattan Beach; El Capitan; The Thunderer; High School Cadets; Washington Post; The Liberty Bell; Stars and Stripes Forever and Fairest of the Fair. (Some sites say there are bits of nine marches in the piece, but no one else names them.)

I have to assume this Sousa march mashup was the inspiration for these Sousapalooza performances. (They are held all over the country on Make Music Day and on other occasions.) However, at Sousapalooza the band performs all eight pieces in full, not the mashup version. Sometimes they play other things too, but the Sousa pieces seem to be pretty consistent.

I spent years in high school band. (Although I twirled flags in marching band because I was too uncoordinated to play the flute and walk in step in a straight line all at the same time.) However, I’ve never been a big fan of the marching band repertory. It’s fun to hear at a parade, but one Sousa march sounds pretty much like another to me. So again, I was here for the visuals.

I was hoping the Sousapalooza would have a huge brass section with dozens of sousaphones (a type of wrap-around tuba used in marching bands) and loads of trombones. There weren’t that many, but it was fun anyway.

And there were loads of flute players, so I know my (lack of) talent wasn’t missed!

Make Music Day 2018 is just around the corner.

For the musically inclined among you, it’s time to loosen up your voice or warm up your musical instrument of choice and make plans to make music on June 21.

You can find all the options near you – or add your own – at the Make Music website.

(If you are in the Minneapolis/Saint Paul metro area, you can go directly to the Make Music Twin Cities web page to find a group create your own Make Music Day event.)

The rest of us will happily sit back and listen.