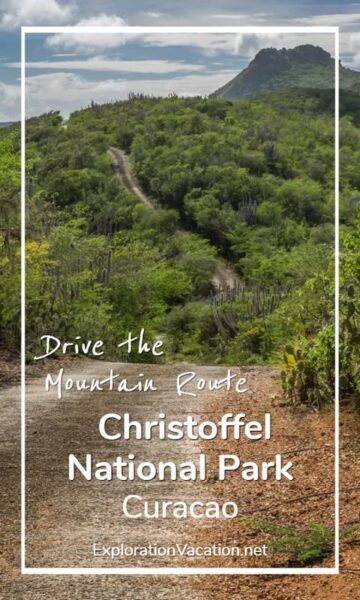 To see Curacao’s wilder side, drive the Mountain Route through Christoffel National Park. 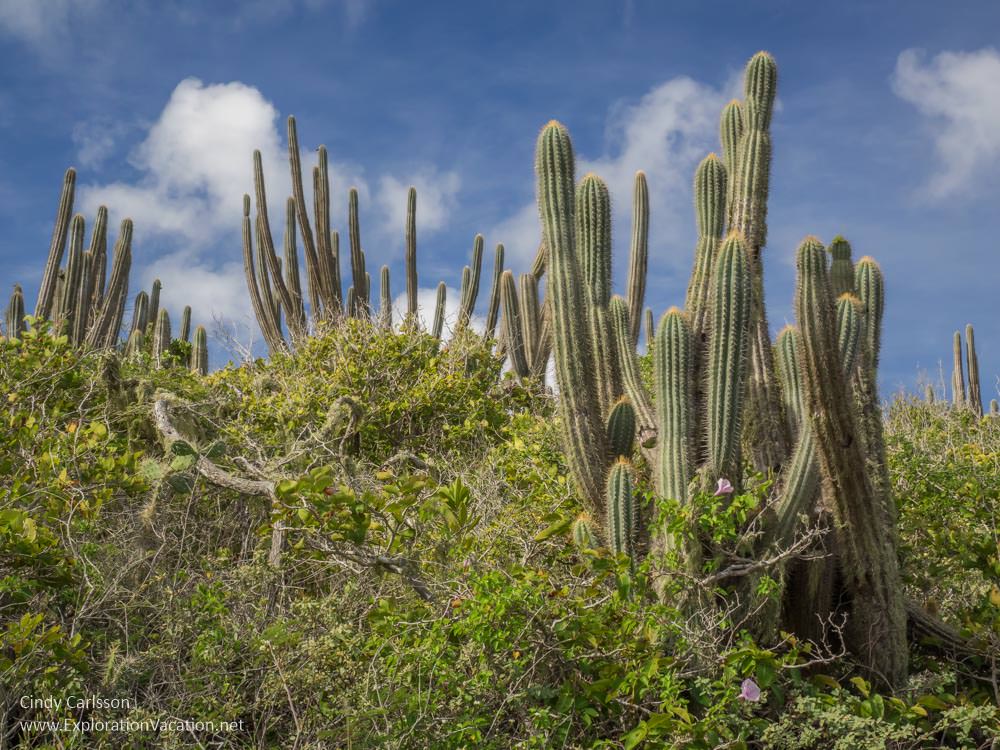 Christoffel’s Mountain Route is both the more scenic and challenging of the two. Of course, that is the route we took. (It is also the route recommended by park staff.) 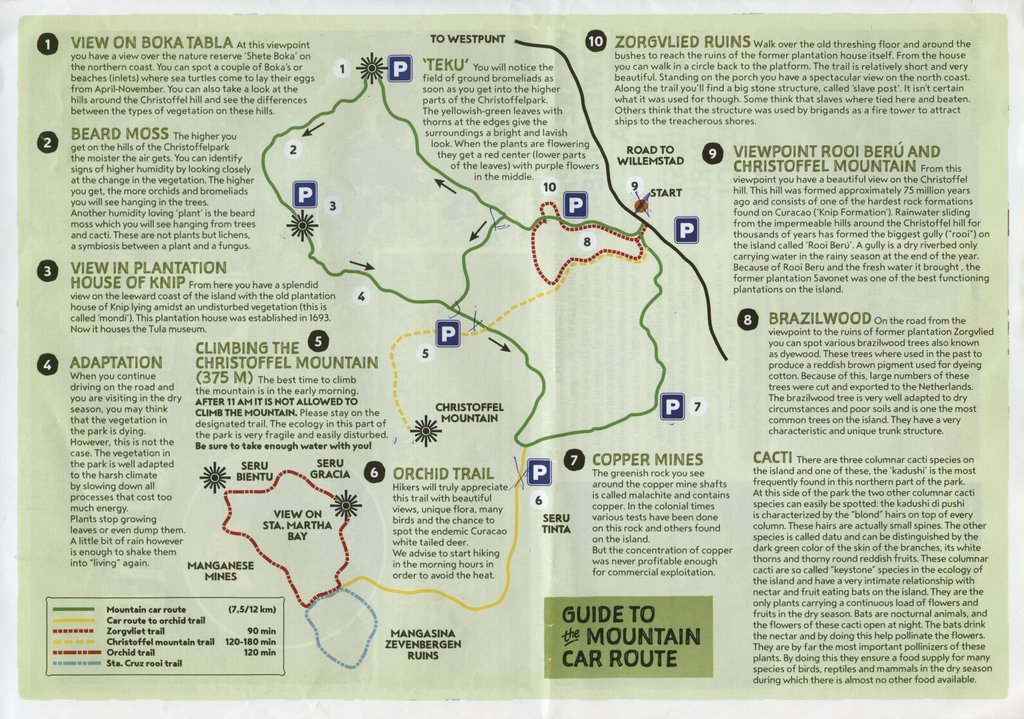 For whatever reason, I expect our first stop to be way down the road at Number 1. After all, the Mountain Route is a one-way road and all of the points of interest are numbered and labeled on the map. One would be the obvious place to start.

That means after breaking to watch one of the island’s little Caribbean white tail vanish into the undergrowth, we almost drive past the sign for Zorgvlied Ruins. 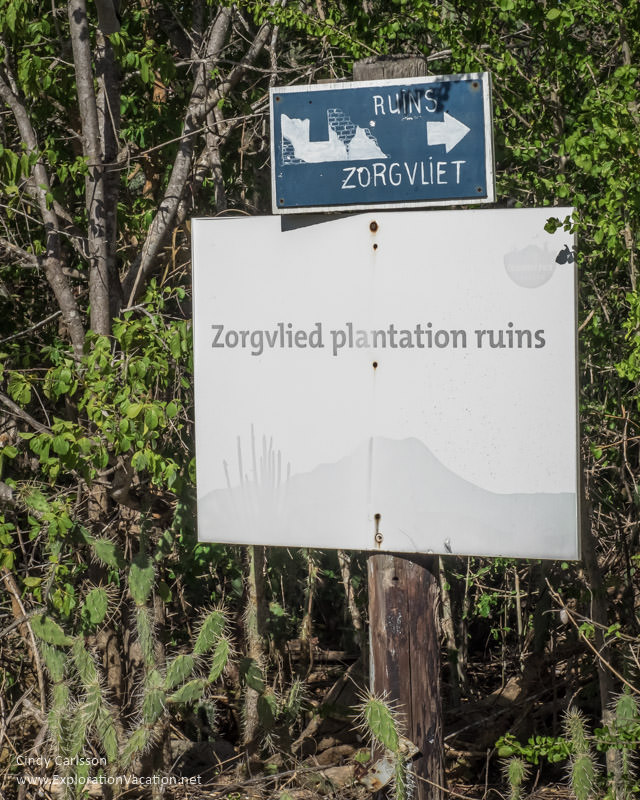 (Well, actually, we did drive past it. But this isn’t a very busy road, so we just back-up a bit to get to the parking area. That’s when I realized that the first stop on Christoffel’s Mountain Route is Number 10 on the map!)

Curaçao’s Christoffel National Park was created from land once held by three plantations. One of these was Zorgvlied plantation.

I can’t find much information about Zorgvlied plantation, so have to assume it was similar to other plantations on the island. That means it once had a large house for the owners, agricultural buildings, and housing for slaves. The surrounding land would have been used for livestock or irrigated for crops. For the most part, everything produced here would have been used by the plantation itself since Dutch plantations didn’t raise large amounts of products for export. They were more like (expensive) hobby farms run on slave labor. (The real money in this part of the Caribbean was in salt and the slaves themselves.)

From the parking lot a nice trail leads off into a forest of mostly small, scrubby trees and cacti. 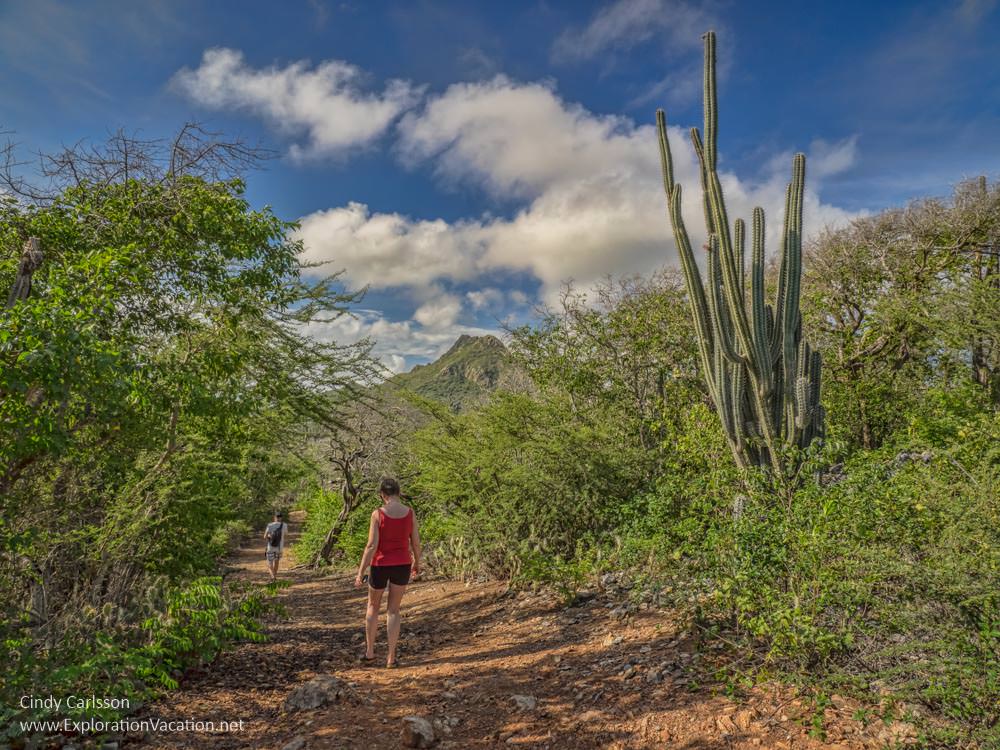 We reach Zorgvlied ruins – or at least the ruins of a large stone structure that we assume to be Zorgvlied – after only a few minutes. 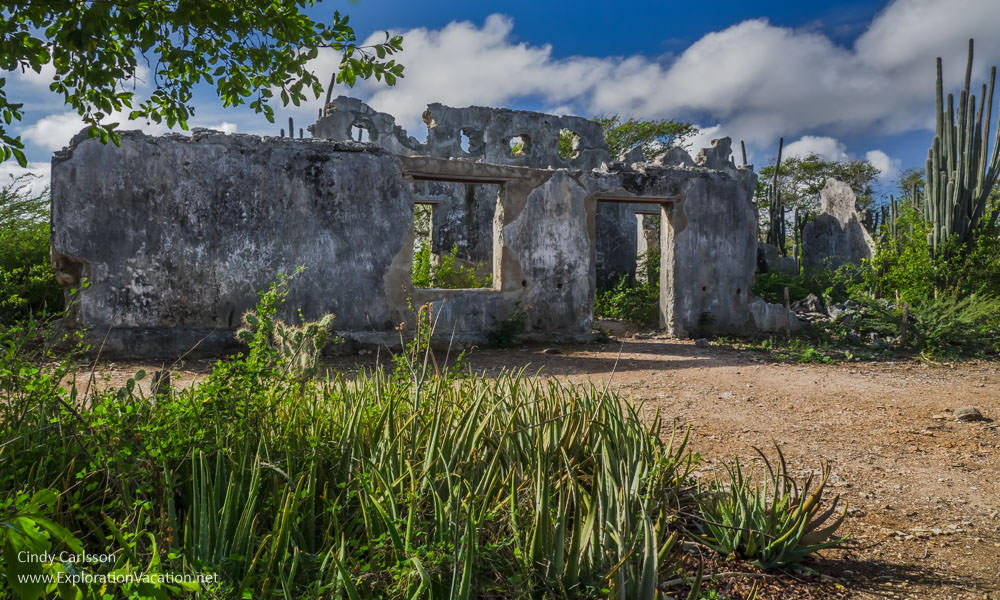 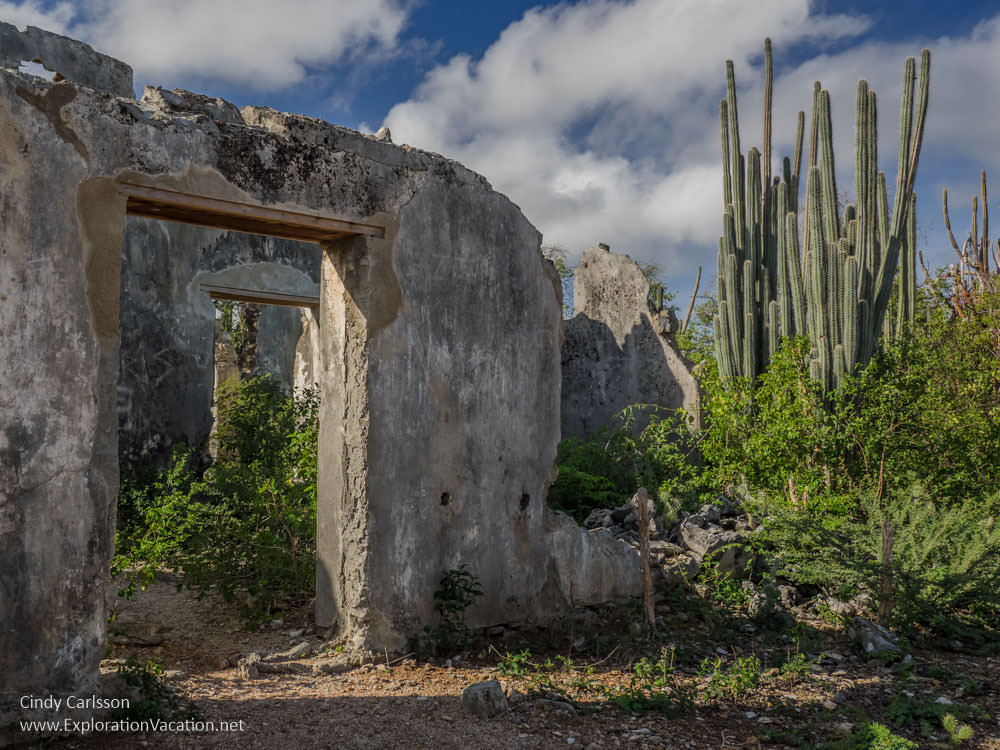 I think these are the remains of the plantation house. However, it’s a little hard to tell.

And the “spectacular view of the north coast” once visible from the ruined plantation’s porch has long since been obscured by trees and cacti.

It’s not gone completely though. As, by crossing a large clear space, we find a bit of that view just beyond the encroaching vegetation. 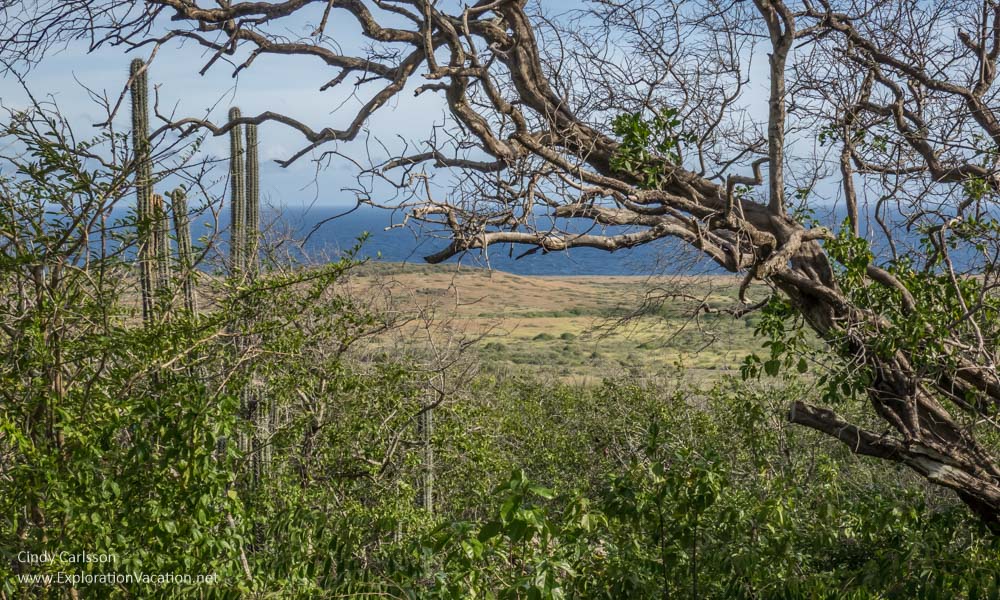 When the surrounding land was managed for agriculture, the plantation house would have enjoyed both sweeping views of the coast and cooling sea breezes.

It must have been a splendid sight.

Today it is difficult to see how the ruined and mostly vanished buildings of Zorgvlied plantation were laid out. Beyond that, it’s almost impossible to picture this landscape planted with crops and sprinkled with grazing sheep and cattle. What a change!

It makes me wonder what it looked like before Europeans arrived. How did native people live in a landscape over-grown with a hostile mix of spiky undergrowth, scruffy and sometimes poisonous trees, and towering cacti? Or was there a more benign plant community before European crops and livestock came on the scene?

An unexpected mix of cacti, bromeliads, and orchids

As we move higher into the hills the humidity increases and the vegetation yields surprises.

The first is the colorful teku (bromeliads) that all but obscure the ground. 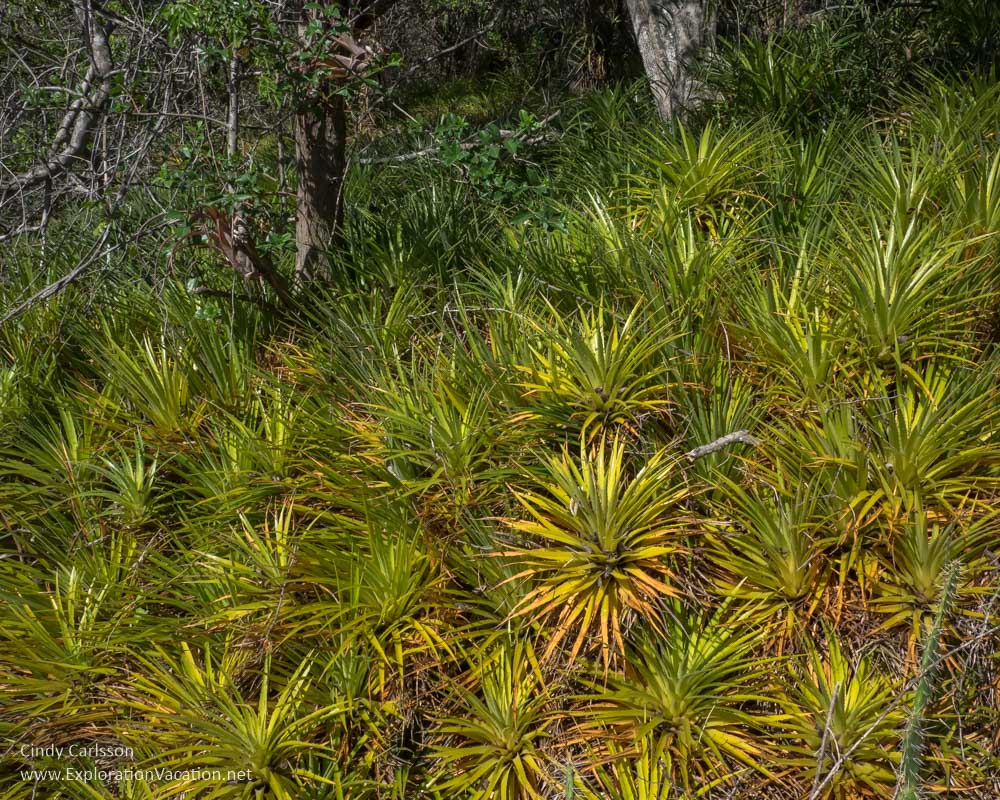 They aren’t blooming now, but they are still colorful as their spiky foliage glows in the sun.

And they aren’t just on the ground either. 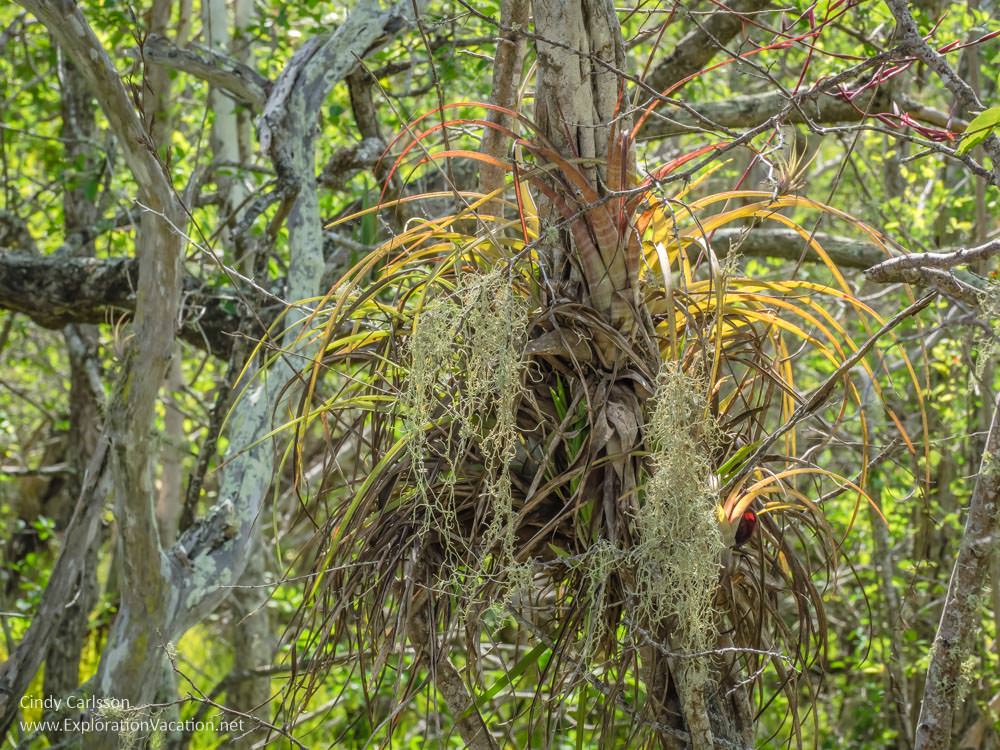 They are joined in their airy abodes by orchids (the Brassavola nodosa is in bloom!) and beard moss. 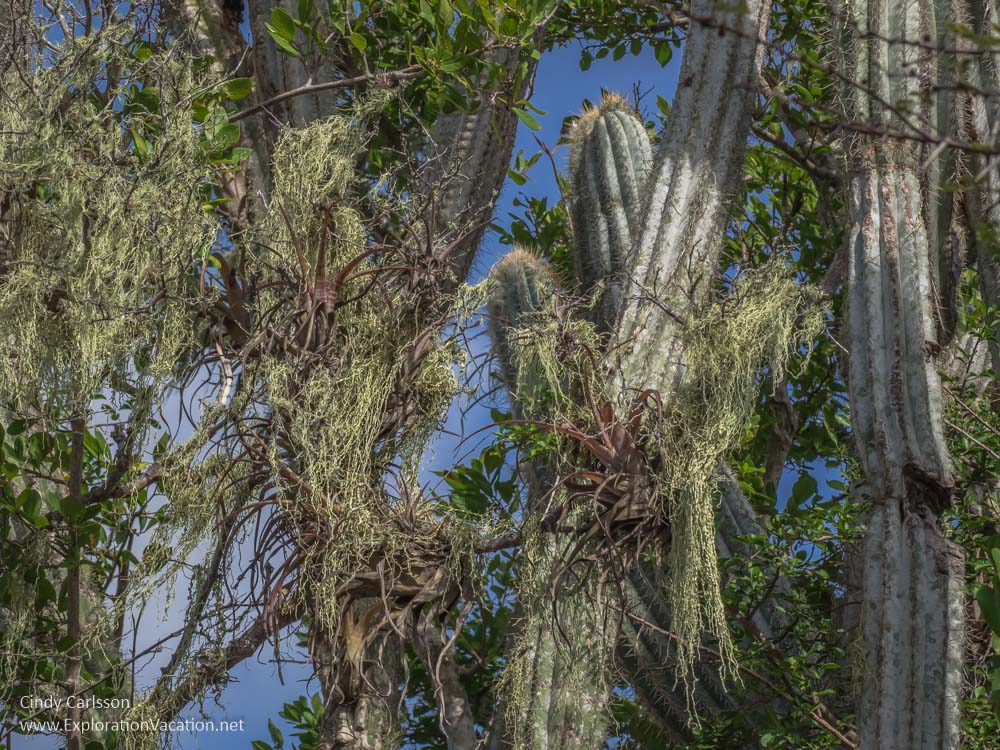 It’s an odd and unexpected juxtaposition.

Distant views of the sea

As the road alternately climbs and plunges through the rugged landscape, we often have distant views over the hills to the sea. There are even a few places to stop and take a look. 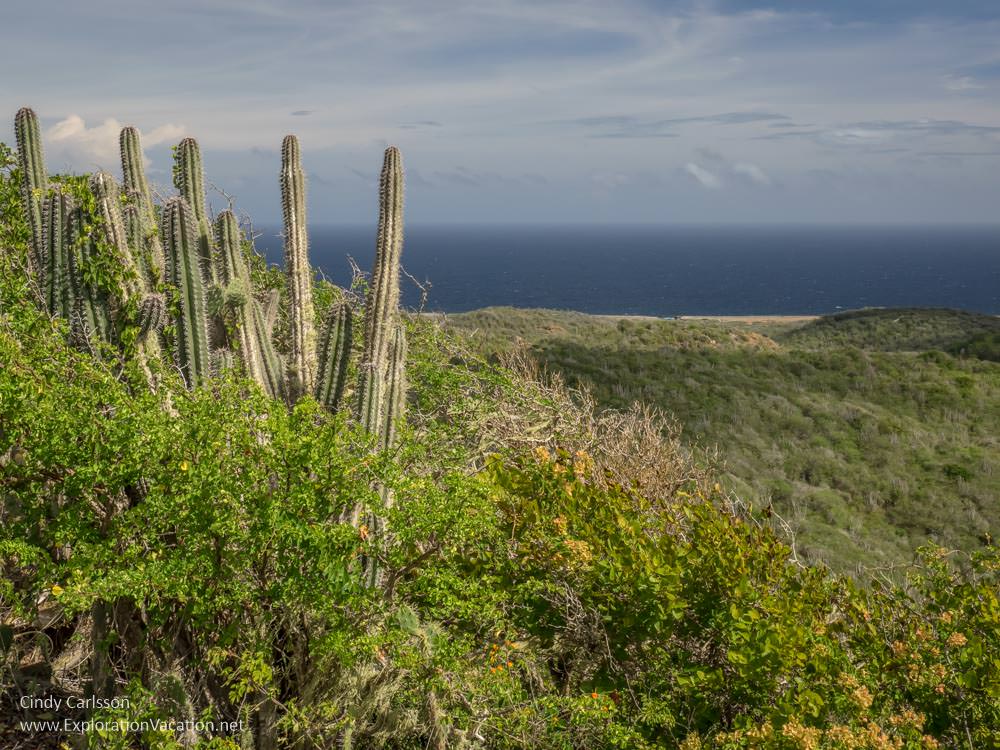 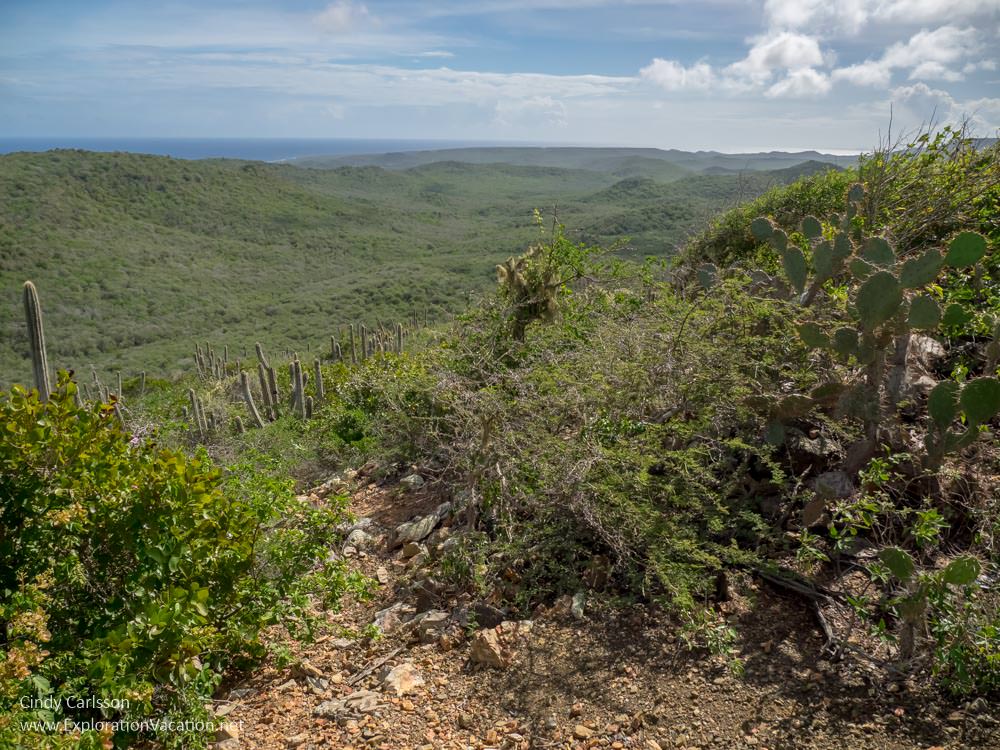 One of these is a viewpoint over the inlets of Boka Tabla (the same ones we visited earlier in Shete Boka National Park), but it’s a long way away! 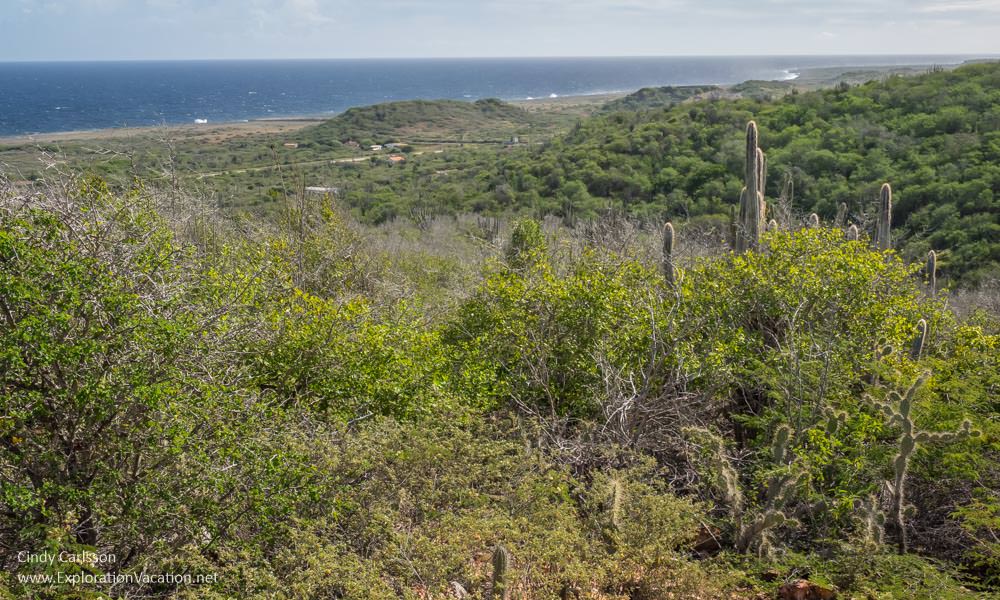 It’s much easier to see the beautifully restored plantation Knip on the south side of the island. 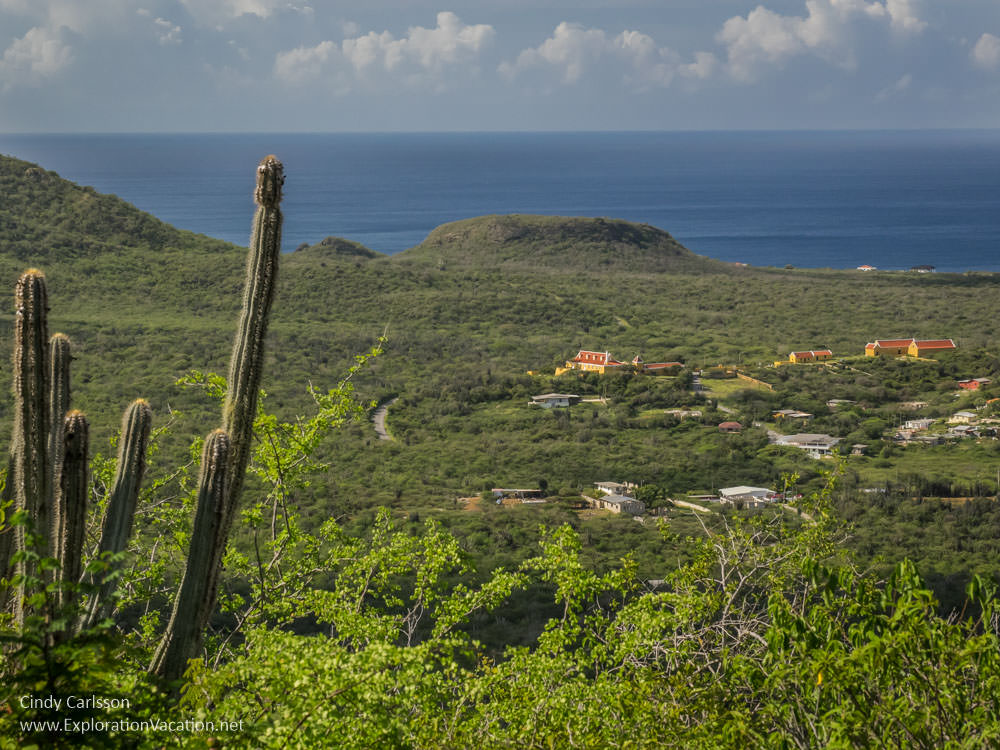 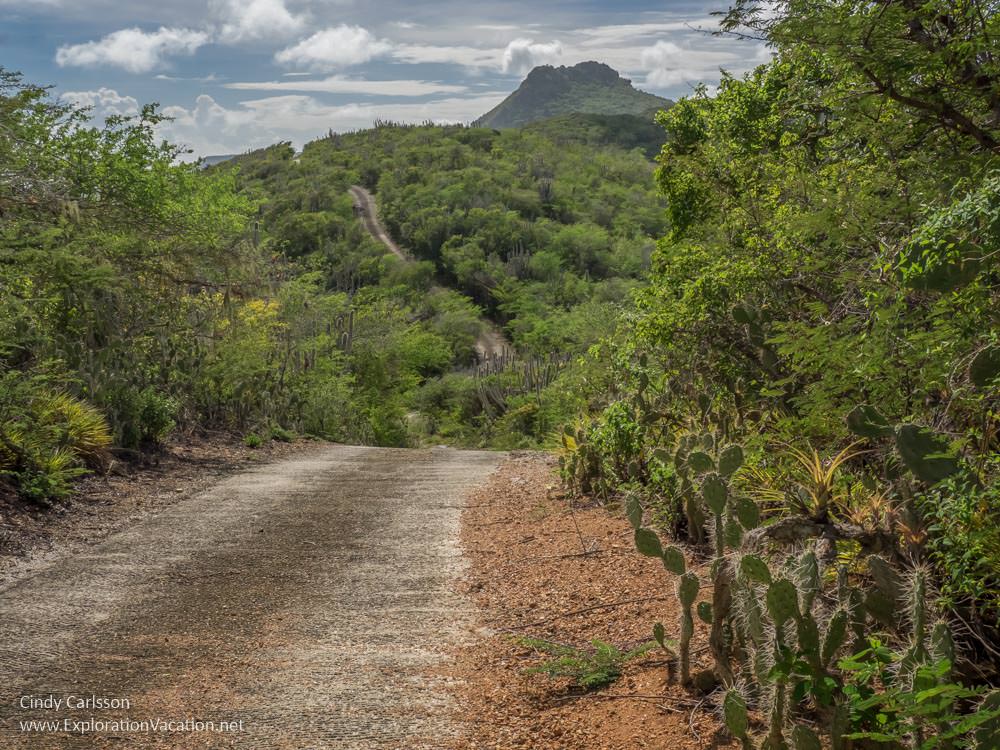 At 1,220 feet, a lot of people wouldn’t consider Mount Christoffel an actual mountain. It’s more like a really big hill. (For perspective, it’s half the height of the highest point in Minnesota, and we aren’t exactly known for our mountains.) Nevertheless, the hike to the top is considered fairly challenging and hikers are required to begin before 10 a.m.

I was a little afraid my much more athletic traveling companions would want to hike to the top.

Fortunately they were also content to just admire it from a distance as we drove around the park!

The last stop along the Mountain Car Route is a copper mine. Or maybe just an attempted copper mine, because there isn’t enough copper in the rock here to make commercial mining profitable. Not that this reality stopped people from trying. 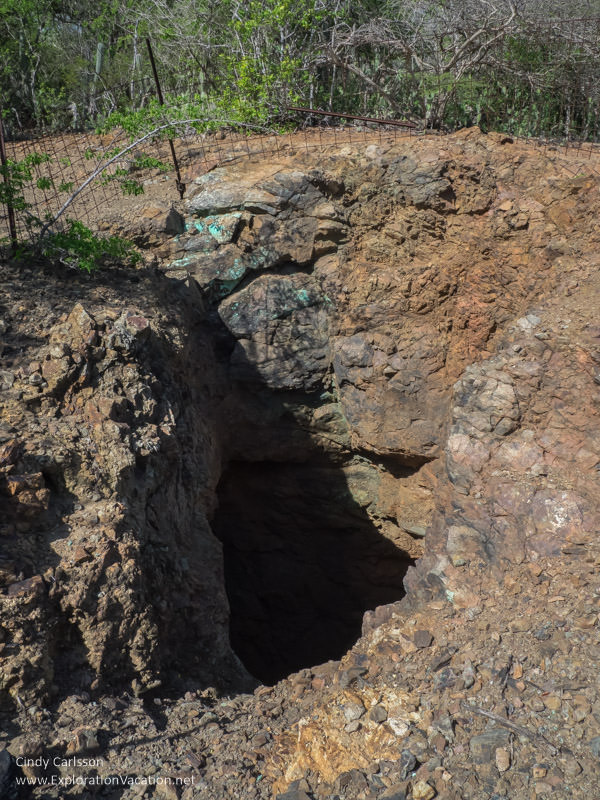 The holes aren’t very interesting, but the rocks scattered around them have wonderful odd colors from the trace amounts of minerals they contain. 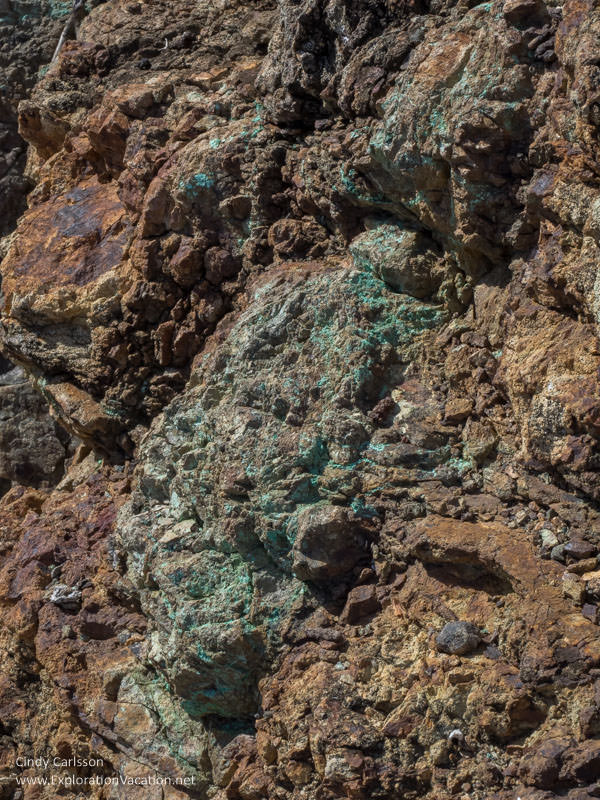 And that is pretty much the end of our Mountain Route tour of Curaçao’s Christoffel National Park.

Christoffel National Park is located on the northern end of this Dutch Caribbean island of Curaçao. The park has two driving routes, eight hiking trails, the Savonet plantation museum, a small gift shop, and an outdoor snack bar/café.

All visitors need to check in and pay their entry fee in the office near the Savonet Museum.

Despite Curaçao’s small size, Christoffel National Park is quite remote and visitors should be prepared for a day in a hot, dry location. In other words, bring plenty of water and a few snacks even if you are only driving through the park.

Christoffel National Park is open year-round, from 6 a.m. to 3 p.m.

Special tours are also available by appointment both during regular park hours and after hours.

Tips for driving the Mountain Route

There are two driving routes through Christoffel National Park. The Mountain Route is the most scenic, but also the most challenging of the two routes.

The park website claims that the park roads are suitable for any passenger vehicle, but parts of the road were pretty bad and you can’t turn around if you hit a really bad spot. We saw a few passenger cars along the way, but there were times when we were really glad to be in an SUV.

Always check road conditions at the park office and be realistic about your own abilities as a driver. 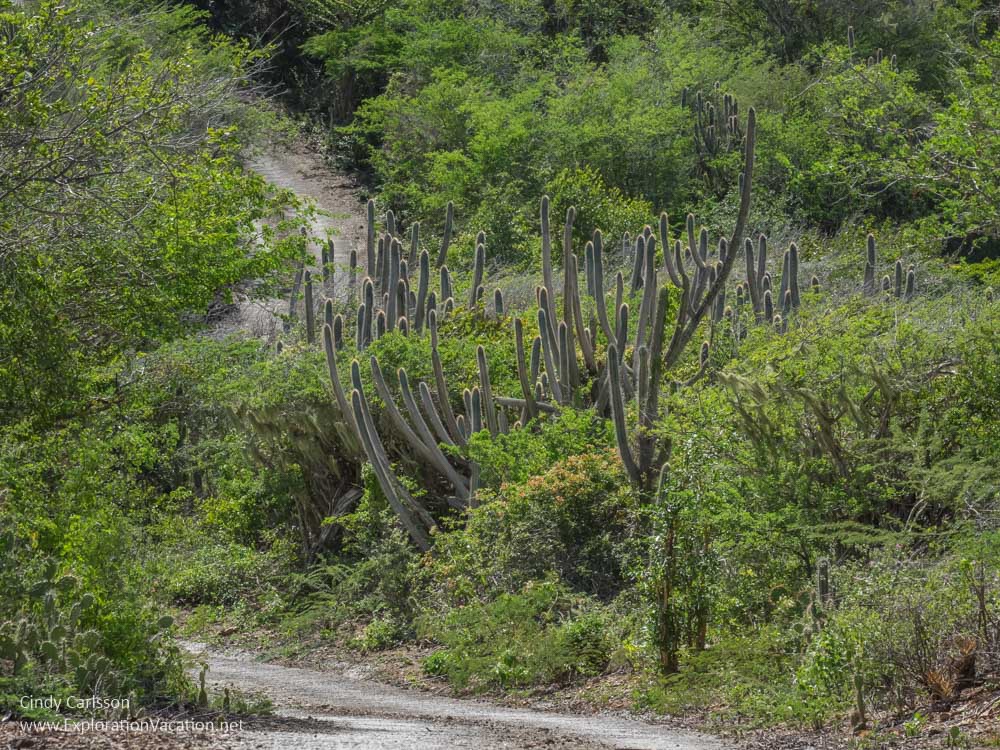 Both driving routes through Christoffel National Park are designed as loops on one-way roads.

Pretty much all the interesting scenery is on the first half of the loop. It’s not worth driving the Mountain Route at all if you don’t drive the whole thing.

(It would be perfect if vehicles could EXIT using the Mount Christoffel access road, but they can’t.)

It took us about two hours to drive the entire Mountain Route, with only a short stop at each point of interest along the way. (And one short stop to photograph a particularly nice patch of bromeliads and orchids along the road.) At that pace, we seemed to be traveling a little faster than most others on the route.

The road to the orchid trail was closed when we visited. It’s unclear whether that was for much-needed maintenance or because the orchid found in that part of the park wasn’t in bloom. Had it been open, that side-trip looks like it would have added a fair amount of time even if we didn’t hike very far.

If you plan to hike any of the trails along the way, factor in plenty of additional time. 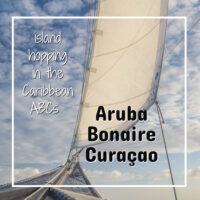