Scenic State Park, located in northern Minnesota’s beautiful Lake Country, features glistening lakes surrounded by forested hillsides. It has a bit of all the things that make this part of Minnesota special.

We first visited Scenic State Park on a search for fall leaves. However we quickly discovered that this particular park doesn’t need colorful leaves to be beautiful!

Scenic State Park protects the virgin pine shore surrounding all or part of six lakes. Uncut pine forest like this is relatively rare in Minnesota, as logging crews removed most of the state’s pine around the turn of the previous century.

Local residents saved this little patch of the northwoods from the logging companies by organizing to preserve the stands of pine and birch around Coon and Sandwick Lakes.  In 1921 the Minnesota State Legislature protected the area as Scenic State Park.

We start our exploration of Scenic State Park at the beach and picnic area. This is the most visited part of the park.

It’s also the site of the park’s original visitor facilities.

The largest of these is the picnic shelter or lodge.

The work of Depression-era Civilian Conservation Corp crews, the log structure is a classic example of the rustic style popular for recreational buildings at the time. 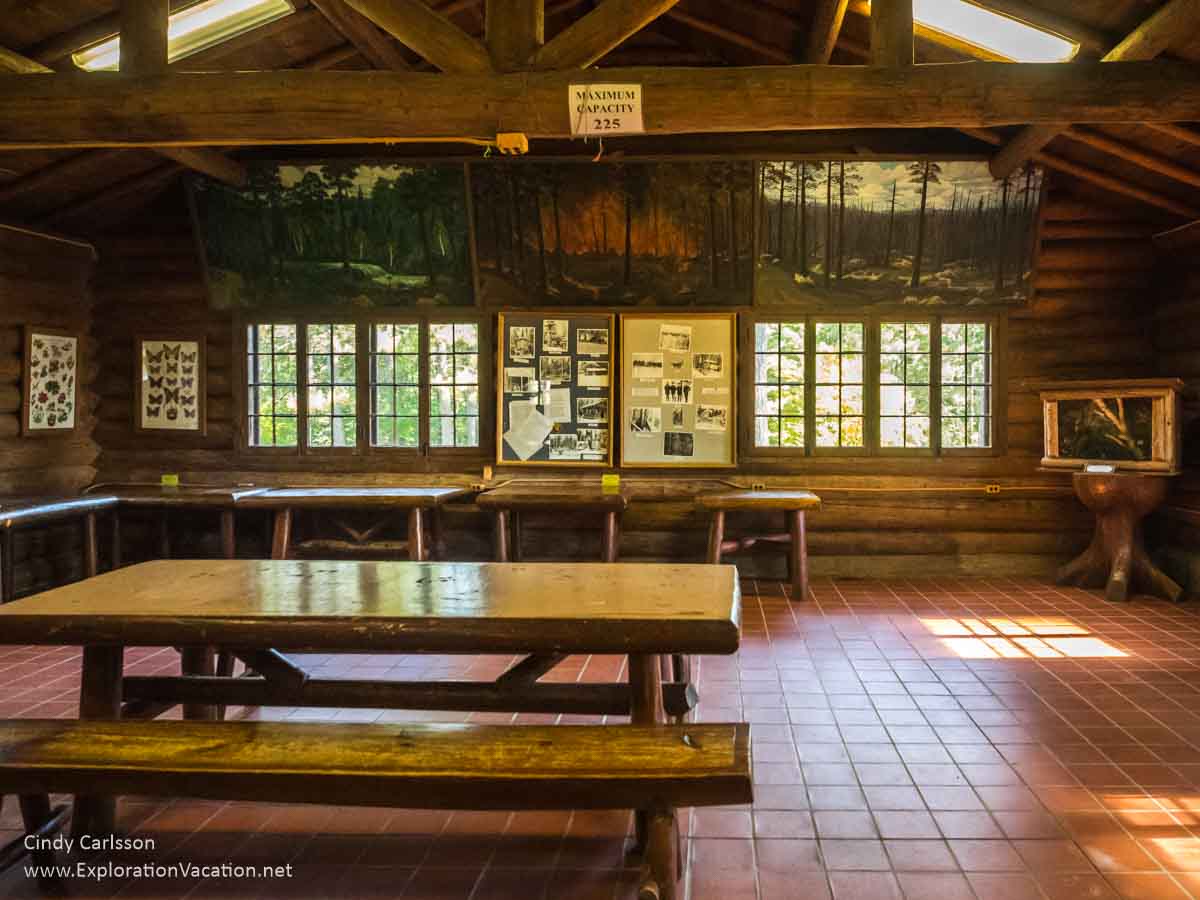 It even has a series of paintings created for the building by the CCC workers!

The picnic shelter isn’t the only CCC building here either.

A cozy cabin that once housed the park’s naturalist is nearly hidden amid the trees on one side of the picnic shelter. 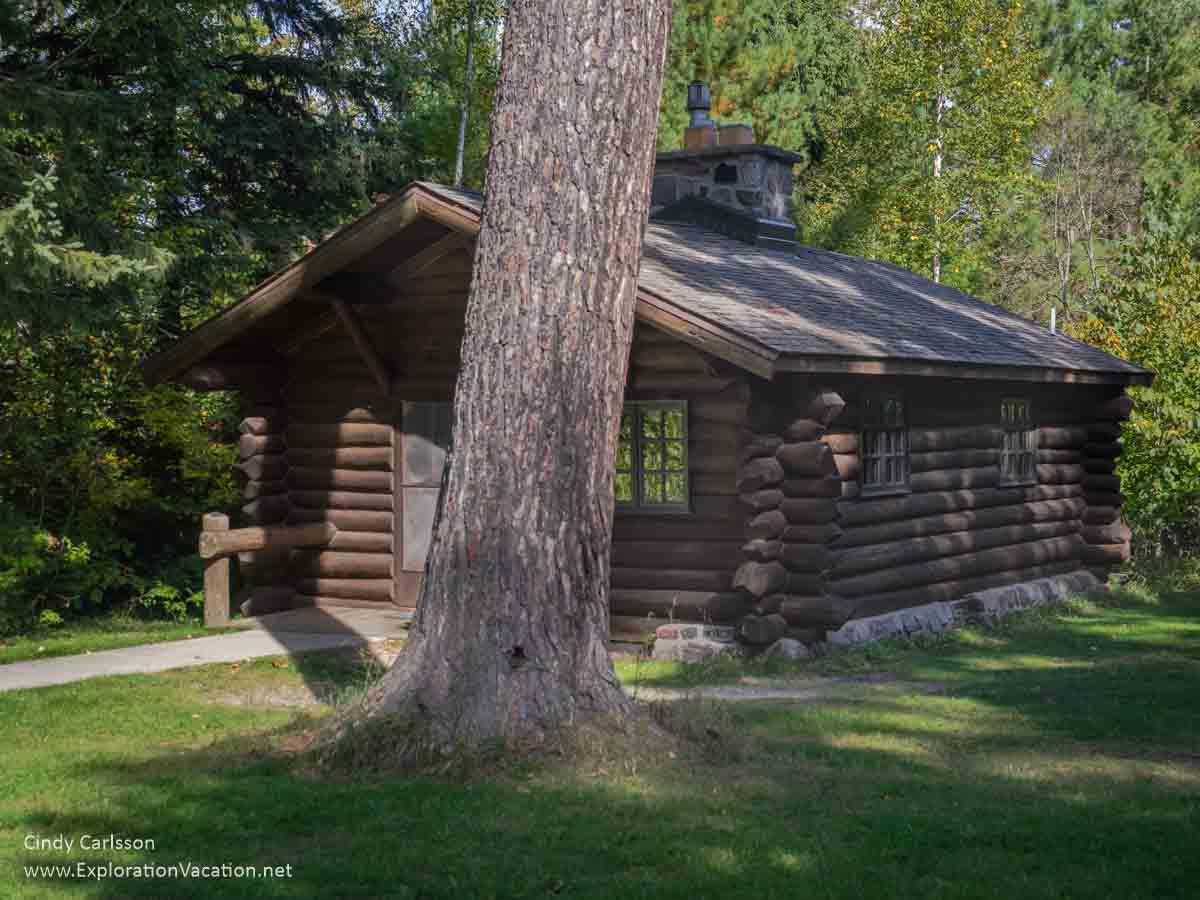 Today visitors who are quick enough to nab a reservation can stay there for a few days.

Other buildings, including a shower house and toilets, stand to the other side of the picnic shelter.

All of these, along with a number of service buildings, were constructed for the park by the CCC. This made Scenic State Park the first in Minnesota to have a full range of facilities constructed by the CCC.

Today these buildings are on the National Register of Historic Places.

The CCC in Scenic State Park

President Franklin Roosevelt established the Civilian Conservation Corps during the depths of the Depression in 1933. The program had two goals: employing idle men and restoring degraded lands and natural resources. In Minnesota, camps were quickly established around the state under the program.

It’s hard to imagine now, but when it was in full operation, the CCC camp in Scenic State Park had housing and services for two hundred men. There were barracks, a kitchen, canteen, mess hall, infirmary, and a number of other supporting structures. All of these were located along Lake of the Isles at the southern end of the park.

Building the camp was one of the CCC’s first tasks, but by no means the only one.

Under the direction of architects from the National Park Service and local woodsman Ole Evensen, CCC crews landscaped and constructed all the buildings needed for visitors to enjoy the park.

The CCC built park facilities throughout the nation, but some of their earliest and most lauded work was done in Scenic State Park. Their work was so well done that, after just 18 months after the camp opened, the Department of Conservation reported:

The work already completed by this camp has made this park the most ideal of any now under the control of the Conservation Commission.

While it’s unclear to me exactly how many buildings were constructed as park facilities, ten are preserved today. Those in the public use area include the picnic shelter, naturalist’s cabin, comfort station, shelter and latrine, water tower, and stone steps. A custodian’s cabin, ice and wood house, and a couple of equipment buildings are located in a service area that is not open to the public. Trail shelters constructed by CCC crews have disappeared over time. Likewise, if there were once guest cabins (it seems there were), they too are now gone.

Close to the water at Scenic State Park

With six lakes, Scenic State Park offers a variety of opportunities to get close to the water.

The park’s beach has a nice strip of sand and still, clear water. It looks like a great spot for getting in the water on a hot day. However, it is also a pleasant place to enjoy a view of the lake without getting wet!

As part of the park’s original landscape design, the beach is located near the picnic shelter and amphitheater. There is lots of shade and additional picnic tables and benches make this a good spot to relax.

Scenic State Park also has several boardwalks and docks for fishing or just enjoying the lake. Those are on my list to test out the next time I visit!

Above the water on the Chase Point Trail

And it was clear from the trail map that the Chase Point trail – a narrow finger that pokes up between two lakes – would provide plenty of views of the water.

So, instead of taking the recommended trail, we headed out to Chase Point. 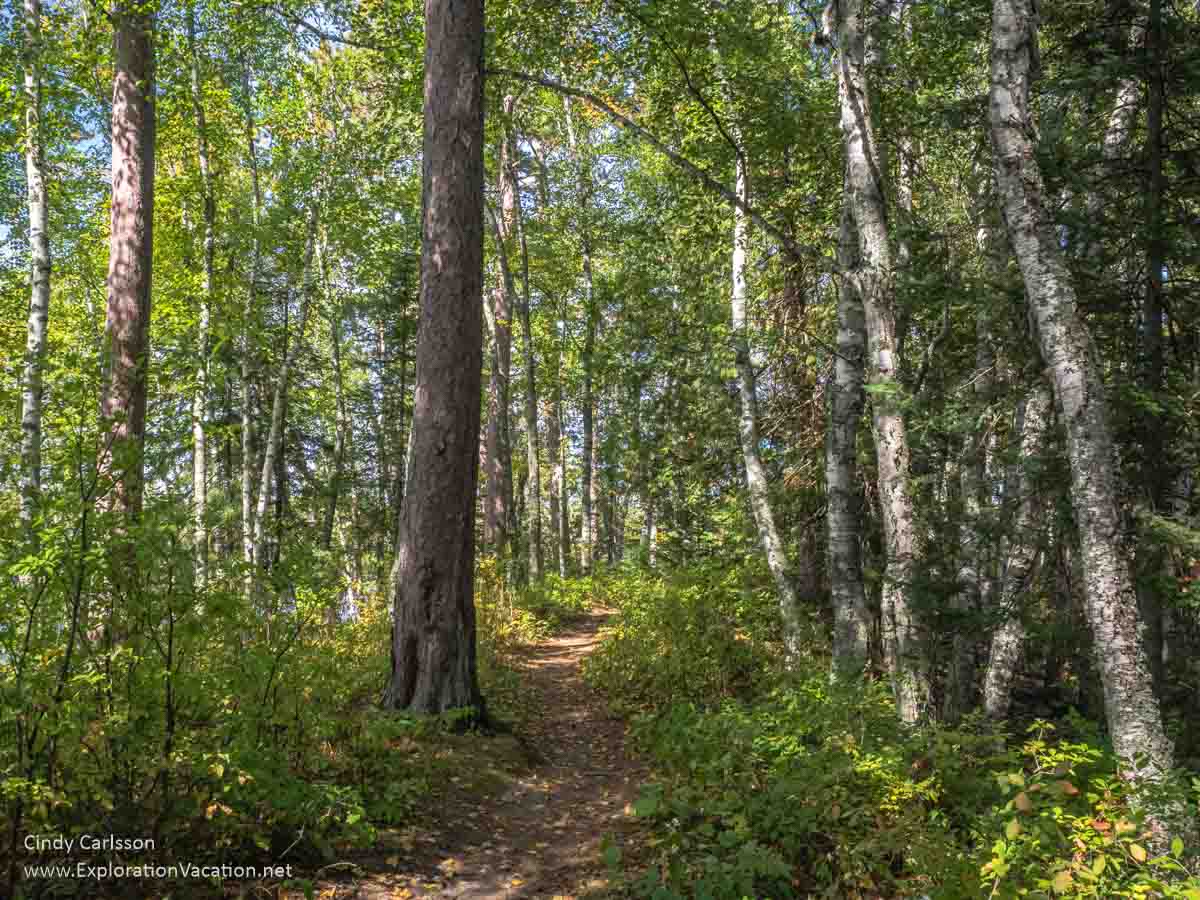 Although the Chase Point Trail is high above the lake today, this was once a river channel flowing beneath a glacier. Known as an esker, this stony ridge was left high and dry when the glaciers retreated.

Like much of the park, the trail is heavily forested with birch and pine. 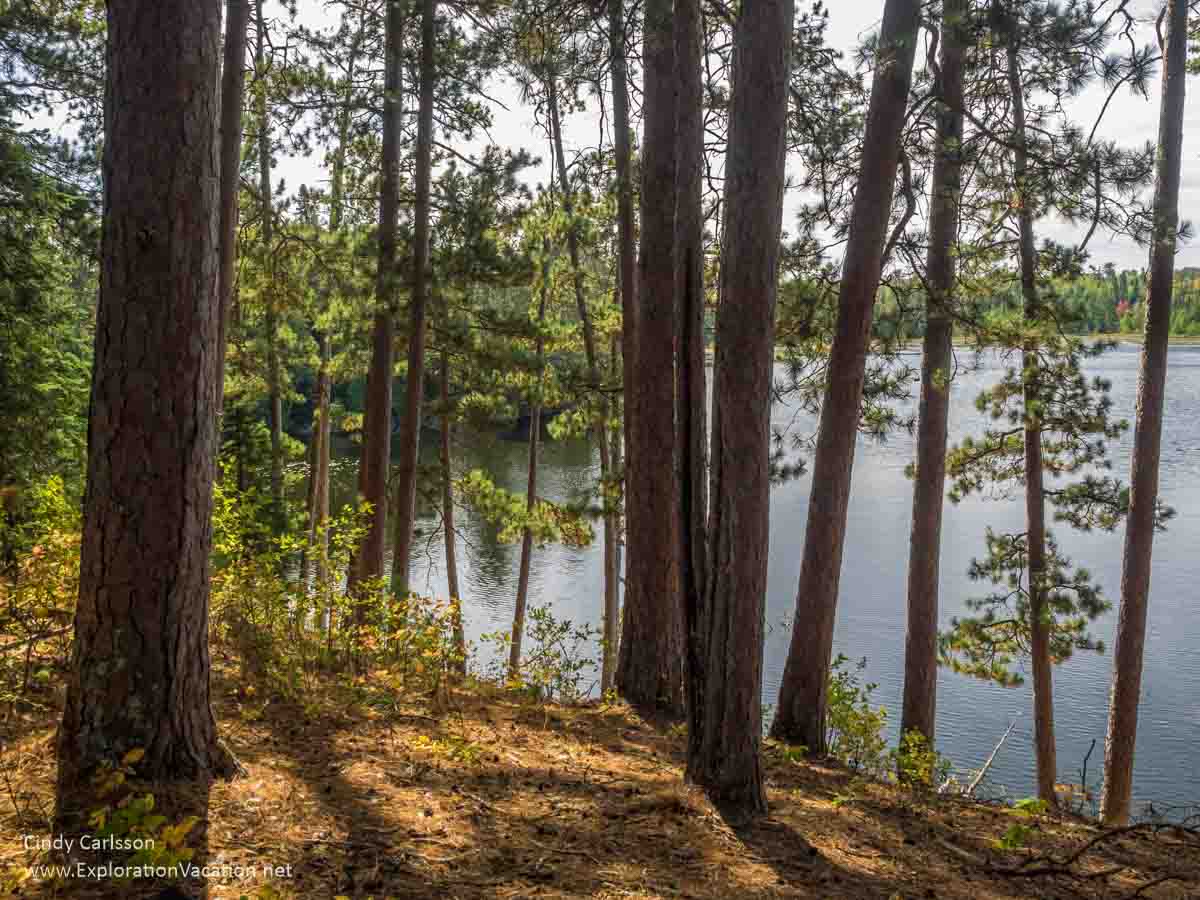 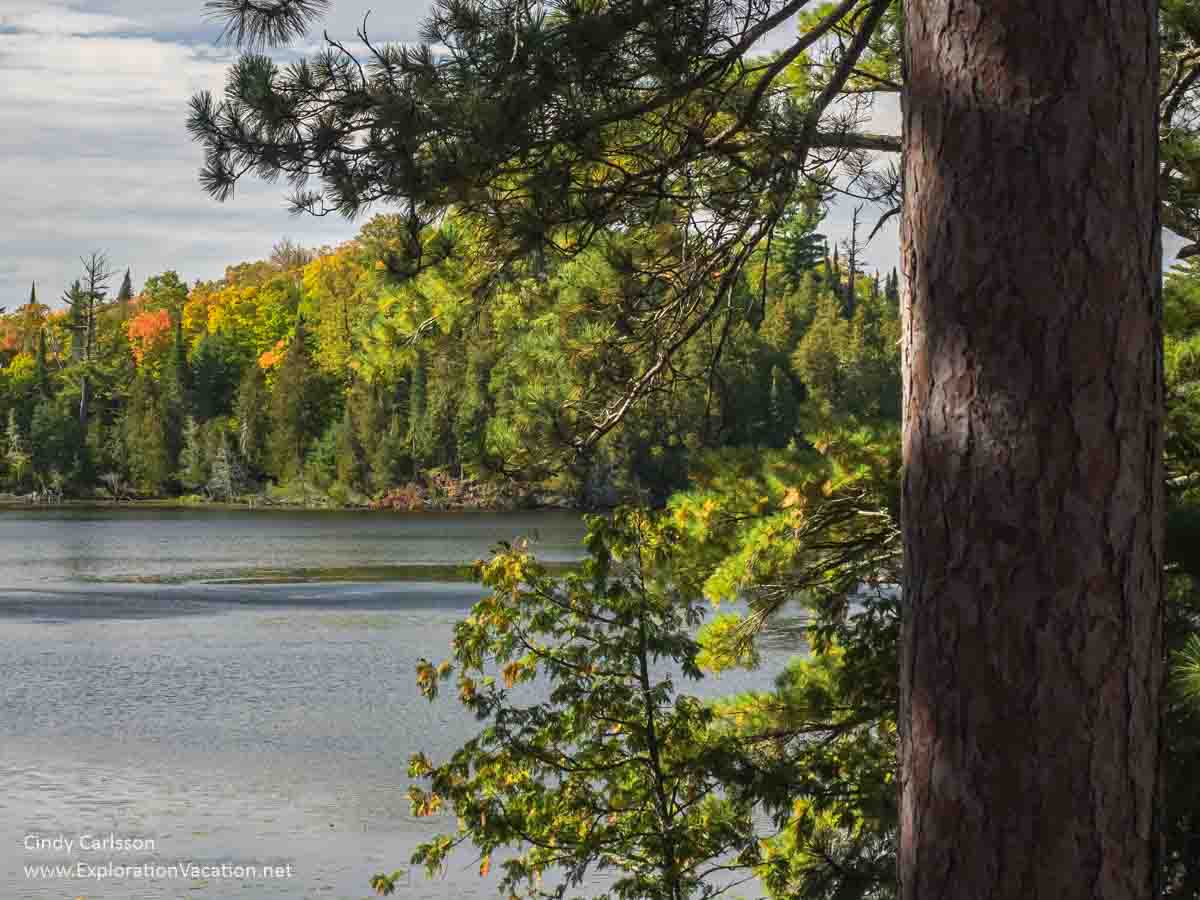 However, this exposed rocky ridge is a tough place to live and the effects of recent windstorms are all around us as we move farther out toward the point.

We can’t actually get out to the point, as a reconstruction project blocks access to the water. However, the view is nice from above too. (And, as I write this, the stairs down to the lake are open again. There is also a new boardwalk winds along the edge of the lake.) 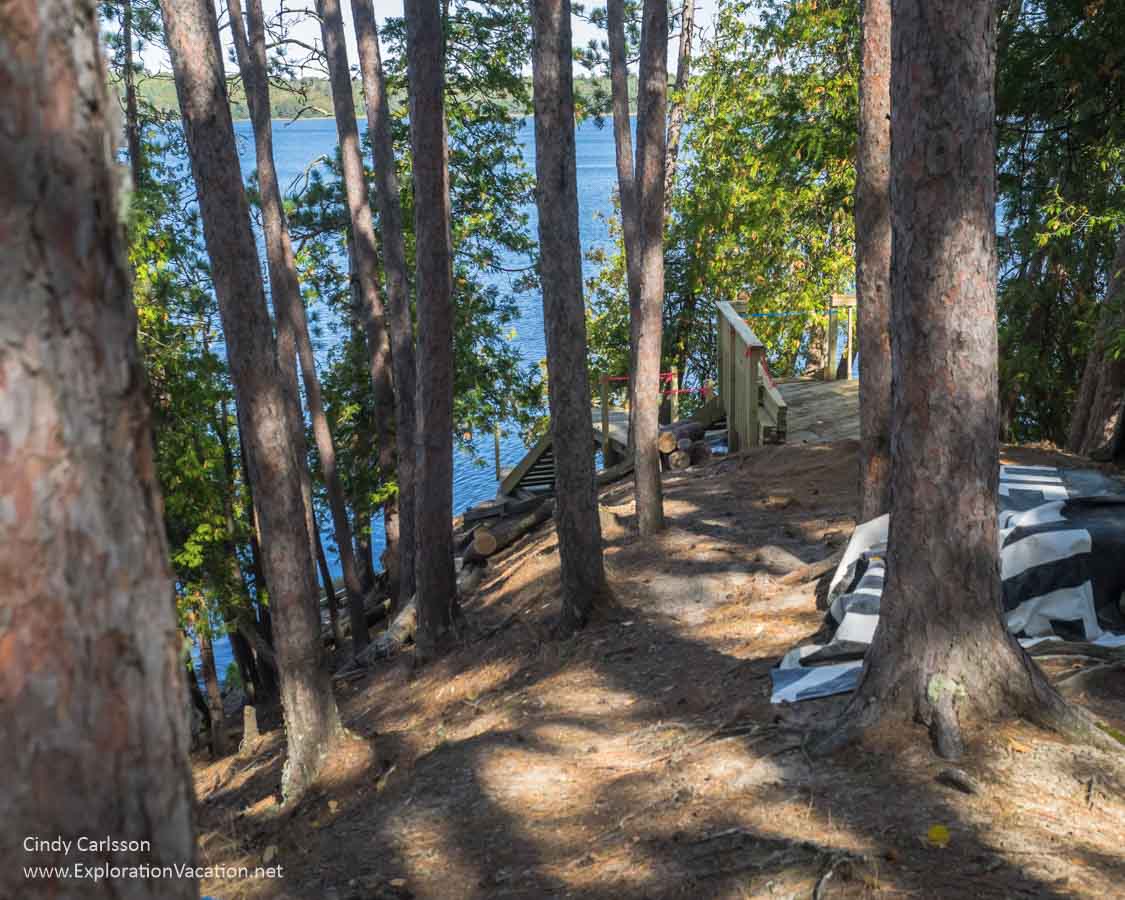 Scenic State Park is located in northern Minnesota’s lake country, just southeast of Bigfork in Itasca County. Grand Rapids is 40 miles to the south and Big Falls is an equal distance to the north. The area is about a four-hour drive from Minneapolis.

There are 14 miles of hiking trails in Scenic State Park. All are easy to moderate.

Both the Tell Lake and Chase Point trails are short (under 2 mile roundtrip) and easy. Interpretative signs along the way explain the park’s geology, history, and wildlife.

Besides the beach, the park has a lakeside boardwalk and two fishing piers. There are also two boat landings and several watercraft campsites.

Boats, canoes, paddle boards, and kayaks are available for rent through the park office.

Not a lodge the way we would think of it today, the historic lodge in Scenic State Park is a picnic shelter. As such, it has a fireplace, original tables and benches, artwork, and a few informative displays.

It holds up to 225 people and can be rented for private events.

Camping is available in Scenic State Park from April through November. Park campgrounds include 93 drive-in sites, 21 pull-through sites with electricity, two backpacker sites, five canoe or backpacker sites, a group site for up to 60, and trail access that connects to the nearby Togo horse camp.

Scenic State Park has one camper cabin available near the historic lodge and beach. Like the lodge, the cabin was built by the Civilian Conservation Corps in the 1930s. Unlike many state park cabins, this one has a fireplace and very basic kitchenette.

All lodging in Minnesota State Parks must be booked through the state’s online reservation system.

For visitors interested in a slightly less out-doorsy experience, there are a number of small resorts and rental cabins available in the area. The best selection of hotels and larger resorts will be found in and around Grand Rapids. Find the best deal, compare prices, and read what other travelers have to say at TripAdvisor. (Affiliate link)

As is true of all Minnesota’s state parks since a recent update, the website for Scenic State Park is light on in-depth information. However, the downloadable park map (PDF) contains a bit more on the park’s amenities, resources, history, and geology.

Within the park, signs provide context for the park’s features, natural resources, and history.