Established in 1579, Lithuania’s Vilnius University is among Europe’s oldest universities. It is also one of a very small number where the historic campus remains largely intact. This makes it a wonderful place to explore.

The frescoes of Littera

Step inside the bookstore Littera for a moment

One obvious place to begin exploring the historic campus of Vilnius University is Littera bookstore. Not because there is a lot of must-have tourist information available at Littera (this is a campus bookstore with popular literature in Lithuanian, scientific books, books authored by university faculty, and university souvenirs), but because it creates an immediate connection to the university’s past.

Littera bookstore itself is rather small, and dark wood and rows of books make it feel even smaller. It is cozy. Or rather, Littera would be cozy if not for the jumble of figures floating just overhead. 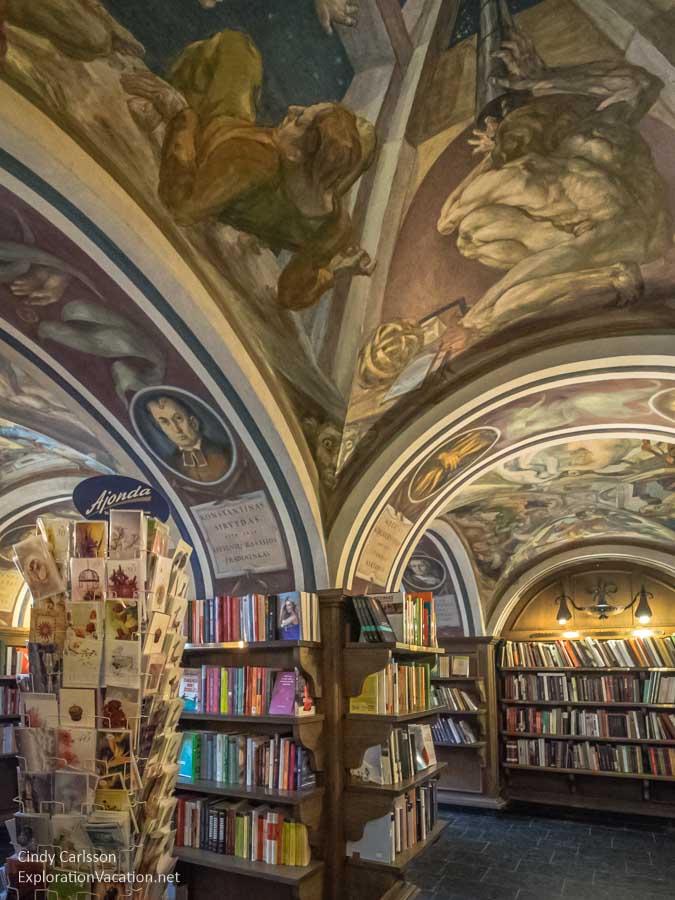 Although the vaulted ceilings are not themselves very large, the frescoes that fill them expand the room outward, upward, and into the past. 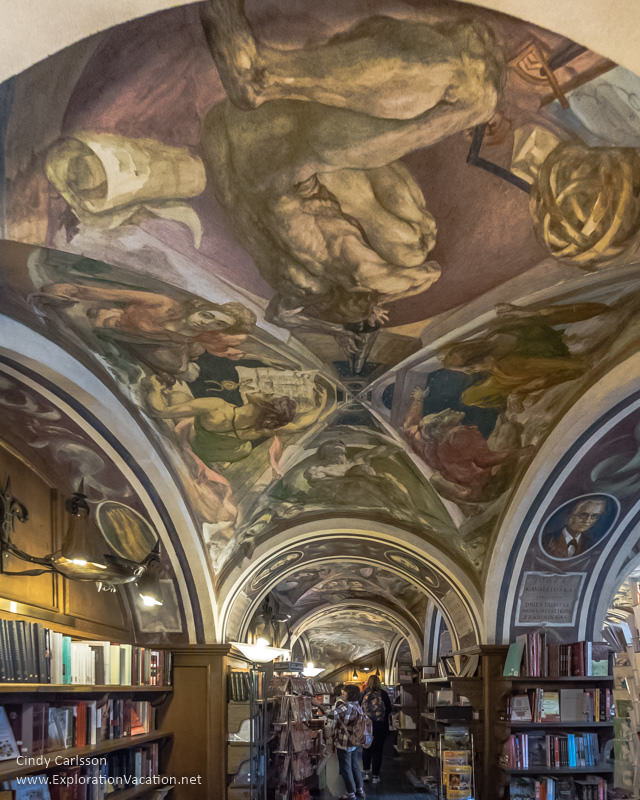 Lithuanian artist Antanas Kmieliauskas created Littera’s sprawling frescoes in 1978 for the 400th anniversary of the founding of Vilnius University. His work was part of a larger project intended to use the university’s interior spaces – which were no longer in their original form – to reflect the university’s history.

In Littera, Kmieliauskas created a series of scenes representing the university’s historic areas of study, which include astronomy, medicine, botany, music, and art. Each scene includes symbols of the discipline depicted, an allegorical figure, and what seem to be stylized representations of actual professors and students – all of which appear to be slowly drifting toward the top of the vaulted ceiling.

Kmieliauskas also “hung” portraits of famous university professors, alumni, and patrons along the bottom of the arches that support the ceiling.

It’s a lot to take in. But then, there has been a university here for a very long time.

Exploring the frescoes of Vilnius University

The frescoes Antanas Kmieliauskas created for Littera are just one of works created by various artists to celebrate the 400th anniversary of Vilnius University. Just next door and up the stairs, Aisciai Hall features “The Seasons” by Petras Repšys. (Although these are also frescoes, they are very different in  style.) There are also two halls with frescoes included in the university library tour (advance registration required). Other areas  with frescoes are not open to the public.

The historic Vilnius University campus is located in the old town area of Vilnius, Lithuania. The campus grounds and buildings are open to visitors on a limited basis. (A portion of the campus and a few buildings are open during certain hours.) There is a small charge to enter the grounds. There is an additional charge to take in the view from the campanile of St. John’s Church, which is only open between April and October. Tours of the historic library are also available for a small charge and must be booked in advance.

Vilnius University is a popular tourist destination in the heavily-touristed old town. Expect crowds whenever you visit, especially in small spaces like Littera. And, while you are there, take the time to buy a souvenir in Littera as an extra thank you for sharing this space with the public.

4 thoughts on “A frescoed history at Littera bookstore, Vilnius University”