The Renwick Gallery features contemporary American craft and decorative arts from the Smithsonian collections, exhibiting “the most exciting works by artists exploring traditional and innovative approaches to making, emphasizing craft as an approach to living differently in the modern world.” The gallery has a fabulous collection and there is always plenty to see here, but right now visitors can catch some wonderful new (and mostly temporary) exhibits.

After being closed for two years while the galleries were redesigned, the museum recently reopened with a new installation of pieces both familiar and new from the museum’s permanent collection.

Unlike the other shows highlighted here, this one will remain on display for the foreseeable future.

This year’s Renwick Gallery Invitational (on exhibit through January 16, 2017) features the work of four very different artists who share a fascination with transformation, ruin, and rebirth.

I was amazed by the ways she manipulates bone, including curing it to make it soft and pliable, to transform it into softly glowing works of art with the look of ivory. It’s amazing work.

Norwood Viviano, a sculptural artist working primarily in glass. His subject matter is untraditional, as he uses glass to explore and visualize the rise and fall of cities, turning changes in population, industry, land use, and more into art that is equally beautiful and intriguing.

Land use planners everywhere should be in awe of his ability to transform data into art that tells a story.

Kristen Morgin transforms raw, unfired clay into bits of old-fashioned Americana. Two separate approaches are included in the show: clay objects so lifelike they are can be mistaken for antique store finds and rough clay sculptures that appear to be in an advanced stage of decay.

Steven Young Lee is a clay artist working in a mixed Eastern and Western tradition. While he creates very nice classic pottery, he’s noted for his “ruined” vessels – pieces which are intentionally designed to appear damaged.

As a bonus for visitors this winter, a massive but ethereal sculpture by Janet Echelman remains on display in the Grand Salon through spring 2017. The work is named for the 1.8 microseconds taken from the length of the day when the 2011 Tohoku earthquake and tsunami hit Japan. The drape of the hand-woven net (made from 51 miles of twine) and the pattern in the carpet below (created from discarded fishing nets) are inspired by data points that show the Tsunami’s movement across the Pacific Ocean. 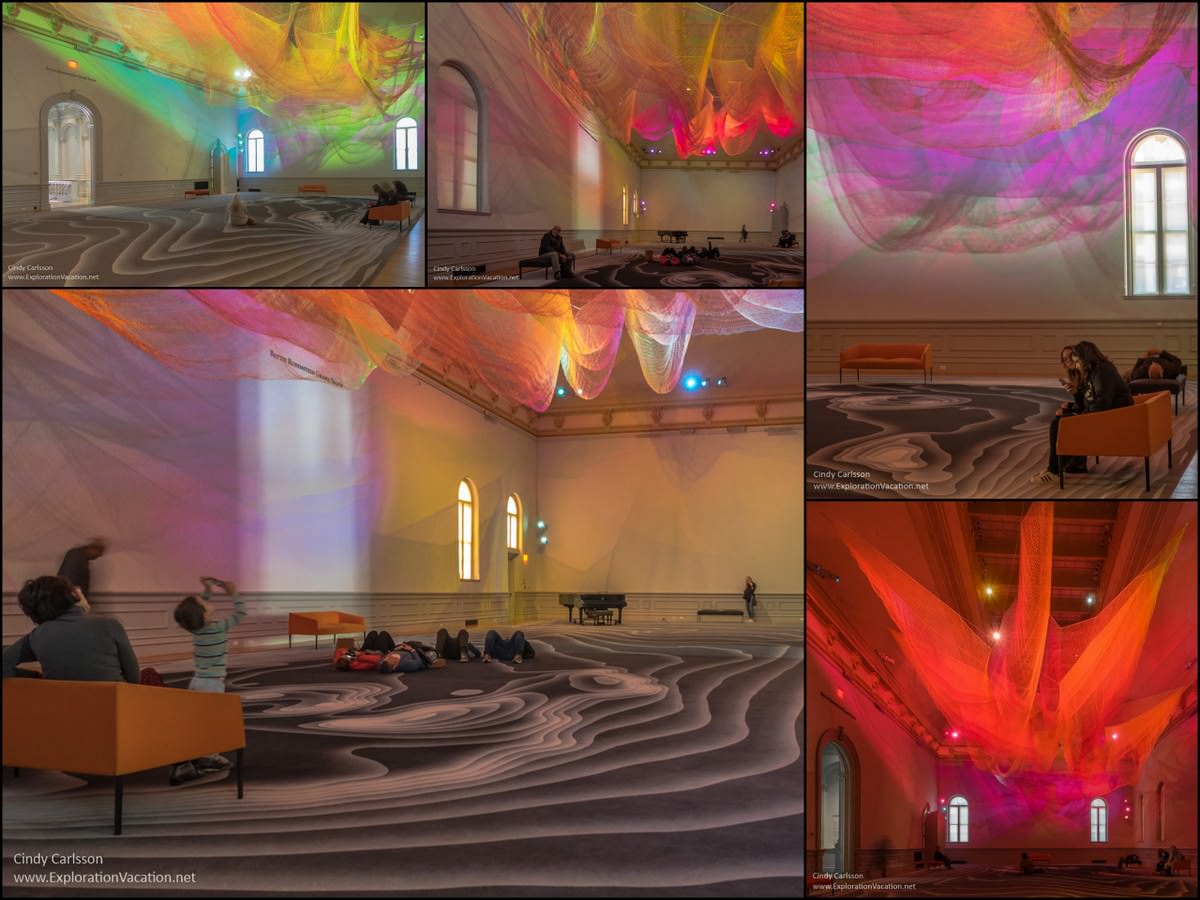 Despite the devastating event that inspired it, watching the shifting patterns of colored light move across the netting is sure to induce a Zen state in even the most frenzied and stressed of visitors. It’s absolutely mesmerizing.

Fortunately, visitors are welcome to lie on the floor and watch the moving light for as long as they like.

The Renwick Gallery is part of the Smithsonian and, as such, is open daily without an admission charge. The gallery is located behind the White House just off the National Mall.

For other shows in DC right now, see:

Land use art by Norwood Viviano