The Franklin Delano Roosevelt Memorial has long been one of my favorite spots in Washington DC, but right now seems like a particularly good time to visit.

We must scrupulously guard the civil rights and civil liberties of all our citizens, whatever their background. We must remember that any oppression, any injustice, any hatred, is a wedge designed to attack our civilization.

FDR is a fascinating president. Controversial in his day and still today, he was a man of contradictions: Born into wealth, he became a hero of the poor and downtrodden. A fierce defender of freedom, he nonetheless ordered the imprisonment of thousands of Japanese-American citizens. Confined to a wheelchair as a result of polio, he led the nation and its allies through a brutal war. In the end, his legacy was tremendous and is still apparent today in the values, institutions, and policies the USA supports at home and around world. 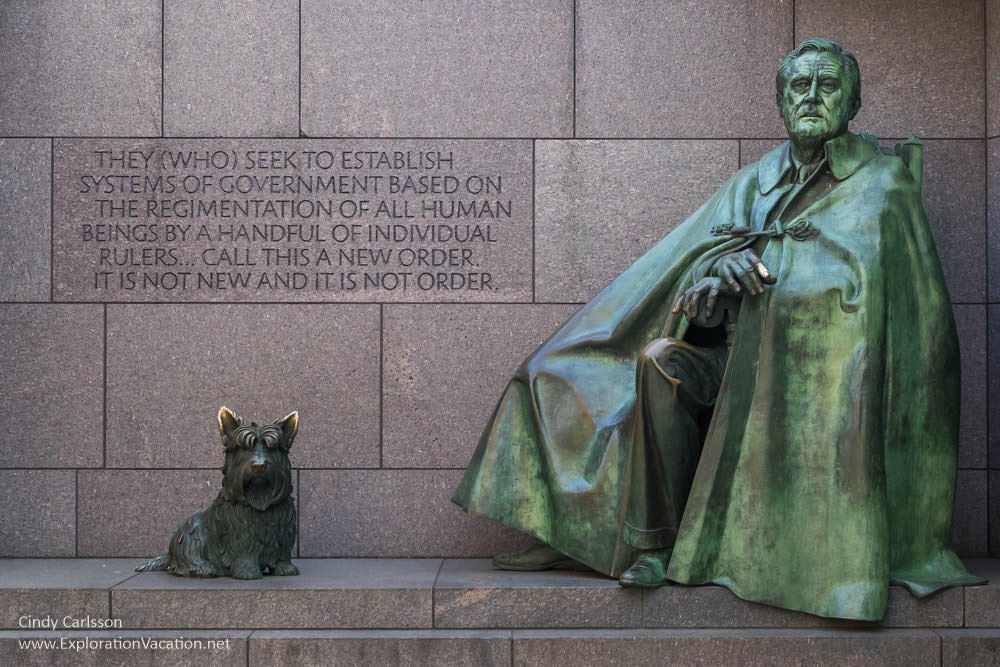 The design of the memorial was also controversial, with land set aside for the project in 1959, but without an approved design until the 1970s. (Consistent with FDR’s stated wishes, a small memorial was placed in the yard outside the National Archives Building in 1965.) Even after a design was approved, it took more than a decade for funding to be made available. The memorial’s groundbreaking didn’t occur until 1991, with the memorial was opened to the public in 1997. However, controversy over the design remained even after its opening. In 2001 a “Prologue” room was added to feature a bronze sculpture that clearly shows FDR in a wheelchair – a depiction that was important to advocates for the disabled, but that FDR would have despised.

Contemplating history at the FDR Memorial

As designed by landscape architect Lawrence Halprin, visitors move through a series of open-air rooms depicting the key events of each of FDR’s four terms in office. The stories of the Great Depression, New Deal, WWII, and the beginnings of peace and prosperity are told through bronze sculptures, quotes from FDR’s speeches and letters, and a variety of water features.

The memorial begins where FDR’s first term in office began, in the early years of the Great Depression.

The only thing we have to fear is fear itself.

The second room focuses on the depression years, with statues depicting bread lines and rural poverty.

I see one-third of a nation ill-housed, ill-clad, ill-nourished. 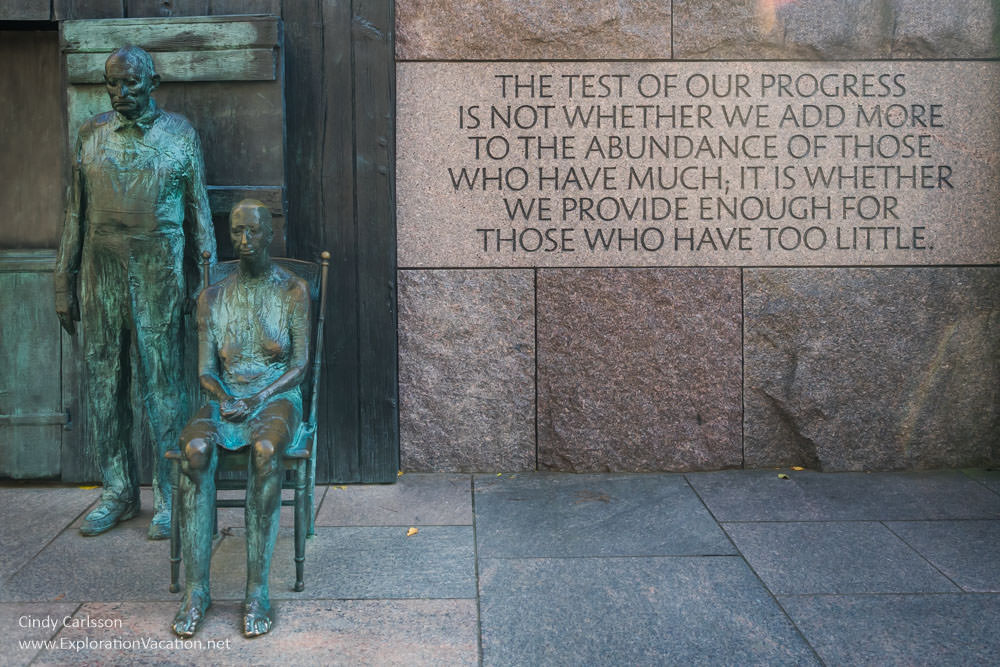 But it also highlights the president’s New Deal, as he enacts programs to put the nation back to work.

I pledge you, I pledge myself, to a New Deal for the American People. 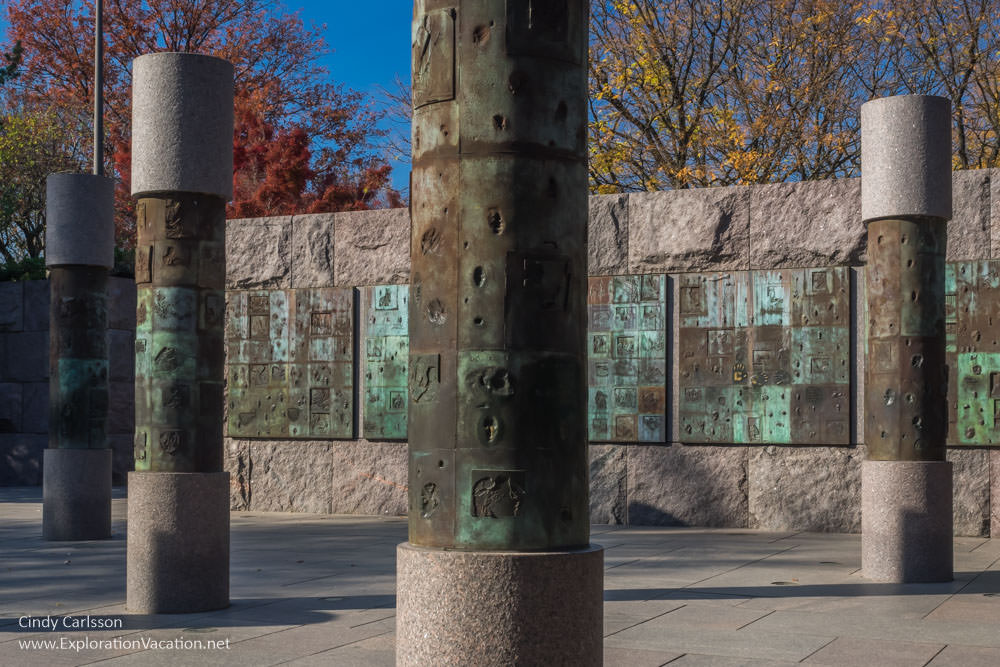 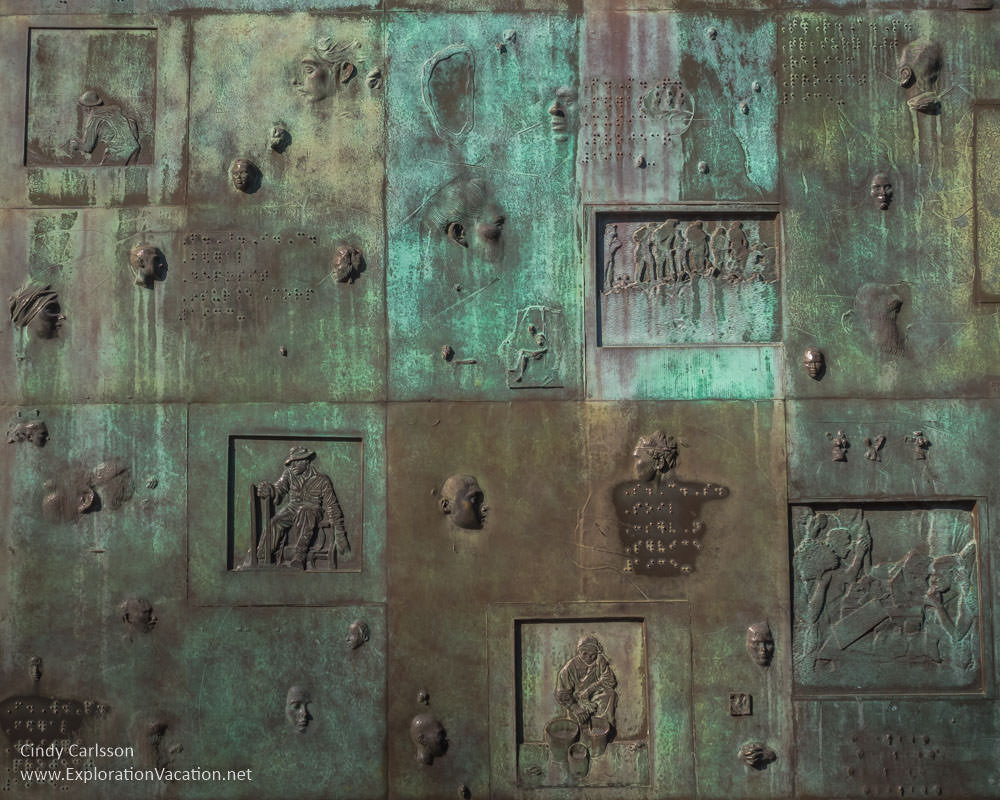 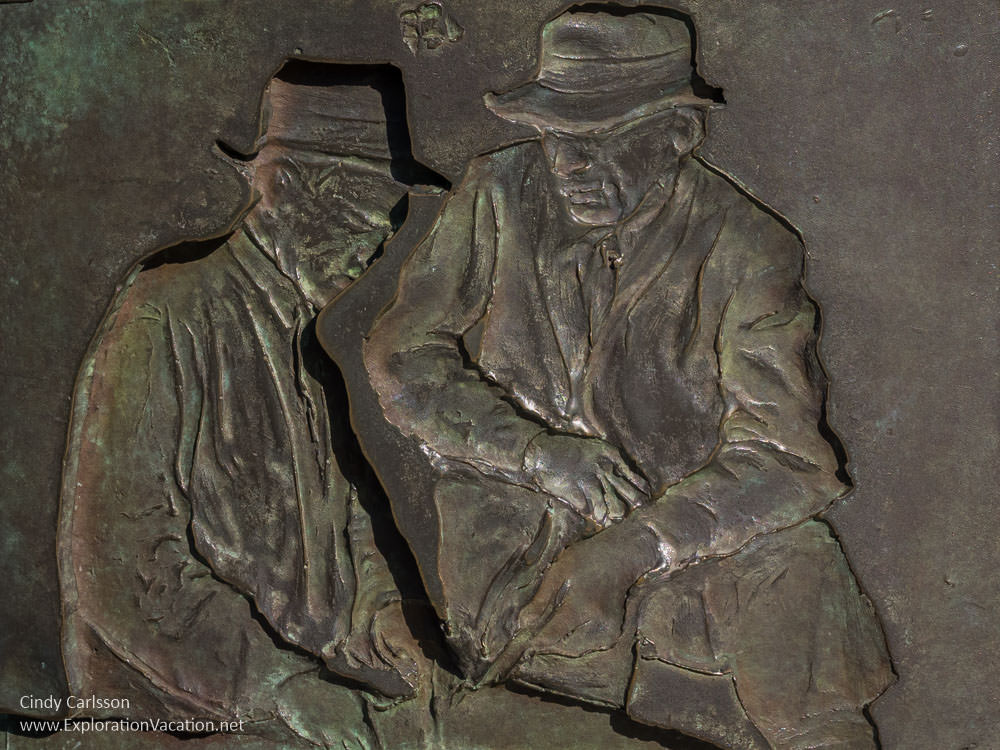 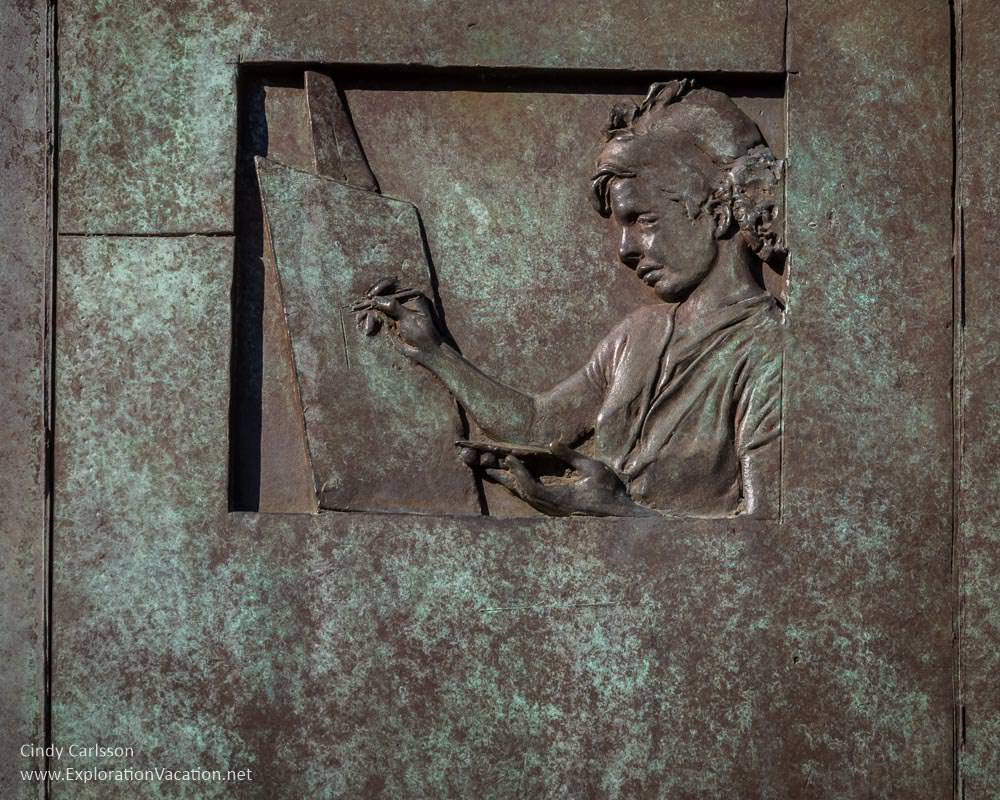 From the New Deal era, visitors move into the war years, where piles of giant rocks and rushing water represent the growing scale of WWII and its horrors.

We must be the great arsenal of democracy. 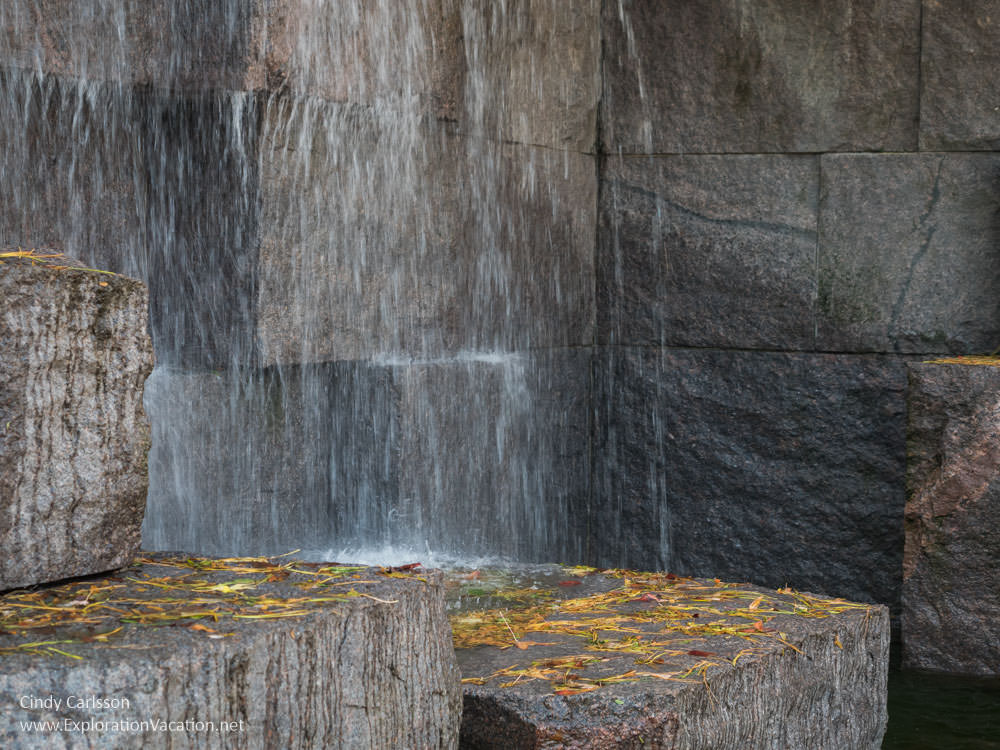 The final room represents the end of FDR’s life and the foundations that were being established to ensure lasting peace.

Unless the peace that follows recognizes that the whole world is one neighborhood and does justice to the whole human race, the germs of another world war will remain as a constant threat to mankind. 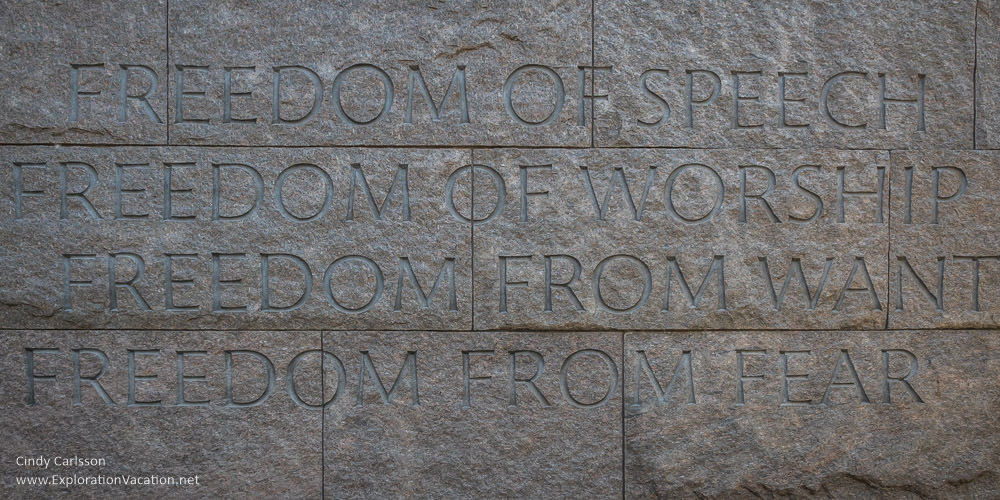 The only limit to our realization of tomorrow will be our doubts of today.

The Franklin Delano Roosevelt Memorial is located south of the National Mall along the Tidal Basin. It’s a bit isolated, but the best time to visit is at night when the rooms open up one at a time and the sound of the water features change as you move through the site. A park ranger is on the site between 8 a.m. and midnight.

The memorial is arranged chronically from north to south, so visitors should begin outside the Visitor Center.

The nearest Metro station is Smithsonian, located about a mile from the memorial. There is some parking near the memorial, but don’t expect to find a spot during busy times of day. For daytime and early evening visits, the DC Circulator’s National Mall route is the easiest way to reach the memorial.

Note that the Park Service has two separate websites (one may be old). What I believe to be the current website has an “info” icon that links to basic information like location and hours. Although there is a “History and Culture” link, it doesn’t have information on FDR, what you will see at the memorial, the memorial’s history and meaning, or the artists who created it. The Guide to the FDR Memorial from the Washington DC by Foot Tour Guide is a better resource for both context and for more complete visitor information.