But it’s a real castle, one that has been part of the lives of Sweden’s royal households for centuries.

The first Swedish king to live at Gripsholm was Gustav Vasa, one of Sweden’s greatest kings.

A shrewd leader and harsh ruler who wrested control of the country from the Danes in the early years of the 1520s, Gustav Vasa went on to establish the first stable government the area had seen for many years.

Once all of that was done, he built Gripsholm Castle.

Although intended as a defensive fortress, this type of castle was already obsolete when construction began in 1537. Instead of serving a military purpose, Gustav Vasa used it as a residence for the royal family and as a symbol of the power and wealth of the newly independent state and the king who liberated it. It’s a display that begins now, as it did then, even before one enters the castle. 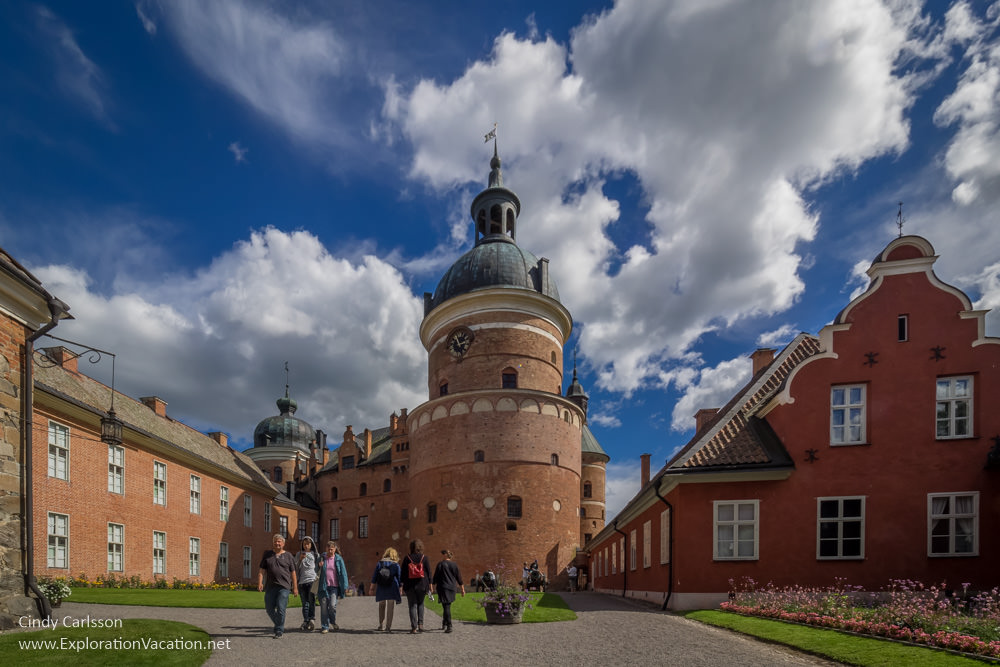 It’s hard to say exactly what the castle looked like when first constructed since it has been altered at various times through the centuries. However, there are places where it is possible to glimpse the castle through the eyes of its earliest inhabitants.

One of those places is the Hall of State, where a portrait of Gustav Vasa presides over the portraits of his contemporaries as it did when the King himself summoned them here to discuss important matters of state.

Although the rows of meeting room chairs detract from the overall ambiance, they are in keeping with the spirit of the room. This is where the King brought together holders of estates, the aristocracy, and foreign dignitaries. It was designed as a meeting room; only the audience has changed over time.

A more atmospheric view of the castle’s early days can be had by peeking into the former stateroom of Duke Karl (who would later become King Charles IX).

These well-preserved quarters still look as they did when the Duke (Gustav Vasa’s youngest son) lived here while the castle was being renovated in the last quarter of the 16th century. 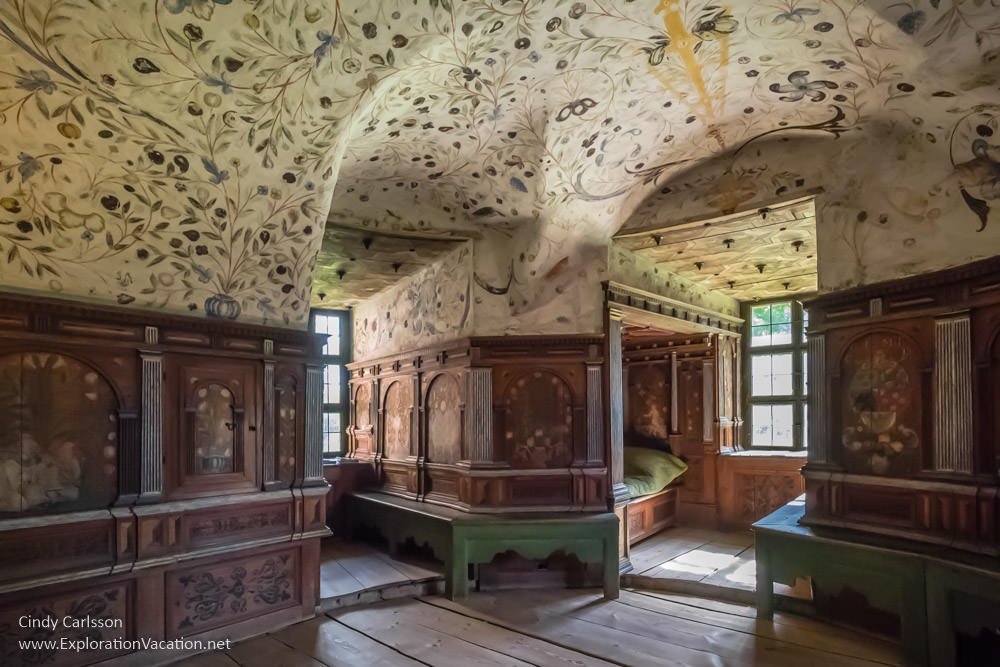 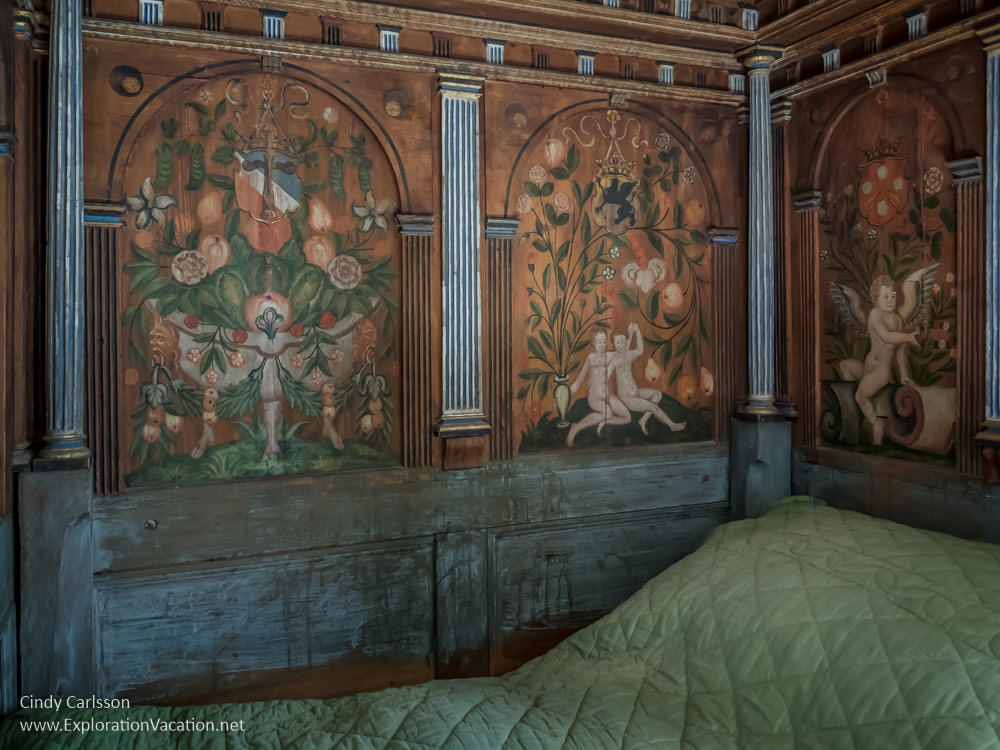 The 17th century brought many modifications to the castle as members of the royal family continued to live in it. Many of these changes, including the construction of a new wing, were completed at the direction of Queen Hedvig Eleonora.

A century later another ruler with a highly developed sense of style remade Gripsholm once again.

The current castle has a few rooms that provide a glimpse of Gripsholm as it looked to King Gustav III and Queen Sophia Magdalena. 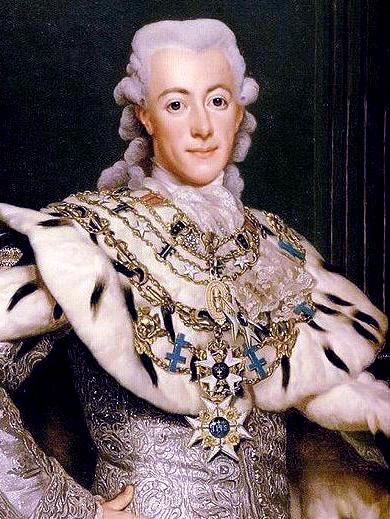 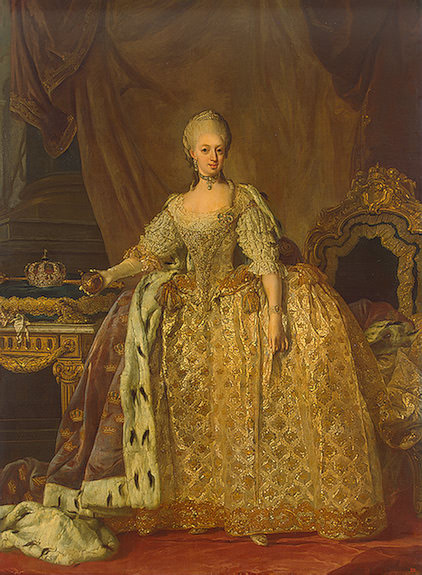 King Gustav III was a man of the Enlightenment and, as such, was accomplished in both politics and the arts. (The Gustavian period, often regarded as the high point of Swedish style, is named for him). At Gripsholm he incorporated his flair for art and entertaining into the structure of the castle itself.

For example, in order to regularly indulge his passion for the performing arts, he had elegant theaters built at both Drottningholm and Gripsholm. At Gripsholm, the theater was built into one of the castle’s round towers. It remains there today, complete with the beautifully painted original stage sets.

He was also behind the creation of the grand White Room or Round Drawing Room, which hints at the light-filled elegance the castle likely had during the his time there. Today the room displays portraits of Gustav III and his contemporaries. 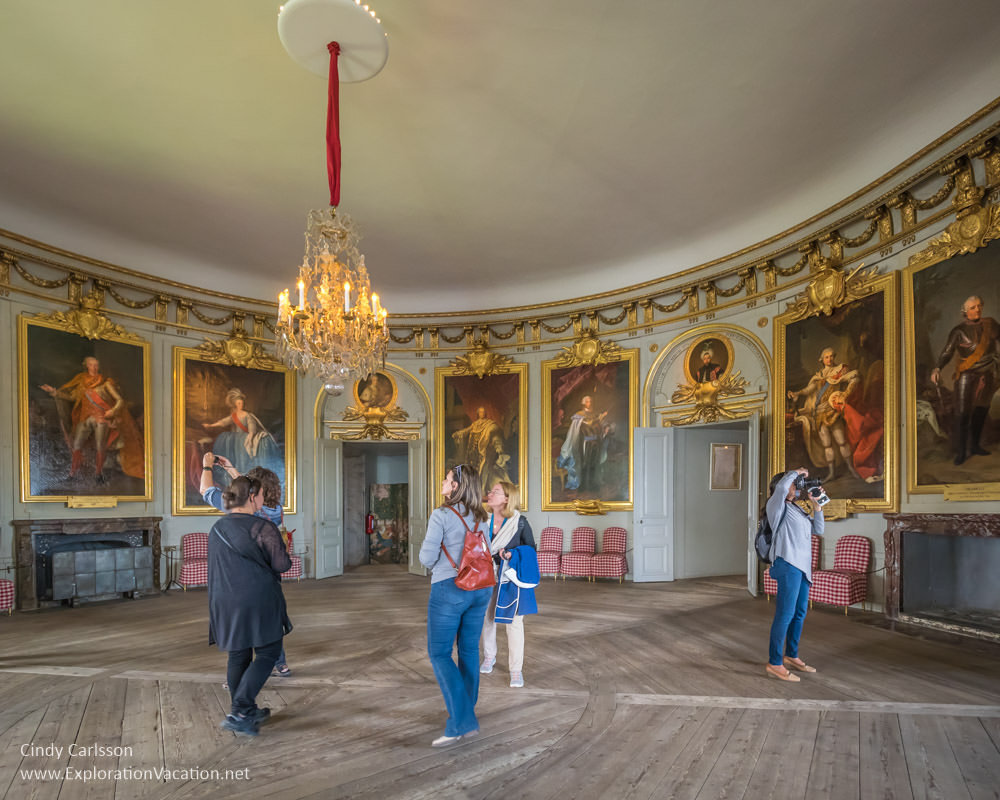 Actually, the whole castle is stuffed with portraits, as Gripsholm serves as both a historical museum and the home of Sweden’s National Portrait Gallery.  These portraits are as much a reason to visit as is the castle itself, as they provide a fascinating look at some of the people who shaped Sweden’s history.

(The castle was “restored” in the 1890s to return it to the Renaissance castle of Gustav Vasa. In doing so, many of the changes made over the centuries, including those of Gustav III, were eliminated. Today much of the castle likely looks older and darker than it did before the renovation.)

And then like any castle, there are rooms that were never intended for public display.

Maintaining the royal family and guests in a castle the size of Gripsholm required a huge staff and, not surprisingly, their quarters were far more humble than those of the royal family. 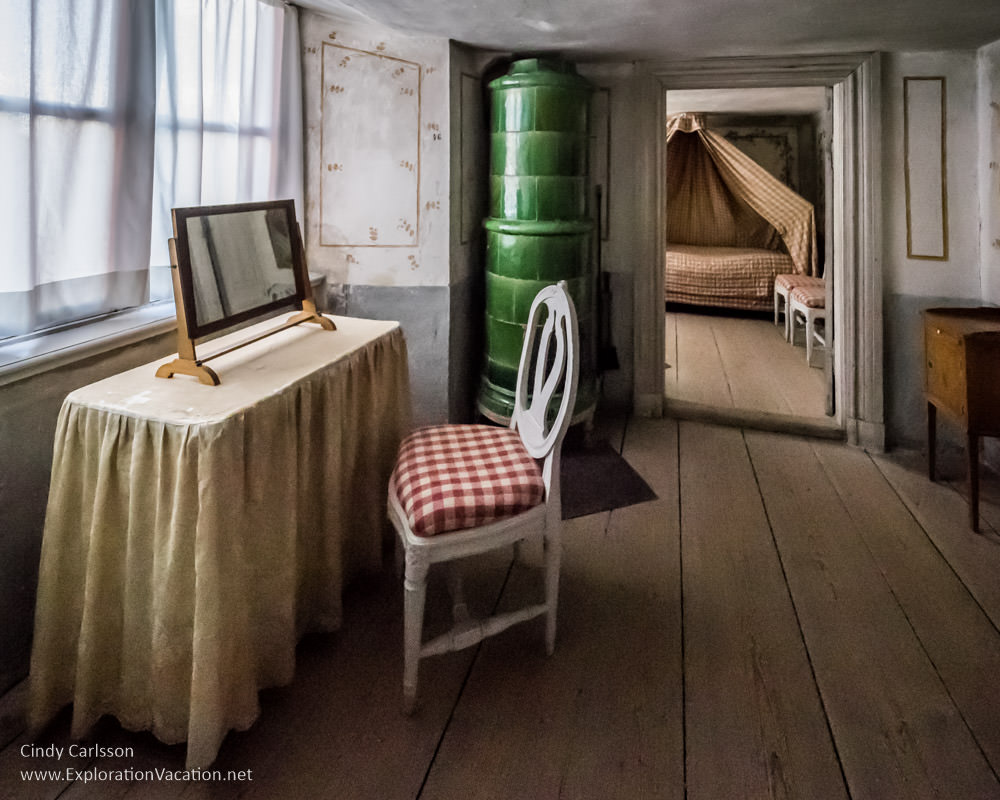 Nor is it surprising that the historical portraits on display generally portray members of the royal family, military leaders, the aristocracy, and foreign dignitaries. (The museum’s collection of modern portraits is far more diverse.) Servants are largely invisible in the portrait collection, as they were in daily life.

Other rooms that would have been hidden from most visitors included the spaces used to hold prisoners.

Gripsholm served as a prison for people of various classes over the years. Among the most prominent of Gripsholm’s prisoners were some of the first to be held there: the future King John III and his wife Catherine Jagellonica, who were held in the castle for about four years by John’s brother, King Eric XIV. 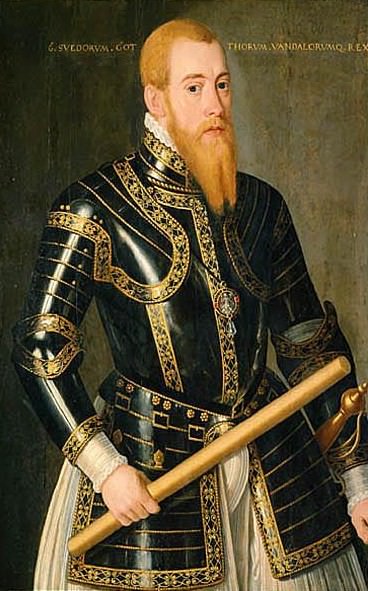 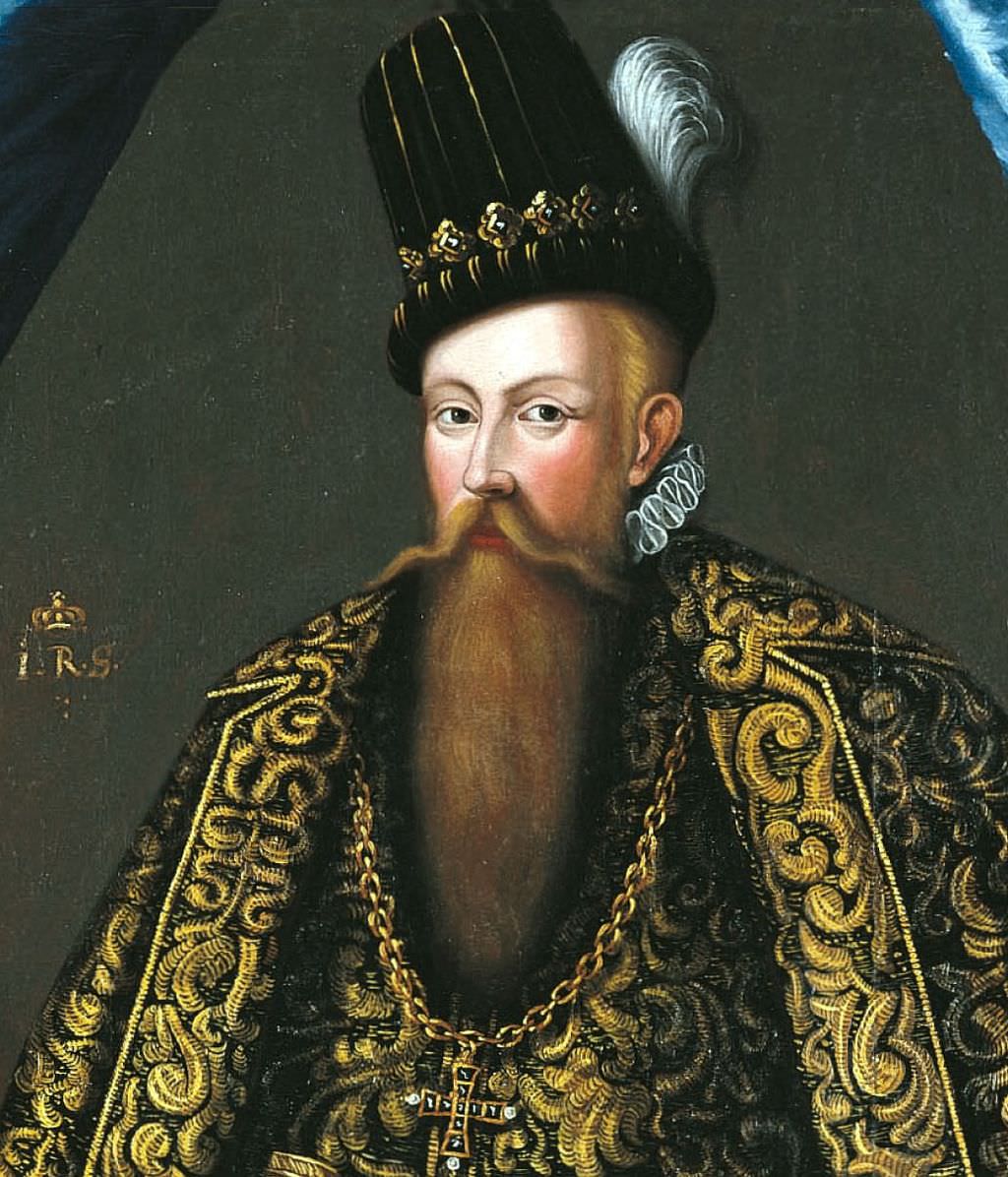 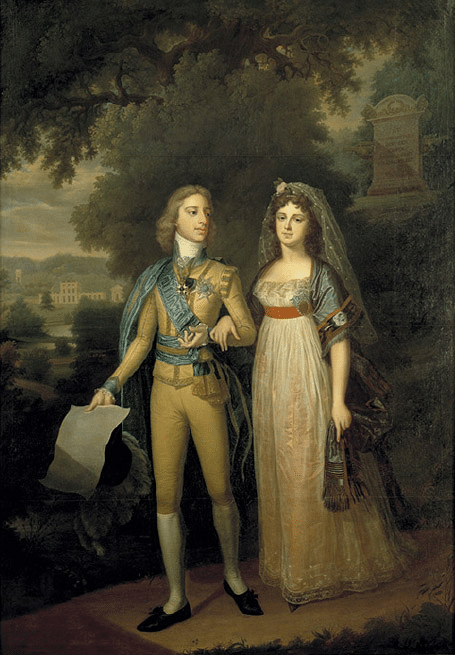 200 years later Gripsholm again held royal prisoners: the newly deposed Gustav IV Adolf and his family. Unlike John and his family, their time as prisoners in Gripsholm was brief, as they were soon transported to Germany to live in exile.

Many others were condemned to Gripsholm as prisoners, especially during the 18th century when that became the castle’s primary use. There are few reminders of their presence today; there are no portraits, only a short poem left by an unknown prisoner who met an unknown fate here.

It is as if the walls themselves have spoken, insisting that portraits only tell part of the castle’s long, complicated story.

Gripsholm Castle sits on the shore of Lake Mälaren in the charming town of Mariefred. Only 45 miles from Stockholm, it’s an easy drive or a relaxing three-hour journey by boat. (Drottningholm Palace is also located on Lake Mälaren, allowing an easy multi-castle tour.)

The castle serves as both a historical museum and the home of Sweden’s National Portrait Gallery. It’s open to the public daily during the summer and less frequently during the rest of the year. An admission fee is charged, with ticket available on a walk-up basis.

I visited Gripsholm on a private group tour as a guest of VisitSweden and VisitSörmland, and thank them and the staff at Gripsholm for their hospitality and wonderful stories.