Northern Vietnam is a country of ragged karst mountains and twisting caverns. The most famous of these are found in Halong Bay, but they exist inland as well. And in some places they exist in a space that isn’t clearly land or water.

Welcome to Trang An.

Located about an hour out of Hanoi, Trang An is famous for karst peaks that rise up out of flooded valleys. It is often referred to as Halong Bay on land.

While not well-known outside the country, the UNESCO world heritage landscape of Trang An is a popular place for a weekend outing for the Vietnamese living in Hanoi. It’s so popular that many couples have wedding photos taken here. 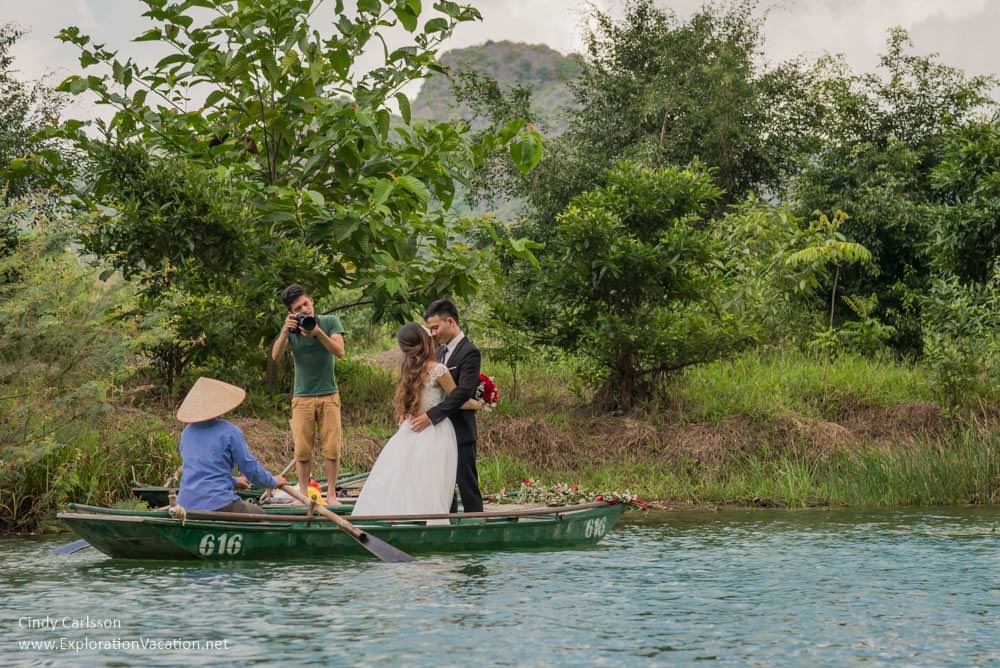 There are a two major tourist entry points. The most well-known and busiest (at least for the time being) is Tam Coc (Three Caves) where boat tours follow the Ngo Dong River through rice fields and steep karst peaks. The other area (the one we visited) is called the Trang An Grotto Eco-Tourism Complex (often simply called the Trang An Grottoes). It’s a watery world of quiet pools, rice paddies, limestone mountains, twisting caverns, and the occasional pagoda.

It’s possible to arrange private boat tours of the area, but most people, including us, hire a boat and driver (a woman who will row us through the site) at one of these big tourist facilities.

At the dock, our guide left us in the trusty hands of a tiny Vietnamese woman who arranged us in the flat-bottomed sampan before pushing us off the dock and hopping into the back of the boat. 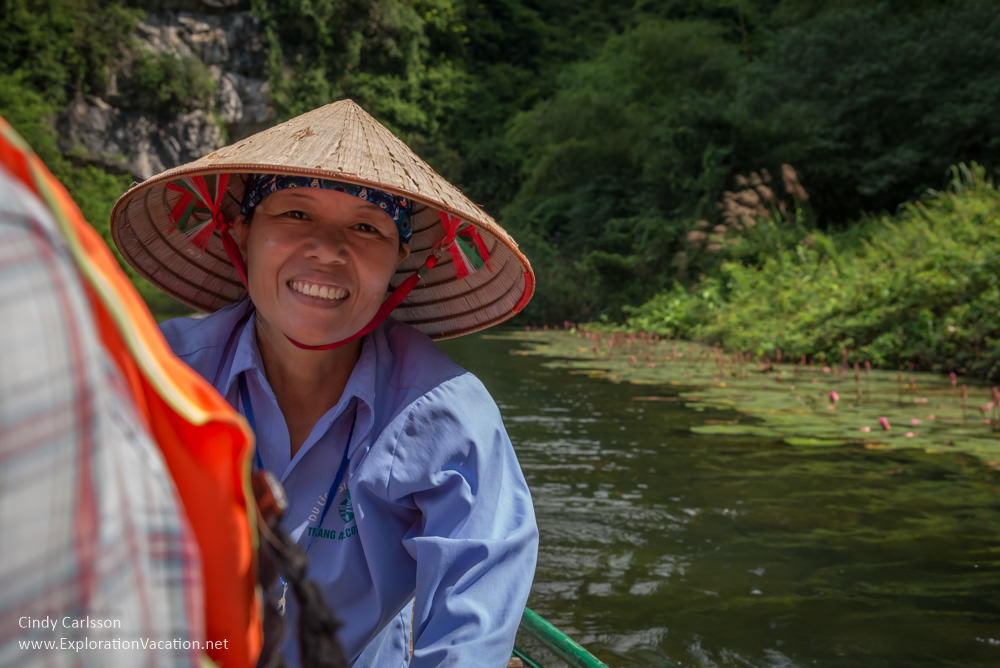 (All of the boats are rowed by women.)

Soon we are in the midst of a flotilla of small rowboats in the middle of a broad river.

We have the misfortune of being here on a Saturday, which is one of the busiest days to visit. It isn’t exactly peaceful, but it isn’t horribly loud and crowded either. The boats themselves are nearly silent, so the only sounds beyond the gentle lapping of the oars in the water are the voices of the other passengers – some of who insist on continually shouting. However, in general, the people-watching makes up for any annoyance over the crowds.

And, once we get going, the crowds thin out. 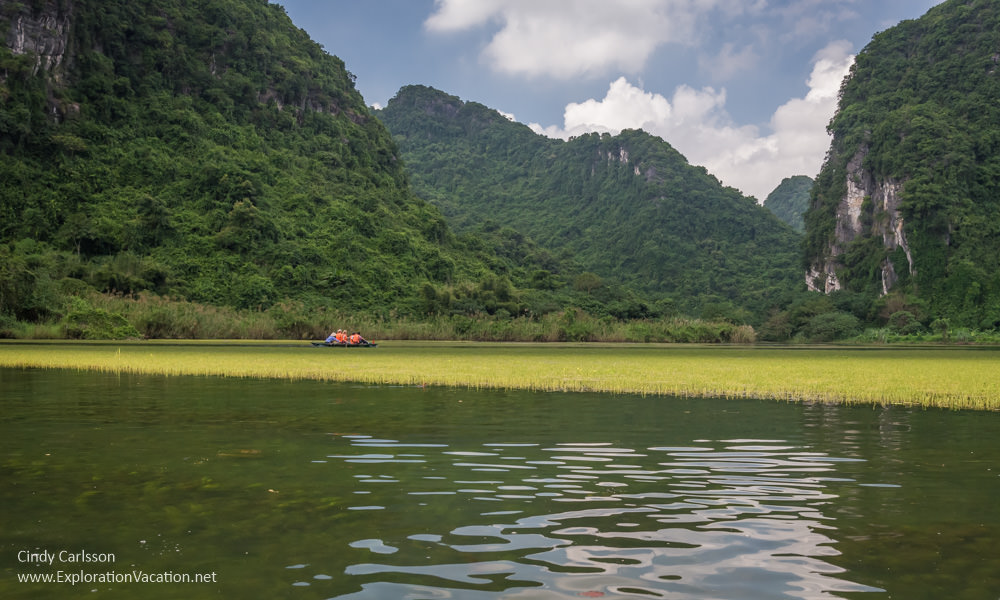 (Each rower has her own pace and not every boat seems to be on the same path.)

As we approach the hills that rise above us like a wall, I suddenly realize that there is a gap in the rock face. 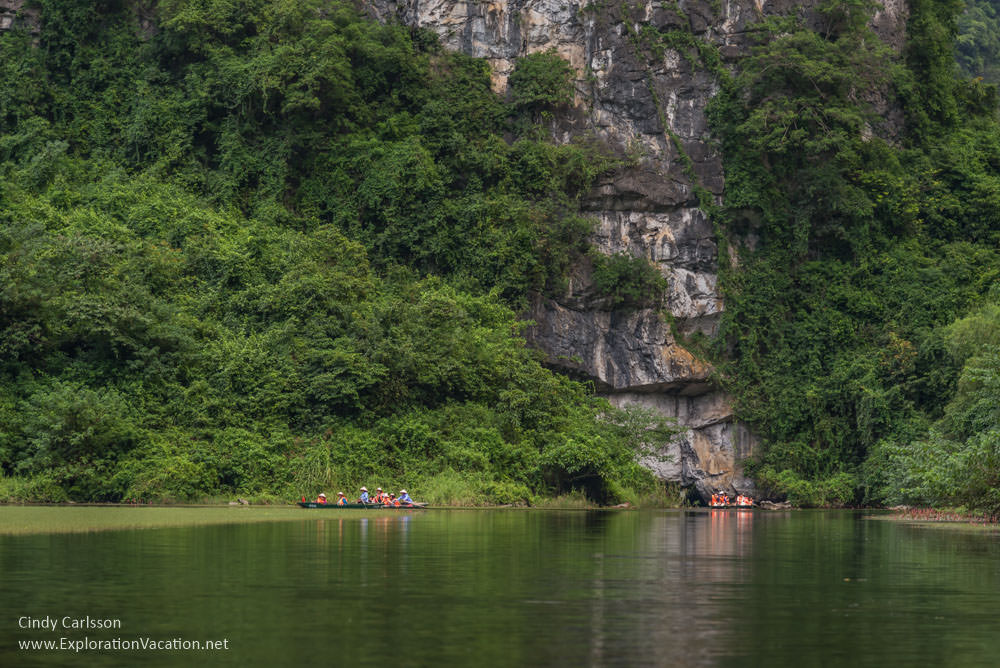 At the direction of our driver, we slide down to the floor of the boat and duck as we slip into the cavern.

The interior is cool and dark, the light from the outside world supplemented on by a few glowing electric bulbs to guide the women who deftly row the boats through.

The way the rock – the mountain itself – hangs just above our heads is both fascinating and a bit frightening.

And then we slide back into a pool of sunshine, the cavern slowly disappearing behind us. 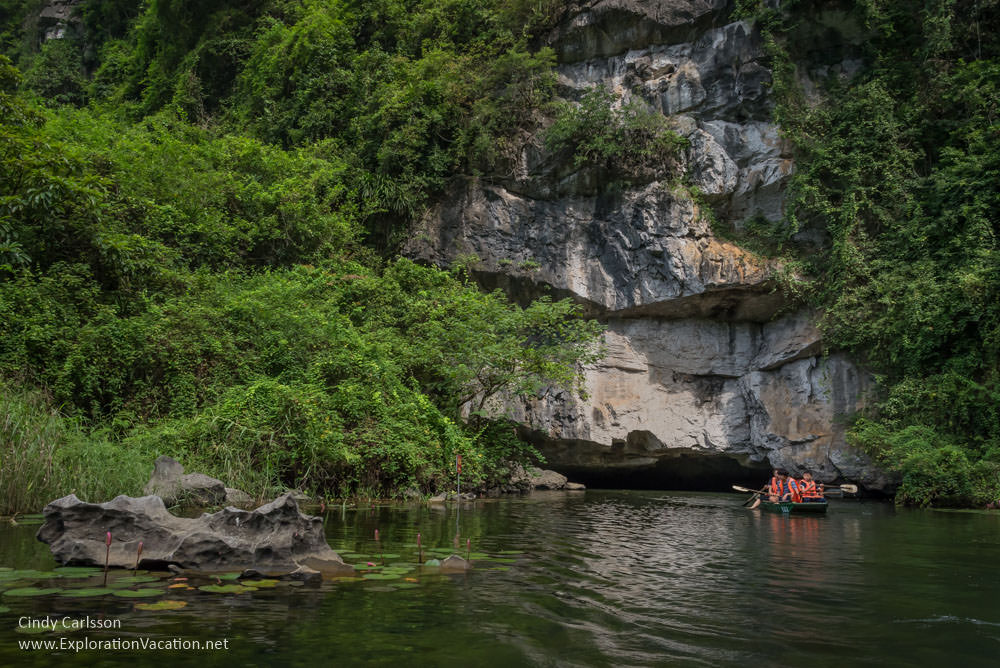 This is only the first of the caves we will encounter. Some caverns will be bigger than others, a few will house shrines, and some will have walls of jagged rock while others are smooth (some of the caverns have been enlarged to allow the boats to pass through). Each is unique, but the experience is essentially the same: the realization that a cavern lies ahead, the glide from the bright heat of the day to the cool darkness of the cave, the bulk of the stone ceiling just overhead, the lovely landscape framed by the cavern’s stony mouth, and finally the feeling of release as we glide back into a world filled with light and color. 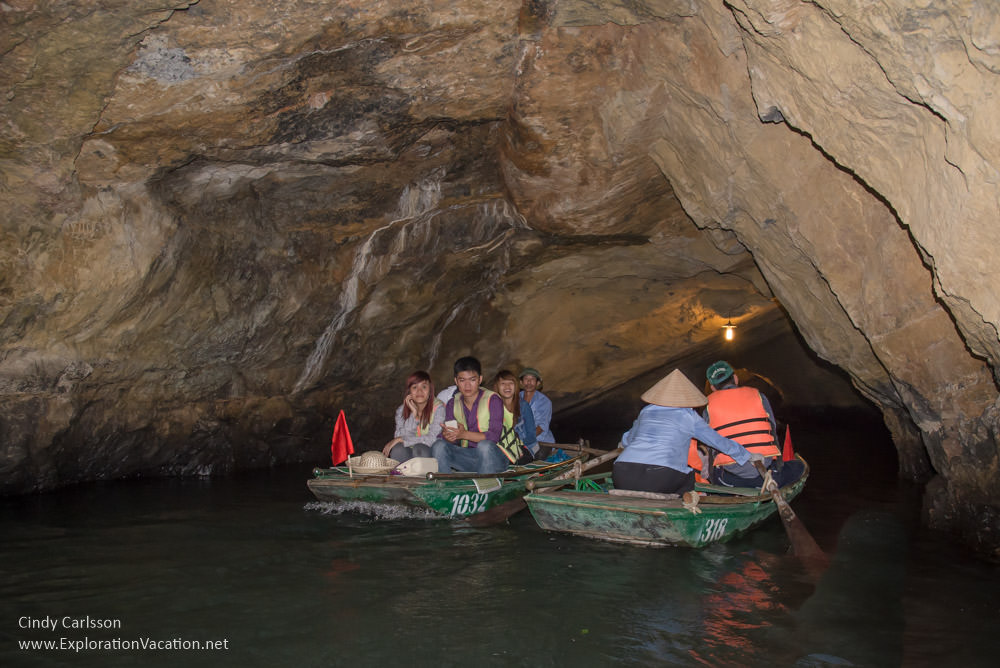 There are also pagodas to explore.

A couple of pagodas are located right along the water and the boats stop at one or both. It gives tourists a chance to visit them, but it also gives the drivers a break from the hard work of rowing the sampan. 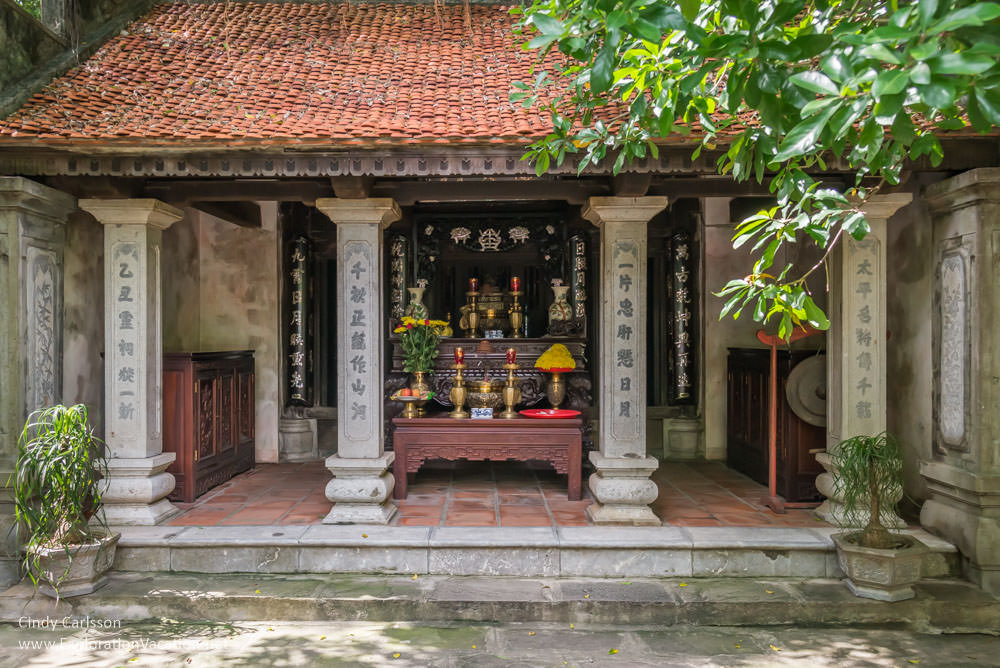 There are other pagodas farther up the hillsides for those with the time and energy to visit them . . . but that’s not us this time.

Instead we content ourselves with views from closer to the water. 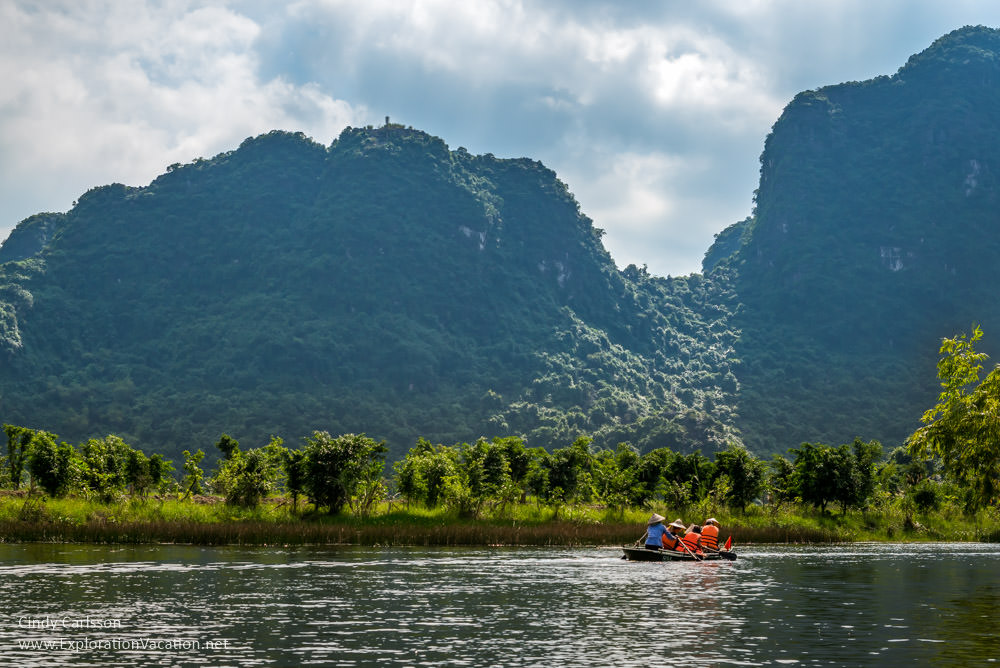 Trang An is located about two hours south of Hanoi in Ninh Binh province. Many tour agents offer day trips from Hanoi, making it an easy tour option. More independent travelers may wish to stay in the Ninh Binh area for a few days and spend more time exploring this beautiful – and less touristy – region of Vietnam. In either case, bring a hat, sunscreen, and water as boat tours last two hours or more with the only relief from the sun coming while traveling through the caverns.