The House and Garden Tours offered by the English Library in Mérida, Mexico, begin with an introduction to the architecture styles found in the Yucatán and a list of the addresses that will be visited. On the day I took the tour last year, we were told our itinerary included an “extra special house.” That got the expats in the group buzzing as they speculated about what house it might be. 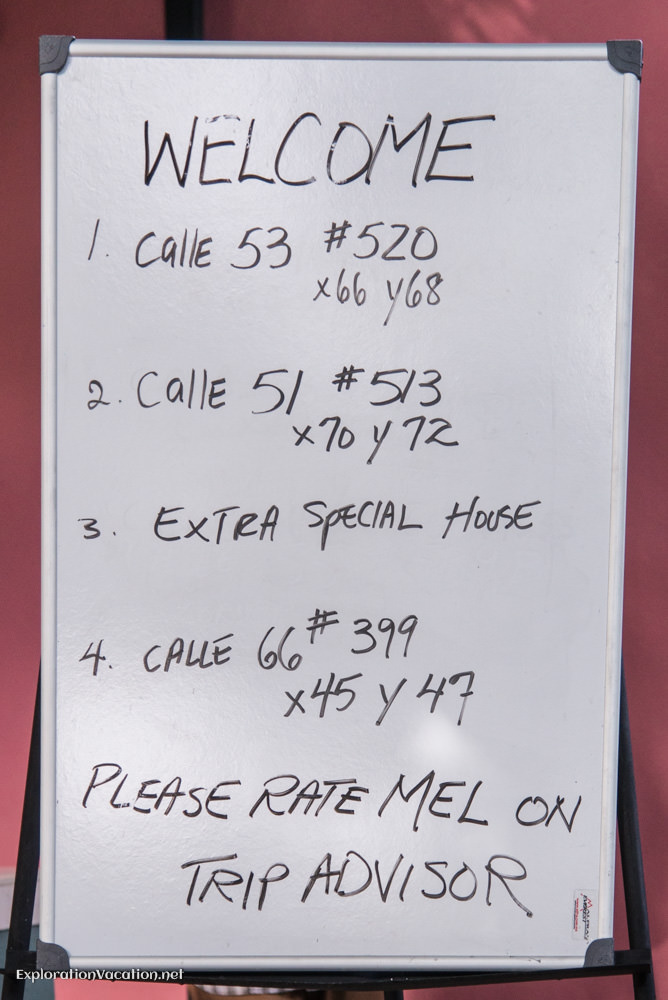 As some people probably guessed/hoped, the “extra special house” was La Calle Escondida, a mansion that has been featured on several TV shows.

It’s easy to see why it gets so much attention; it is large, dramatic, and rather unusual.

This “house” is actually three separate structures linked by courtyards to form a single home. Despite its size, the modest façade along the street is plain, giving no hint of what lies within. It’s a theme that is carried through the front door and into the entryway with its simple stone walls and traditional ceiling. 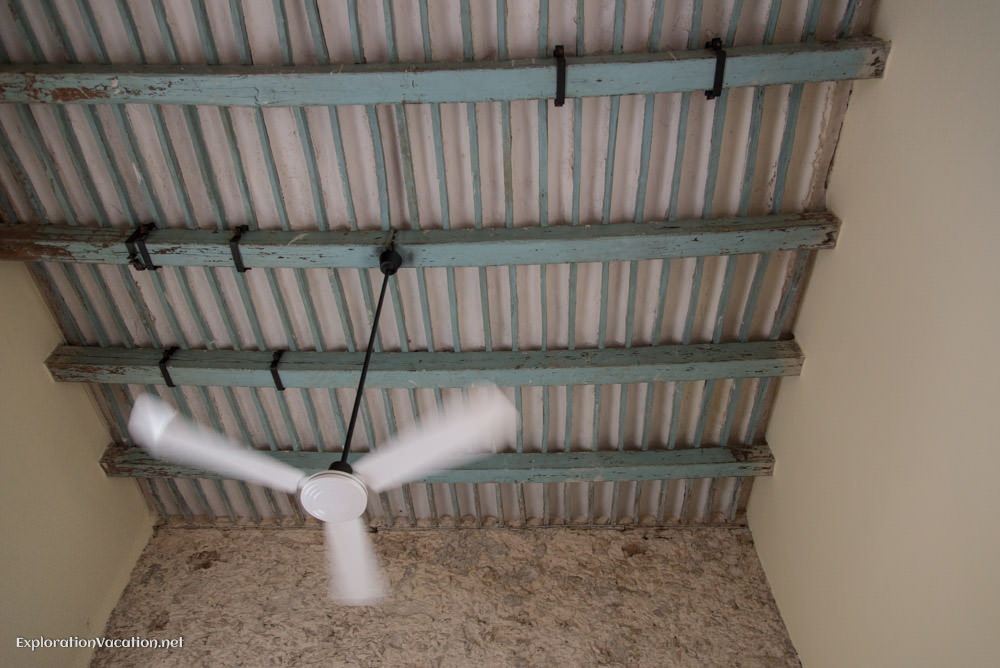 As we enter there is no reason to expect this house will be anything but a typical modern remake of a colonial home . . . until we leave the entryway.

Apparently there are two bedrooms immediately inside the entrance; I never saw them as I was instead irresistibly drawn into a lush courtyard framed by a number of very different façades, including a derelict building. 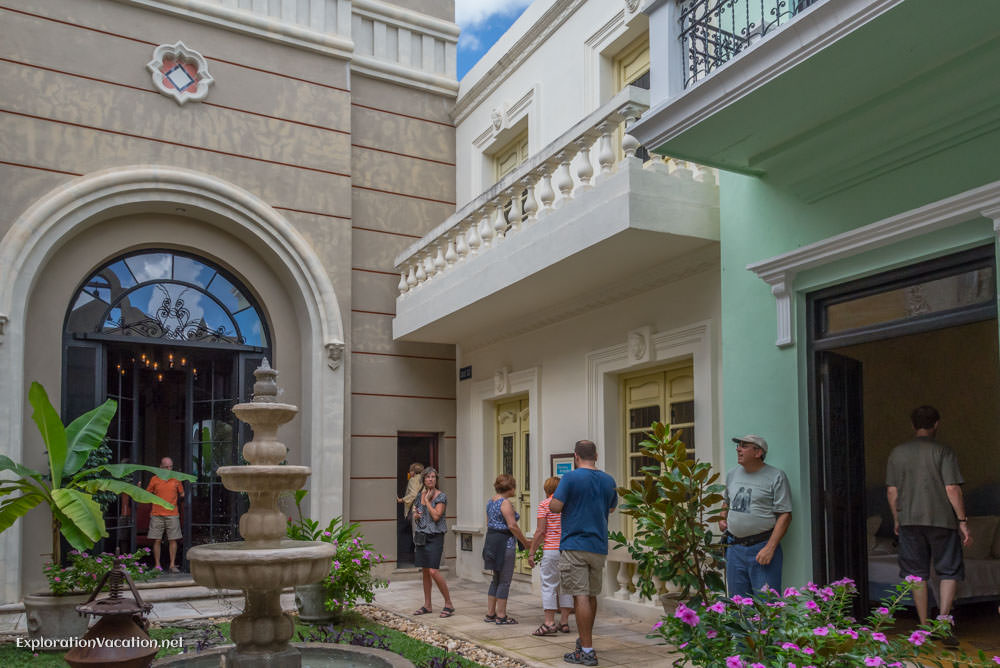 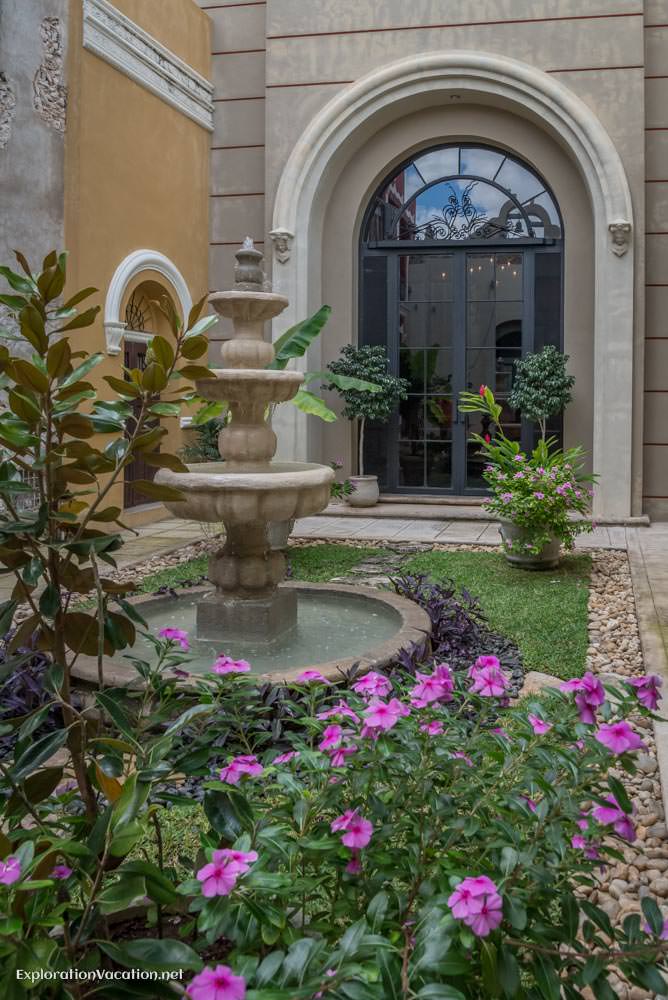 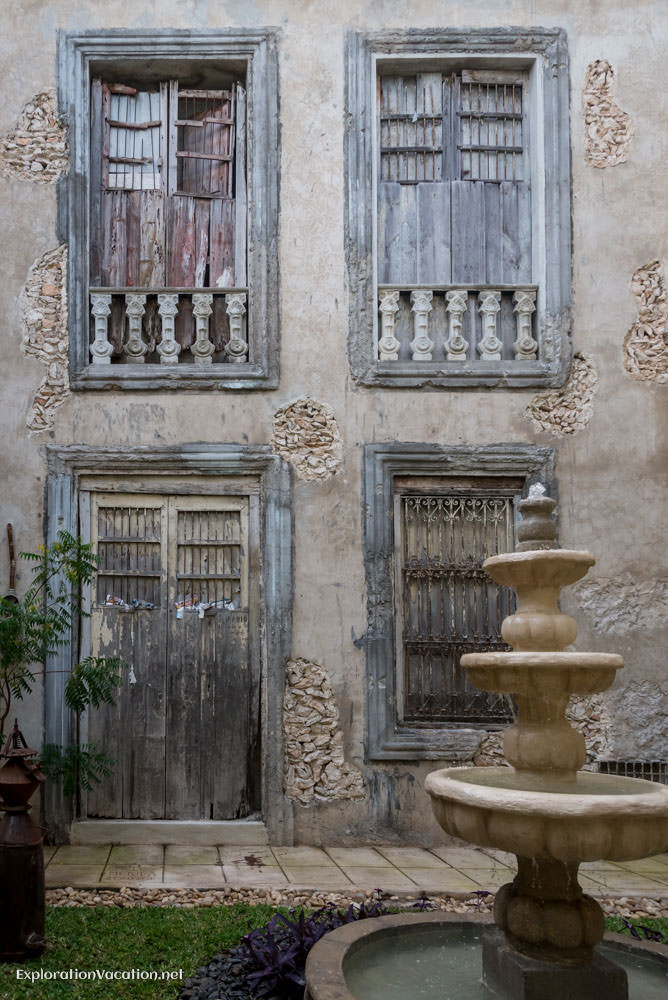 All of the building façades lining the courtyard are part of an illusion. They are faux façades. That derelict building? It’s just another faux painted wall. The illusion is supported by the fact that it is not unusual to have an abandoned property next door to a beautiful, fully-restored one. The inclusion of all sorts of details – like the fake rotting papers stuck in the window slats – helps too. 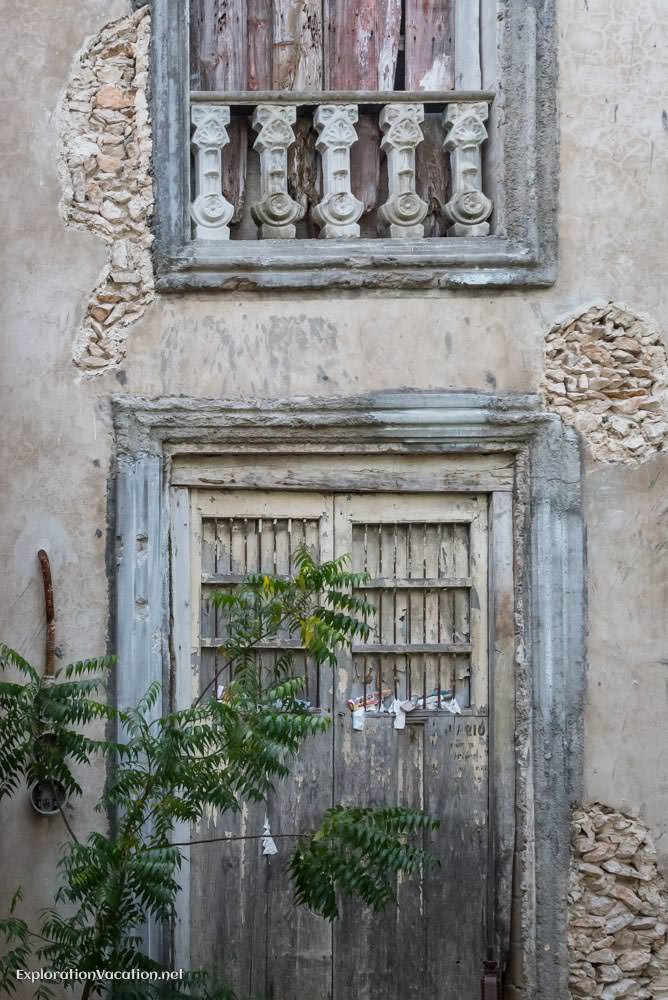 The creator of this house spent many years wandering the city’s streets and considering the city’s architecture before beginning work here. Unable to decide what style he wanted for the façade of his own house, he left the side facing the street plain and instead created seven different façades within his own courtyard. (This is reflected in the home’s name, which translates to “the hidden street.”) The façades represent a variety of architectural styles, including that derelict building and a colonial church. 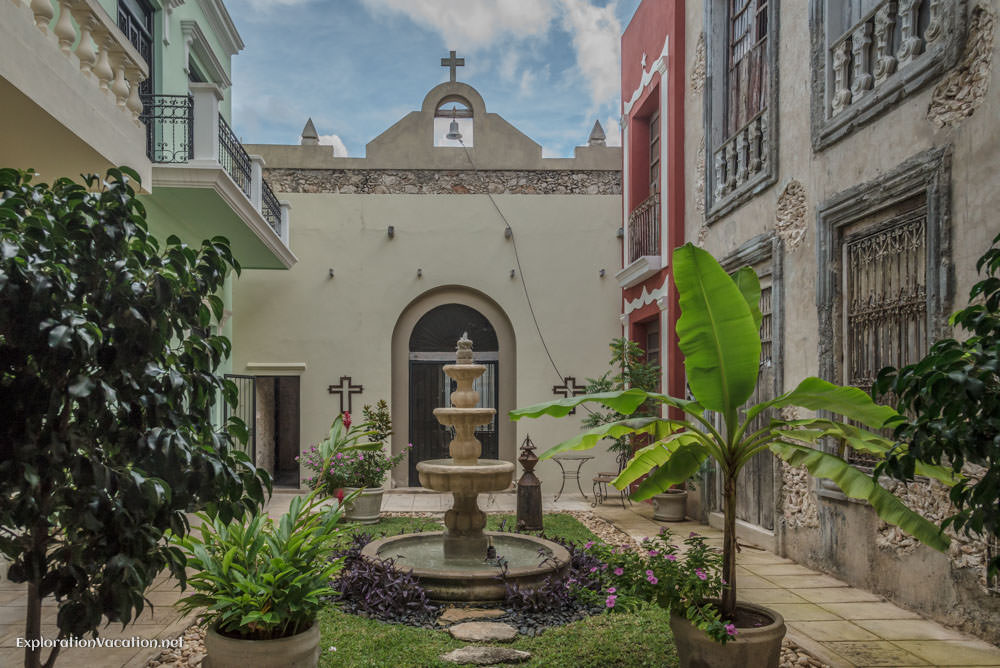 It seems impossible that the church façade didn’t become obvious until I crossed the courtyard and looked back at the entrance, but it didn’t. However, it creates a lovely scene from the garden and (rather over-the-top) dining room. 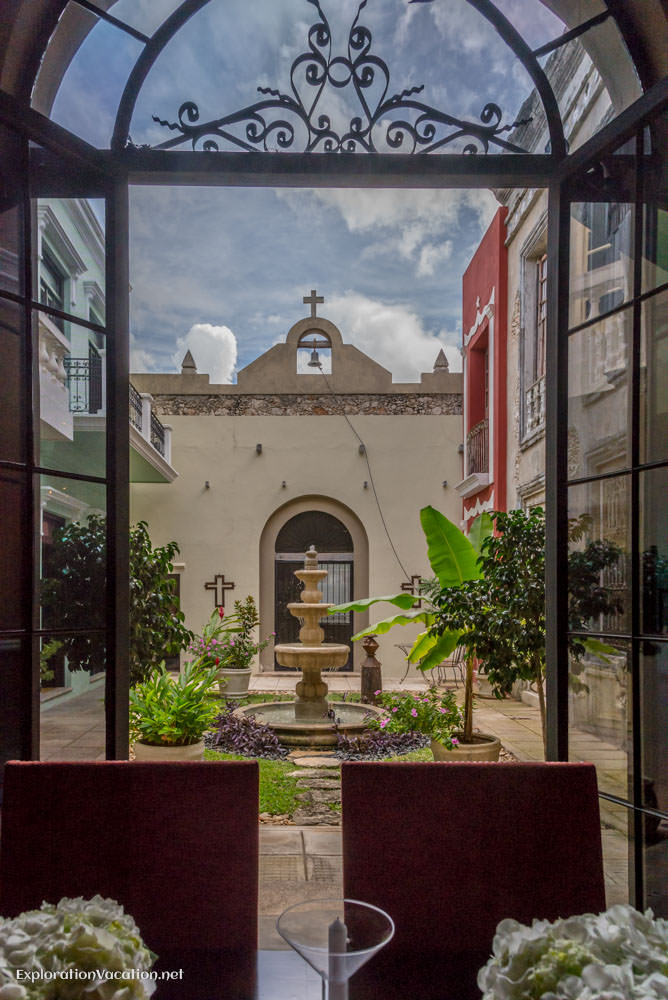 The dining room itself is in the main part of the house, as is the piano room, a living room or two, the kitchen, and bathroom. None of these spaces are ordinary.

Take the guest bath, for example, where towering walls open into a skylight that bathes the room with the ethereal light of a Rembrandt painting. 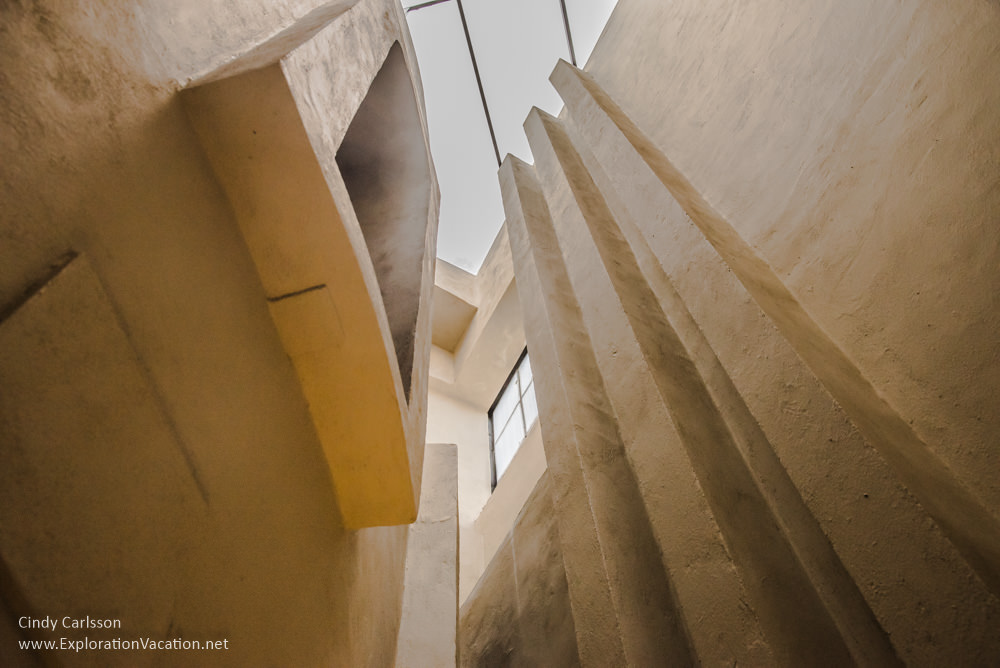 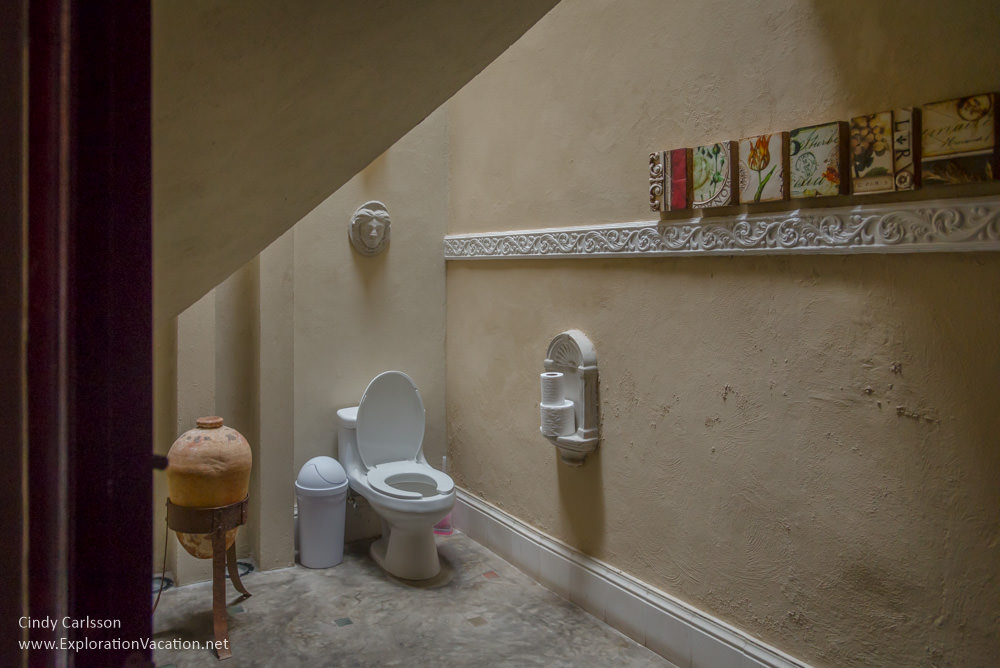 Or consider the kitchen that seems to float in space despite the massive concrete and tile table. 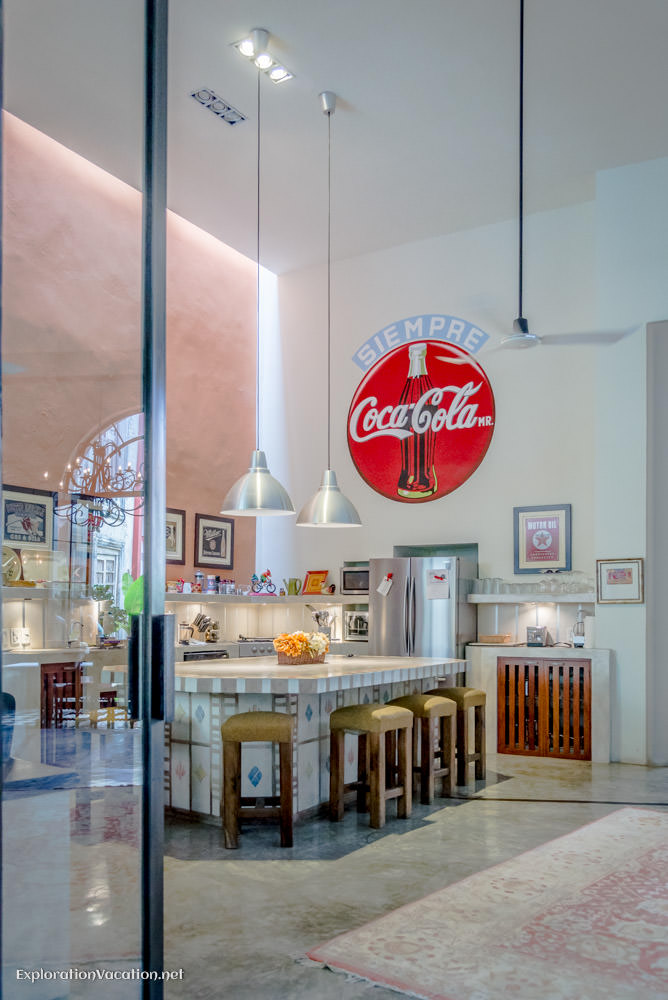 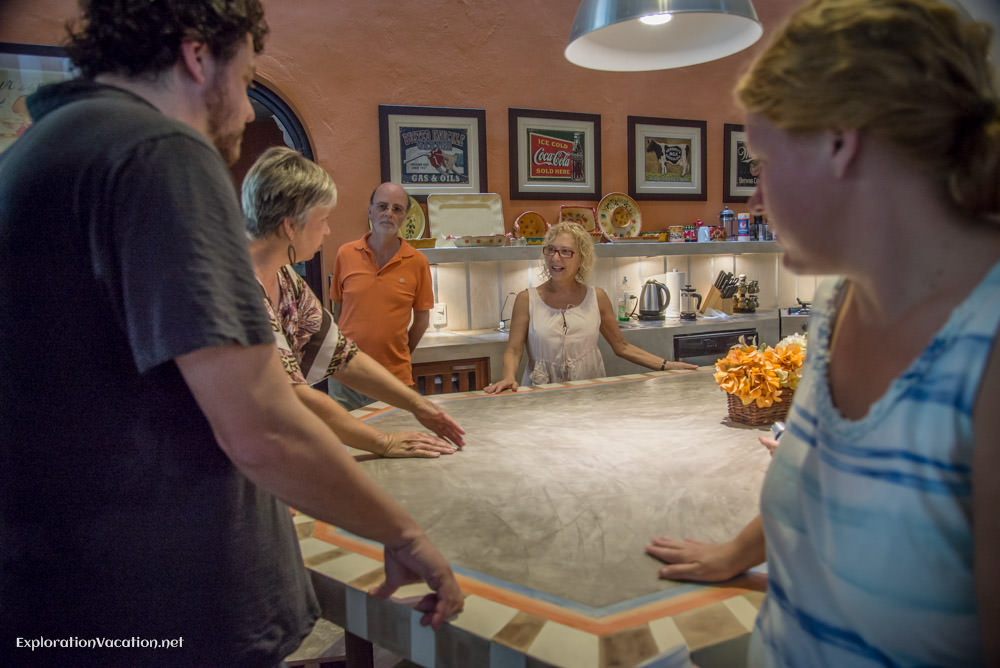 From the kitchen, you walk through another sitting area and out to another large courtyard.

This courtyard has an elegant portico, creating a serene cloister-like area (with plenty of potted plants and places to sit) that wraps around one side of the pool. 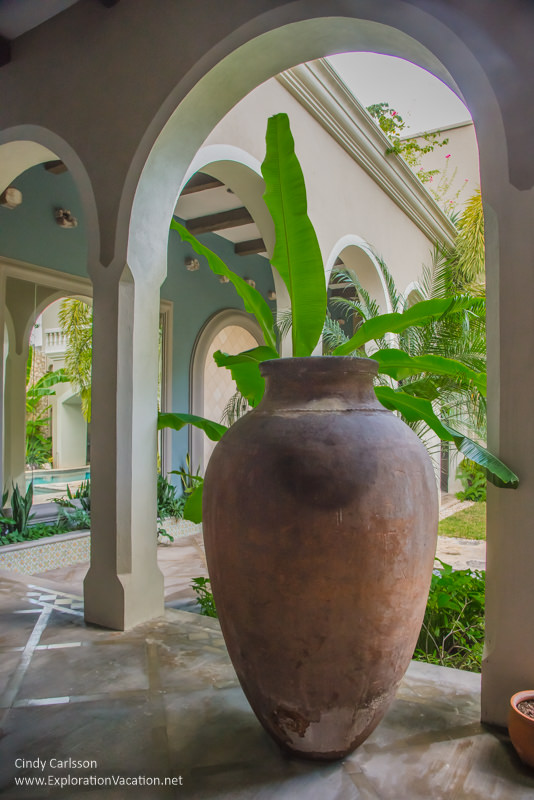 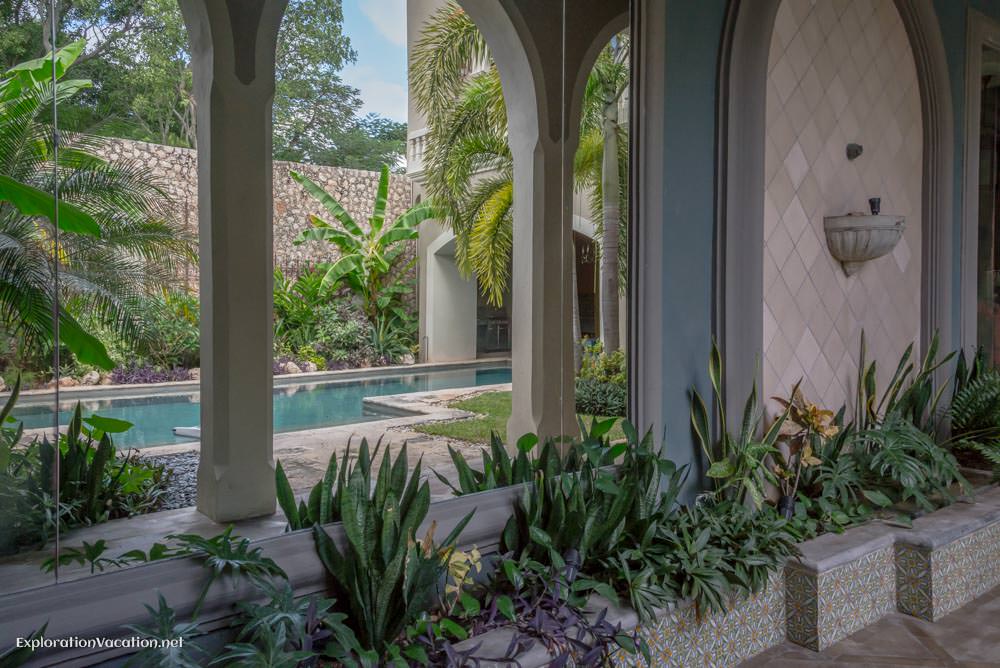 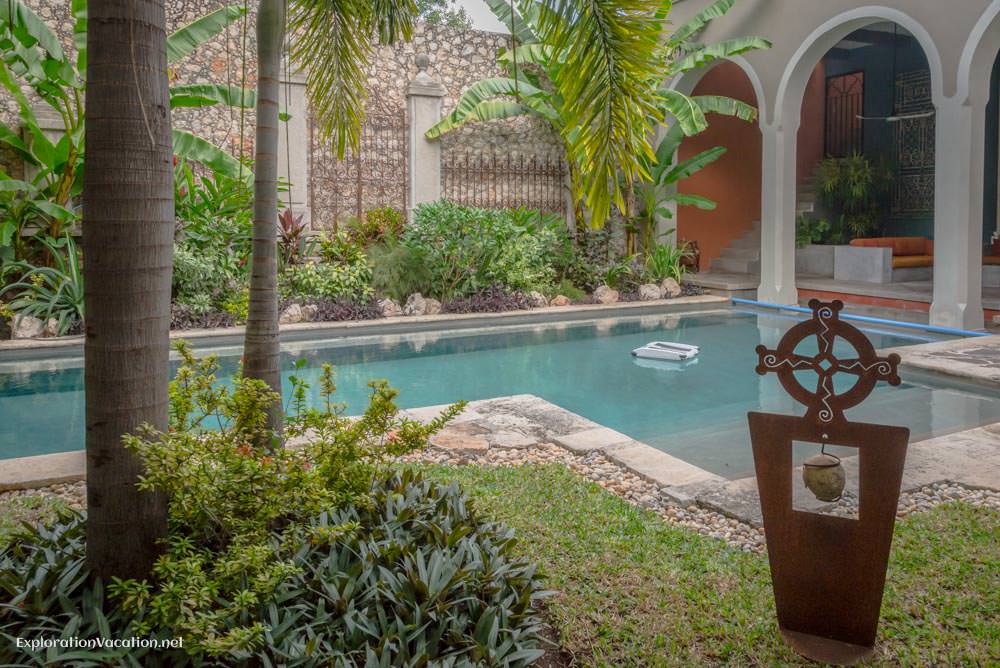 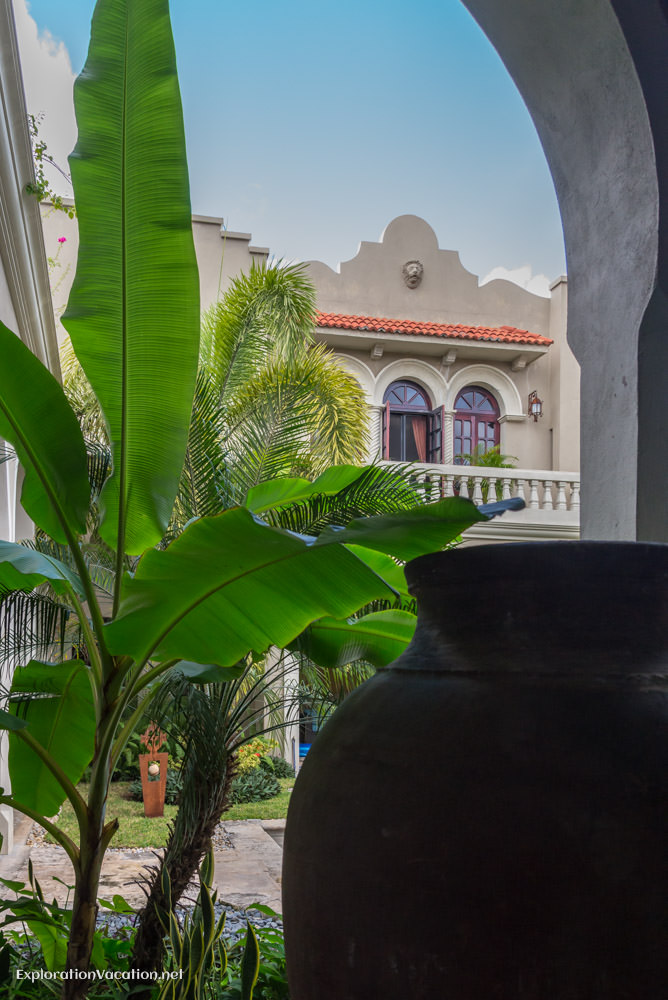 (The owner admitted that getting that huge urn here was a challenge, but she’s right: it is perfect for the space.)

At the end of the pool, a separate pavilion houses an outdoor living tucked below an upper-level master bedroom suite. 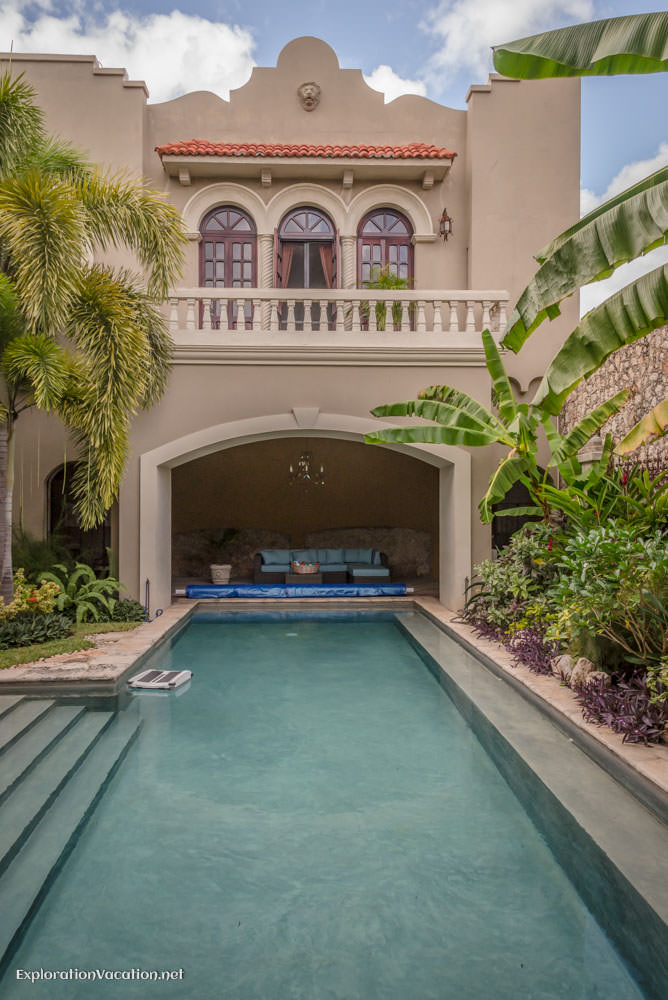 A simple exterior stairway leads to the upper level master bedroom suite. The open floor plan of the master bedroom includes both a simple-but-striking bathroom and a balcony with sweeping views across the courtyard and back to the main house. 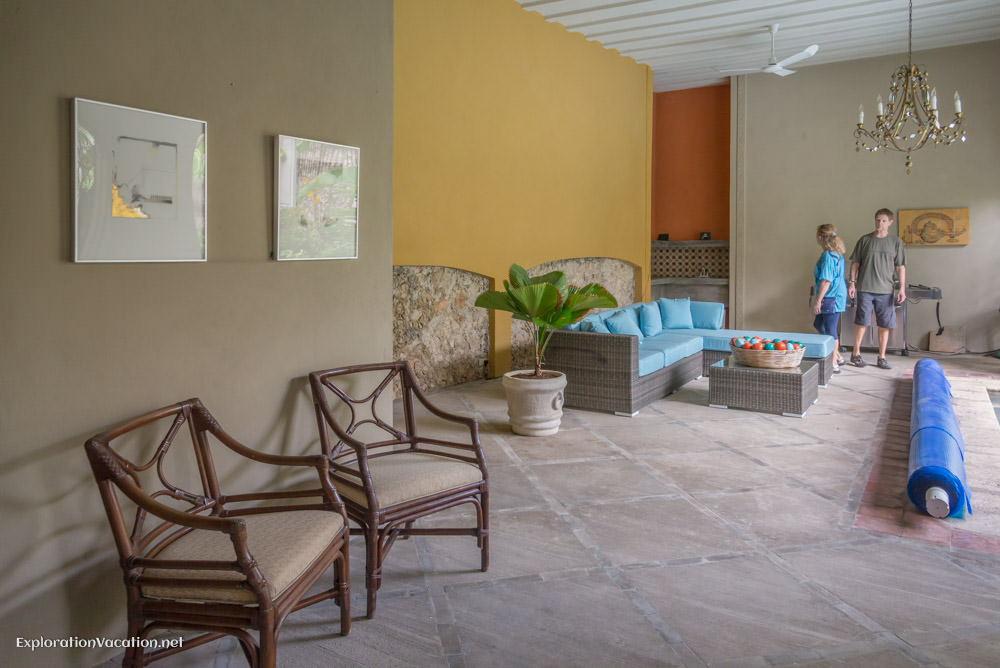 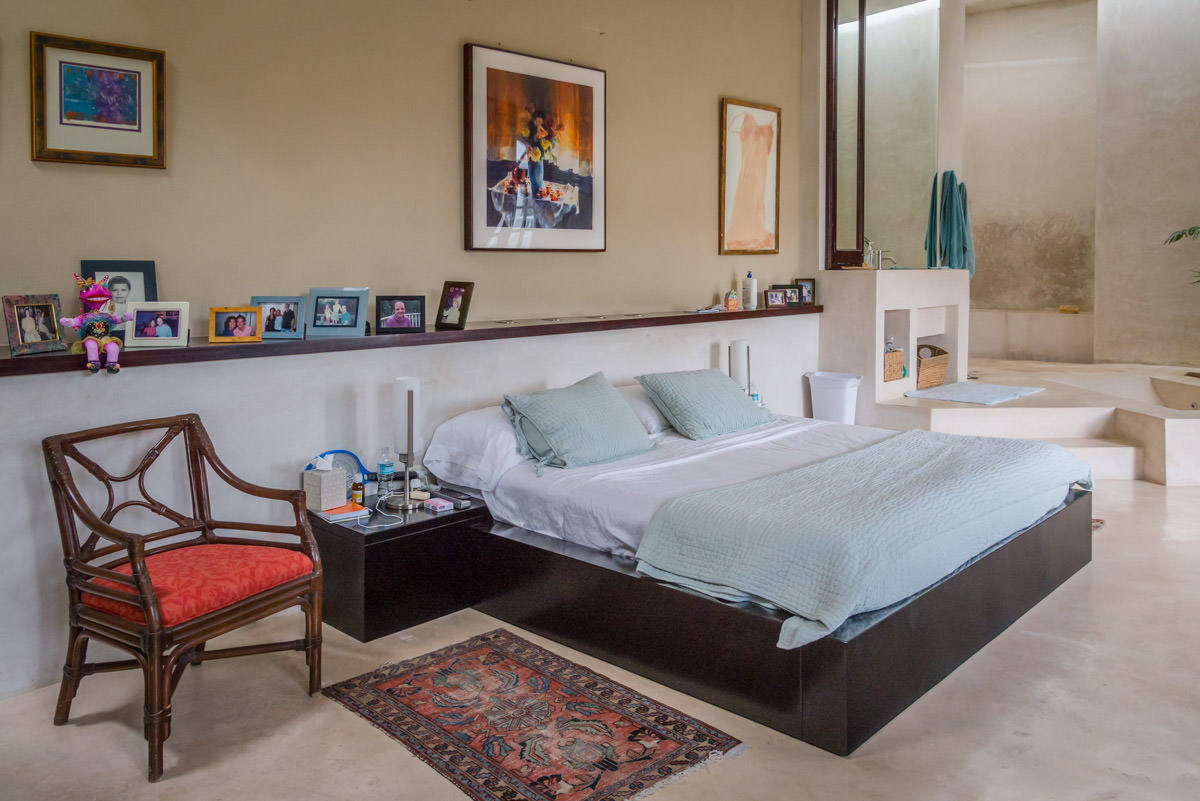 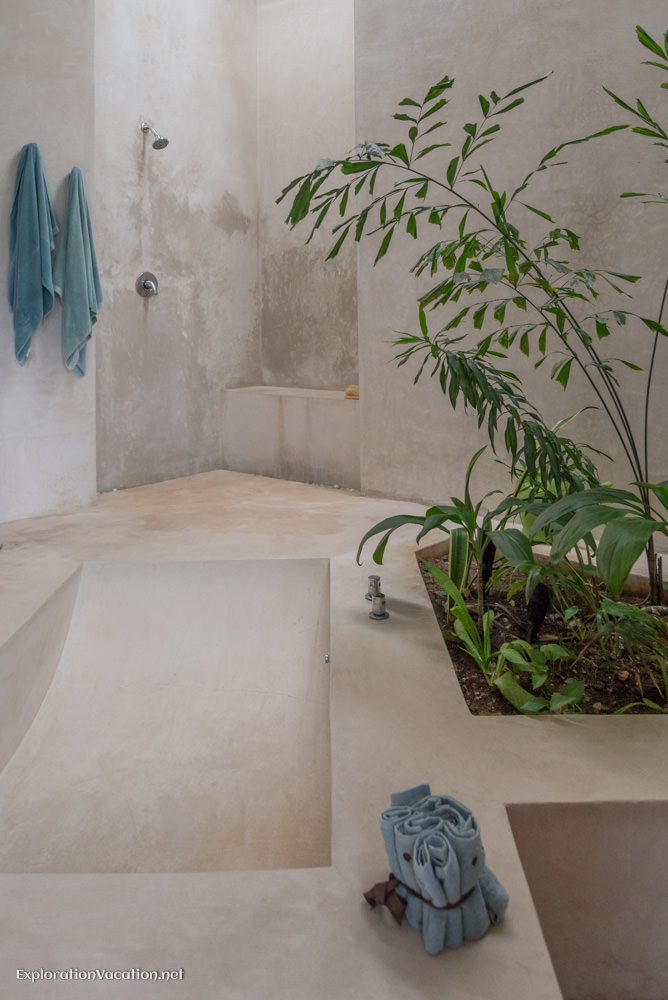 The size and complexity of the house is clear to see from this vantage point. And what a house it is!

We toured La Calle Escondida (The Hidden Street) last year on one of the House and Garden Tours offered by the Mèrida English Library. Tours are held on Tuesdays beginning in November and running through March. They begin at the library with a brief overview of historic architecture and construction techniques before the walking tour begins. Each tour visits at least three homes, with the homes on the tour continually changing. We were lucky to have this particular house included on the itinerary when we were in town.

La Calle Escondida has also been featured in a number of videos and television shows. A 2010 video by local guide Keith Heitke provides a good tour of the full house.