Clipper ships ruled the seas for a brief period during the 1840s and 50s. Designed for speed, these sleek wooden ships had three tall square-rigged masts that supported up to thirty-five sails. They were beautiful under sail and they were fast. As the express cargo transport of the day, they hauled high-value goods, including people, tea, spices, and mail.

While the clippers were the most famous of the tall ships, they were only one of the many types of sailing vessels found in New York’s harbor in the days before steam took over. Walking along the city’s harbor in the 19th century, a visitor would have seen many masts rising above the docks.

There aren’t many tall ships to be seen in the harbor today, but there are a few. And of those few, several regularly take passengers out on the water. One of these is Clipper City. 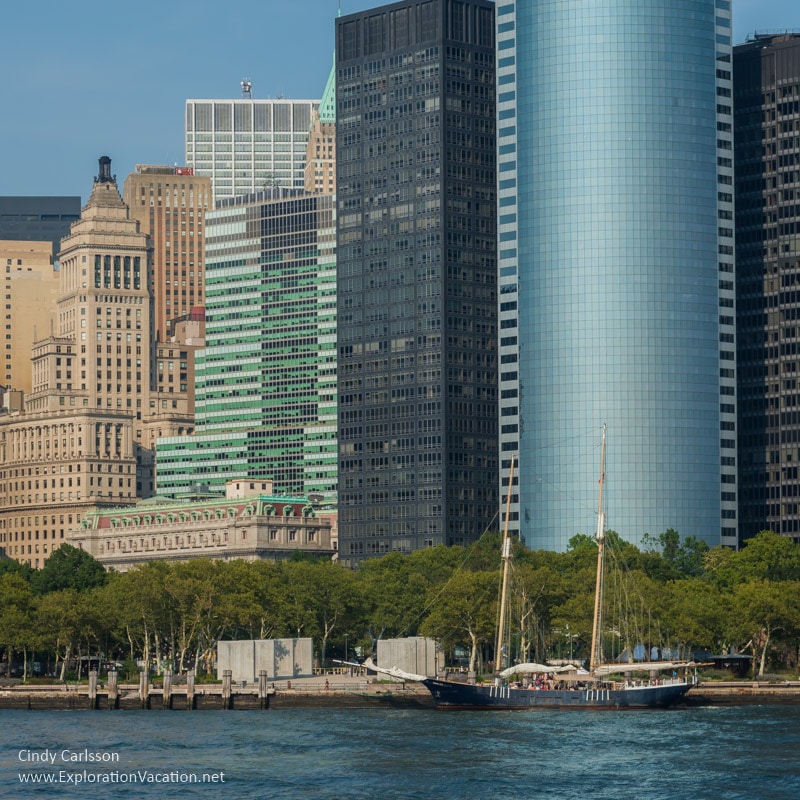 The original Clipper City (a two-masted schooner, not a true clipper) was built in Manitowoc, Wisconsin, in 1854. While that original ship has long since been lost to time, the plans used to build her survived. In 1984 she was rebuilt using those original plans, albeit with some modifications to meet current safety needs. That second Clipper City can now be seen in the waters along Battery Park and guests are welcome aboard for short trips past the gleaming towers of Manhattan and the Statue of Liberty.

We boarded late in the afternoon on a hot September day for a sightseeing cruise.

On board the boat there is a bit of time to wander around and stake out a good viewing spot (port or starboard seats?) before heading out into the bay.

While we wait I consider the intricate patterns the rigging cuts in the sky above. 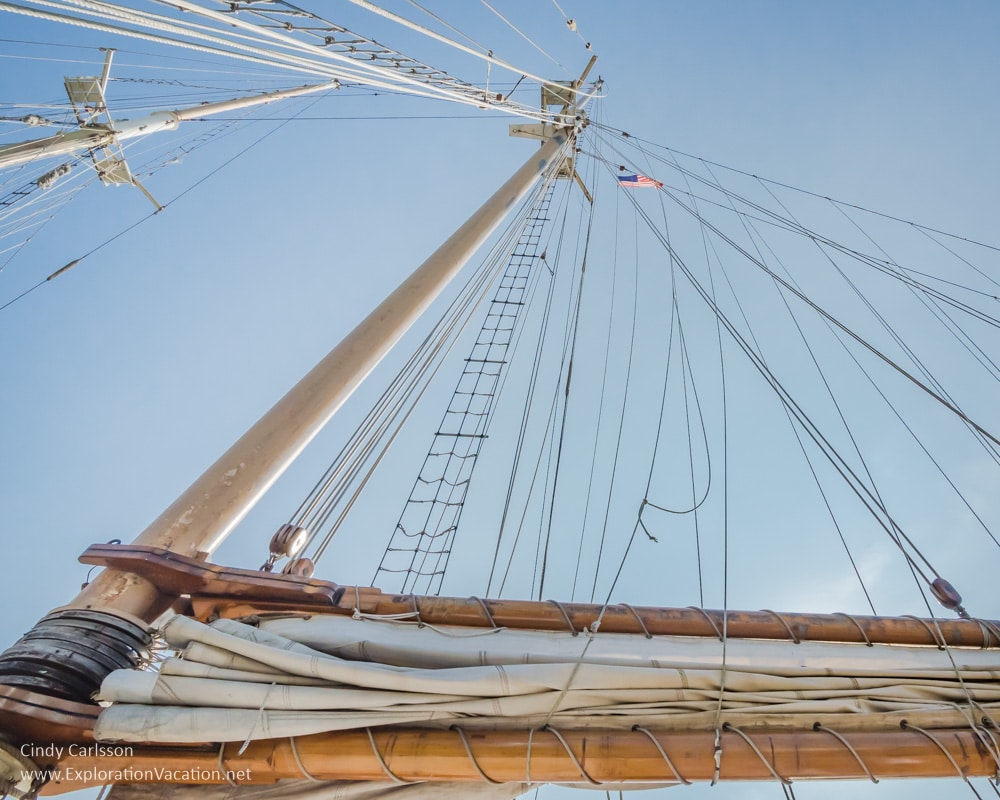 But soon sails are raised and it is time for the passengers to get a drink while the crew adjusts the sail trim! 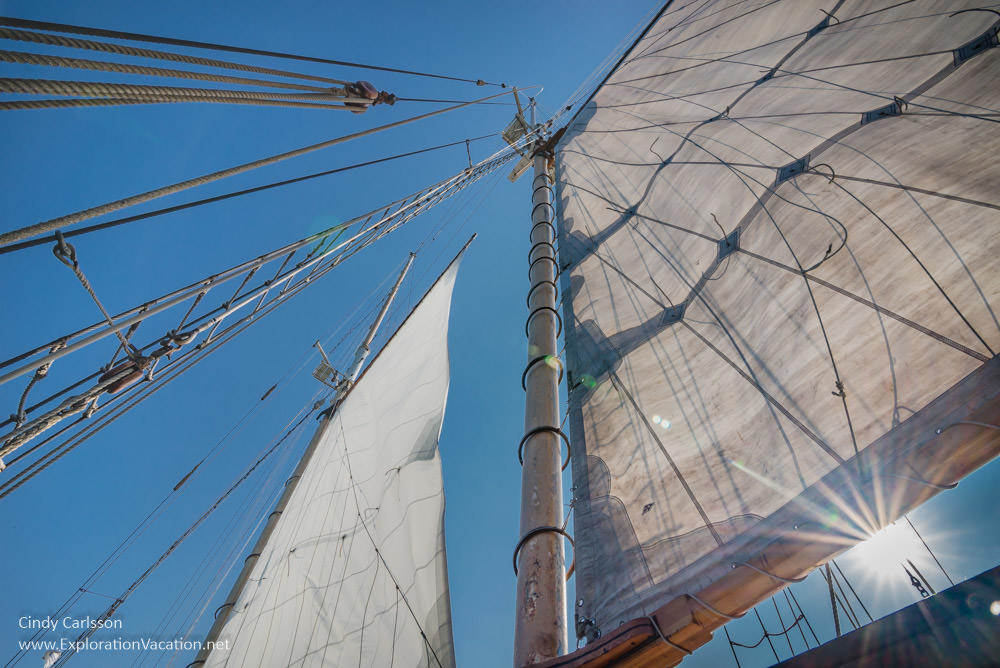 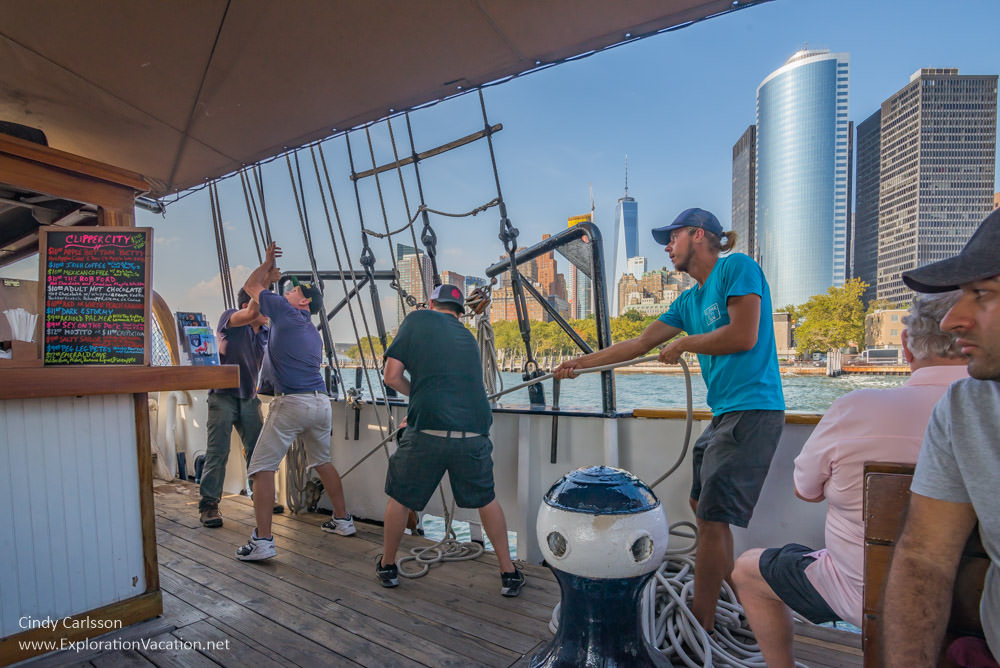 The sails are looking good. . . 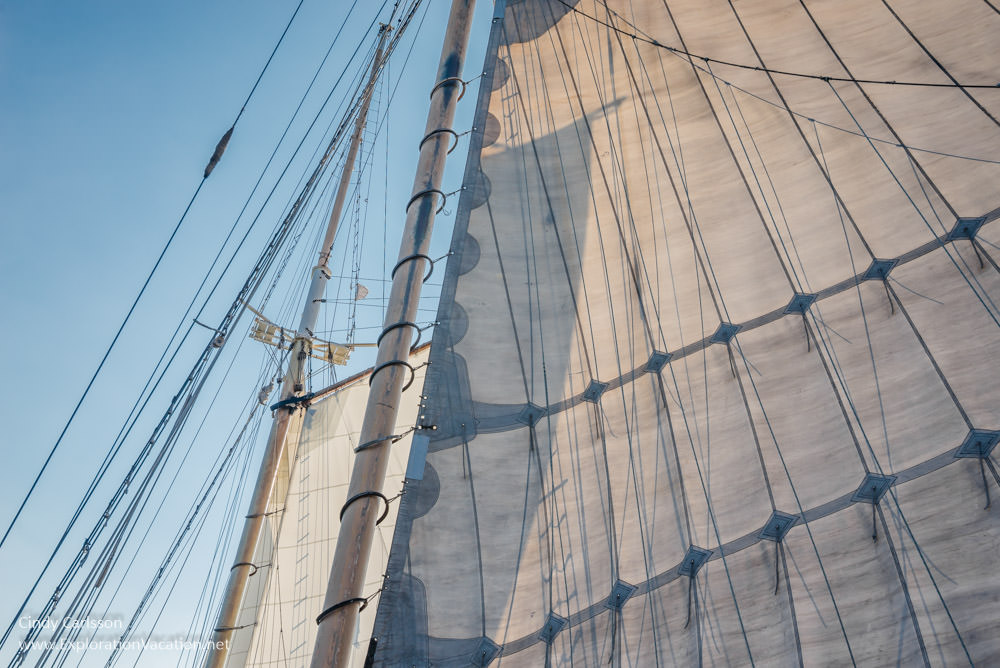 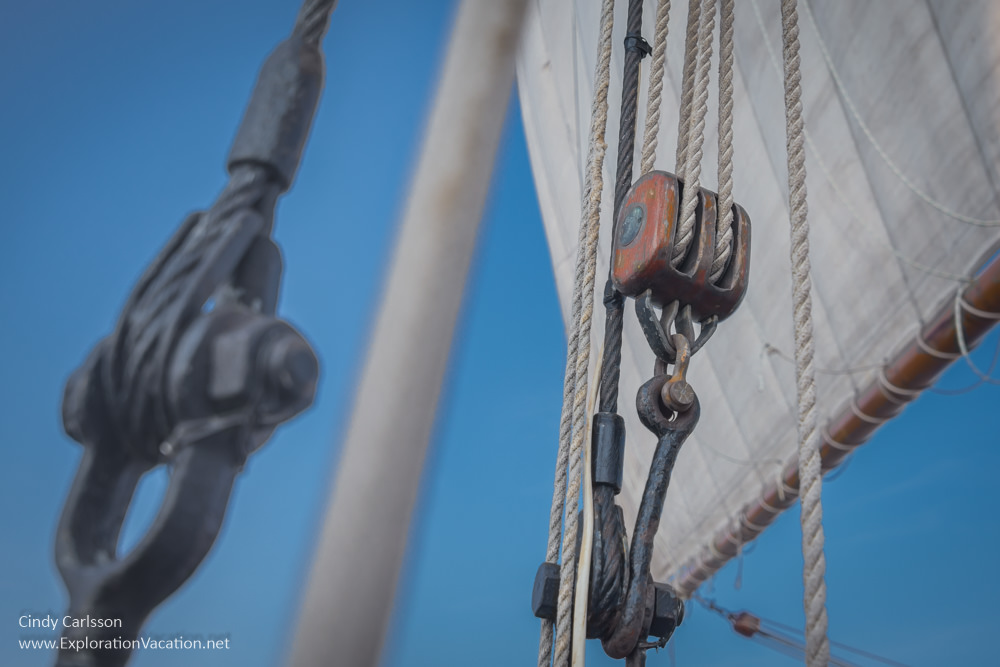 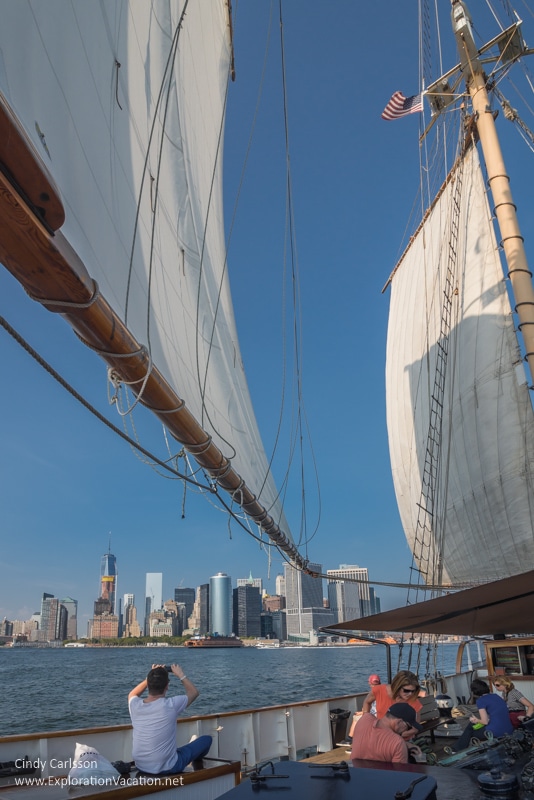 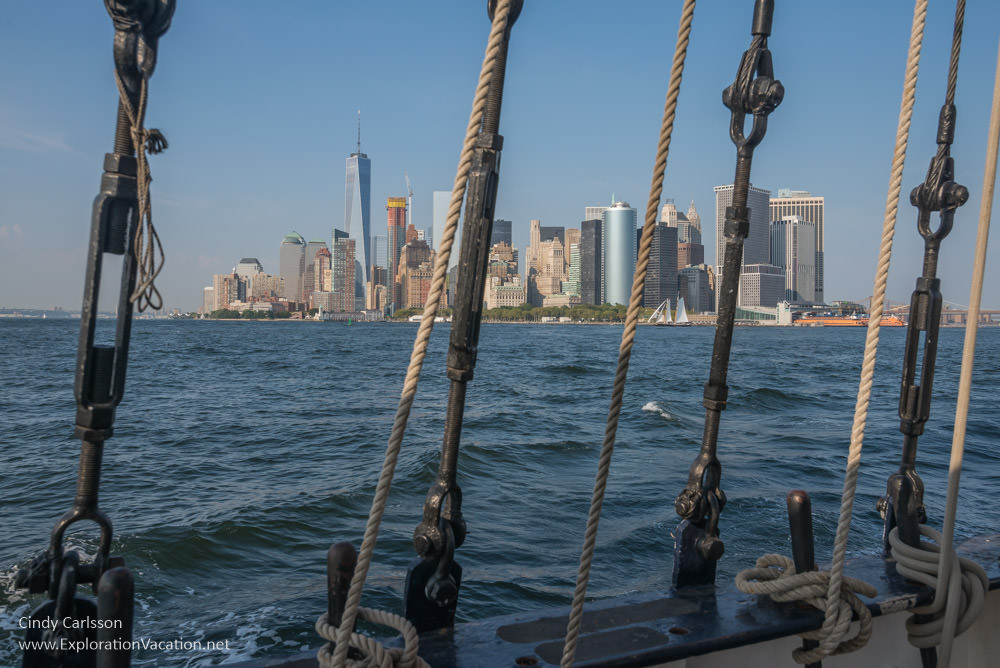 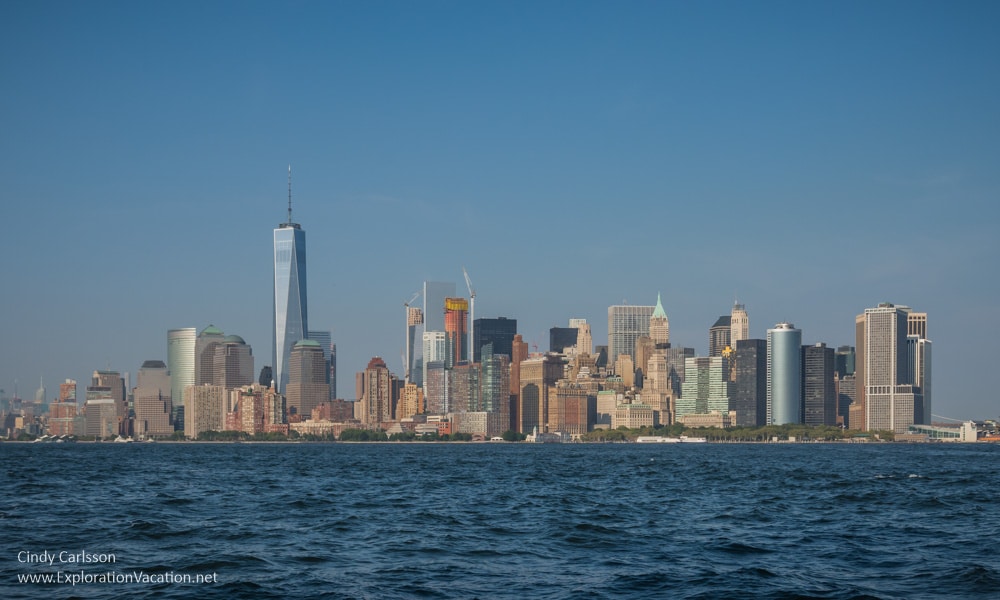 It’s a perfect day to be on the water, hot and sunny with just enough of a breeze to fill the sails. It’s lovely to silently glide across the bay for a closer look at the Statue of Liberty. 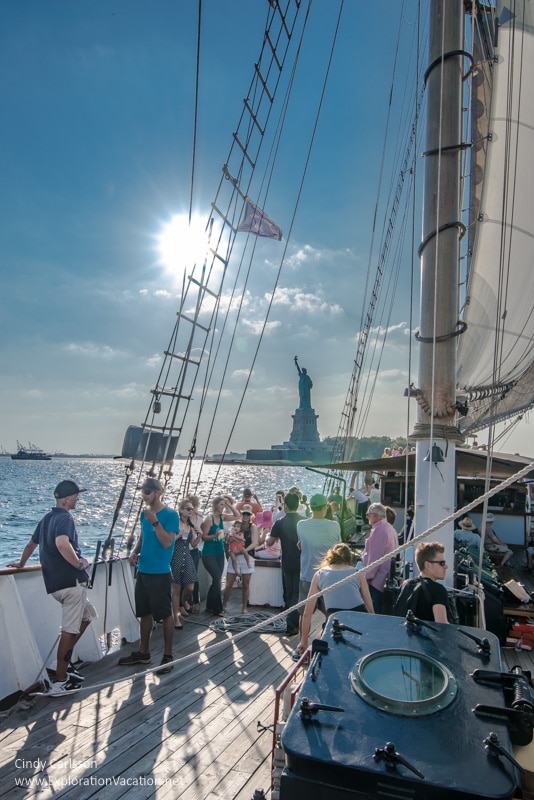 Even the captain and crew seem relaxed. 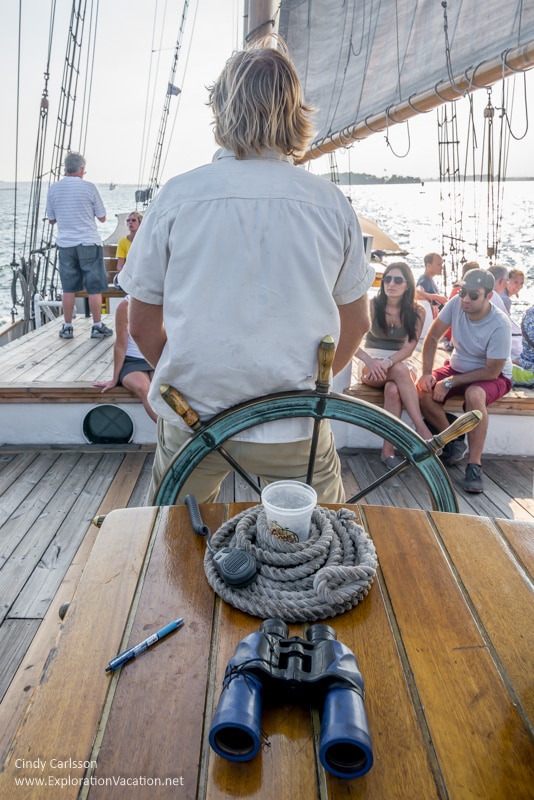 But Manhattan is never really out of sight and – too soon – we are headed back to the hustle and bustle of New York City. 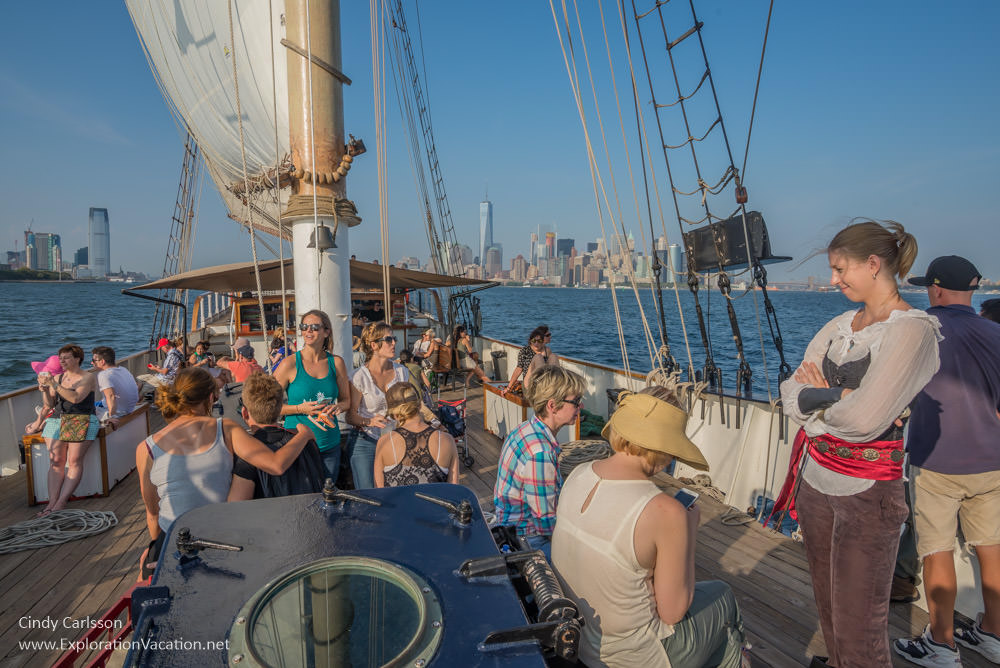 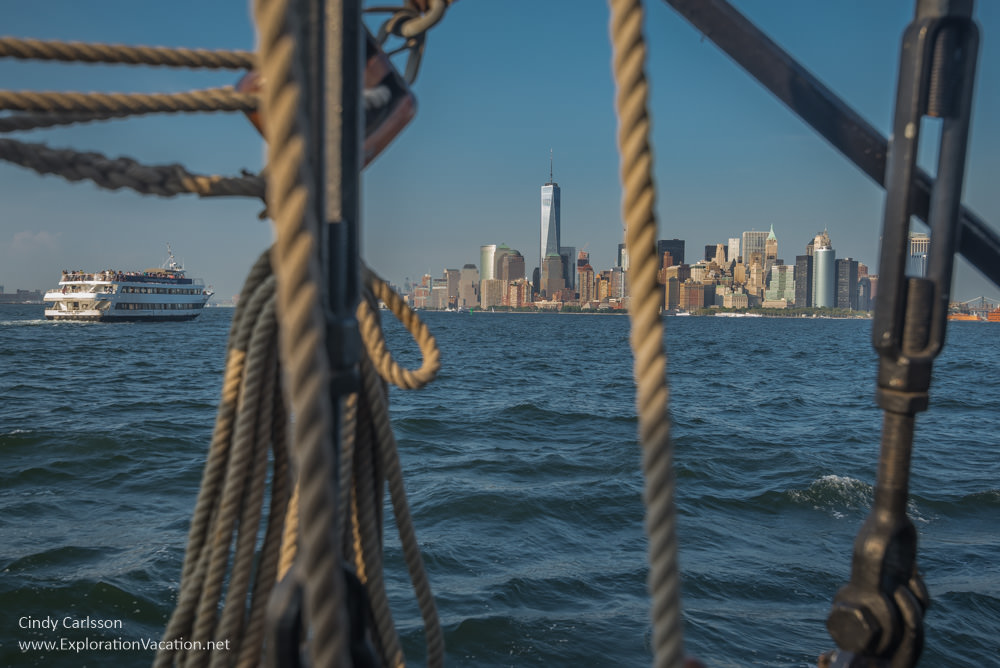 What a relaxing way to sail back in time for an afternoon!

Manhattan by Sail owns and operates Clipper City and a smaller schooner, Shearwater. During the sailing season (roughly April through October) a regular program of cruises is offered, including happy hour and evening trips. Clipper City is docked at the south end of Battery Park. Tickets are available at the dock or online – purchase tickets in advance for special occasions, as some sailings sell out. A variety of cruises on both ships were included in the New York pass, which is how we paid for our cruise.