Sculptor Patrick Dougherty created Monk’s Cradle (also known as Lean on Me) for Saint John’s University and Abbey in Collegeville, Minnesota, in 2012. It was removed in 2016.

Sculptor Patrick Dougherty has built a long career constructing whimsical forms he calls stickworks from saplings. A form of environmental art, the structures are created entirely from woven sapling trees. They resemble over-sized nests or woven buildings, and all are large enough for visitors to walk in or through.

Dougherty builds 10 pieces each year in parks and gardens around the United States and throughout the world. Over the years that adds up to about 300 of them, with more planned.

How long each remains depends on the location.

This is ephemeral art. Nothing is done to preserve the structures once they are built, so they start to deteriorate as soon as the are completed. In cold, dry climates a piece may last up to three years. However, a year or two is more common.

This means that, of the 300 he has constructed, fewer than 30 ever exist at the same time.

Dougherty’s website has a bit more information about the artist and his work.

In creating his stickworks, Dougherty has come to rely on the assistance of volunteers. This not only makes it possible for him to install a structure in just three weeks, but it also invests the broader community in the piece.

All wood for the structure is harvested locally by Dougherty and his team of volunteers. This is not a minor task, as these mammoth sculptures require truckloads of wood (tons of saplings) to construct.

Although the precise final form is shaped and adjusted during construction, Dougherty usually provides a drawing or small model so volunteers can actually see what he is working toward.

Volunteers help build the structure, beginning with the frame. Although the structures appear to simply sit on the landscape like a giant’s basket resting on the ground for a moment, they are actually firmly rooted in the earth. Tall saplings are buried in the ground as anchors.

These are then woven together form a sturdy frame. That supporting framework is hidden as the structure is filled out with architectural features like windows, doorways, and gables; whimsical twists and turns, and padding that softens the shape and makes the structure appear almost as if it were created by the wind itself.

Dougherty’s volunteers help with all of this, although Dougherty tends to do much of the exterior work himself because it is so critical to the final look of the piece.

For more on Dougherty’s philosophy and process, take a look at this video shot by Shwoodshop at a project for Oregon State University.

Dougherty created the structure he called Monk’s Cradle (Lean on Me) at Saint John’s University and Abbey in September 2012.

Inspired by the lakeside Stella Maris Chapel, he designed a cluster of five small stickwork chapels, complete with vaulted ceilings and rose windows, and a small central courtyard.

Although officially named Monk’s Cradle, the community knows it as Lean on Me. That comes from the way Dougherty designed the group of small structures to lean toward each other.

Like all of his projects, Dougherty used locally harvested saplings, both willow and ironwood. They were all cut from Saint John’s arboretum. Doing so both provided wood for the project and cleared unwanted brush from the landscape.

He was assisted by about 300 volunteers, including students from the College of Saint Benedict, Saint John’s University, and Saint John’s Preparatory School. They cut the saplings and helped build the structure over the course of three weeks

Monk’s Cradle (Lean on Me) was constructed entirely from woven sapling sticks. Fifteen tons of sticks. No nails were used. Even twine that held the structure’s off-kilter shape as construction began was removed once enough sticks were woven into it to hold it in place.

While clearly inspired by religious architecture, the structure’s woven saplings and windblown look give the sense of entering a church formed not only from natural elements, but by nature itself.

KSMQ Public Television has a very good video that discusses (and shows) the construction of Monk’s Cradle.

A temporary form of architecture

Monk’s Cradle (Lean on Me) was expected to stand for two years. But the university agreed to leave it standing as long as it remained stable. That allowed visitors over three years to explore the woven chapels and contemplate the impermanence of all things.

After becoming unstable, it was burned in January 2016.

The slight rise where it was once just visible from the highway seems especially empty now.

Despite regular travel to central Minnesota and seeing photos of Lean on Me taken by all my friends, I was slow to get there myself. Almost too slow, as the structure was originally slated for demolition a few months before my visit.

Not that I hadn’t seen it before. For a moment, from a distance.

Lean on Me (as it is known locally) sits on a slight rise in a bit of prairie not far off I-94. If you look at just the right moment, you glimpse a cluster of odd-looking structures off in the distance.

Structures might be too strong a word as, from that distance, it’s hard to guess what these misshapen forms are – dead trees, old hay bales, crumbling buildings? They catch the eye because they seem to both blend into and stand out from the rolling fields and prairies around them. They appear both organic and man-made.

If you exit the freeway on County Road 159 and follow the road south just a bit, you’ll soon come upon them. Although it still may not be clear what, exactly, it is you are looking at.

But it will soon become clear that they only look is if constructed by the wind blowing across the prairie. Human hands built these, weaving the natural materials together to create a cluster of individual structures (nests?) that huddle together against the prairie wind.

Let your imagination run free as you wander through each structure and you will discover soaring domes, rose windows, arches . . . the architectural elements of a Christian chapel rendered in twigs and branches.

If you are quiet when you enter, you might discover another world.

While this work is usually referred to as Lean on Me, Dougherty calls it Monk’s Cradle. Both names are apt.

Despite their openness, the sticks mute the light entering the chapels. Perhaps they mute our sense too, as the outside world easily falls away. It is as if you have entered a protected place that straddles the worlds of nature, God, and humans. A place out of time, an ancient world where shadowy figures in simple cloaks contemplate the word of God and what it means to live in community, to live in a place where spirit and community are quietly grow.

Patrick Dougherty’s website has biographical information, featured work, and more – including a list of upcoming projects and links to stories and videos about recent projects.

A 2012 interview on the OEN website delves into Dougherty’s background, process, and philosophy.

Where to see Dougherty’s work

Patrick Dougherty usually creates 10 pieces each year, and each usually lasts for a year or two.

In the first few months of 2020 he created pieces in Alabama, North Carolina, and Florida.

2019 projects include projects at the US Botanic Garden in Washington DC, the Denver Botanic Garden, the Morris Arboretum at the University of Pennsylvania, and the Minnesota Landscape Arboretum. All of these pieces should still be on display

The Landscape Arboretum’s structure, called You Betcha, was constructed in May 2019. 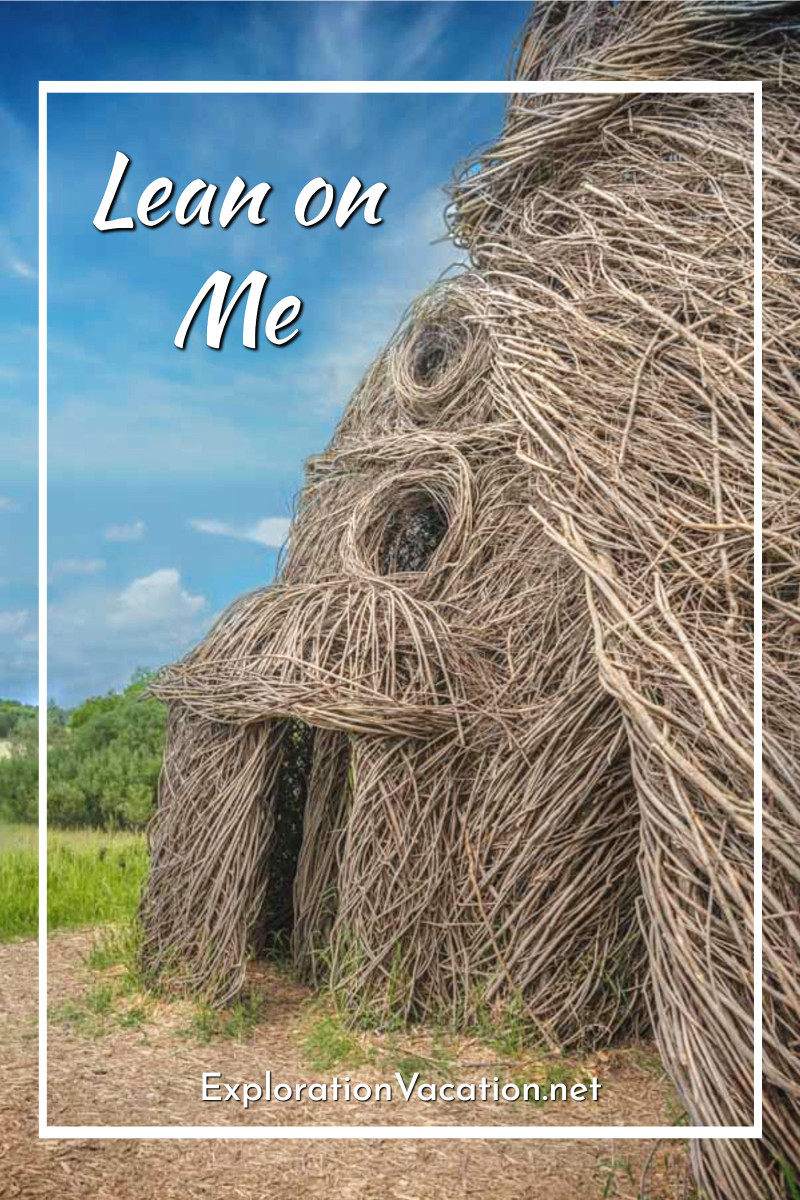 If you like the photos you see here, check CindyCarlsson.com for high quality art images.

4 thoughts on “Patrick Dougherty: Monk’s Cradle (Lean on Me) in Minnesota”