The west is riddled with ghost towns, the abandoned remains of big dreams and economic booms gone bust. While a quick tour of Pinos Altos (Tall Pines) may leave you thinking you’ve stumbled across a particularly well-preserved example of these towns, any ghosts remaining here have plenty of company.

Established in 1860 when gold was discovered in the creek here, the town was a bustling mining settlement until the collapse of the copper market in 1907. Abandoned for a time, today the town’s historic buildings house a restaurant/bar, museum, gift shop, vacation cabins, church, fort, and private homes. While there are also modern homes here (all built in fairly traditional styles), this little tour focuses on the town’s more historic elements.

Let’s head into downtown and see what we find. 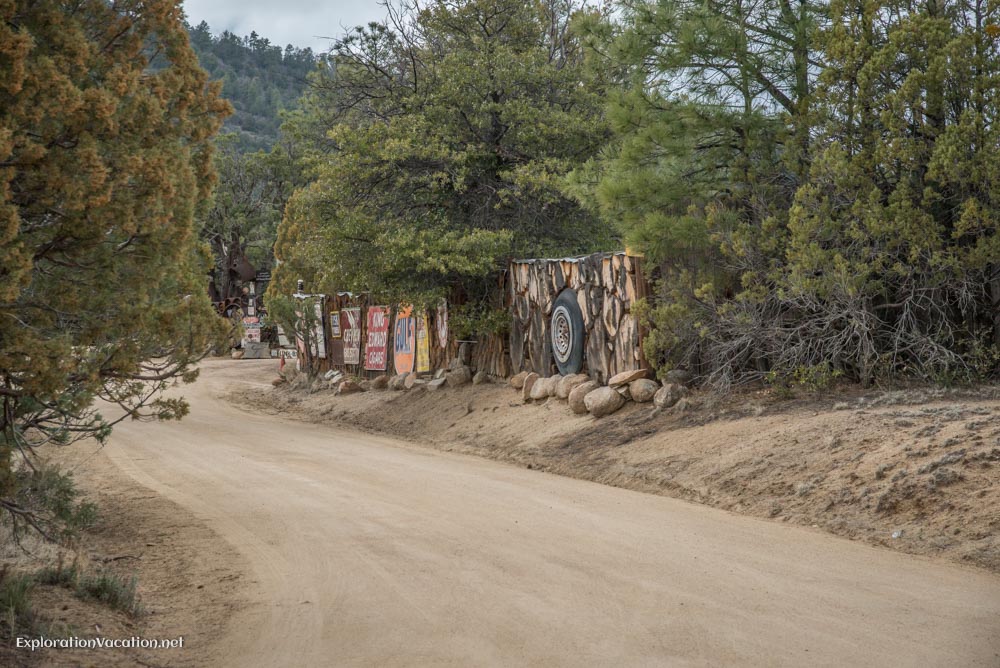 The heart of the downtown business district today is the Buckhorn Saloon. 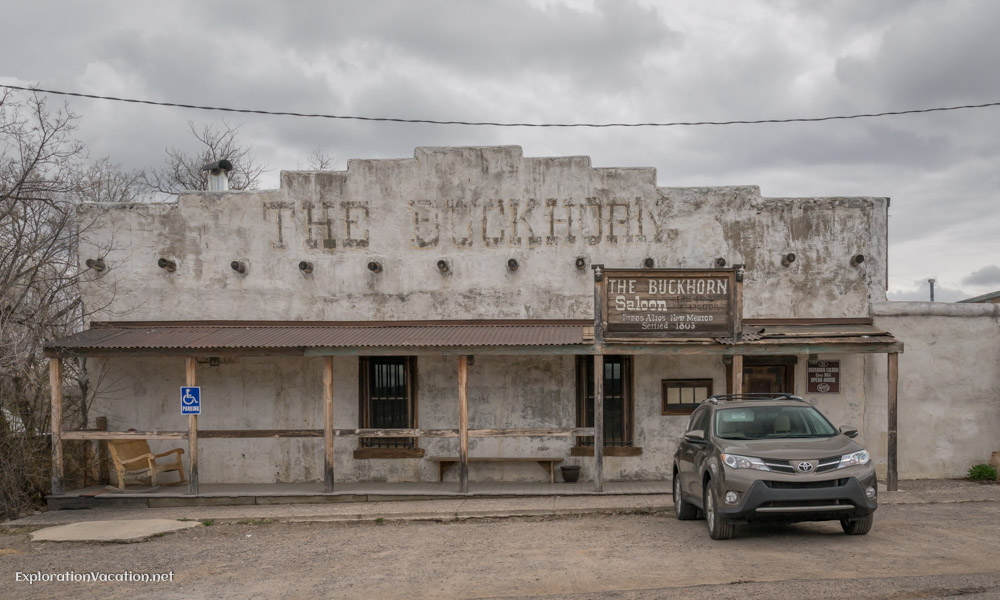 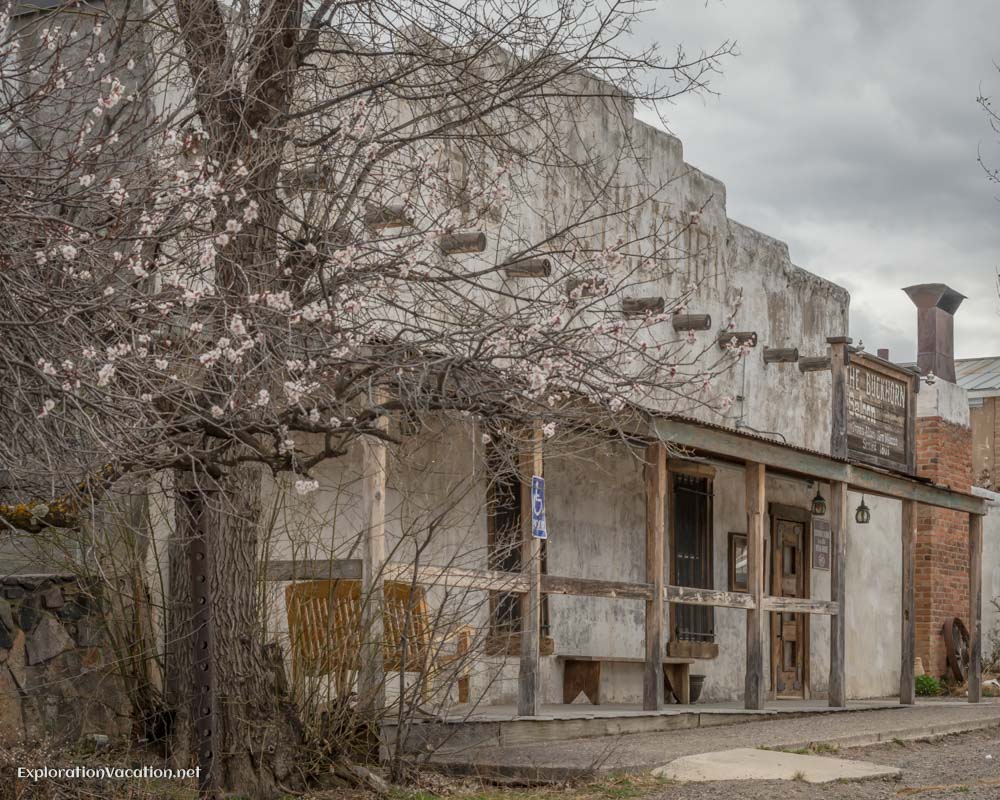 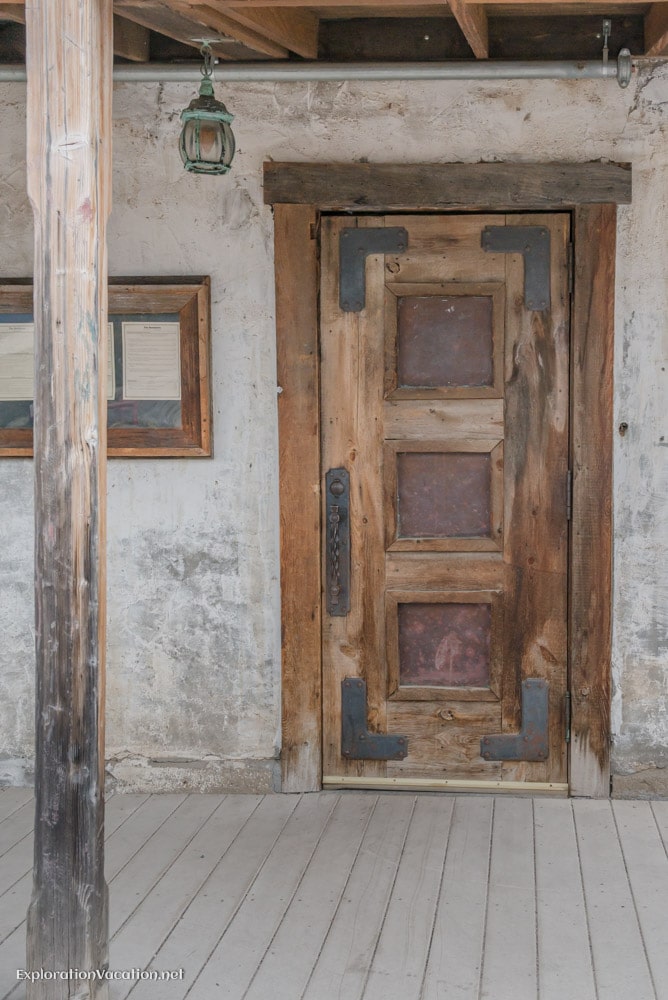 Although modified and expanded over the years to provide space for a modern sit-down restaurant, the Buckhorn is believed to be the original saloon owned by city founder James Bullard during Pinos Altos’ first decades. (A fire 30 years after the town’s founding destroyed most downtown businesses, but appears to have spared the saloon.) It is a place where you wish the walls could talk – especially because there doesn’t seem to be much information on the saloon between its founding and its purchase by the family that has owned it since the 1950s.

The adjoining Opera House, on the other hand, is a fake, built in 1969 to look like as if it were built a hundred years earlier. It provides space for cultural events and private parties. 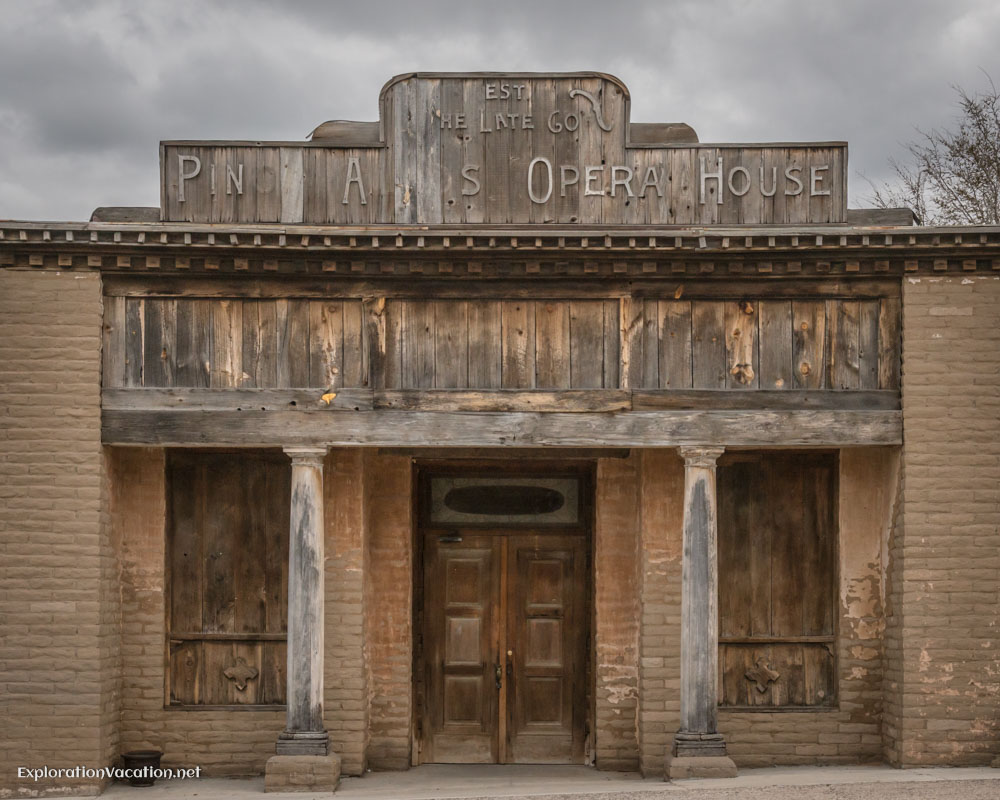 The Norton Store (circa 1860s) served as one of the town’s general merchandise stores, but that is about all I have been able to find out about it. (It is NOT the mercantile where lawman Roy Bean once worked. That building no longer exists.) Apparently the building houses an ice cream parlor/gift shop/post office, but it looked quite abandoned on our early spring visit. Perhaps it comes to life in the summer. 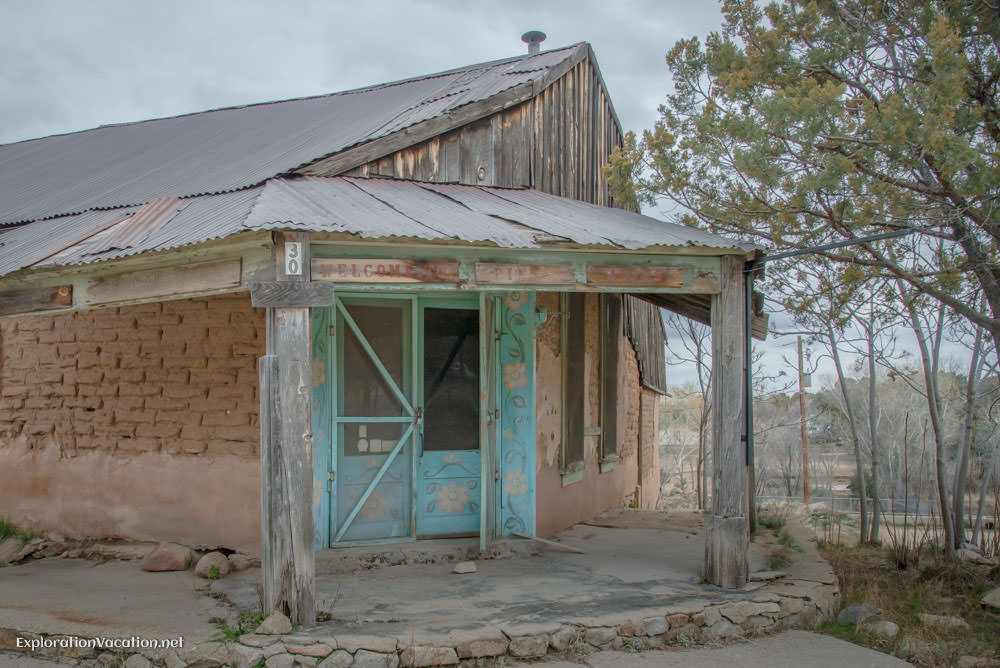 It’s a charming spot for a business, even if the building itself needs a bit of attention. 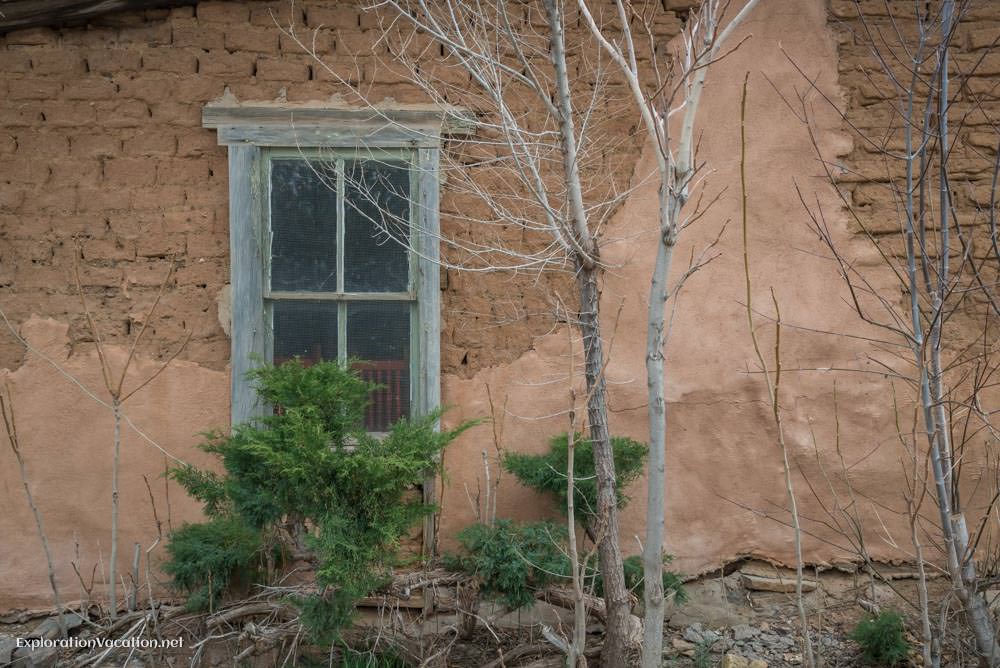 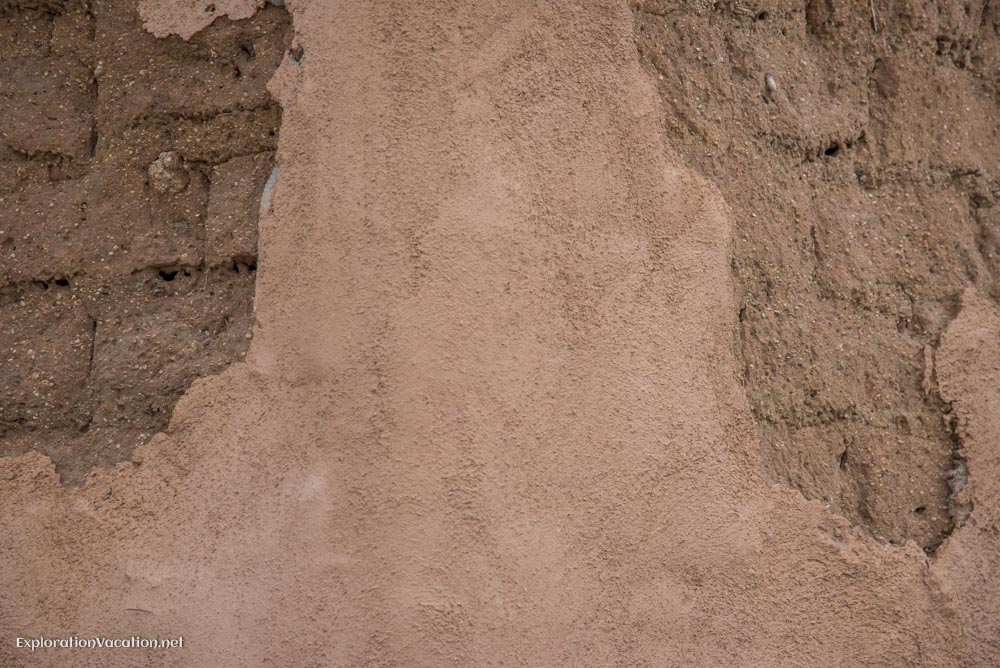 A large parcel at the edge of downtown is home to a ¾ scale replica of the Santa Rita del Cobre Fort. (The land where original fort stood is now a mine pit.) Built by the Spanish in 1804 to protect early miners from Apache attacks, the American army renamed it Fort Webster in 1852, immediately moved the fort to a more suitable location, and then quickly abandoned it completely in 1853. 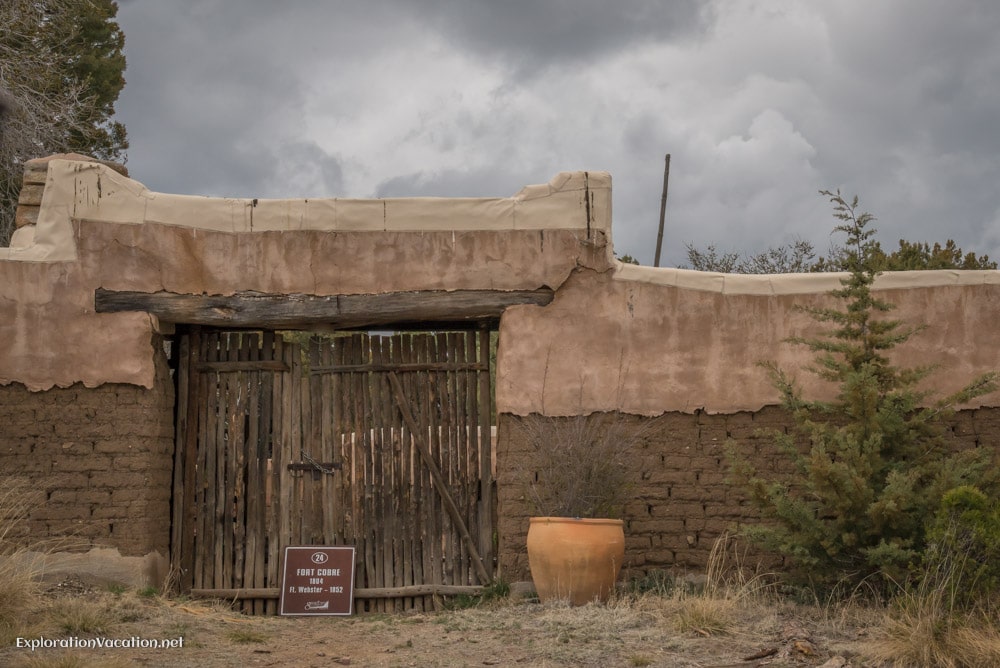 Apparently the replica fort includes a number of artifacts, but it wasn’t open when we visited. A peek through the barricaded entrance provided a glimpse of benches, old machinery, and a few other artifacts . . . all guarded by a flock of chickens. It may be open to the public in the summer. 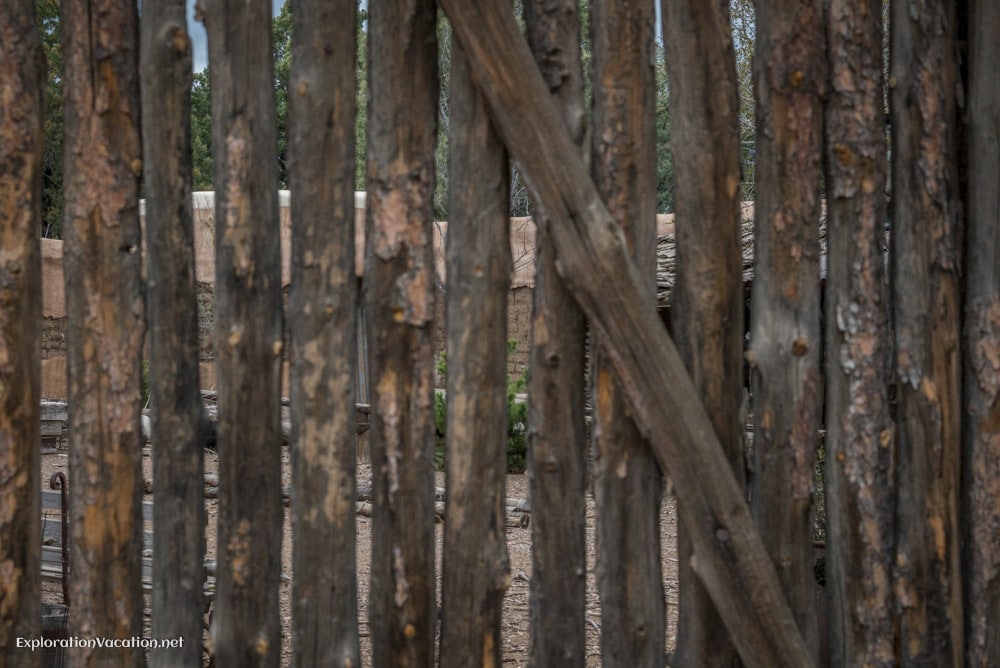 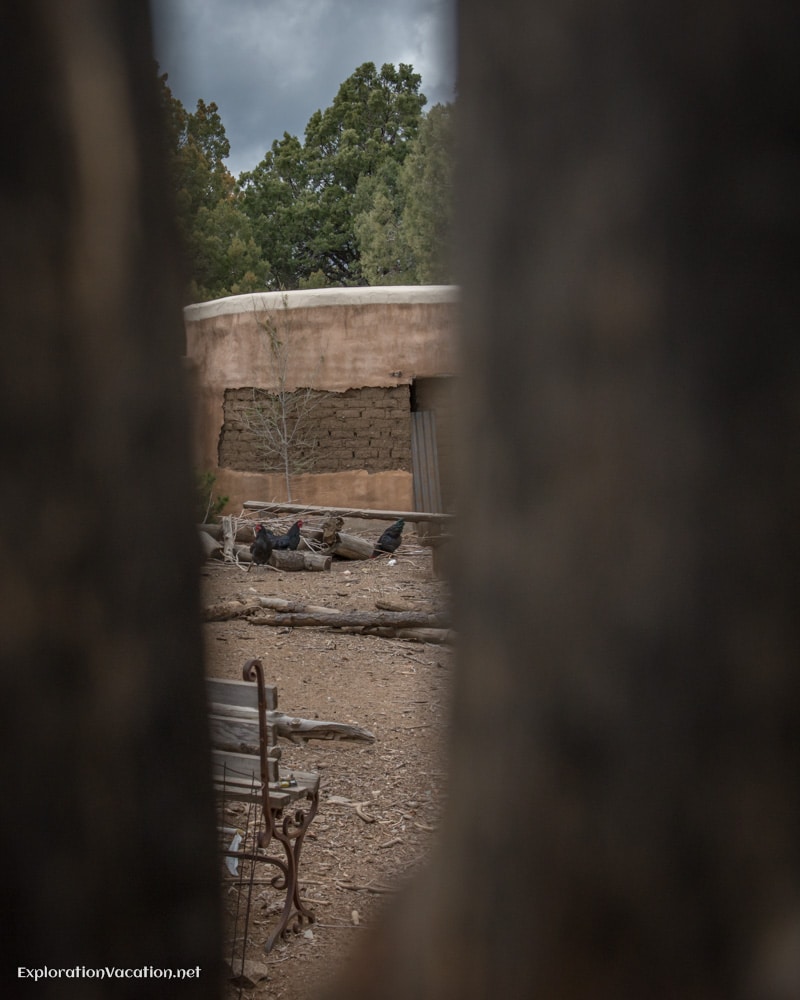 The 1889 Gold Avenue “Hearst” Church sits just up the hill from downtown. Built with significant funding from the widowed mother of William Randolph Hearst (of newspaper fame), the church served both Methodist and Episcopalian parishioners. While it seemed abandoned when we visited, the building is home to the Grant County Art Guild and is used for art exhibitions. Apparently it is open on weekends in the summer. 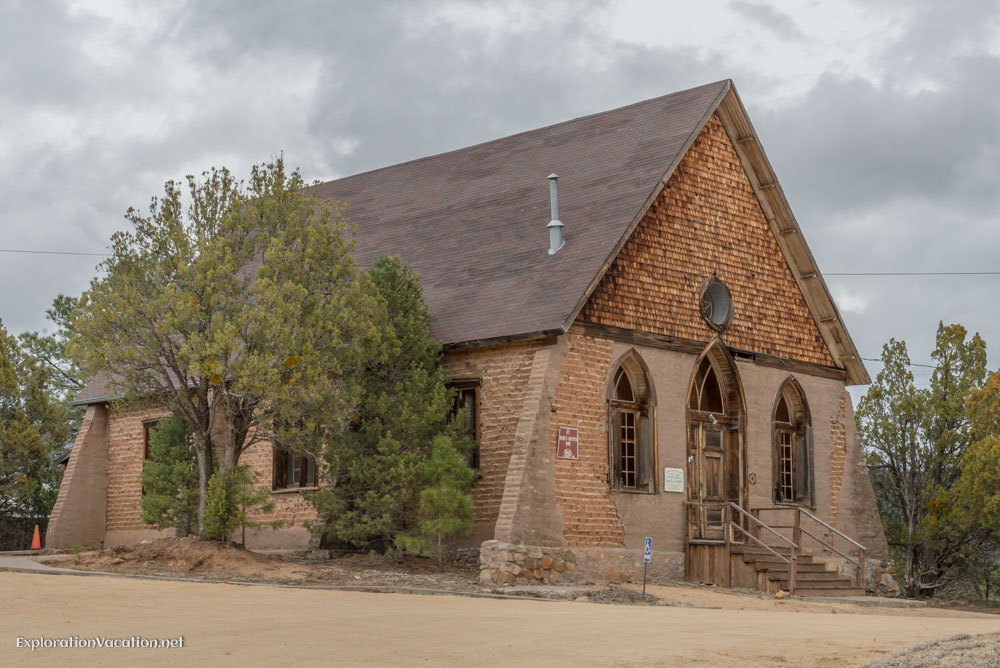 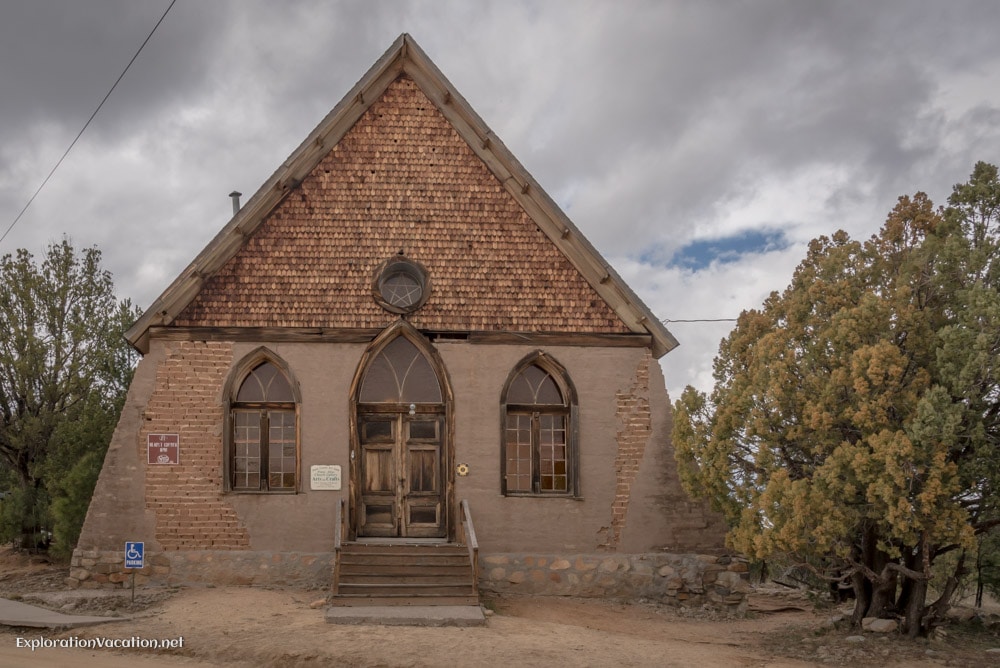 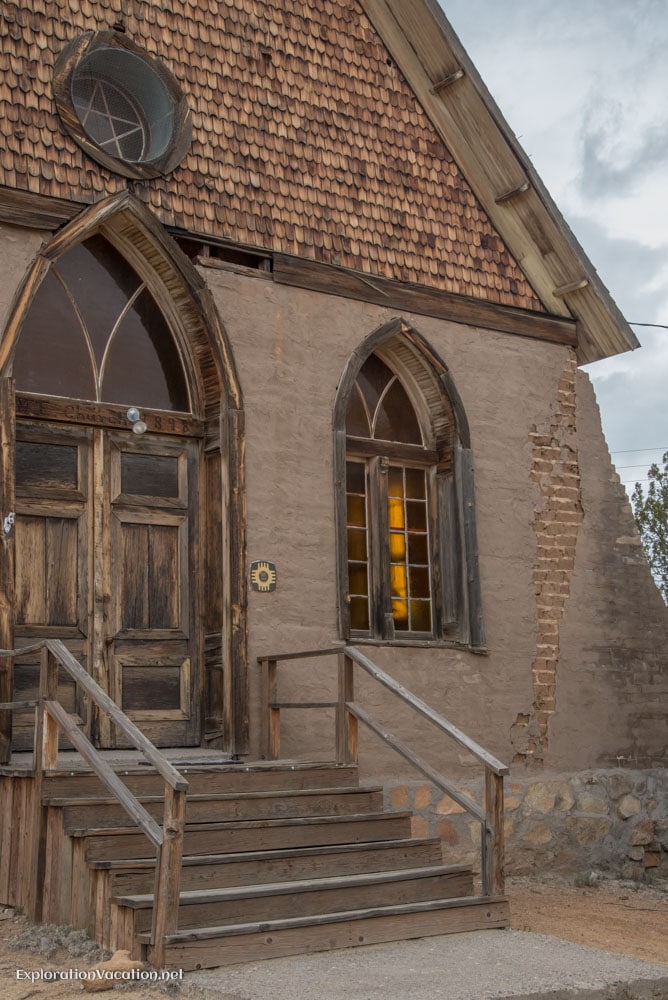 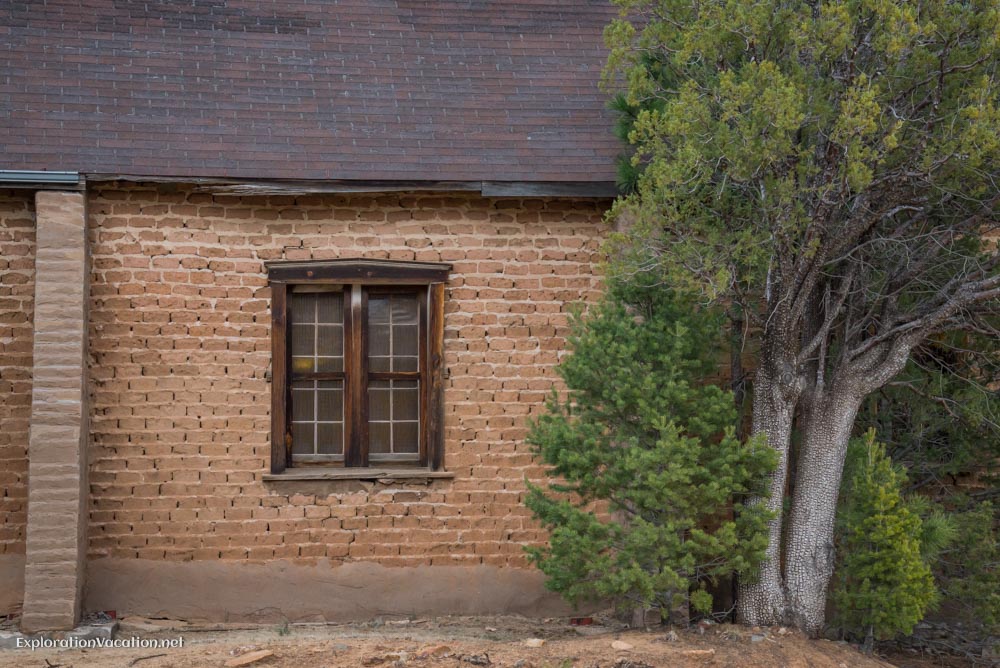 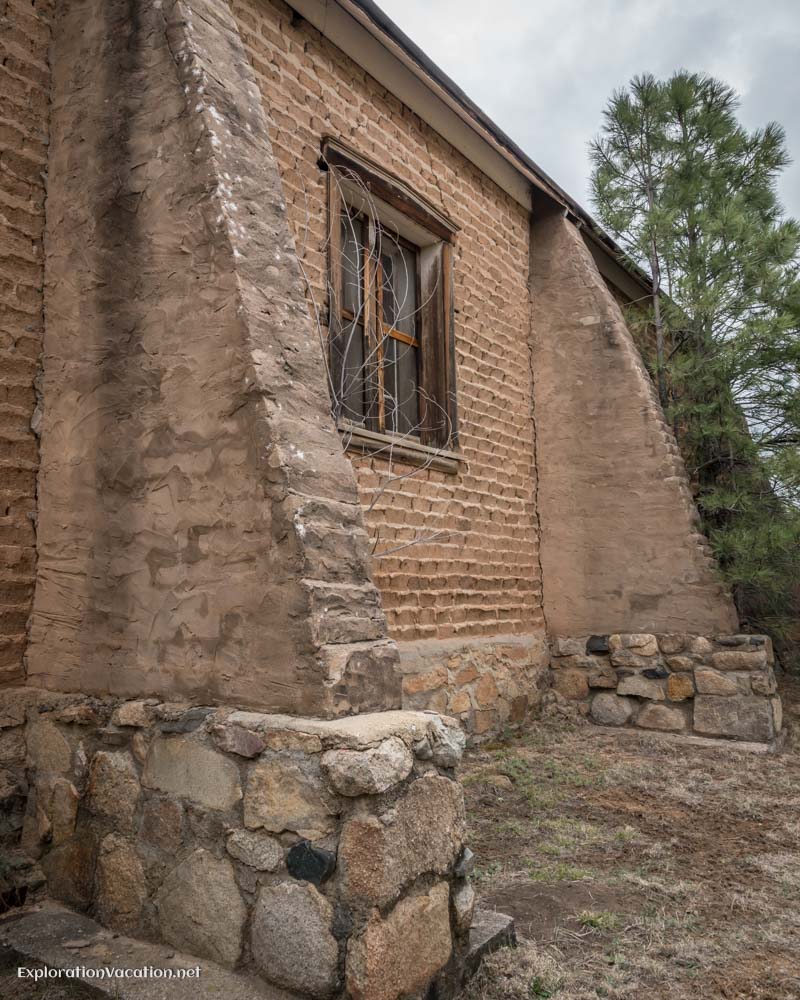 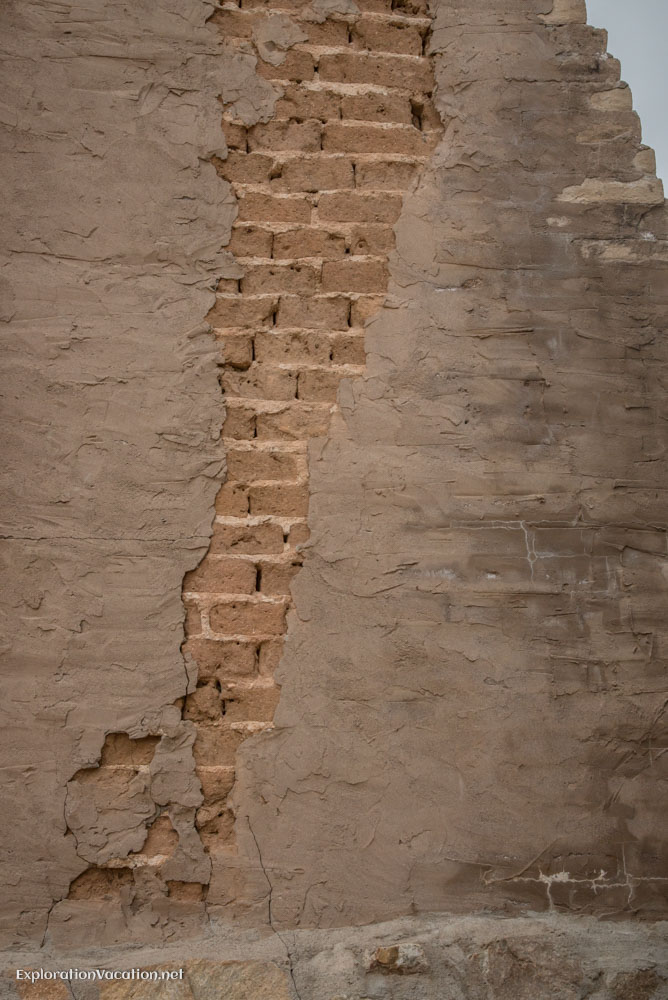 There are other historic buildings scattered around the town site, including the town’s original school and a few cabins. Some of these are still in use in some form, while others were abandoned long ago. 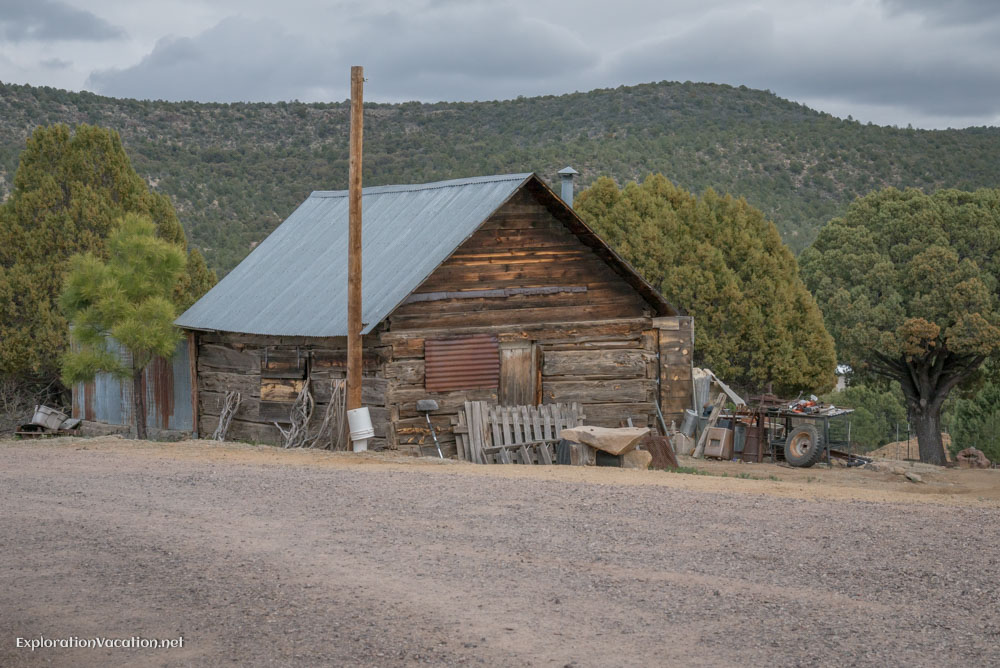 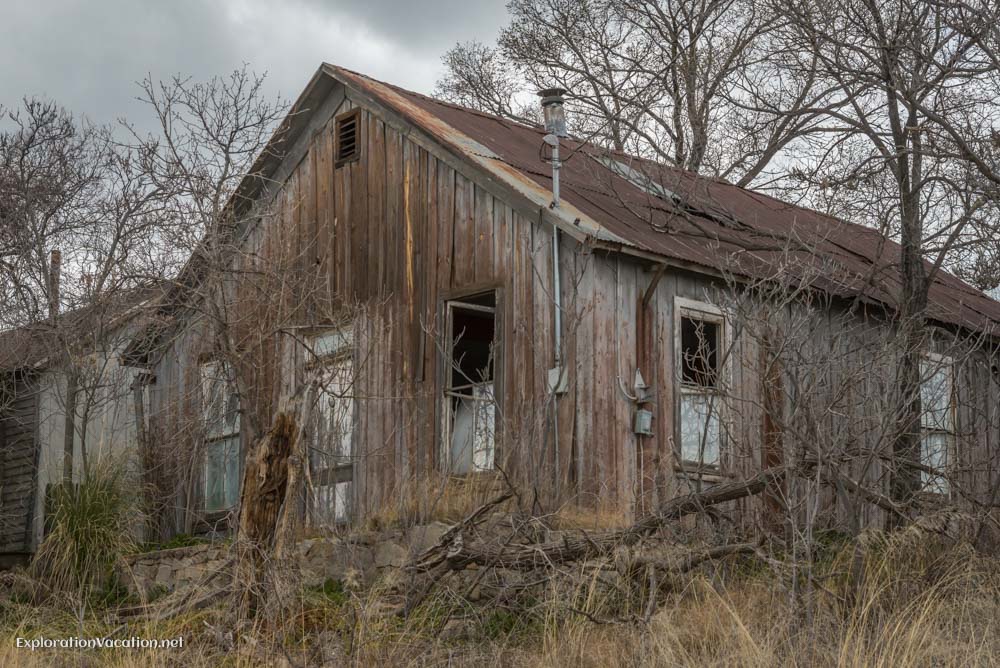 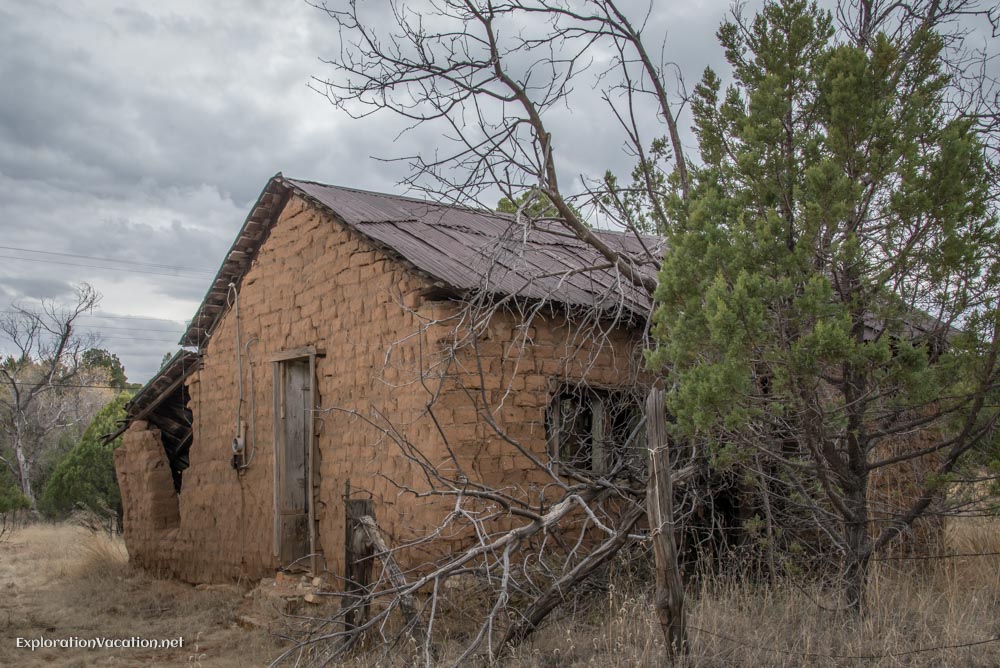 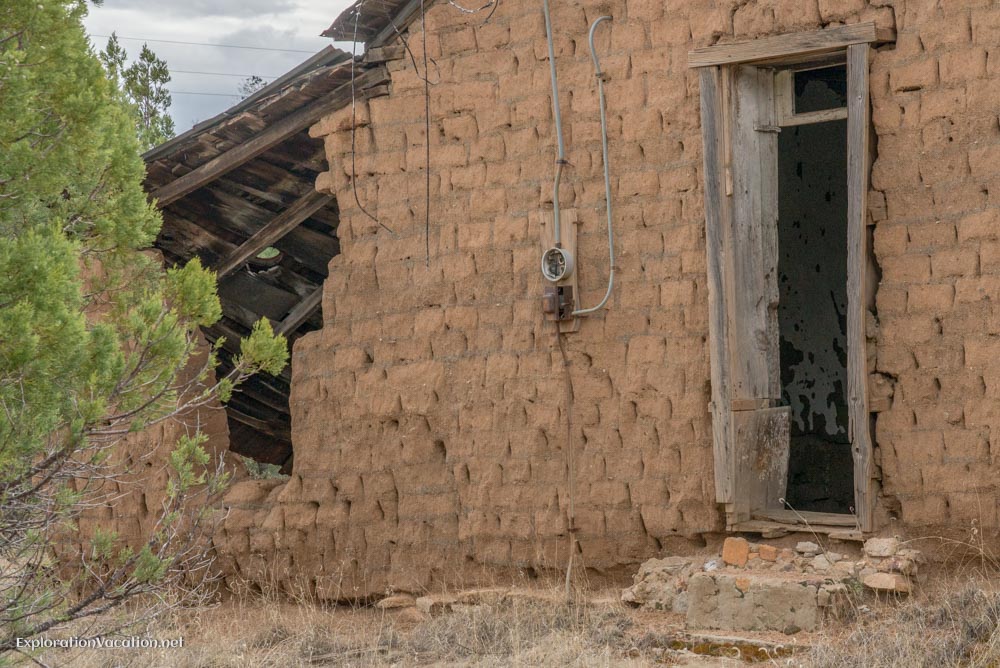 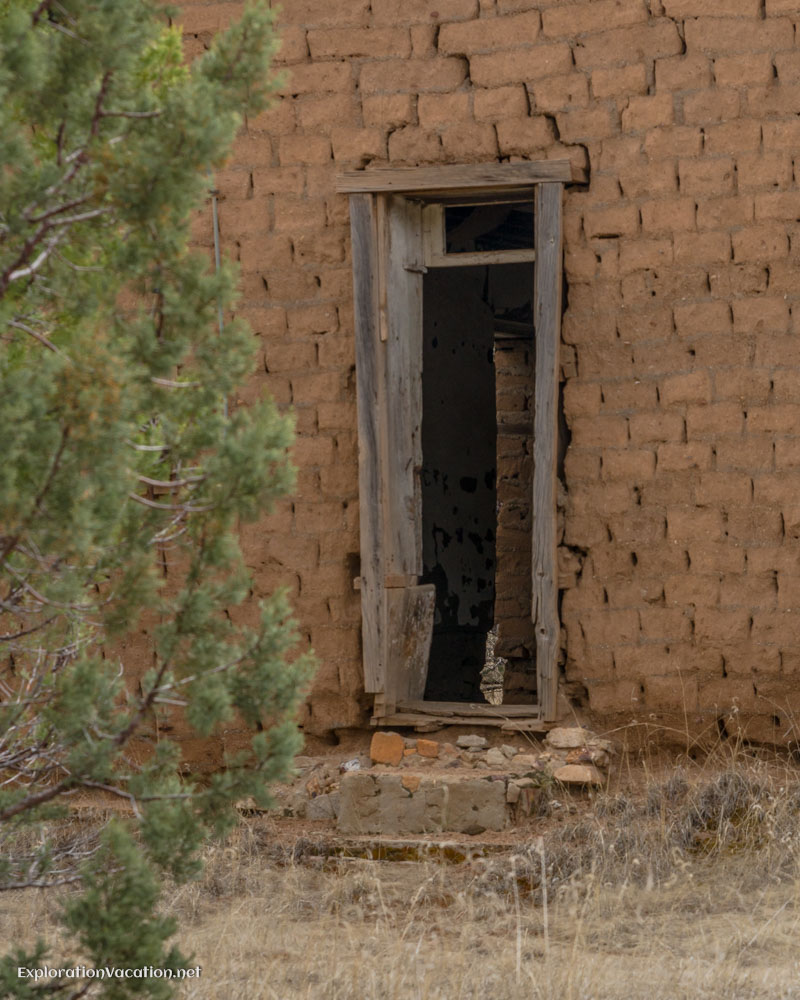 Not many people get to live and work in a mostly-authentic ghost town, but that’s life in Pinos Altos.