The colorful tile dome of the Old Pima County Courthouse is an iconic symbol of Tucson. 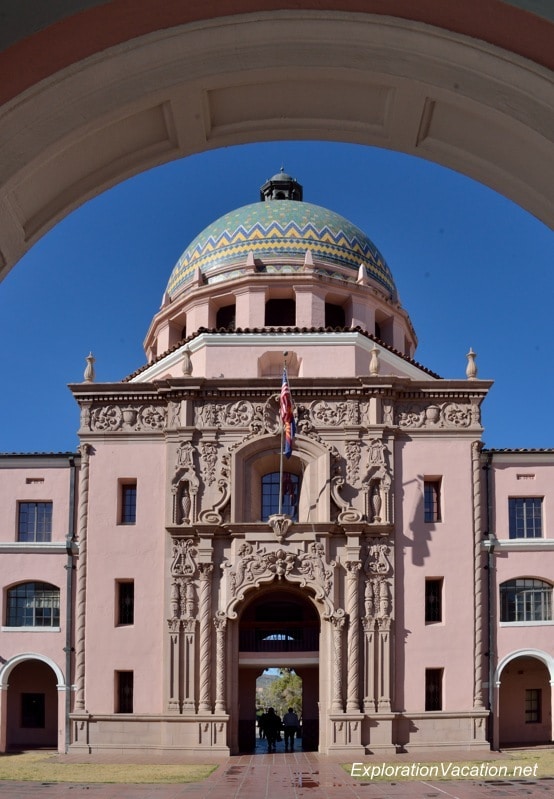 This is actually the third courthouse built in the city to serve the needs of Pima County.

The first courthouse was constructed in 1868. It was a typical adobe building, simple in style and constructed with “walls of adobe made of good dirt well mixed with straw.”

By 1880 Tucson was experiencing rapid growth and it was determined that a larger, more stylish and impressive courthouse was needed. In 1881 the second courthouse was erected. It was large two-story Victorian building with fancy gables and an elaborate cupola intended, at least in part, to show that Tucson was an important, modern city.

This courthouse remained in use until 1927, when it was demolished to make way for the current building, the “Old” Pima County Courthouse. By this time architectural preferences had changed again. Victorian buildings were out of style and southwestern cities were filling with seeking buildings with a connection to the past – or a glamorized version of the past. Spanish Colonial Revival architecture, with its mix of adobe, colonial, medieval Italian, and Moorish components provided a (largely imaginary) connection to the city’s past. When construction was complete in 1929, Tucson’s Victorian courthouse had been replaced by a pink stucco fantasy with a dramatic multicolored tile dome and loggia-wrapped courtyard. 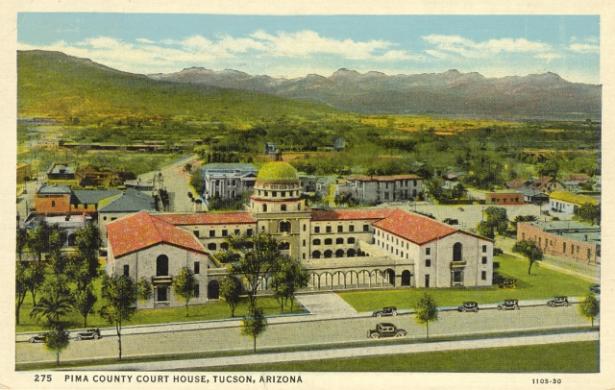 Although it was expanded in 1955, this is pretty much the building that exists today.

It is still a beauty.

From some angles a bulky concrete and glass building looms in the background. This is Pima County’s fourth courthouse. It was built in 1974 as part of Tucson’s urban renewal plans. Additional facilities were constructed in the years since and soon all court operations will be housed in new buildings. When this happens, some county functions will remain in the building, but there is talk of using the main floor for art exhibitions and other public functions. I hope this includes a full restoration of the interior and expanded public access, including access to Courtroom 8, the only remaining historic courtroom and the room where John Dillinger was arraigned on his fateful trip to Tucson in 1934.