Seattle probably isn’t the first place one would think of for a fall leaf-peeping tour, but the city’s sprawling Discovery Park can satisfy that longing for autumn color – with great views of Puget Sound thrown in as a leaf-peeping bonus!

Of course, we ended up hiking beneath towering trees with plenty of colorful leaves in order to get those views.

I could sense, but not actually see, the Sound behind all those trees.

But then the trail brought us to a high sandy bluff with sweeping views. 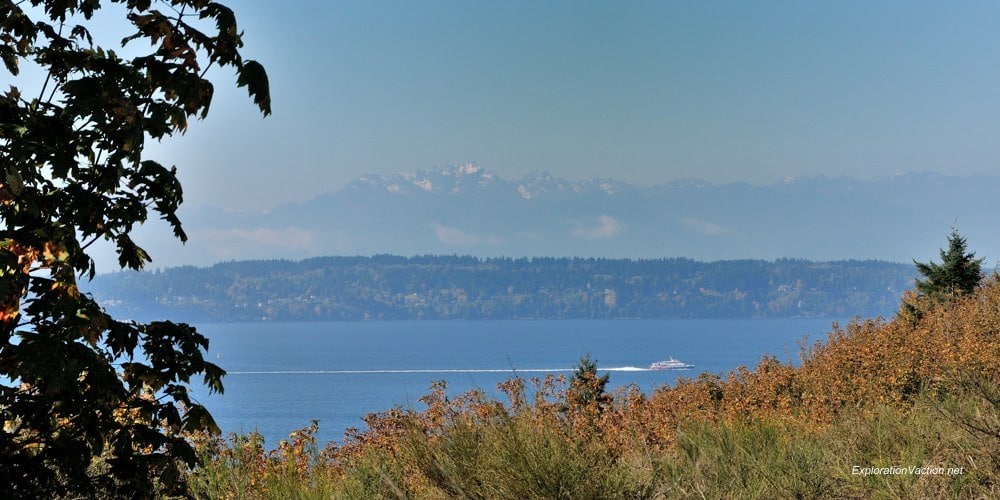 Just don’t get too close!

There are also rolling meadows clad in the subtle colors of fall.

That this gorgeous swath of parkland exists today is due in large part to its history with the military: Its use as a military facility saved it from development.

Established as Fort Lawton in late 1890s, this property served various military purposes over the years, but was never a major facility. It was clear by the end of World War II that the facility was too small to accommodate military flights and the value of the facility for military purposes declined. When the army and navy began closing facilities in the 1970s, large portions of the property became Discovery and Warren G. Magnuson parks.

By the early 1970s the Army and the Navy proposed major closures, and by mid-decade large portions became part of Discovery Park. Additional parcels were transferred to the city through the 1980s and 1990s. Today the park has 534 acres and includes two miles of tidal beaches, meadows, sea cliffs, forest groves, sand dunes, and streams. There are nearly 12 miles of trails and views of both the Cascade and the Olympic Mountains.

My visit was brief, so this only touches on all to see and do here. Next time I’ll get to the beach, tide pools, and the remaining buildings from historic Fort Lawson.