One of my traveling companions passed away last week.

More than a traveling companion, perhaps, since in some ways it is because of Dave Radford that I got hooked on international travel.

Dave’s had MS for many, many years – for as long as I knew him – and got around using a walking stick (think shepherd’s staff, not a little cane) or a wheelchair. International travel was not part of his retirement plan. However, after a couple of international family trips, one of his daughters (a good friend of mine) decided her parents should continue to travel regardless of her dad’s mobility issues. It was 1998 and she wanted to take them to Portugal. Her mother insisted she bring a friend along to help out.

I got to be that friend and the four of us went to Portugal that fall on what became one of the best trips I’ve ever taken anywhere, with anyone.

That wasn’t the only trip. Between the winter breaks in Arizona (see Dad’s and Daughter’s Day in the Desert), we traveled to Sweden, Fiji, and Botswana together. Those trips helped my husband and I develop our own love of international travel and the courage to head off on our own.

And those trips were always made more interesting by having Dave around. 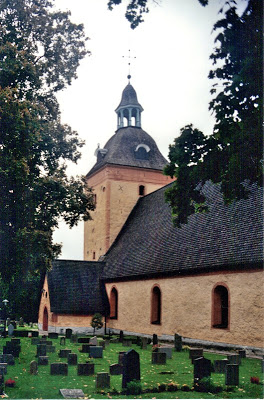 For one thing, you always knew there would be game of cribbage available if you had time to kill in an airport, in a cottage overlooking the Pacific Ocean, or in the shade of an acacia in the Kalahari.

Dave loved to challenge people. In a flea market in Sweden he found an old postcard with a picture identified as Ösmo Church. After demanding that I translate the message (a banal, the weather is fine, wish you were here message), he concluded that we simply must find and visit this church. Sweden is a big country – what was the likelihood I could even find this church, let alone fit it into our itinerary? I began searching maps and guidebooks. . .and the church was a few miles down the road, right along our route! Almost as surprising was the fact that about the only thing that seemed to have changed over the decades was the size of the trees.

Dave was good-natured about minor indignities suffered in order to get around. He didn’t mind being used as a luggage cart (we’d pile suitcases on him as we wheeled him through airports) or being repeatedly bumped over cobblestone streets and stone curbs. In Pena Palace  he got all the way up to the third floor, only to discover that the exit was via a three-story spiral staircase. We started looking for a guard to let us take him back through in the wheelchair, but Dave insisted he could just slide down on his butt. We got looks of horror from the other visitors (what sort of child treat an elderly parent like that?!), but Dave loved it. . . although I’m not sure which he enjoyed more: sliding down the stairs like a six-year-old or seeing those horrified looks directed at my friend and I.

On the other hand, Dave wasn’t a particularly adventurous eater. On our first night in Portugal he wanted to show off and ordered his meal in Portuguese – except he ordered “squid, no shrimp” instead of “shrimp, no squid.” Oops. Having been warned in advance that making a scene in a restaurant could result in the end of his world travels, Dave not only ate the squid without complaint (indeed, he made a point, repeatedly, of telling us how glad he was to have a chance to try it), but by the end of the trip I think he actually liked squid. (There were a lot of opportunities to eat squid in Portugal.)

Dave was curious, smart, and funny.

These are all good things in a travel companion. Of course, sometimes he was unintentionally funny, like when his refusal to wear a hearing aid meant that he could ALMOST, but not quite hear what I was saying and would repeat everything a few moments later, but turned into a question, a confused echo floating forward from the back seat. (“See the stork’s nest on that pole” came back to me as “Do you think we’ll see a stork’s nest?”) What can you do but laugh?

However, I think what really made him a good travel companion was the fact that he was profoundly grateful just to be able to travel. With MS and later, cancer, I think he appreciated the opportunity to see the world in a way that those of us who are healthy and take our ability to travel for granted never can. That appreciation made him willing to tolerate not only discomfort, but also indignity. He never let pride get in the way of doing something – if the price of visiting Portugal was getting bumped over cobblestones and sliding down a three-story staircase on his rear end, that was ok. It was just part of the cost of seeing the world.

Besides the trips I joined in on, during those years he visited Peru, Borneo, Rwanda, Bhutan, and Albania, along with more prosaic places like Germany and the Azores. He toured Victoria Falls via helicopter, visited mountain gorillas on their home turf, and saw his daughter get married on a beach in Fiji. My friend worked hard, really, really hard to make those trips successful.

Those trips took me to some incredible places and left me with great memories. A bunch of those memories are of Dave, who left me with many good stories and a few lessons for travel, for life really:

Thanks for the memories, Dave.

I’m really glad your daughter let me tag along on that first trip all those years ago.