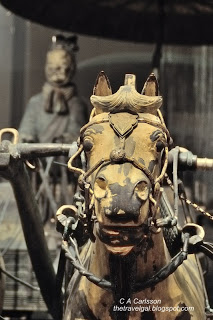 Since I just saw the Terracotta Warriors exhibit at the Minneapolis Institute of Arts, it seems like a good time to think about what I would see and do on a trip to Xi’an. (By the way, if this show comes to a museum near you, go see it! It’s a rare chance to see these beautiful, lifelike figures up-close.)

Not that this is a new dream destination for me. I read about the discovery of the army in National Geographic as a teen, amazed both by the concept (a life-size army of thousands made out of clay!?!) and the beauty of the figures. Someday I would see them for myself. Now I’ve seen a few of them (the MIA exhibit included ten human figures and four horses, a set of stone armor, and replicas of the miniature bronze horse and carriage sets, among other treasures from this period of Chinese history), but that glimpse increased my desire to see them in situ.

The massive army, estimated to have 7000 warriors, 140 chariots, 560 chariot horses, and 124 cavalry horses was created by Qin Shihuang, who ruled from 246 – 210 BCE, becoming the First Emperor of a unified China. Throughout this time, apparently, he was also considering his afterlife and making preparations, including ordering construction of this massive army.

Created to protect his tomb for eternity, the army is aligned in fighting formation in pits in front of his tomb. It was covered over, but damage during rebellions in the years following the Emperor’s death. However, the creation of the army was not documented in ancient records and its existence was unknown and unimagined until farmers discovered it while digging a well in 1974.

The entire burial complex (believed to be the largest in the world) is a UNESCO World Heritage Site. Excavation of the site has revealed many wonders, including more than 2,000 warriors and thousands of real weapons.

Much remains to be excavated, including a large portion of the pit containing the main army (damaged during the rebellions) and the Emperor’s burial tomb (where excavation has yet to begin). There is likely more as well, since new pits containing other terracotta figures and life-size bronze birds have been found in recent years. Most recently, the remains of an ancient imperial palace were found. I’m sure there is much more waiting to be discovered – despite tantalizing hints in ancient records, no one really knows what other treasures await here.
Since only a small portion of the site is likely to be excavated within my lifetime, I’ll never know what lies hidden there. This seems like even more reason to visit speculate on what might lie below the surface.

Most of the surface of the site is open to visitors as the Emperor Qin Shi Huang’s Mausoleum Site Park, which consists of two separate components:

Most people visit the terracotta warriors as part of a day trip, but I’d like to find a volunteer program that would allow me to spend more time getting to know these guys a little better and helping support their preservation. (There have been some of these available in the past, so I’ll hope that there will be opportunities in the future.)

This rather over-dramatic episode of the PBS show Secrets of the Dead discusses some of the latest (fascinating) scientific discoveries related to the terracotta warriors, including theories on their actual construction. (The show repeatedly claims the army was created in the 11 year period after the unification of China and demonstrates how that would have been possible. Other sources indicate that this project probably began earlier.)

Watch China’s Terracotta Warriors on PBS. See more from Secrets of the Dead.