As a birthday present to ourselves, my college roommate and I traveled around the northern half of Ireland in the early spring, spending our time in Northern Ireland (Ulster) and the counties of Dublin, Louth, Meath, Cavan, and Donegal in the Republic. We started out with a general itinerary, but almost no hotel reservations, allowing us a lot of freedom. It was a wonderful trip, filled with great memories. Here is a taste.

“But I reserved an automatic”

Our adventure started right at the airport, where the young man at the car rental counter offered to upgrade me to a brand new manual transmission vehicle.

“I’m sorry, but I reserved an automatic.”

“You don’t want one. The automatics are all bad – they are old and beat up. This car is new, bigger, and much nicer.”

“I’m in IRELAND. I need an automatic.”

“You drive a manual at home, don’t you?”

“Well, then you can drive one here.”

“But everything is on the other side!”

“You’ll get used to it. It’s easy. You can practice in the parking lot.”

My girlfriend didn’t drive a manual even at home, so she wasn’t about to drive one here, so in saying yes I was committing myself to doing all of the driving during this trip. But the car was brand new and beautiful, with about 200 miles on it.

By the end of the trip I mostly liked driving in Ireland, although I’m not sure my friend ever felt comfortable in the passenger’s seat (those hedgerows must have seemed awfully close). I was lucky in that she was used traveling in England, kept up a mantra that went “to the left, to the left, to the left. . . .” My own internal tune was “driver in the middle, driver in the middle” as in “the driver is always in the middle of the road,” which is also a handy thing to remember when returning home after a driving trip in Ireland! 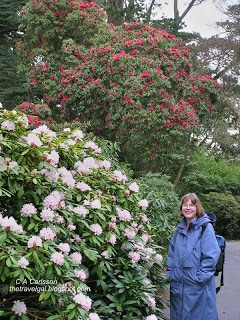 The rhododendrons were in bloom while we were in Ireland, huge trees full of flowers.

I’d never seen anything like it before and wandered about both Castlewellan and Mount Stewart Gardens in a bit of a daze. It was simply glorious. (And then there were those fields of daffodils!)

Having spent too much time hiking in the Glens of Antrim     (where we went from hot sun to rain, snow, sleet and hail over the course of 20 minutes), we ended up at the Giant’s Causeway  late in the afternoon.

The sun was blindingly bright, but the wind was howling and I was really sick of driving (as noted above, my friend can’t drive a manual). We could tell we wouldn’t be going out to the Giant’s Causeway, so our attention turned to where we would spend the night. My vote was “right here.”

There was lodging near the Causeway, in a huge old ramshackle inn, but it wasn’t cheap. It was memorable though. The whole building shuddered and shook when hit by a particularly strong gust. You could hear the shutters rattling in every room and rain and sleet slammed against our window all night. It was like the setting of a Gothic novel come to life.

She started: “I’ve been spending quite a bit more money than I budgeted.”

There was a long silence as we considered each other. I knew she was right and that we needed to start being more frugal. I just didn’t want to.

Finally she said, “I think I’m worth it, how about you?”

The city of Derry has wonderful solid walls around much of it, walls perfect for walking, so that is where we started our tour of the city.

My friend knew much, much more about The Troubles than I did, so she understood what we were seeing, explaining to me that the modest neighborhood below us was Bogside, the heart of the Catholic community in what has historically been one of Ireland’s most religiously polarized cities. Even without knowing much about that history, its weight seemed tangible – sad and heavy. We spoke quietly, our voices dropping lower and lower to avoid being overheard. We weren’t sure it was ok to even talk about that history – it hadn’t come up anywhere, in any conversation – and now an older man was pacing just behind us, watching us, perhaps listening in.

Uncomfortable with feeling we were being watched, we decided to move on. Of course, I was slow to actually move, since I had to take a picture first. As my friend walked away, that older gentleman walked up and greeted me.

I tried to evade him, but he reached out and pushed a scrap of paper at me. And I do mean a scrap. It was poorly photocopied and folded into about a 2” square.

“This explains the real meaning of the coat of arms of Derry. You can’t get this from anyone else.” 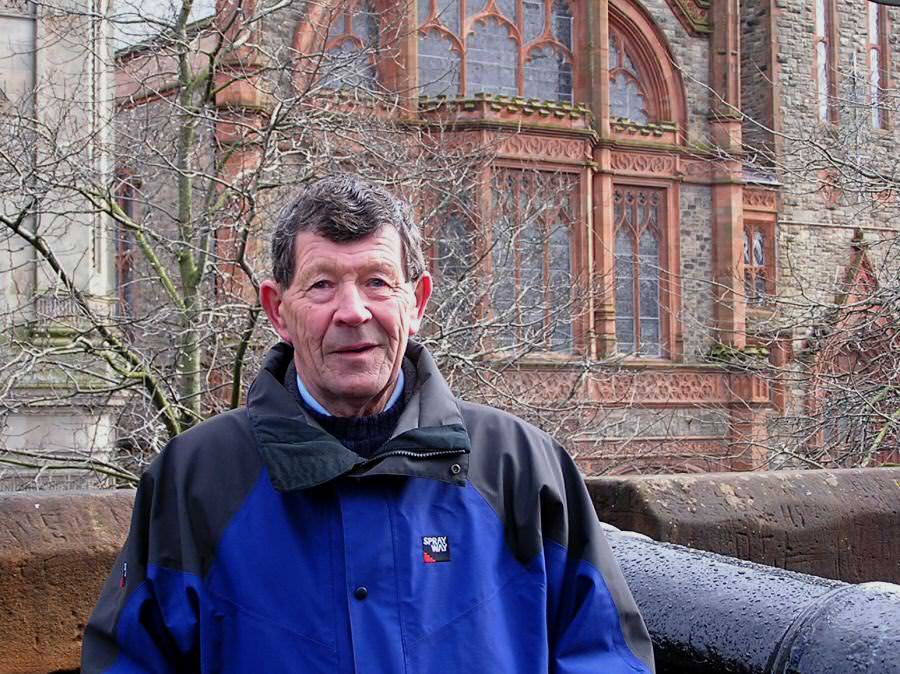 Oh oh. What kind of a wacko have I run into? I shot my friend a panicked look – help me escape! He must have seen it too, because at that point he introduced himself. I didn’t catch his name (that lovely Irish brogue!), but I did understand he worked for the city of Derry and immediately everything was fine. I’m a city planner by training, so anyone with the city had to be ok. Besides, someone with the title City Ranger might be able to answer my questions!

We were fully engaged in conversation by the time my friend cautiously came over to figure out was going on. The three of us spent the rest of the morning walking the wall and wandering the city streets. In the process I learned more than I ever could have hoped to from this knowledgeable and engaging man.

There were a few (a very few) other people on the wall that morning. I have no idea why he selected us to approach, but I’m so glad he did. . . and glad that the concept “city employee” sunk in enough to overcome my fear of a stranger.

The Book of Kells

I love illuminations and was really looking forward to finally seeing the Book of Kells for myself. I was not disappointed – it was even more beautiful than I had expected it to be and was housed in a gorgeous, informative exhibit space. I’m not sure which astounds me more: the effort and artistry that went into the creation of the book itself or the fact that this fragile artifact has survived to create a physical connection to an ancient time. It’s so human.

I wished I could have seen more than four pages, but that is an incentive to return to Dublin regularly.

(Graves in a ruined abbey in County Cavan)

1 thought on “Memorable Travel Moments: Touring the North of Ireland (2004)”