Topkapı Palace served as the primary residence of the Ottoman sultans for about 400 years (between 1465 and 1856) until Domabahçe Palace became the official residence. Established as the seat of government for the Ottoman empire, at its peak, Topkapı was home to up to 4,000 people. The grounds included housing, mosques, governmental meeting rooms, kitchens, a mint, and a hospital. Built by the formerly nomadic Ottomans, the palace resembles an elaborate tented encampment captured in stone, with the assorted buildings set in a series of courtyards.

We enter the first of these courtyards through the imposing Imperial Gate (Bâb-ı Hümâyûn), where the sultan (probably on horseback) would have entered.

Today the First Courtyard is mostly a park where the former Imperial Mint and the Hagia Irene sit amid grassy lawns and beds of brilliant tulips.

Hagia Irene is a smaller version of Hagia Sophia and one of the few remaining Byzantine churches never converted to a mosque. Sadly, it is seldom open to the public and this is as much of it as I will see on this trip.

The Gate of Salutation (Arabic: Bâb-üs Selâm) will lead us into the main part of the palace and the Second Courtyard.

It is a bustling place, where groups gather before entering the palace proper (an entrance fee is required to go beyond this point). Children line the walkway, smiling and waving to us and everyone else. Clearly this is a popular place to visit!<

Once through the gate, we find that the second courtyard houses a number of buildings, including the kitchens (with a dramatic set of chimneys) and the elegant Gate of Felicity. I take a quick look around, unable to absorb it all, not sure where to look first.

As it turns out, it doesn’t matter that I’m a bit overwhelmed by it all, as we are immediately herded toward a building just off to the side.

I really want to check out the glittering building (the Divan) that adjoins the rather plain entrance where we are being directed . . . My disappointment is short lived, however, as I hear the magic words “the harem.” We are beginning our tour at the Imperial Harem, which is very high on my must-see list for its beautiful tile work.

It doesn’t disappoint. We move (too quickly!) through room after room of decorative tile and detailed painting. (I have so many pictures I’m giving them their own post. If you want to see more, jump to The Harem.)

I am totally disoriented when we leave the harem, but it appears we are now in the Third Courtyard. It’s a park-like space  nestled between the Harem, the Privy Chamber, the colonnaded porticos of what was once the Conqueror’s Pavilion (which seems to also be part of the Imperial Treasury), and other buildings, some more dramatic than others. In the midst of it all is the elegant Library of Ahmed III. It’s lovely, but a bit of a jumble. 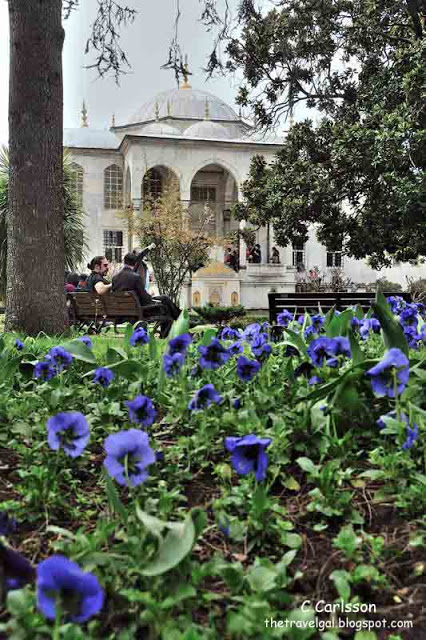 The only of these enticing buildings we actually enter are part of the Treasury and its collection of precious objects. Everyone wants to see these so it is really crowded and I’m not big on crowds. I assume the Emerald Dagger is on display here, but I don’t see it.

It’s just too crowded for me to work my way through the crowds to  every display case. That’s ok, as there are plenty of other sparkly things that I do get to see. It is more than enough to give me a sense of the over-the-top opulence of the Ottoman court.

We also find our way to the Imperial costume collection, housed in the Dormitory of the Expeditionary Force. Ottoman practices related to the clothing of the emperor are a textile collectors dream: on the death of the emperor, his clothes were neatly folded and stored away. That practice has led to an impressive collection. While there are only a few items on display, they are all interesting (I’m not sure how they would actually wear some of these pieces) and show-off some amazing fabrics.

However, the best thing we find might well be the uncrowded open-air porch and its views over the remains of the ancient Byzantine walls and the Bosporus beyond.

There is also a restaurant down there – which is nice, since I’m getting hungry.

It turns out that we even have our pick of tables! (The window in the background is where the above photos were taken. It’s a long way up.)

It’s starting to rain as we finish lunch, so we rejoin the group (who ate in another part of the restaurant) and head for cover at the Divan.

This is the glittering space where the viziers and other officials of the Ottoman Empire once met. 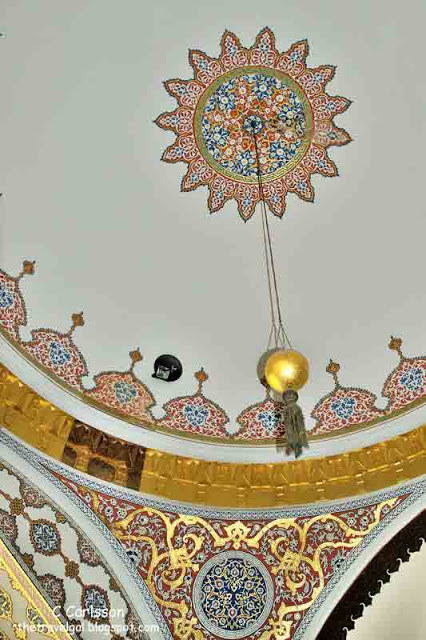 While they had to always be on guard, never knowing whether or not the sultan was listening in on their deliberations, we find it a welcoming spot to wait out the rain.

The pigeons like it too – what a lovely spot to call home.