The Department of the Interior’s building has been featured on this blog in the past, as we are big fans of the Indian Craft Shop.We start our visit in the Craft Shop this time too, although it takes us a moment to find it, as it has been relocated while restoration is underway. What hasn’t changed in the wonderful collection of objects for sale.

Hmm . . . can this come home with me?I’ll have a chance to ponder that question, since we are here today to take the mural tour – I finally get to see the Ansel Adams murals!

We are lucky in that no one else is signed up for today’s tour, so we have the guide to ourselves. (The better for asking inane questions or making small detours to see what sort of Native art the Bureau of Indian Affairs has on display around the building.)

Our tour starts in the library (the museum is closed during this round of renovation) where we get to see one of the few remaining original door handles – over the years various staff have taken most of them as retirement souvenirs. (People are so greedy.) From there, we begin the tour.

When the building was constructed at the end of the ‘30s, 1% of the construction cost was dedicated to art. Hence, the murals. (On this tour we only see a portion of them, as a number are undergoing restoration or are otherwise inaccessible due to building renovation.) In general, the painted murals are of only modest interest to us, although there are some interesting surprises, like the socialist themed “Construction of a Dam” by William Gropper.

I recognize the 1930s era socialist worker imagery and styling right away, but I wouldn’t have noticed the Communist symbolism without our guide pointing it out. It represents a period in US history from which few remnants survive – it’s fun to find one tucked away in a government building!

There are also a number of murals celebrating the achievements of African Americans. Our guide notes that the Secretary of the Interior at the time, Harold Ickes, was a supporter of civil rights and was particularly proud of the fact that the Department was able to offer up the Lincoln Memorial as a venue for Marian Anderson when DAR prohibited her from performing at Constitution Hall.

Even though I’ve written about this before, I’m taken aback to really realize that this occurred in 1939. Yes, 1939. That is a long time before Martin Luther King’s “I have a dream” speech. It took that long for the civil rights movement to gain a real foothold in this country? And, obviously, we still aren’t fully there yet.

Almost none of the murals by Native artists are accessible right now, but there are a couple major ones in the cafeteria, including the “Harvest Dance” by Kiowa artist James Auchiah (Tse Koy Ate or Big Bow).

(Both artists were part of the Kiowa Five, a highly respected group of Native artists.)

Although it is easy to think of these as idealized images of Indian life in the past, both of these artists were products of mission schools. Only recently had it become legal for them to investigate and participate in traditional practices. For Native peoples, this was a time of rediscovery. For the Department of the Interior and, particularly, for Secretary Ickes, this was an opportunity to highlight the changed attitude toward Native people and their culture. It was a time of celebration of that culture, but also (for Native people, if not for Ickes) a time to take stock and mourn what had been lost.

Those opposing themes tug at each other throughout much of the building’s artwork, much of which has an almost tangible tension between a celebration of the wildness of this country and the domination of that wilderness.

Of course, we are really here to see the Ansel Adams murals. I’ve been waiting for this for a few years (you need both time and an advance reservation to view any of the murals) and am thrilled to finally get to see them . . . which may be one of the reasons I am disappointed by them.

First of all, they are not “giant murals,” but simply large prints. I wanted wall-sized MURALS. 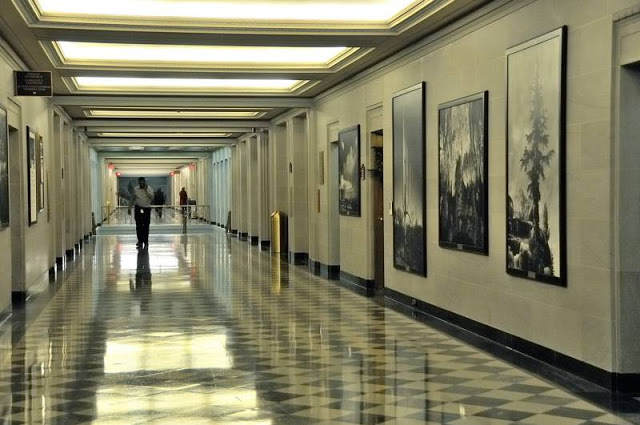 Second, the images weren’t printed by Adams. The project was never actually finished after being interrupted by World War II – the images were only recently printed. Adams darkroom work was a critical component of his work. The lack of his touch is obvious.

Still, it is exciting to see how Adams handles subject matter outside his usual canon, like children and industrial facilities. (The Old Faithful shots are nice, but they comprise too large a share of the prints on exhibit.)

So, while it is nice to see the Adams prints, there is a lot more of interest here. I’m looking forward to returning when this round of renovation is complete.