We saw lots of white rhinos when we were in South Africa – far more than I expected to see – and some in very unexpected places, like this group in Kruger. 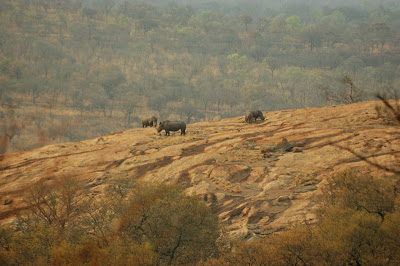 What we didn’t see were black rhinos.

Hluhluwe-Umfolozi Game Reserve is famous for its white rhino breeding program, but we learned while we were there that black rhinos have been much more challenging to re-establish. The park regularly relocates rhinos, but I didn’t hear anything about transporting rhinos by helicopter!

Today the Picture Show on NPR features images of black rhinos being transported via helicopter to new, safer homes. They are great images!