A guidebooks describes Køge as “one of Denmark’s best-preserved medieval towns.” It seems like a good place to take a break on our way south.We end up parking at the edge of downtown, in a lot enclosed by a residential/commercial complex. It doesn’t look very interesting, although the adjacent street looks as if it might be if we continued along it a few more blocks – there seem to be some brightly painted houses that warrant a look-over.

Lane, however, heads the other direction to check out the restaurants housed in the complex. I don’t see any reason to eat yet (especially with a new town to explore) so continue on past him out of the complex where I can see there is a beautiful garden across the street.

Ok, so it turns out to be a cemetery, but it is still beautiful.

Just down the street, the historic buildings bustle with shoppers.

Even now, past midday, the Saturday market is still going strong in the town square, with vendors selling local fish, honey, jewelry, and early vegetables. However, on this early spring day, it seems the cheery cut flowers and bedding plants draw the longest lines.

The market square is lined with historic buildings; not sure which direction to head, we just start walking.

Køge boasts the oldest town hall still in use in the country. . . I’m not sure which building that is, but I do notice the new (1970s) expansion.

I suspect a lot of people hate this building – it is literally the only modern building here – but I like it. It has its own authenticity. Like the historic buildings here, it speaks to its own time and place. I suppose a fake old building would have blended in and made for prettier streetscape, but it still would have been a fake building. (Besides buildings here vary in vintage, with a number that probably date into the 1800s, so which vintage should they have emulated?) And, like the glass pyramids at the Louvre, sometimes the best way to add something new is to make it as different from the old as possible!

Just down from the city hall is the Køge Museum, which is housed in a an impressive 17th century building.

Nørregade Street, where the museum is located, is also a busy shopping area.

The shops look enticing, but we have lot of miles to travel today – it is shop or sight-see, so we continue our exploration. I wish I had more time!

Nearby is Sankt Nicolai Kirke, which dates from 1324 and has an impressive traditional church tower (from a later date) that apparently also served as Denmark’s first lighthouse.

Usually I would go in and check it out, but I can see that the next street over is filled with brightly painted half-timbered houses. . . 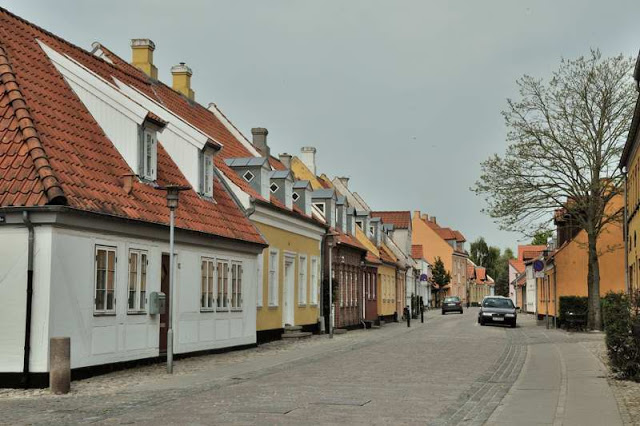 These 16th and 17th century houses form an attractive neighborhood.

I never felt that I would want to live in Copenhagen, but I could live here.