I want to see Møn’s famous fresco-filled churches by the Elmelunde Master, a 15th century artist responsible for the decoration inside a number of churches about whom almost nothing is known. We come first to Fanefjord Church, which is not the most famous of these churches, but since we are here it seems we should stop for a quick look.Like so many other churches, this one sits on a slight rise with views of the sea.

It is a striking setting for the striking 13th century church, but the rain is about to come, so it seems like a good time to go inside.

Inside I find a large tour group holding their guidebooks above their heads as they try to match the printed pages with the images swirling around them in the dim light. (If you want an online guide to the images, there is a directory on Wikipedia.)

It’s an odd scene, but the interior itself is rather odd.

The walls are awash with Biblical characters, a cast of supporting characters from Biblical times through the middle ages, and a variety of busy demons. 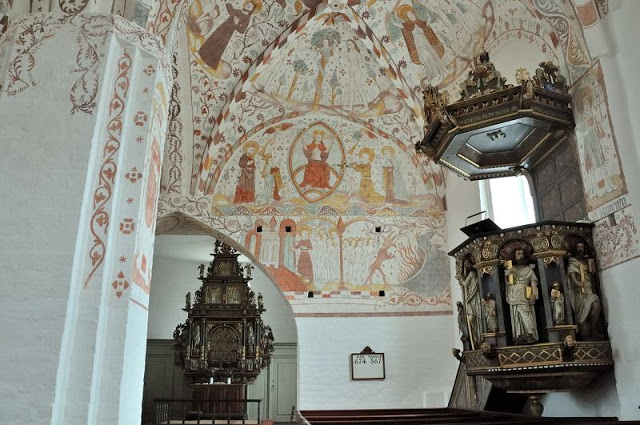 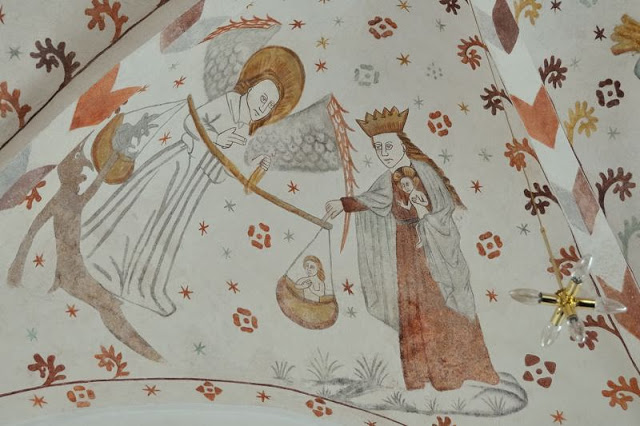 (They date from two separate time periods, the oldest going back to the 1350s, while the majority are the later work of the Elmelunde Master.)

While I’m relieved when that the group finally leaves and I have this place by myself, I rather miss them when the room darkens further as the storm arrives with rain pounding against the windows and roof. Maybe it is simply the abundance of painted demons populating the room, but, instead of a refuge, the church feels eerily occupied by invisible beings that resent my presence here. Like the evening wind in the ruins at Mesa Verde, they seem to whisper “You do not belong here. This place belongs to us – leave now!”

I keep shooting in an attempt to ward off their presence, hoping the familiar motion and need for focus wards them off.

I am relieved when the storm passes.