I’ve been looking forward to today’s field trip, but Chris has been threatening to give an assignment I will hate.

Sitting at my computer writing and editing photos in the lull between breakfast and when we will meet to leave, I realize what the assignment will be: We will be limited to taking only a certain (very small) number of photos. The only question is how many shots will be allowed: 10? 20?

Soon we gather to leave and, sure enough, we are told that we are only allowed 20 shots. (I’m really not psychic. Based on the habits of a couple of us, it was pretty easy to see this coming.) Not only are we limited to a small number of shots, but all 20 need to be taken at the same focal length! Oh my.

At first I’m really crabby, but it occurs to me that neither Chris or Rick seem capable of actual meanness – I’m pretty sure that once I’ve taken my 20 shots I’ll be free to shoot more for myself. Of course, I don’t actually know that this will be the case and the place we are going sounds as if it will be really cool. . .

Actually, all any of us know about Architectural Park La Scarzuola is that it combines a convent founded by Saint Francis of Assisi with a “Profane City” created by Italian architect Tomaso Buzzi and that Sister Giovanna recommended it over the Monster Park that Chris and Rick had originally planned to take us to.

Apparently it is a pretty obscure place, as even our driver Rita seems to have never heard of it. She runs in for a quick consultation with the staff (and Google) to figure out where we are going.

And then we are on the road.

It is a long, lovely drive to the park (so long that, for awhile, I wonder if Rita has gotten lost), but I’m still in a bit of a funk so don’t enjoy it as much as I should.

Finally we see a sign and soon we are greeted by Brian, who will be our guide to this strange place.

We begin our tour in the church, a structure of unknown age that has been periodically abandoned over time. It is/was part of a convent (a generic term for a religious complex in Italy) that is believed to have been founded by Saint Francis in 1218. The church, however, had been periodically enlarged, altered, emptied, and abandoned before being ripped apart by Buzzi in the years after he purchased the property in 1956. (Brian seems pretty much equally horrified by the abuses of the Franciscans and Buzzi.)

It’s a walk though a three-dimensional puzzle. Brian points to areas where renovation has uncovered (and, in some cases, reconstructed) the church’s past as well as places where it has simply deepened the mysteries hidden here. It’s a work in progress, evident in the sheets of frescoes – removed and restored and now awaiting installation – that lay in sheets on the floor near a side alter. The alters themselves hold a gaudy mix of sparkly of objects. All in all, it seems to be more of a slightly surreal re-imagining than a restoration, but it is very cool.

Back outside we stop by what was once a fish pond on our way into the park.

As he talks, Brian runs his hand through the still water, creating lovely ripples that warp the reflection of the adjoining building. I’ve hoarding my 20 shots like a treasure that, once spent, can never be regained. Time to cash one in.

Once the rest of the group moves on (and their reflections vanish from the pool!) I ask Lane to create ripples in the again still surface.

He wiggles his fingers in the water.

I give up and take my shot.

Then I run my hand through the water, showing him what I wanted.

He gets my shot. 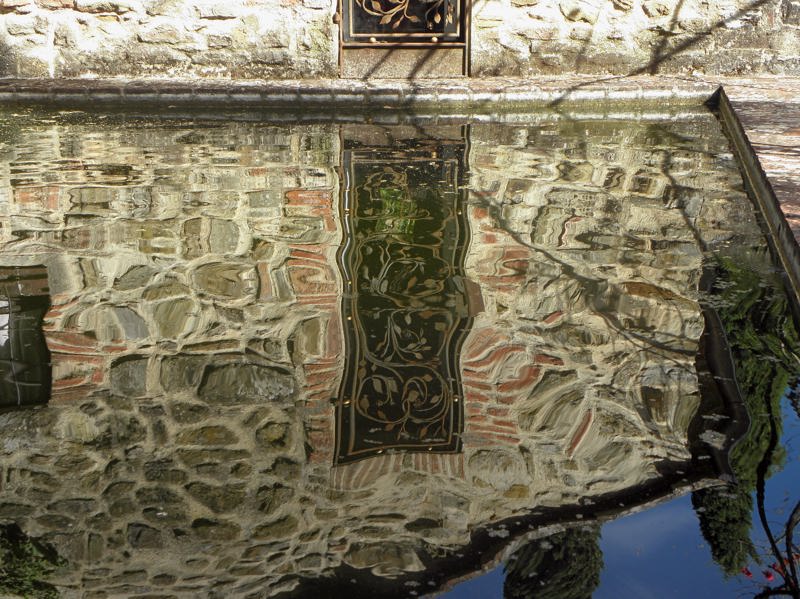 I’m not off to a good start.

The park itself consists of a series of grotesques and slightly undersized buildings, many piled atop each other, that form a complicated theater complex. We tour the area as a group with Brian explaining the rather esoteric logic behind these structures before we are allowed to wander freely on our own.

It’s a hard place to describe, but this is what I captured in my 20 precious shots: 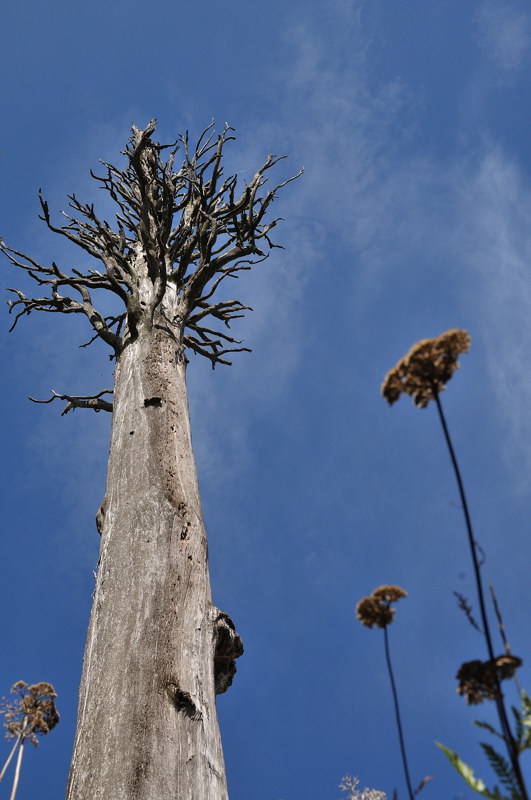 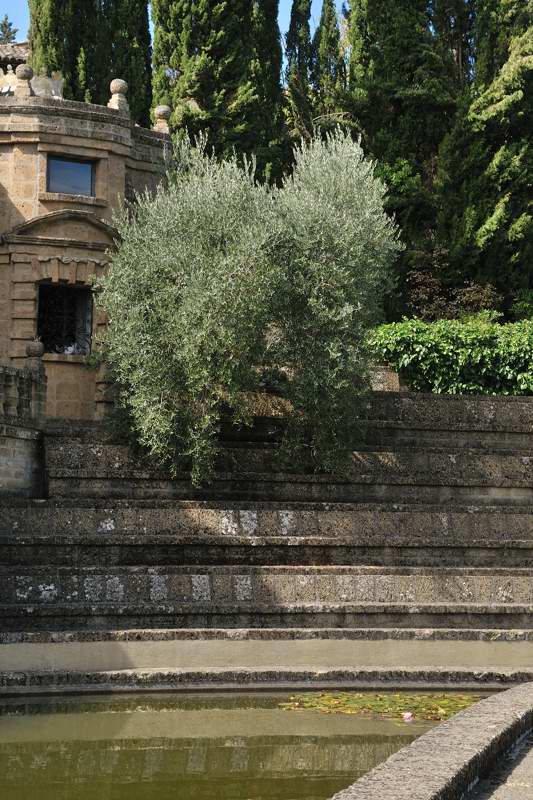 And what Lane captured in his (somewhat greater number of) shots: 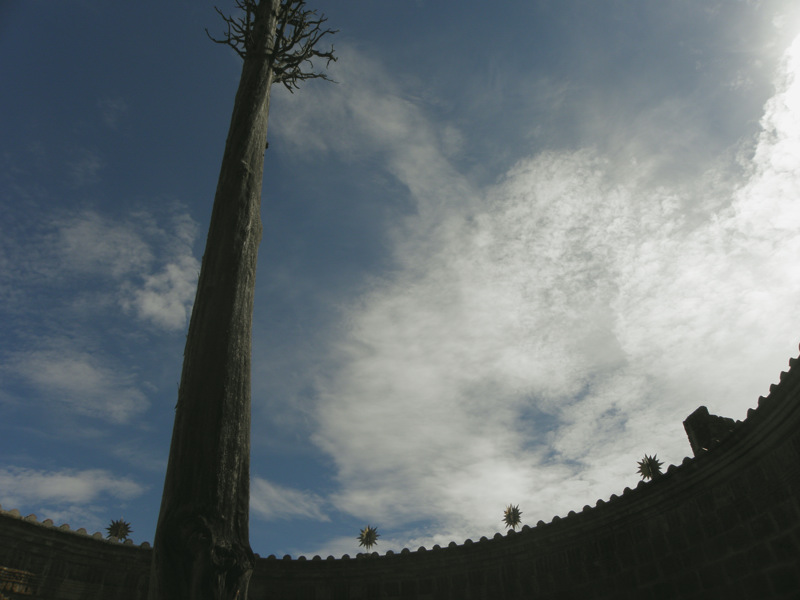 (Yes, he probably is the better photographer. I just have more interest.)

I save a few of my shots to return to the church, but we are almost out of time and I am tired from the hot sun and from thinking so hard about what I will or will not shoot and how to shoot it. Inside the church I burn the last of my 20 shots photographing Chris as he tries to get a good picture of a rather hard to view fresco of Saint Francis “levitating.” (Apparently this 13th century fresco is not only very old, but also very unusual and Brian has requested a professional quality photo.)

By now Rick has confirmed that the intent had indeed been to let us shoot as much as we wanted after we finished our required 20 shots for class. He clearly feels bad that the tour didn’t leave us with enough time to go back and do that, but I’m ok with it – I’m exhausted from being so focused on making each of my shots count (and keeping track of how many I have left) that I really don’t have any interest in going back to try to capture the shots that got away.

I’m pleased just to shoot inside the church while we wait for everyone to gather.

It is pretty over-the-top. But very, very cool.