Michele and Norman are coming to visit!Norman is an architecture buff and Michele worked in downtown Minneapolis many years ago, so a tour of downtown might be a good place to start. 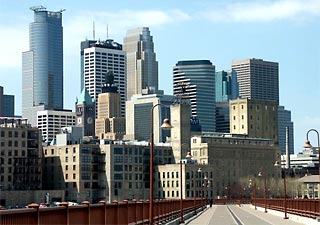 We could start along the river, an area that will be unrecognizable to Michele now that it has filled in with condos and luxury apartments.

Jean Nouvel’s dramatic new home for the Guthrie Theater is certainly worth a visit, with it’s yellow windows and dramatic river views.

We just saw Rebecca Gilman’s Dollhouse, which was excellent and just ending its run, but A Streetcar Named Desire is also is also playing now, so there are theater options should we actually wish to take in a show.

Farther along the river we could loiter along the locks and on the elegant Stone Arch Bridge.

Then there is the Mill City Museum where the story of the flour industry that built Minneapolis is told inside an 1880’s mill that was basically destroyed by fire in 1991. There are great (mostly true) stories about the Director of the Historical Society standing in the subzero depths of a winter night ordering the firefighters to “save the walls!” Everything else was lost, but the walls – ragged and tattered – were left standing. In 2001 those walls were incorporated into the museum. Designed by Meyer, Scherer & Rockcastle, the structure is an amazing blend of old and new. . . an awesome building with a rooftop deck that provides more views of the river!

Photo from the St. Anthony Falls Heritage Board

(We may need to come here in the evening too, as a July 8th concert features local blues stars Spider John Koerner and Tony Glover)

The area around the museum is part of the Saint Anthony Falls Historic District and the Minneapolis Riverfront District. (And about three other districts, trails, and/or neighborhood – apparently everyone wants to claim it these days.) There is a lot of history in this area, so maybe we should tour it via segway.

Photo by City of Lakes Urbanism

It is probably time now to start moving toward the heart of downtown.

Photo from the Minnesota Historical Society

I’m guessing though that Norman will be more interested in the new downtown library, designed by Cesar Pelli and opened to the public in May, 2006.

While downtown is filled with wonderful architecture, the Foshay Tower (now the W Minneapolis) is the classic. We’ll be there too early in the day for a drink at the ultra-swanky Prohibition bar (which occupies what was once Mr. Foshay’s office suite), but I’m hoping the museum and observation deck will be open (sketchy information available, but mostly likely from noon – 9 p.m. each day).

While there are lots of amazing building to visit – from the 1972 IDS Center to the 1890’s era Lumber Exchange and City Hall buildings, we probably really to take a lunch break.

Luckily, there are LOTS of great dinning options downtown. We probably could eat at the newly revived Forum although the review I saw indicated the food wasn’t equal to the setting. Bank Restaurant (located in the former lobby of the former Farmers & Mechanics Bank building) would be another option – I haven’t been here in a few years, but at that time the food was good and the atmosphere positively glamorous. Of course, Vincent is also an option – its lovely dining room makes a wonderful setting for some of the best food in the city. If we want a quick, classic Irish escape (Michele and I spent time together in Ireland a few years ago), we could always head over to the Local or to Brit’s Pub for fish and chips alongside the bowling green. (I’ve never actually been up to the bowling green, which must have good views of the city.) I REALLY want to take my friends to the Dakota where former neighbor and chief extraordinaire Jack Riebel does amazing things in the kitchen. . . but while it is a great space for jazz, it isn’t very interesting architecturally. Then there are all the newish places I haven’t gotten to yet. . . . Decisions, decisions.

I’m sure we’ll find something and, thus fortified, continue on. (Perhaps with a little break for shopping or at least a quick run through the original, once glamorous Dayton’s department store – now a boring Macy’s.)
We need to stop for a moment at Hardy Holzman Pfeiffer’s industrial style Orchestra Hall to take a (perhaps last) look at what I suspect was a pretty daring structure in 1974, with exposed and dramatically highlighted ventilation pipes.
So it’s not the Pompidou Center, (which might not be such a bad thing, as it is possible to take a concept too far), but it is a Minneapolis icon that is about to be transformed into a fashionable glittery glass box. It seems like the antitheses of the original concept of a building that connects to the common folk to show that classical music isn’t just for fancy rich folks. Times change.

There will be no concerts while my friends are in town, so we can spend our time loitering in Paul Friedberg’s lovely Peavy Plaza.

That is, assuming they finally have water running in the fountains. (It was dry when I was there in May.) While the renovation of the concert hall is not supposed to encroach on this wonderful space, it appears that other changes are in the works. I’ve never figured out why this space isn’t seen as the treasure it is.

Friedberg also designed (and recently updated) the Loring Greenway, a wonderful urban greenway that links the city to Loring Park (one of the city’s first parks, dating back to 1883).

The 1914 Basilica of St. Mary claims to be the first basilica built in America. It is a fascinating place, as much for it’s very modern day approach to the world as for it’s traditional building. (It’s back behind the cherry.)

Which brings us to Siah Armajani’s 379-foot Irene Hixon Whitney Bridge with John Ashbery’s evocative poem (commissioned for this work of art):

And now I cannot remember how I would
have had it. It is not a conduit (confluence?) but a place.
The place, of movement and an order.
The place of old order.
But the tail end of the movement is new.
Driving us to say what we are thinking.
It is so much like a beach after all, where you stand
and think of going no further.
And it is good when you get to no further.
It is like a reason that picks you up and
places you where you always wanted to be.
This far, it is fair to be crossing, to have crossed.
Then there is no promise in the other.
Here it is. Steel and air, a mottled presence,
small panacea
and lucky for us.
And then it got very cool.

And then we are at the sculpture garden, which is a great place to practice photography!

We can end our tour at the recently expanded Walker. I’m not a big fan of either the large Herzog & de Meuron addition (lots of pointless space) or the collection housed within, but the exhibit 1964 sounds intriguing.

Of course, it would take all day to actually do all these things, in which case, we can just sit and enjoy the building’s wonderful lighting. 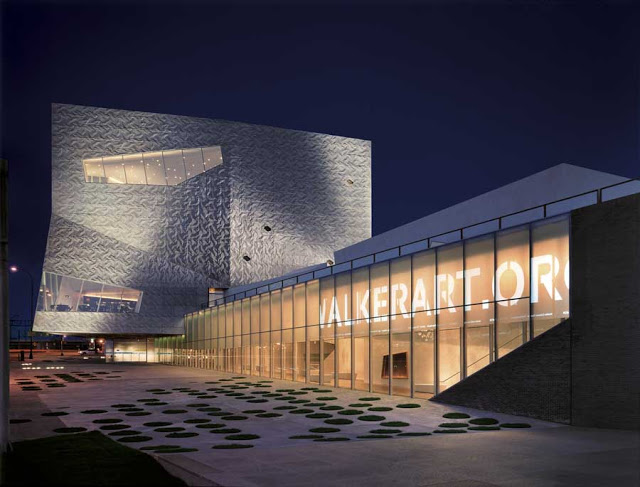