Art and architecture in the heart of Phoenix

Phoenix, Arizona, is not known for either its art or architecture, but it should be. There is plenty of both, as we discover on a jaunt into the city.

Today’s plans call for a morning visit to the Phoenix Art Museum in the city center.

The museum isn’t too far from the pretty neighborhood where my friends Andrea and Richard live, but I’m flabbergasted as we drive through the city. Where did this eye-catching mix of art and architecture come from? I don’t remember any of this from my last visit here!

While it’s true that I haven’t been in Phoenix for quite some time, I had never heard anything during those intervening years to make me suspect that downtown Phoenix was no longer the bleak, dirty, and slightly dangerous-feeling place I remember. Obviously I wasn’t paying attention. Bringing in a light rail line was just part of the city’s plan to remake the central city into a cheerful, vibrant, and welcoming urban place. 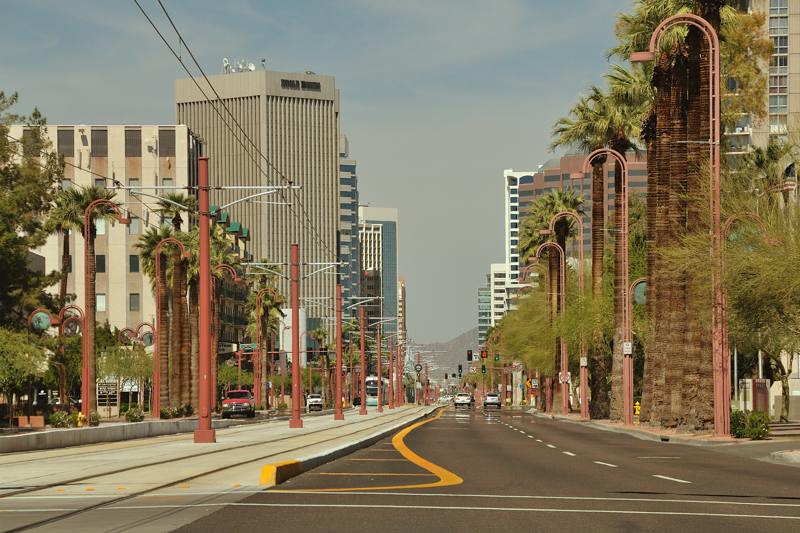 The art museum itself is part of this transformation. Like the rest of the city, the museum is (to me) surprisingly sophisticated, fun, and funky.

We spend most of our time enjoying the special exhibits, knowing that this show may move on before my friends have another chance to see them.

I’m not particularly interested in the Ernest Blumenschein show and probably would walk past without entering if Richard were not interested in it. Good thing he is. While Blumenschein is probably most well-known for his portrayals of the people of the Southwest, it is his landscapes that speak to me, their bold colors bringing the Southwest to life in a way that is both new and visually exciting. 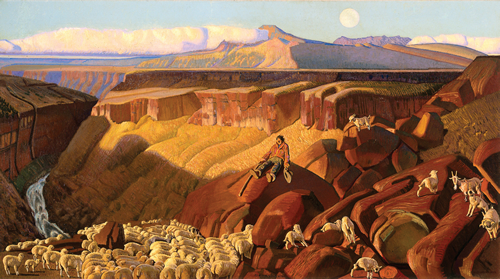 The museum has an intriguing collection of funky modern sculptural art and a couple of small, but lovely, textile exhibits. Despite these distractions, I know immediately that I have found my favorite exhibit when we step into the gallery that is home to Charting the Canyon, featuring the work of Mark Klett and Byron Wolfe.

Mark Klett and Byron Wolfe, 2007.One hundred and five years of photographs and seventeen million years of landscapes; Panorama from Yavapai Point on the Grand Canyon connecting photographs by Ansel Adams, Alvin Langdon Coburn, and the Detroit Publishing Company.

While the general technique used throughout this show is consistent – matching modern photos to historic images and then combining the two in some way – the wide variation in how that technique is employed is impressive. I’m amazed by both the technical expertise and the artistry involved in this: How in the world do they do this and what ever made them think to try it?!?

I leave with a head full of ideas.