A colleague has alerted me to the fact that there is a large chimney at Chapman Elementary School in Portland that hosts an extremely large colony of swifts. Apparently each evening the birds swirl around for awhile and then funnel, en mass, into the chimney. It sounds pretty dramatic.

It turns out that this is a seasonal event, as it is only at this time of year that these Vaux Swifts gather here in great numbers – up to 30 or 40,000 – before migrating south.

This evening there is a festival to celebrate the return of the swifts. There is a (loud) band and hundreds of folks sitting on the lawn behind the school (eating picnic food and drinking wine) or milling around visiting. This appears to be THE PLACE to be in the neighborhood.

There are also children everywhere, most attempting to slide down the hillside behind the school on flattened cardboard boxes. (Cardboard doesn’t slide very well on dead grass, but the kids seemed to enjoy it anyway.)

We find a spot at the top of the hill and sit down to wait.

Soon tiny spots begin to emerge from the clouds, the first of the swifts.

Perhaps they are confused by the music. They gather together in a large group, swirling about high above the school. More and more drop out of the clouds to join them, forming a large dark cloud, but then, instead of waiting for the rest, they funnel into the chimney until the sky is almost empty. 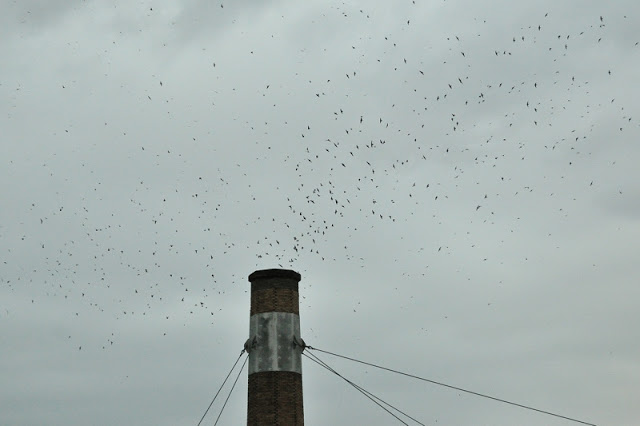 Then more birds begin to appear and another large swirling mass forms and funnels into the chimney. . . and then still more birds come.