Every year In the Heart of the Beast Puppet & Mask Theatre in Minneapolis puts on an elaborate May Day parade – true street theater.

Somehow we’d never gotten around to seeing it.

Are we racing toward collapse?

It isn’t until I look at the website the morning of the parade that I really realize what a big deal this parade really is. (I’ve never heard of anyone story boarding a parade before.) From the website I learn that the parade is using the collapse of the bridge last summer as a place to begin mulling over the direction our consumerism and war mongering is leading us as a nation and world. Is it leading to depletion and collapse or are we creating bridges and structures that will lead us to a sustainable and harmonious future?

Wow! A parade with infrastructure as its unifying theme. Is this a great city or what?!

We end up waiting quite awhile for the parade to actually start. (We lefty liberals aren’t really known for our punctuality, so this isn’t really a surprise.), The people watching is great though, so the wait doesn’t seem too endless. 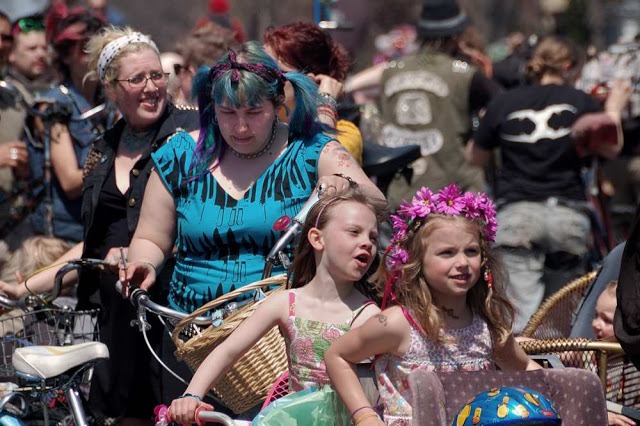 The bike contingents lead the way, so when they arrive in full-force I know the rest of the show can’t be far behind.

Sure enough, I soon see a giant critter grabbing wildly at a large, swinging carrot. 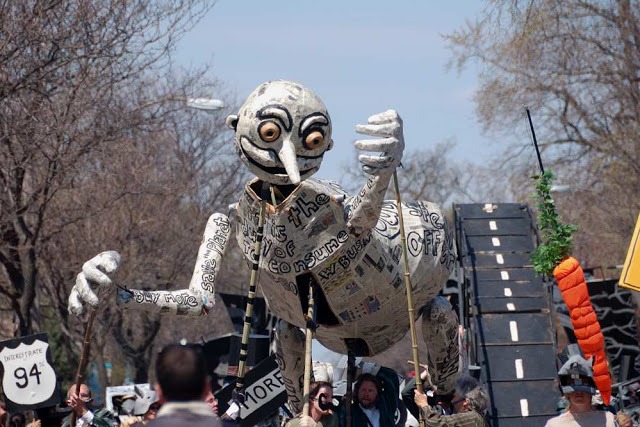 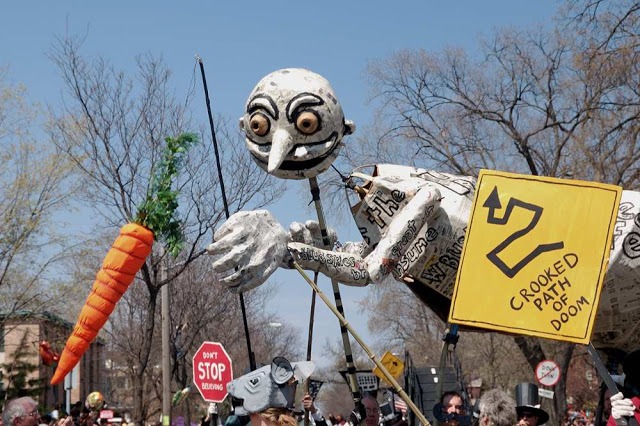 This is accompanied by collapsed infrastructure, the machinery of war, and a rather exuberant automobile-powered rat race that clearly isn’t leading to anything good.

The storyboards simply call all of this Racing Towards Collapse.

Then the over-sized mourners arrive, grieving over the shrouded tree of life. 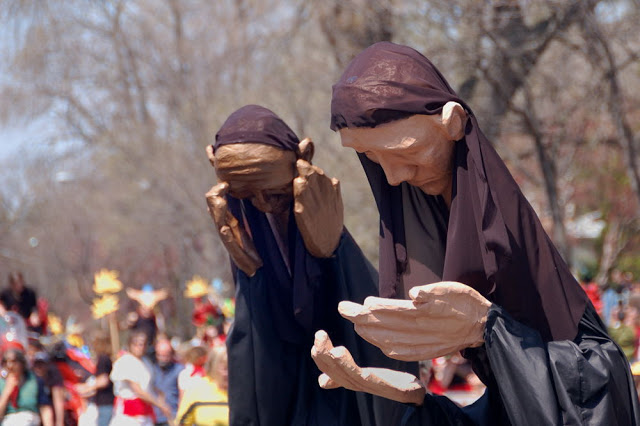 But they are quickly followed by A Change of Heart as people from around the world come together with hope for the future. 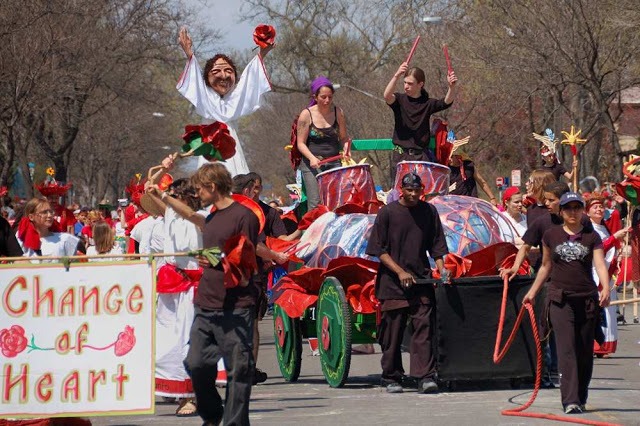 And they are followed by what appears to be the clean-up crew.

This leads to Now, when the streets are alive with creative solutions to the problems of the past.

I’m in need of a few creative solutions of my own, as I was stupid and forgot to bring an extra card for my camera.

Appropriately, I run out of digital space right as the Think Ahead portion of the parade comes by! 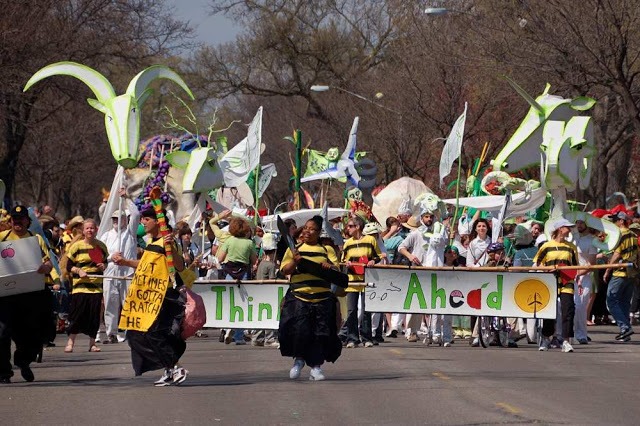 The parade continues on, with brilliantly colored horses and other critters helping push the world toward a better, more humane and more sustainable future and bringing us to the interconnected world of We Are.

It’s quite a show and I look forward to future parades. . . maybe I’ll even remember to bring an extra digital card so I can actually photograph the arrival of whatever perfect new world this creative group conjures up next year!

There used to be a site online (not at Heart of the Beast’s site) that included the story board for the 2008 parade. At the time, the parade was a question: were we simply Racing Toward Collapse, or will we turn things around and make the changes needed for a healthy, happy, safe, and sustainable future for all?

That website — and the storyboards — appear to be gone.

All that remains today are a few dedication paragraphs on the Heart of the Beast website with the title A New Bridge: Infrastructure for the Future Beings.

At the time of the 2008 parade, it had been less than a year since the collapse of the I-35 highway bridge in Minneapolis. It would still be almost six months before the new bridge opened to great fanfare. The pain was still raw. So was the awareness that our civic infrastructure was collapsing around us both literally and figuratively.

While the May Day parade always embraces hope for the future, it’s never been afraid to take a serious look at reality either. In May 2008 a lot of us were wondering if the bridge collapse was sign of what’s to come or a wake-up call that would lead to a new future. The parade was not a celebration of the shiny future that awaited us, but an expression of sorrow, fear, and hope for a better tomorrow. Lots of hope.

Maybe the title for the parade was A New Bridge. But my memory of the day and the storyboards is of a much more complicated and far less optimistic view of where we were as a society.

And of course, ten years later, it seems as if we are Racing to Collapse even faster.

As Heart of the Beast always reminds us, we can change the future. But we have to act.