Although my neighbor’s ash tree has turned a brilliant shade of yellow, from my perch here on the front porch it is very hard to believe that it is fall. It sure doesn’t feel like fall. . .

But fall IS arriving, even here, and I heard on the radio that this should be the peak weekend for fall colors up along the North Shore. It’s hard to believe that it will be even more beautiful up there this weekend than it was two weeks ago — so perhaps they are wrong. You can decide for yourself.

But first we head to Grand Rapids, where my aunt and uncle have told us the leaves are perfect!

We are a little late getting going, mostly because I hadn’t even begun packing in advance. (It was a busy week.) I’m ok with that as we start off, but get increasingly frustrated as the hours roll by. It is a beautiful day and I don’t want to spend it sitting in a car!

At last we arrive at my aunt and uncle’s place outside Grand Rapids.

I’ve always loved coming here – both because they are great people and because they live in a wonderful spot. After a number of years of making pretty regular visits, now it has been a few years since we were last here. That is too long.

There is still time for a walk in the woods, and so we are off, hiking under a glittering canopy of red, gold, and green, then turning to follow the field back to the house. 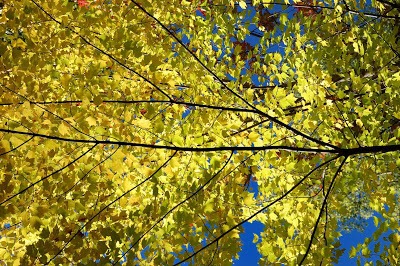 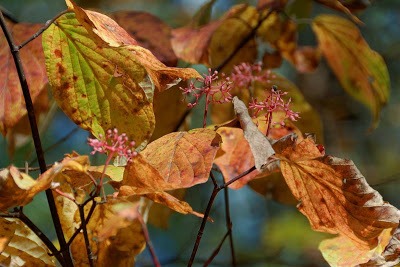 This is fall at its best!

Out amidst the trees in northern Minnesota (September 23)

Perhaps we should be in church today, but it is easy to convince Ken and Hazel to take us out for another hike instead.

But first, a scenic drive along quiet back roads. The surrounding woods just glow – this is such a beautiful time to be here!

At Trout Lake we get out and hike a short distance through the woods. 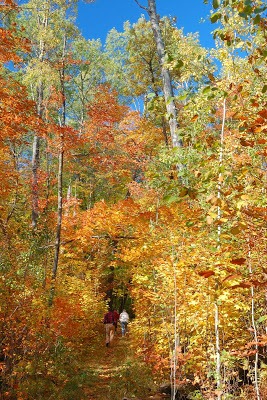 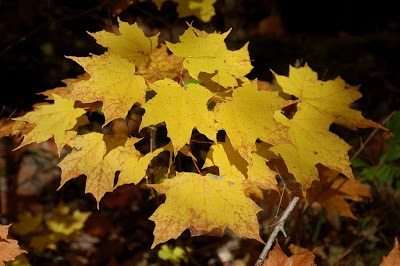 It is so lovely.

Next we make a quick stop at Spider Lake (where someone apparently has issues with the fishing regulations). This is a great fishing lake, but for us today it is just a short scenic stop along the way. 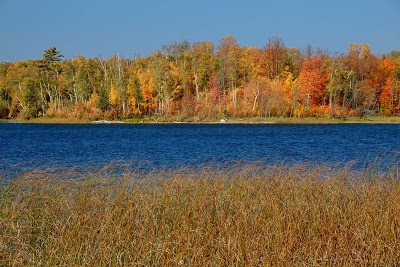 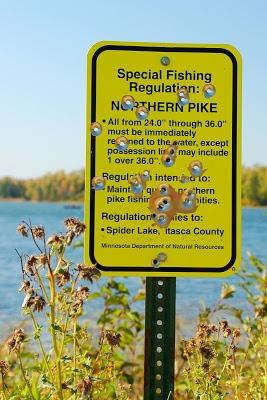 It is past lunchtime now, so we stop at the (very busy) café in Marcell (which seems to go by a variety of names). 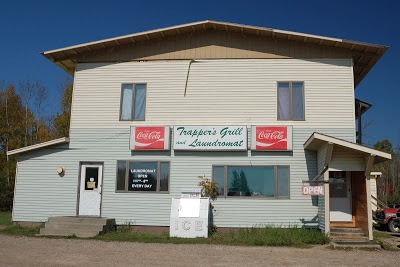 As forewarned by the overworked waitress, lunch takes quite some time to arrive, but the food is good and it’s nice to have the time to sit and talk.

And then it is off for one more hike. This time we stop at a spot along the Laurentian Divide, which marks the point where water on one side flows north into Canada and Hudson Bay while on the other it flows south to the Mississippi and the Gulf of Mexico. Of course, on this day, it is just seems like a beautiful spot for a walk through the woods. 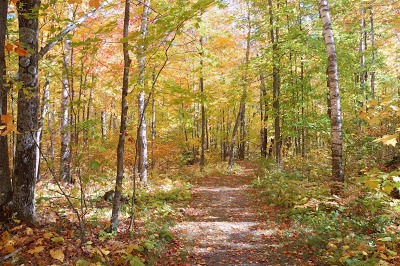 Now, sadly, Lane and I must say good-bye and be on our way.

Ah, it is so good to be in Duluth, Minnesota. I love this city, with it’s weird mix of heavy industry and tourist kitsch – all embracing the lake. As both a major tourist town and a hardworking international port, Duluth has a gritty integrity that a lot of tourist places have lost. It’s just a really interesting place to be – I’d live here if I thought I could handle the winters.

We check into our waterfront hotel and then head for Canal Park. 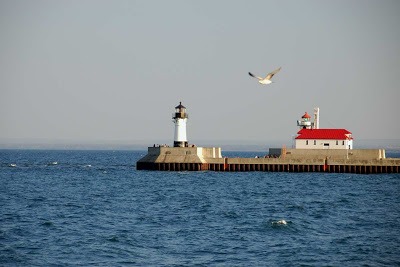 Since the lift bridge is already up, we hurry to see who is leaving the inner harbor.

We watch the John J. Boland as it quickly heads out into the open water. It always amazes me how fast these huge ships move through here. 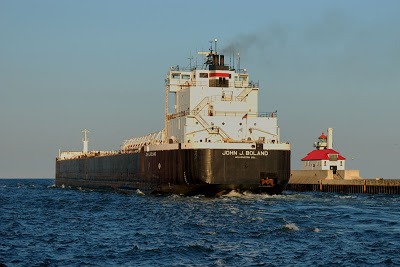 A short walk allows some time to take in the harbor scene and then watch as the Inviken makes its way into the harbor. 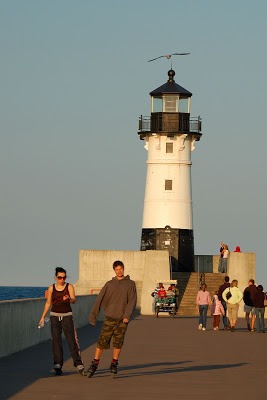 Even though the sun is shining pretty early, we sleep in a bit . . . probably longer than we should, but through the window I can see the lake is still shrouded in haze.

However, just a short time later we are walking through the city under a sun that is already hot and bright in the morning sky. 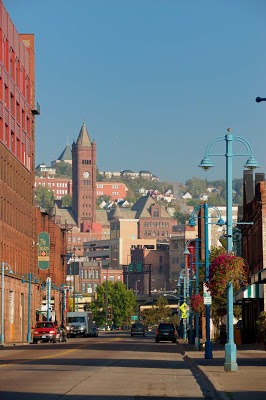 It is going to be a great day.

Along the North Shore

Gooseberry Falls
Along the Way

A Scenic Drive (September 25)
Naniboujou
Along the Brule

Along the Gunflint Trail

We stop by the lodge on our way back to the cabin. There don’t seem to be any geologists in the bar, but we had put a bottle of champagne on ice before leaving on our hike, so the geologists can have the bar. (Today is our wedding anniversary and we came prepared.) As I anticipated, the restaurant manager loans us a couple of champagne glasses to take back to our cabin.

It is dusk now. Outside the window the birds are making their final, nervous, forays to the feeder as the darkness falls. Inside, Lane pours the champagne, lights a match to the logs waiting in the fireplace and we settle in to relax until dinner.

Life in the northwoods at its very best.

Back to the North Shore and Duluth

At the Rainbow’s End in Duluth

It is about dinner time and Lane would like to eat something, so I tell him to keep a watch out for the Scenic Café. We miss it and he doesn’t seem that eager to eat there, so I keep going – I’m ambivalent about stopping for dinner anyhow. However, as we drive through Duluth it occurs to me that this would be a good time to (once again) try to get into the Boathouse in Superior. (It was closed when we stopped there for dinner on Sunday). It is a bit of a detour, but not too far out of our way.

Of course, once we get to the restaurant, they refuse to seat anyone who doesn’t already have a reservation. They don’t seem interested in my pleading and I vow never to eat there again. (A vow I probably won’t keep since there really aren’t that many fabulous restaurants in the Duluth-Superior area.)

Back on the road, I decide it is time to just get out of here and go home, but as we near the exit for the Duluth rest area, Lane reminds me that I wanted to stop to check out the view.

I can see by the rear view mirror that the light on the harbor looks good, so I exit.

When we stop, I can see the end of a rainbow far to the north. Sweet! 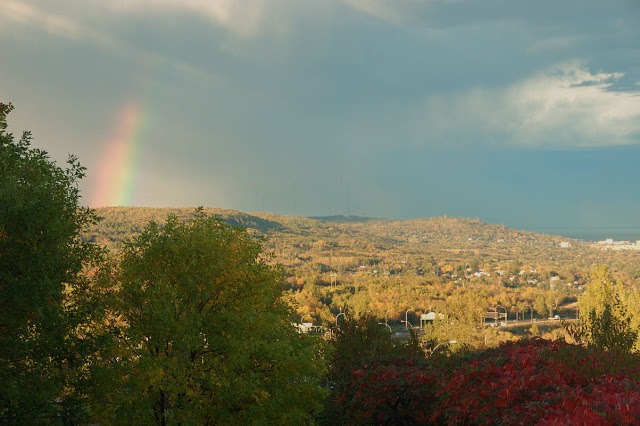