Our first stop is the 14th century Sultan Hassan Mosque, which sits just below the Citadel.

Even though we are not required to wear a headscarf here, it seems like the respectful to do.

I’m giving my scarf a final twist as I walk past the guards stationed near the mosque’s entrance. As I pass, I hear one ask the other “Moslem?” in a perplexed tone. At least I’ve managed to confuse folks a little. That seems like a good thing.

Actually, being so totally western, veils and even headscarves have always made me a bit queasy. Sure women should have the right to wear a scarf or veil if she chooses, but she shouldn’t have to wear one . . . and why would anyone choose to do so?

The Sultan Hassan Mosque was built in during the years 1356-1363, but never completely finished or decorated. It is large and a bit austere. The sheer walls bear little ornamentation and, in this city where mosques often sprout a multitude of elaborate minarets, there are now only two here.

We enter through a dramatically over-sized portico. 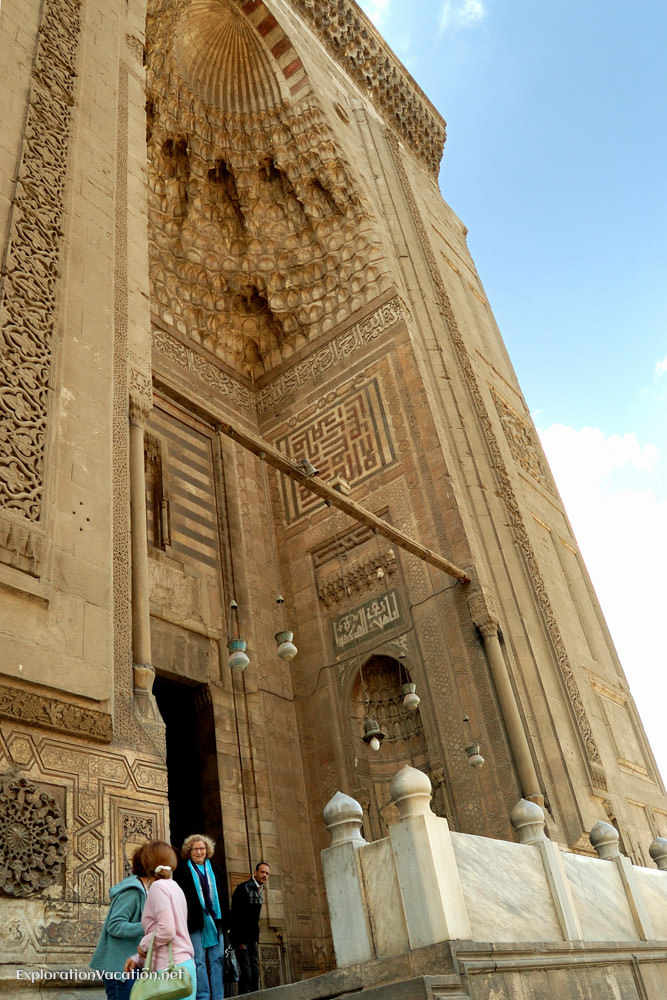 Inside I find myself standing in a vestibule decorated with small panels of detailed carving, simple stained glass windows, and carefully set stone arches that reach up to the dark dome high above.

From this room we walk through a dark vaulted alley that takes us out into a bright courtyard and the soaring sanctuary beyond.

In the sanctuary we gather to one side, sitting on the carpet of prayer mats that cover the stone floor.

From where I sit, I can study the space around me:

the doors leading to the Sunni madrasas (legal schools), 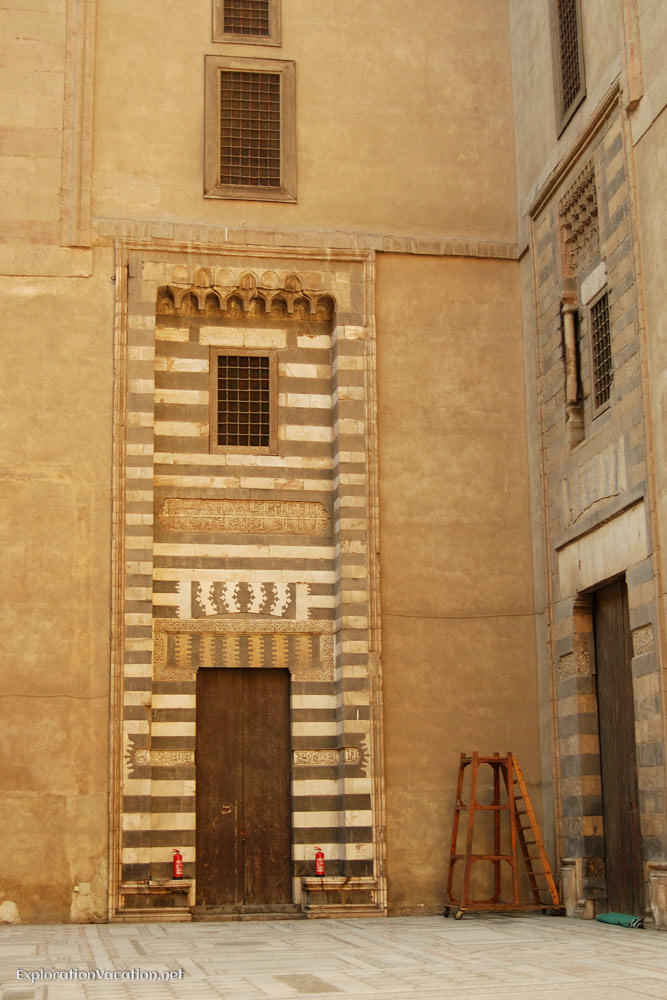 the mihrab (the niche that marks the direction of Mecca), and the minbar (pulpit).

It is a beautiful place.

Romani provides information about this structure and about Islam, giving us a brief overview of Islamic belief in general and the five pillars of Islam in particular. 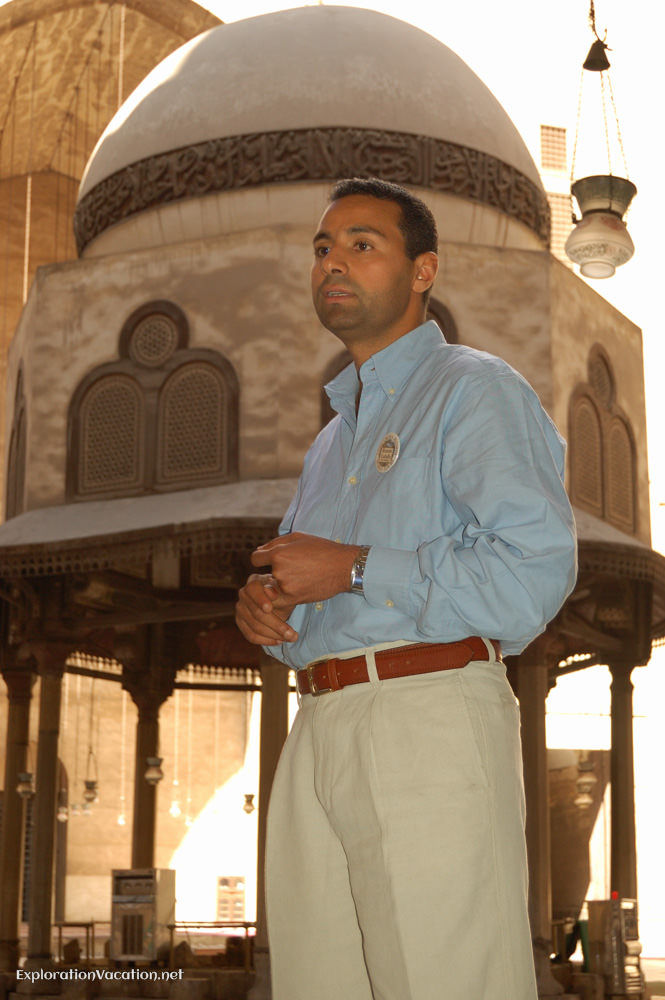 Then he turns the floor over to Larry.

I shift my position on the cold damp carpet, partly out of discomfort, but mostly in anticipation.

He begins with a discussion of the five pillars of Islam, relating them to things we have seen or heard here and to our own faith and lives back home. I’m struck by the way he first lays out a few facts, carefully pauses, and then begins his analysis with the words “I think this means. . . ” – as if encouraging us to decide for ourselves whether he is right and what we think. 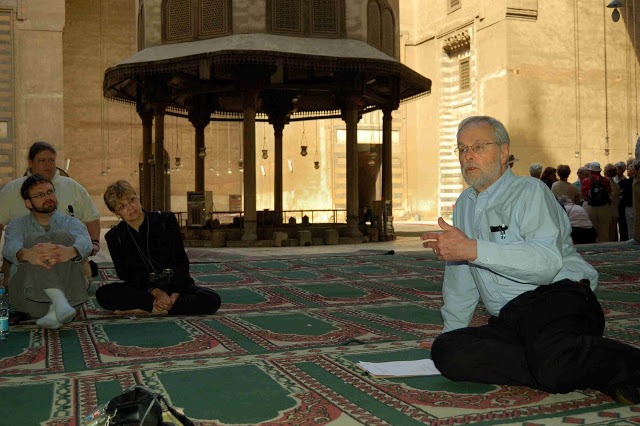 I wish I had spent more time reading and thinking before coming here, my mind feels so slow and sluggish!

As I listen, I absently watch a medallion set high in the wall, the snaking lines of the prayer mats, a worshiper entering the space to pray . . . while at the same time the cadence of Larry’s voice takes me back in time to college. When a phrase or concept requires my complete attention, I turn back to Larry seated on the floor in front of me and am for a moment displaced in both time and space, expecting to see the professor I knew twenty years ago, surprised to be here, now.

Despite the warm sunshine that bathes the open courtyard, the mosque is cool and damp, the prayer mat beneath me cold and clammy. Yet, as I sit in this strange and beautiful place, listening as Larry discusses what he knows and thinks, there is not another place I would rather be.

This is precisely why I have come here.

Larry is interrupted by the call to prayer. We wait and watch. Whispered answers provided for our nearly silent questions.

Once the noon prayer has finished, we move inside a lovely, high-domed room referred to as the mausoleum of Sultan Hassan, although he is not buried here. 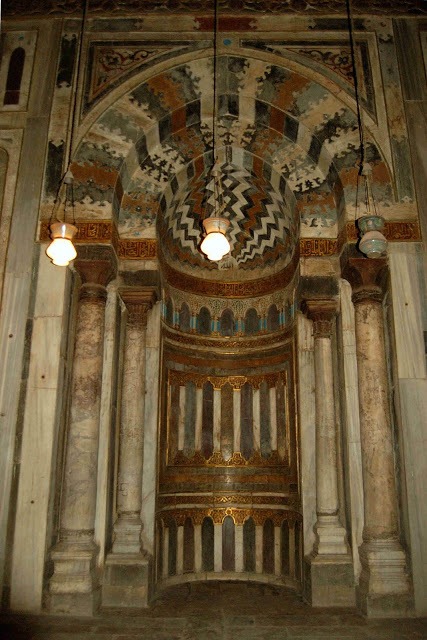 We are soon joined by the imam, who provides a little information on Islam and on this space and then gives a lovely little demonstration of the acoustics here. 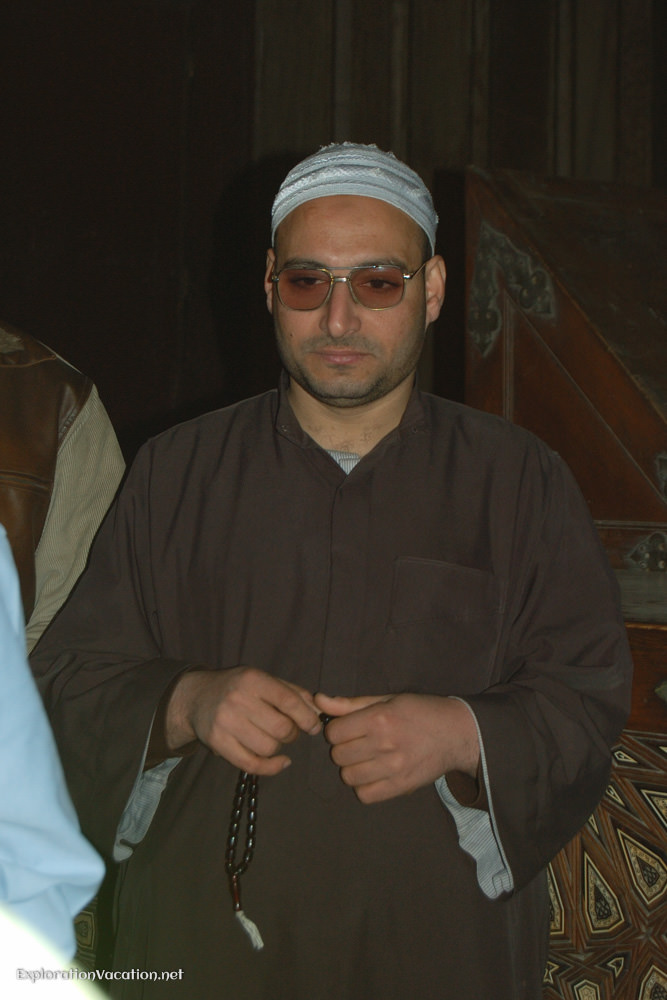 As we turn to leave, someone accompanying the imam laughs and asks “Is he not like Frank Sinatra?” Perhaps, but the additional suggestion that a tip is in order destroys the moment.

Back outside in the warm sun, the mosque’s minarets are accompanied in the sky by those of the neighboring Al-Rifa Mosque.

Down the street, the Citadel floats serenely in the distance. 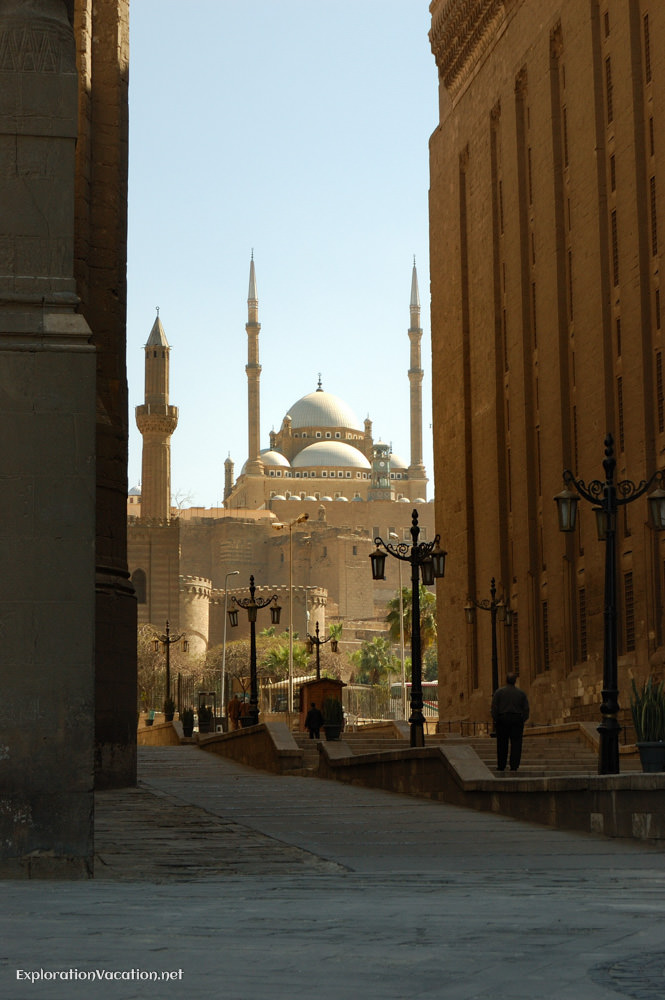