The route to Saqqara takes us out of Cairo; past the substantial, but rather squalid-looking squatter cities sprouting along the city’s green edge; and then into a lush agricultural area watered by the Nile via canals. It is seems like we have also traveled backward in time to arrive in this place where people work the fields by hand and the donkey carts loaded with goods far outnumber the trucks.

Soon we see the pyramids. Huge figures floating in the distance like an over-sized movie backdrop.

Can that be real?

But we have to wait to find out, because Romani is saving them for this afternoon. Darn.

As we enter Saqqara (Sakkara or Saccara), ruins from a variety of eras are visible off to the side of the road. 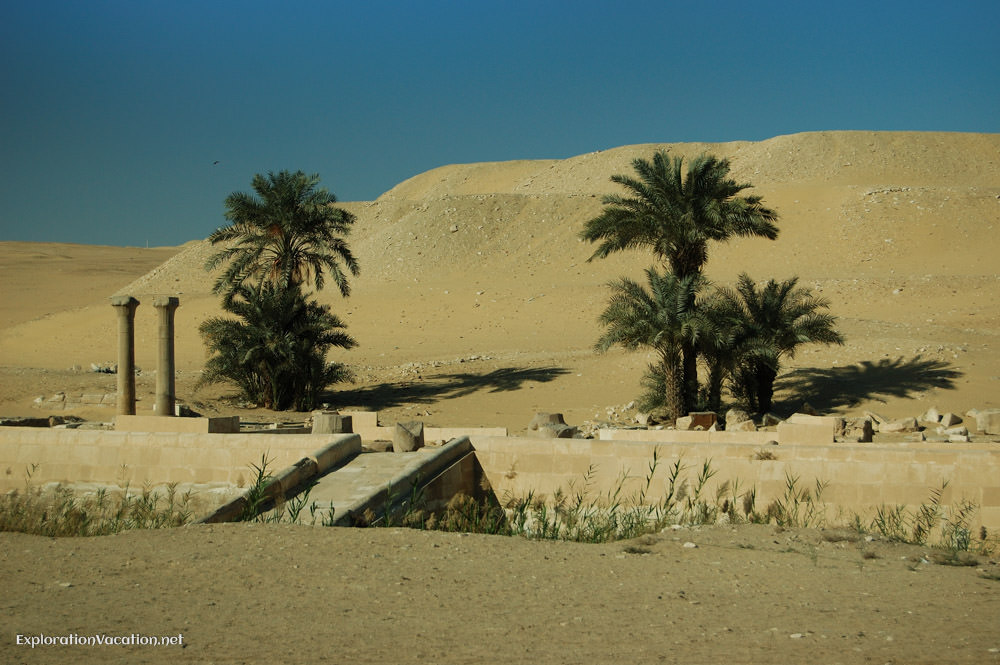 It looks like a set from an Indian Jones movie.

One of these rather unremarkable piles of rock is actually the remains of the pyramid of the ruler Userkaf.

Saqqara has some of the earliest tombs in Egypt, the largest and most important of these being the step pyramid of Djoser. 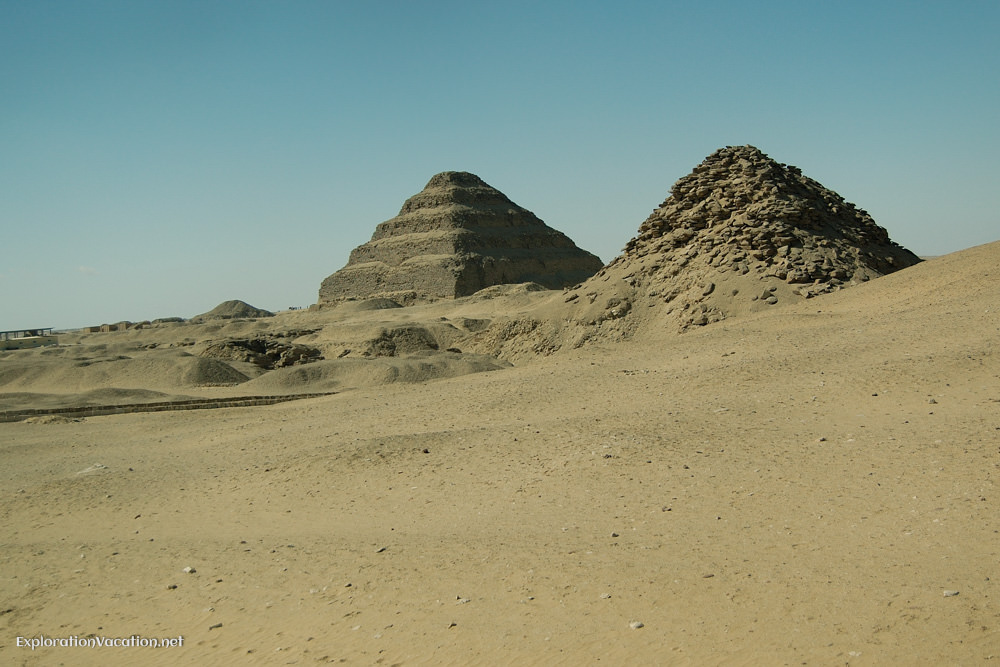 This pyramid – the first of its type and an architectural breakthrough — was constructed under the direction of Imhotep in the 27th century BC. It is the oldest monumental stone structure in the world. Before this time royalty and other leaders were entombed in mastabas — low, flat, mud brick structures built over the underground burial chamber. Although Djoser’s actual burial chamber is also located below ground, Imhotep essentially stacked six increasingly smaller mastabas atop one another to create a monumental above ground tomb for Djoser – although even this must not have been grand enough, as the original structure was expanded several times before being completed.

This pyramid sat within an enclosed yard with a temple and other funerary structures, all enclosed by a (now partially restored) wall.

We first gather outside this wall so Romani can explain the site to us with the aid of sketches in the sand. 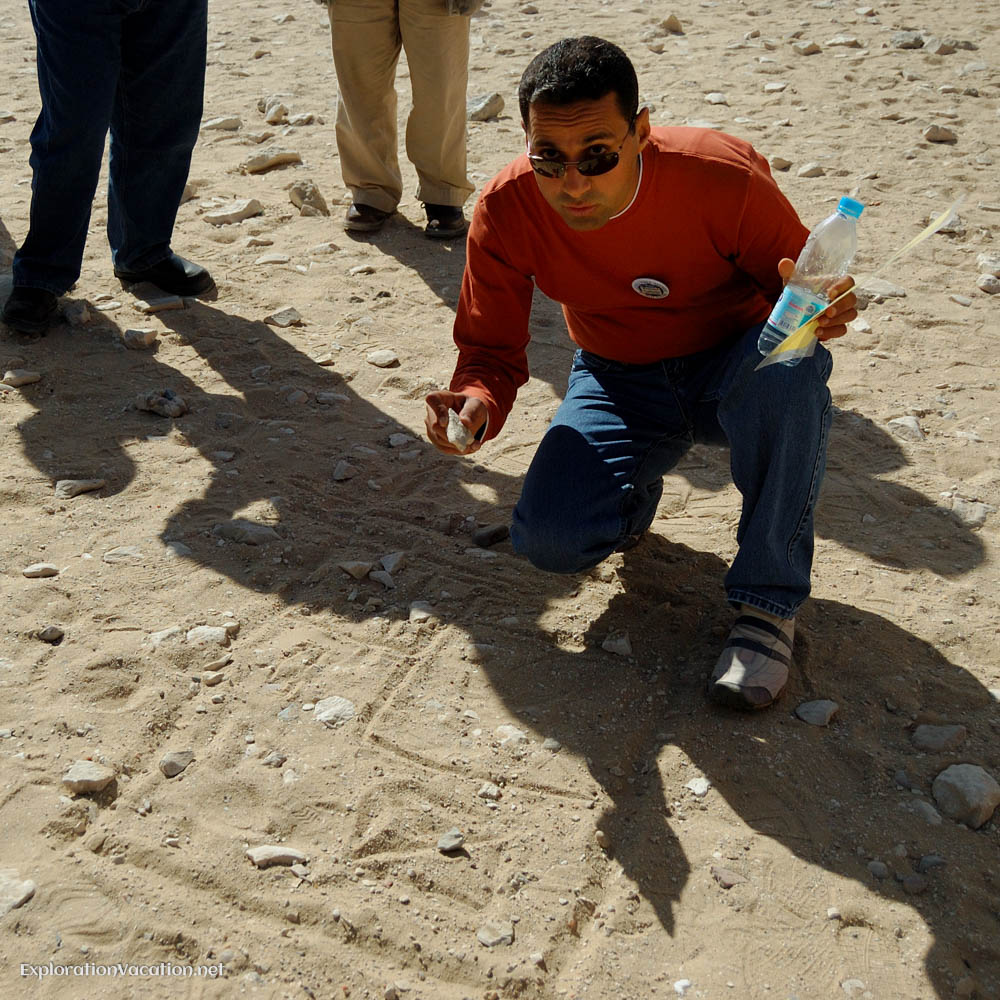 We pass through an opening in the wall, stopping immediately to admire architectural details such as the carved false doors carefully hung on carved false hinges. 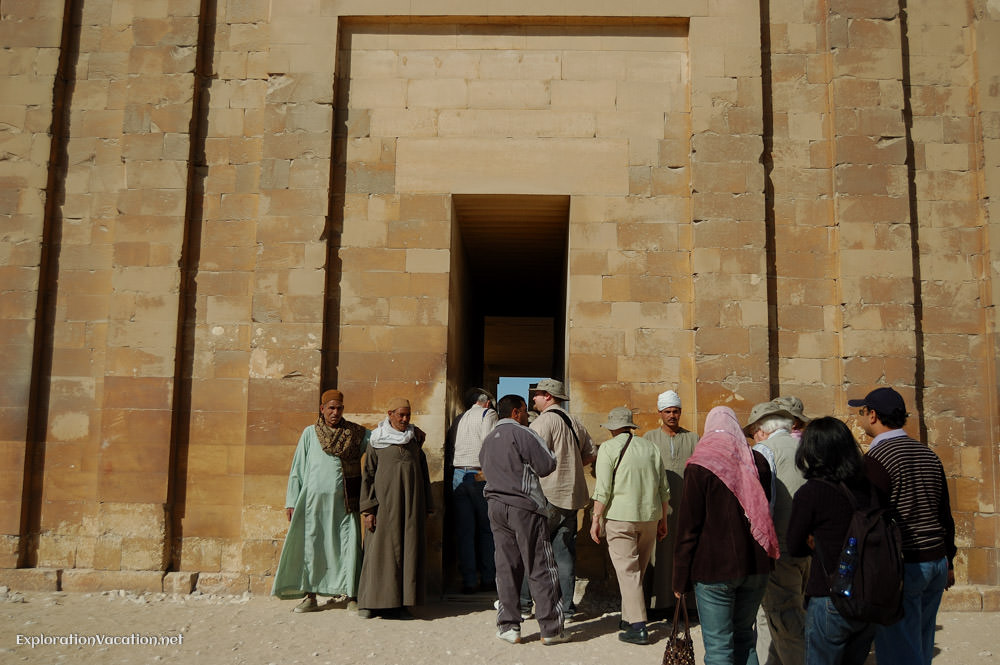 We walk through the rebuilt remains of the colonnaded temple with its elegantly fluted “pillars.” Although they appear to float freely, these pillars are actually tied to the walls for support.

Their elegant carved sides duplicate in stone the bundled reeds that would have stood in a traditional mud brick temple. 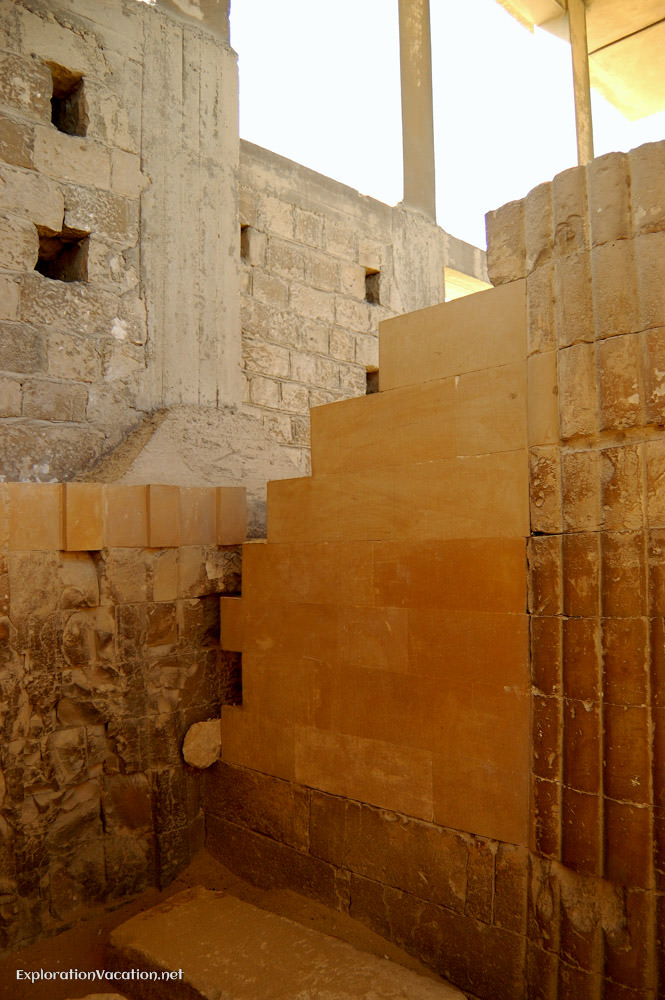 Walking straight out of the temple and up the stairs (steering clear of the incessant vendors with their books, postcards, and armloads of necklaces), you would find yourself at the top of the wall. From here you can see the pyramids of Dahshur in the distance, the bend in the walls of one clearly visible. In a place where the monuments often seem super-sized and inhuman, this ancient example of a plan that probably wasn’t executed quite as originally conceived seems very, very human.

While these distant proto-pyramids are alluring, Djoser ‘s pyramid beckons. 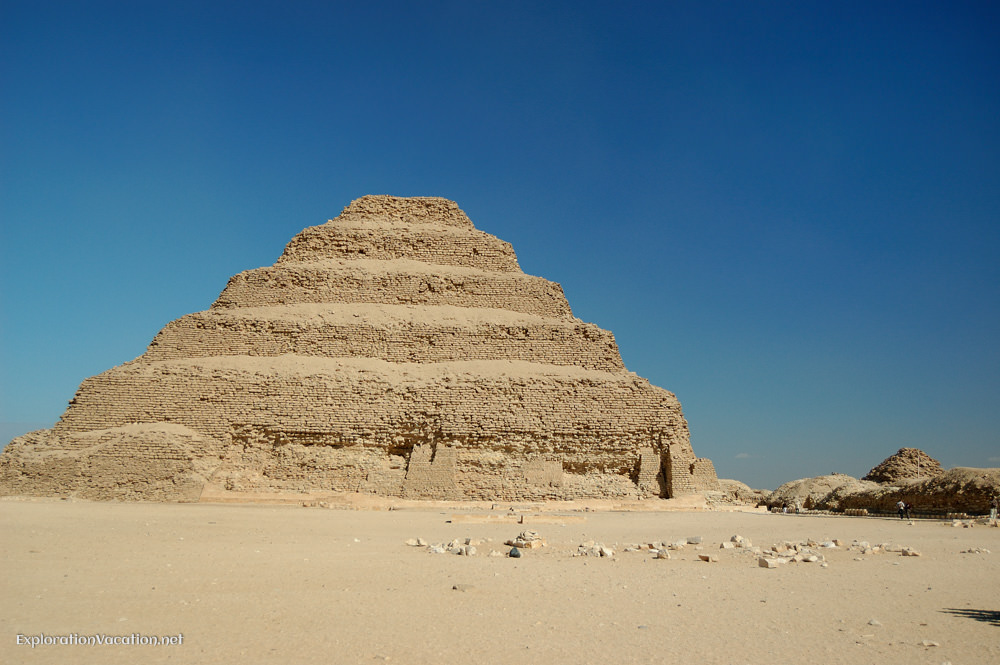 (This appears to be the mandatory group photo spot for tours!)

The original outer stone casing of Djoser’s would have gleamed in the sunlight. Of course, these finely finished stones have long since been “recycled” into other structures. . . . what we see now are the pyramid’s long-exposed base building blocks.

You cannot enter this pyramid and only a small funerary chamber could ever be entered.

The rest of the funerary structures lining this end of the courtyard were designed solely for symbolic purposes and were never functional. 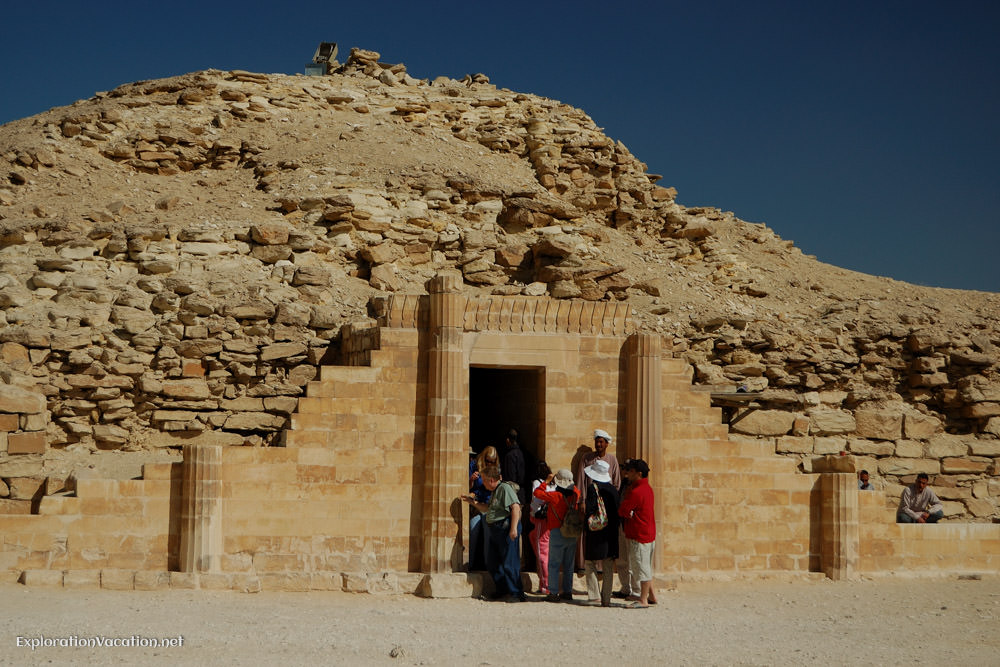 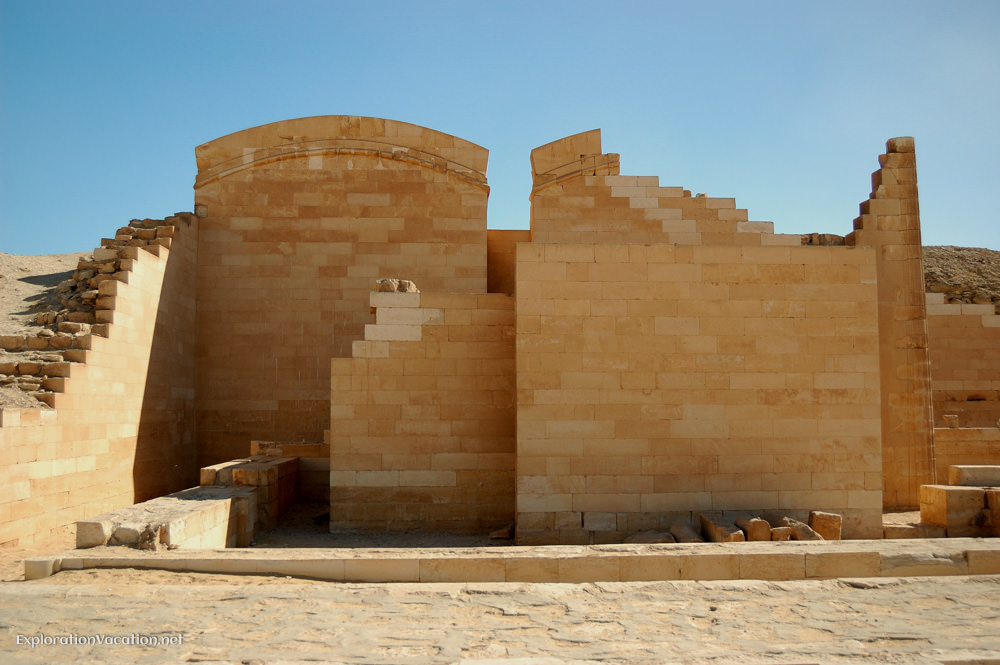 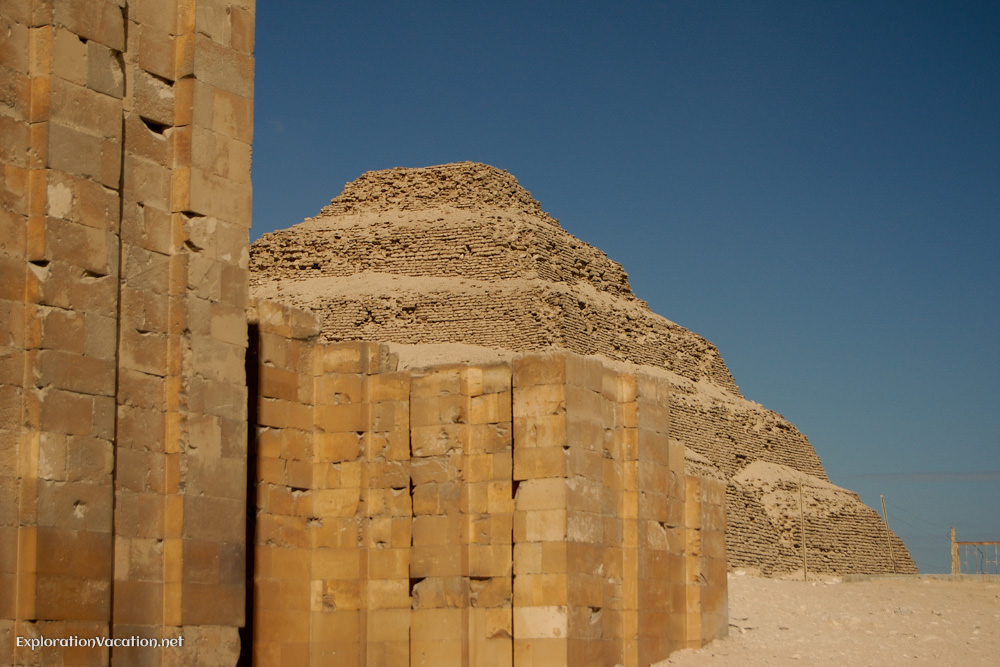 Near Djoser’s complex sits the crumbled remains of the pyramid of the (later) ruler Teti, along with several mastabas.

We first stop at the tomb of Teti, but the entry via a narrow tunnel (most easily descended backwards according to Romani) scares me off. I get claustrophobic just thinking about it.

Instead I check the merchandise displayed immediately outside the tomb.

A short walk away is the mestaba of Mereruka, who held many exalted civil titles, but who was probably also prominent because he was Teti’s son-in-law.

The inside of this large (30 room) tomb is beautifully carved and decorated – the images so crisp and fresh they look as though they were completed just last week. This tomb is famous for its depictions of everyday life and I find the images here touch me in a way no others have.

Although incredibly beautiful, the highly stylized decorations in other tombs felt static and impersonal. Here the same artistic conventions radiate love, warmth, and humor. The touted images of daily life are real and often FUNNY, with exuberant hippos snapping at hunters, errant pigs escaping slaughter, delicate baskets bearing prickly porcupines, and extravagant parties with excessive drinking. The builders of this tomb not only loved life, but saw the humor in it.

Other images are completely unlike any others I have seen because they are sweet and loving, showing people holding hands, or with a wife’s hand on her husband’s arm or (my absolute favorite) the traditional tiny image of the wife standing next to the huge image of her husband, but with her arm draped lovingly around his calf. These warm, even romantic, images make these ancient people heartbreakingly real.

Of course, all of this is carved in incredible detail, from the delicate feathers of the birds to the stalks of swaying marsh grass, the tightly woven baskets, carefully plaited wigs, or intricate beaded collars.

I wish I could spend the rest of the day in here.