After breakfast, depart Chiang Mai and drive through mountains, valleys and the lush landscape of northern Thailand to Mae Chan, with its Yao and Akha hill tribes. Continue to Mae Sai, the northernmost point of Thailand, separated from the Burmese border town of Thakhilek by a small river also called Mae Sai. Take a stroll through the local market where you’ll find jade and other Burmese jewelry and handicrafts, then continue to Chiang Saen, a small town on the bank of the Mekong River, on the border with Laos.

We appear to have a very busy day ahead.

Leaving Chiang Mai I have another opportunity to observe rush hour here as we cross the Ping River and head out of town.

While there are relatively few cars and trucks on the streets, there are large numbers of scooters and tuk tuks. I especially like watching the traffic back-ups that occur at each stop light: As the cars and trucks wait in line for the light to change, the scooters carefully work their way between and around the larger vehicles until they are massed together at the front of the pack. Once the light changes, the whole pack moves forward. At the next light the scooters will again work their way up to the head of the line. 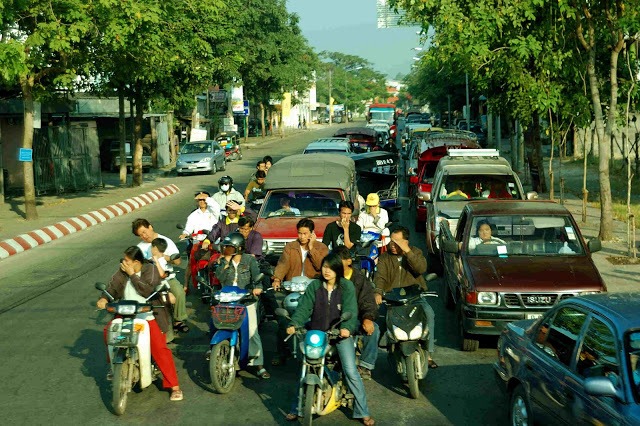 I also like the street signs here. On major thoroughfares they are elaborate creations featuring a temple with a large golden chedi and intricate umbrella – although most of the umbrellas seem to have broken off over time. 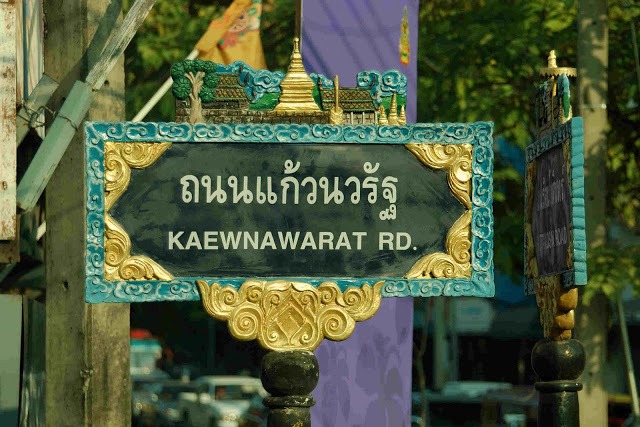 We pass a variety of businesses as we travel through town, but perhaps the most picturesque and uniquely Thai are those offering spirit houses for sale.

Outside the city, we drive through a variety of landscapes. All are lush and green. It is a beautiful drive. All along the way we pass interesting little towns and many beautiful sparkling wats – most of which are obscured by trees and power lines and, thus, impossible to photograph from the moving bus.

The love of beauty seen in the gorgeously detailed temples is also evident in many other aspects of life – such as the golden markings on the tank trucks we pass along the way! 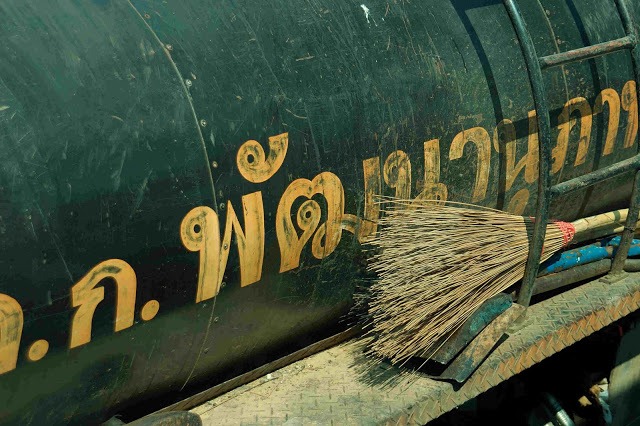 It is a long morning, but Chris fills much of the time with historical, political, and cultural information as we travel. Sometimes she plays music and, as always, she has purchased a few local treats for us to try.

She also has purchased armloads of lotus buds. 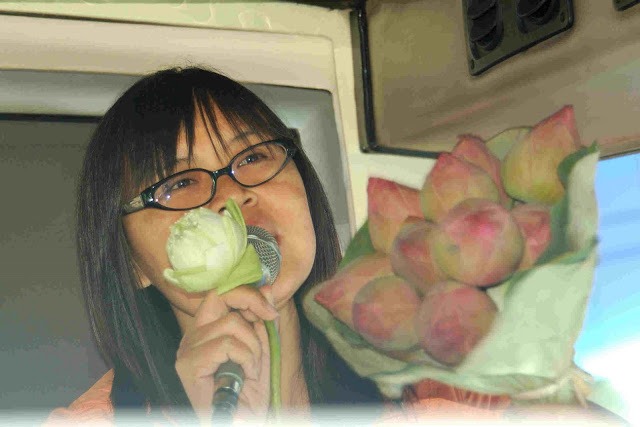 She distributes the pink and white buds to all of us and then gives us a lesson in Thai flower folding. This is a common activity for Thai Buddhists, as buds are often embellished this way before being offered at the temple. It is pretty simple, but I struggle to keep my blossom looking balanced while most of the rest of the group whizzes through the lesson. Still, it is a lot of fun and the folded lotus blossoms are beautiful.