Choeun tells us that this is known as the “Temple of Women” because it was thought that only women could create a temple so delicate and beautiful. However, he is quick to clarify that it was not actually built by women. . . .

Banteay Srei is not a royal temple.

It is instead a minor temple built by a royal counselor in the 10th century.

It is a lovely isolated place that escaped discovery by French archaeologists until 1914. It still feels a little undiscovered.

We reach the main temple by moving through a variety of structures that surround it, passing over what was once a causeway.

Moving off to the side, we have a lovely view of the temple reflected in a small pond.

Entering the inner temple is like walking into an elaborate jewelry box filled with ever more delicate boxes. At every step, the view before us changes. 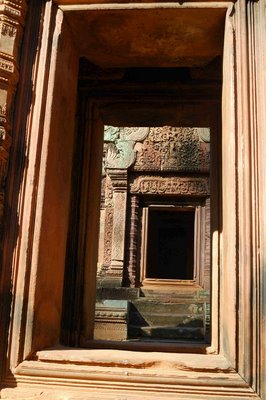 At last we are in the inner temple itself, with its small, elaborately carved structures.

While the temple complex has an air of benign neglect, there is actually maintenance work underway. A small team of female workers sweeps the grounds, while their male counterparts work on the structures themselves. Above our heads, each roof seems to bear a single young man who patiently works his way across the steep slope in search of vegetation that has taken root in the mossy surface.

Each tower carries miniature replicas of the temple’s other structures.

Many of the carvings relate tales about the Hindu gods, the details fresh and crisp in the fine-grained pink sandstone.

It is a beautiful place.