Upon landing at Suarez Point on Espanola Island, learn about lava terrain while crossing inactive lava fields. Aside from the sea lion colonies, this is a great site for bird watching. You may encounter a large colony of Waved Albatross, and might also spot marine iguanas, lava lizards and the colorful Sally Light Foot Crabs. Later, visit the famous blowhole, where water shoots high into the air. 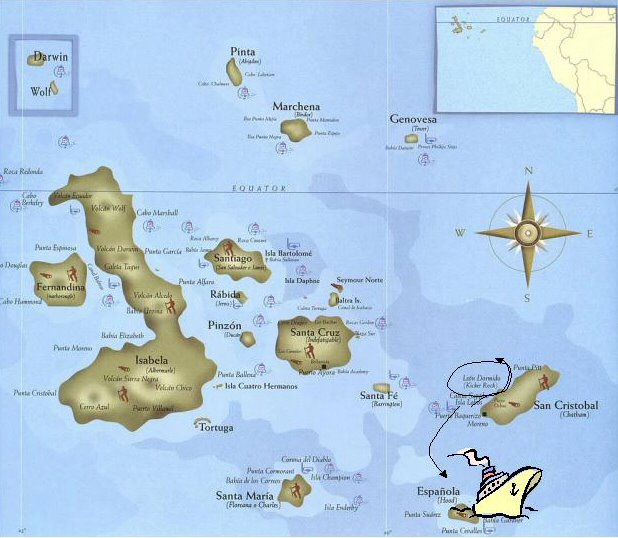 Suarez Point is a rocky outcrop with a long dock and a hard sand beach. The jagged black rock is splattered with brilliant-colored Sally lightfoot crabs.

The beach is similarly littered with sea lions of all sizes and ages, including new born babies and youngsters chasing after their mothers. 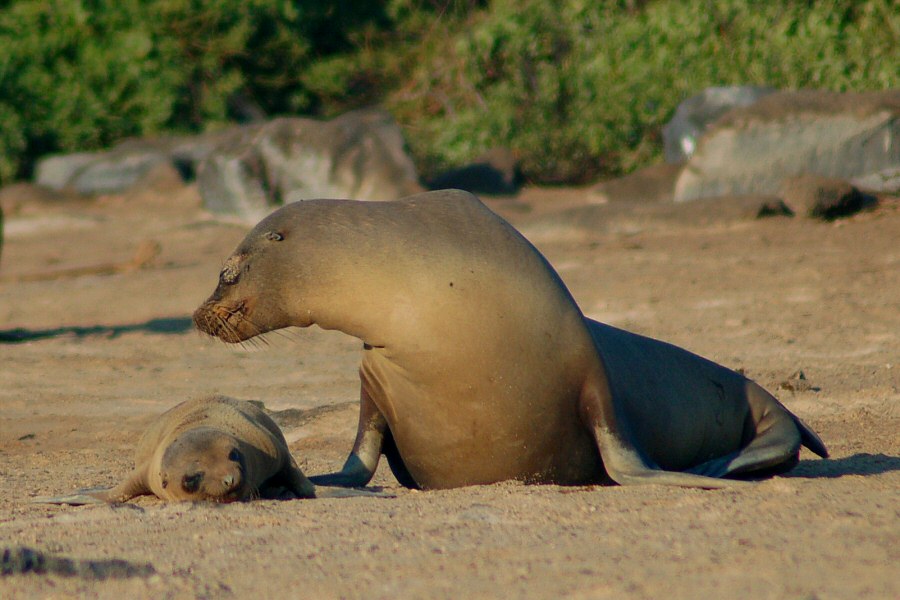 The sea lions seem no more concerned about our approach than were the crabs. They form an obstacle course underfoot everywhere and make no effort to move away from us. It is we who must watch out and stay out of their way.

When taking photos of one, I nearly trip over another that lies sprawled on the sand behind me. 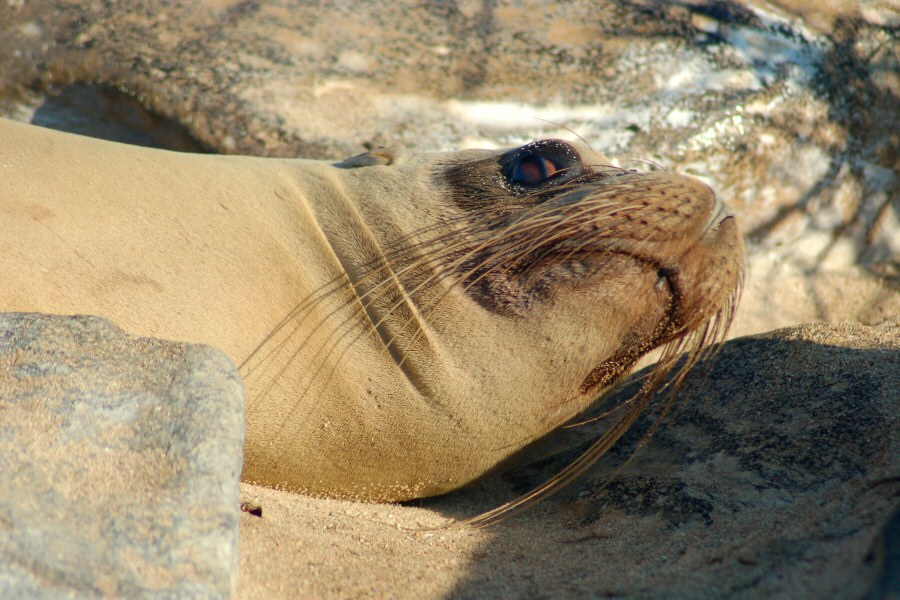 Along with the sea lions, the beach and surrounding rocks serve as resting areas for scores – probably hundreds – of red and bluish-green marine iguanas. They lay about individually and in small groups, glowing in the morning sunshine.

Most of the iguanas remain motionless with eyes closed, appearing to be asleep, although one occasionally peers back at me through my camera lens. 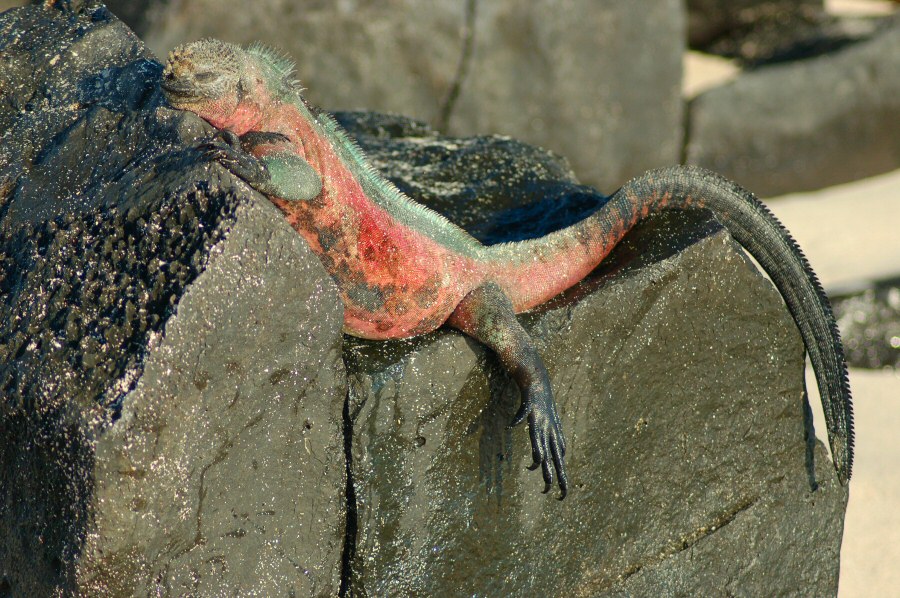 However, all is not still as the iguanas also share the rocks with quick little lava lizards. These brightly colored lizards are easy to spot, but never stay still quite long enough for me to get a good portrait of one.

Along with the lava lizards, the mocking birds — though less exotic — are also moving about. They seem friendly and welcoming, moving about under our feet as if eager to greet us. (In reality they are probably hoping we will stir up something good to eat!)

In the highest rocks, a pair of blue footed boobies stands almost out of sight. I stretch as tall as I can in order to see their bright blue feet. 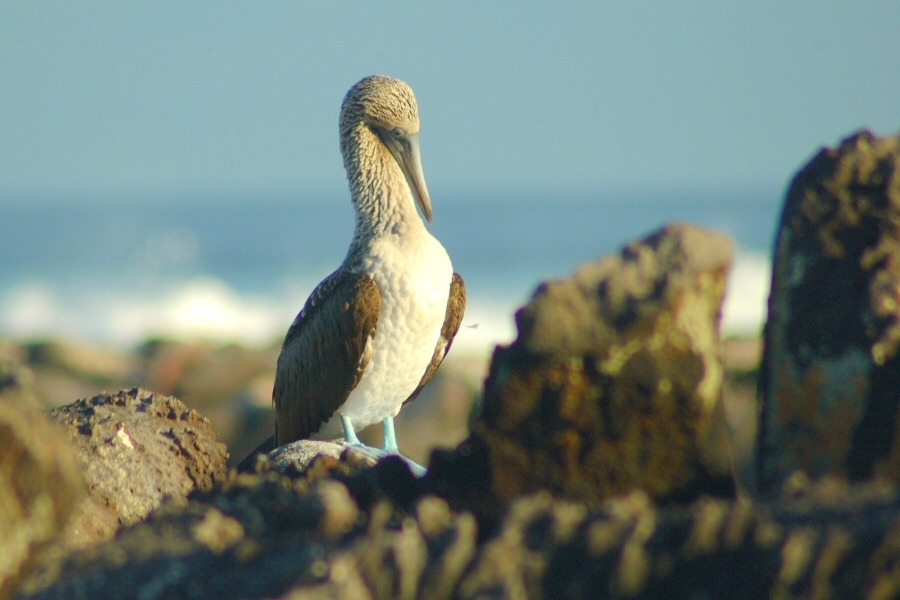 We hike through the rather desolate volcanic landscape and soon find ourselves surrounded by birds, mostly Nazca (masked) boobies. 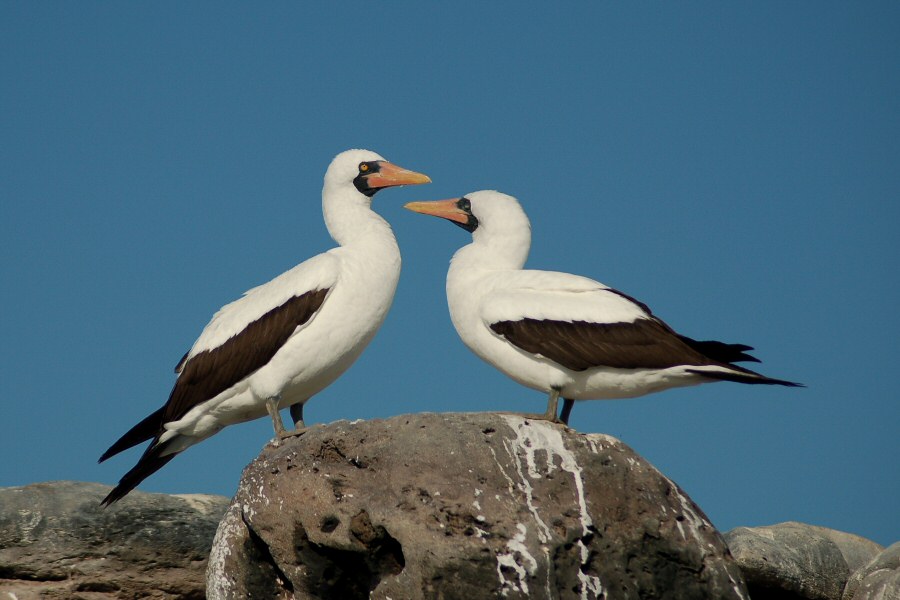 The adult boobies are bright white with long yellow bills and a clear black markings around their eyes. There are also chicks of all ages, from nude newborns still curled in the nest, to fluffy youngsters peering curiously at the world around them and older juveniles ready to head out on their own. 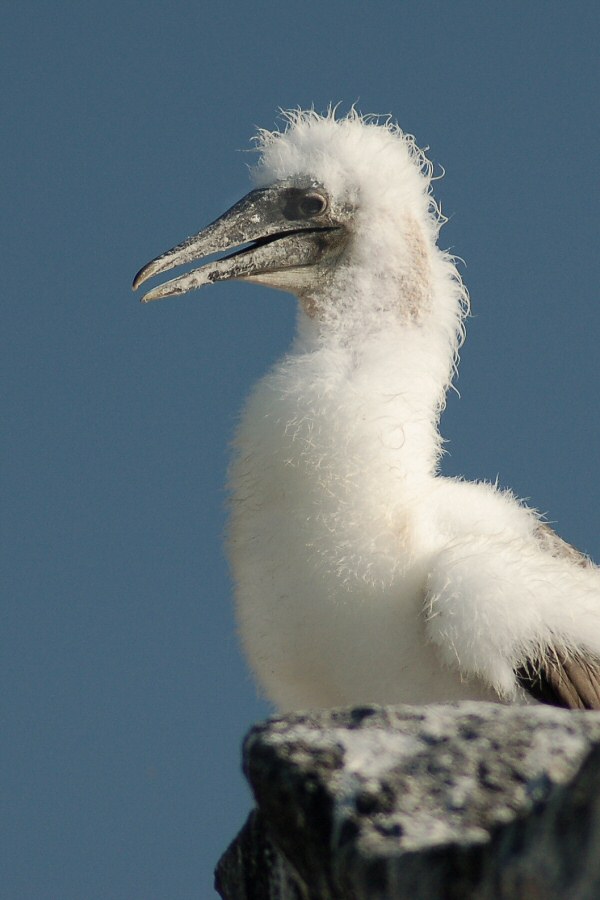 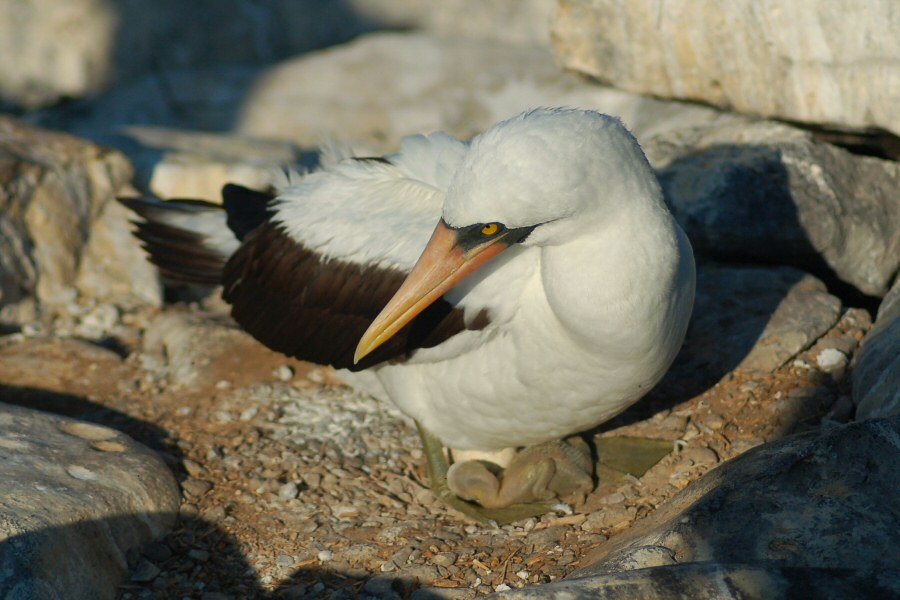 While this sounds like bird heaven with birds everywhere around us, but as was true for the sea lions, this is a harsh environment and the mortality rate must be high. It was not difficult to find the remains of baby sea lions just off the beach and here there are many signs that the fluffy chicks and young adults sitting around us preening in the sunshine are lucky to have survived to this age.

The hike leads up over the rocky terrain to a high ridge, which provides a good vantage point for observing the dramatic landscape.

From here is is easy to see the variation in landscape and plant life that can occur even on an island as small as this one.

We can also look down to the rocky beach and the ocean beyond. Although the water is quite still, the swells are still enough to send water into a blow hole and high into the air every time one surges into the rocky shore. 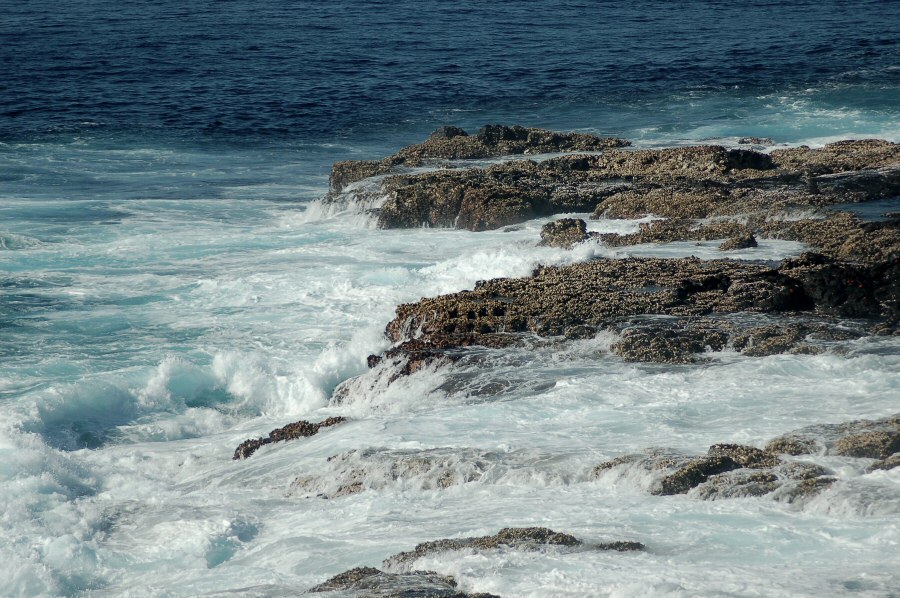 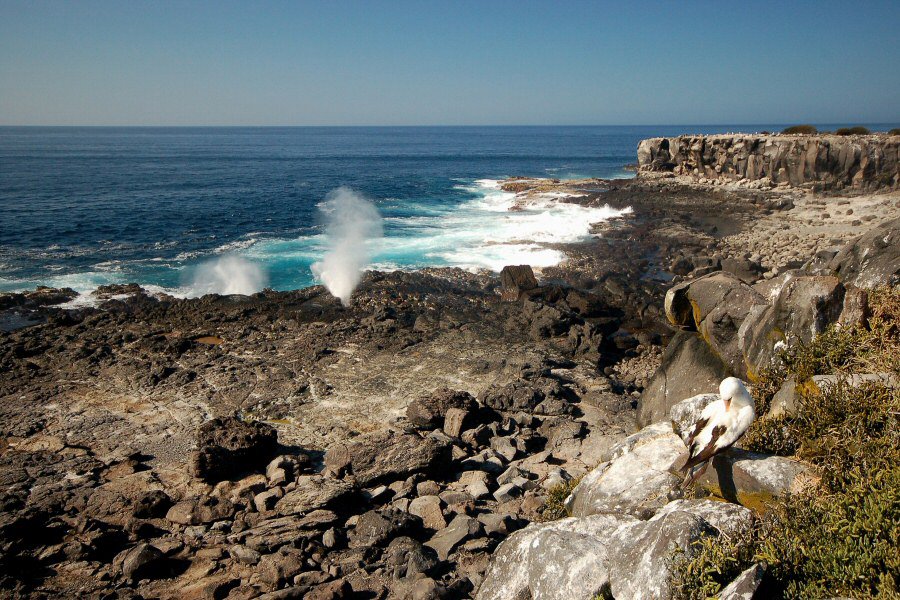 Frigate birds soar around and below me, glossy dark and elegant in the air.

Even from this distance I can see a marine iguana far below me as it swims across a quiet tide pool. Its movements are quick and graceful.

We hike further, as there are still more birds to see, including a late-to-migrate waved albatross family. 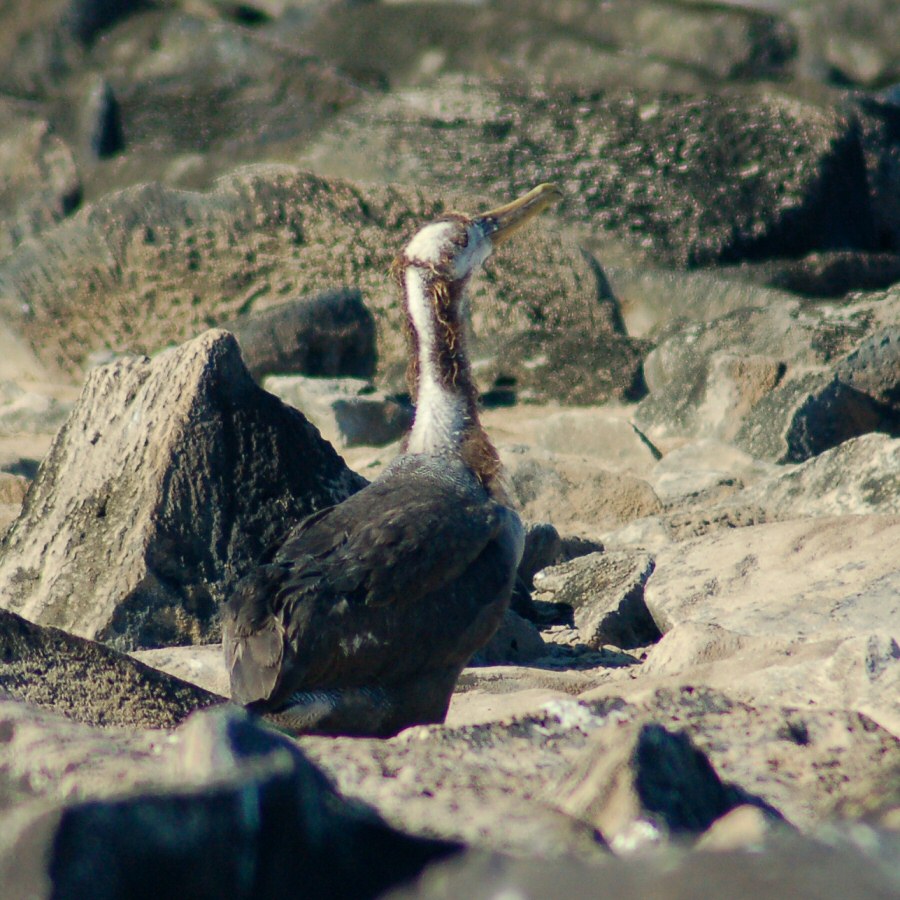 Although it is actually the first member of its family that I spot, the shaggy brown juvenile blends well into the boulders all around it. The large white and brown adults are not so well camouflaged.

This family should have left for the open sea by now, so we are lucky to see them. I just hope our luck isn’t their great misfortune.

Further along the trail we come across other birds, including a striking oyster catcher. 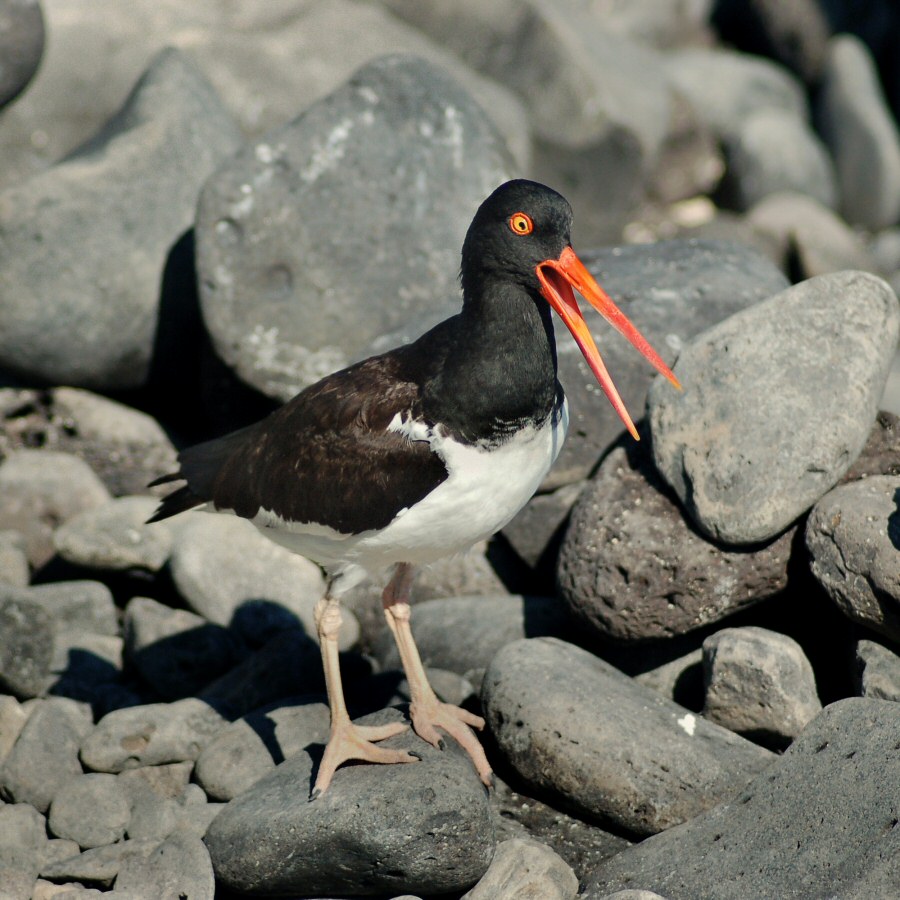 We also see a lava heron, its subtle coloring blending into the rocky ridge where it sits keeping watch.

When we return to the beach where we began our tour of the island, the sea lions, iguanas, and crabs are still resting in the sunshine. 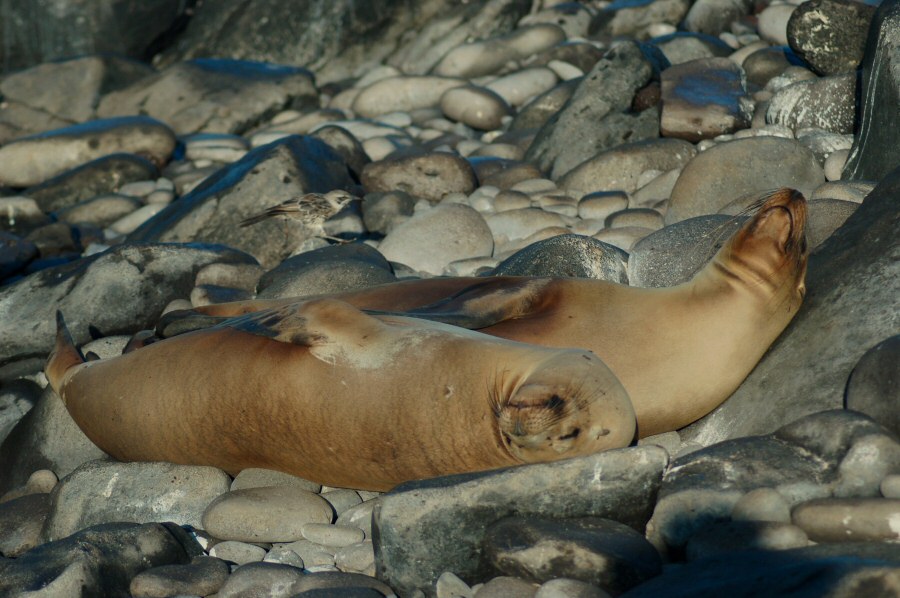 It looks like a good way to spend the day and I wish I could spend it here with them. 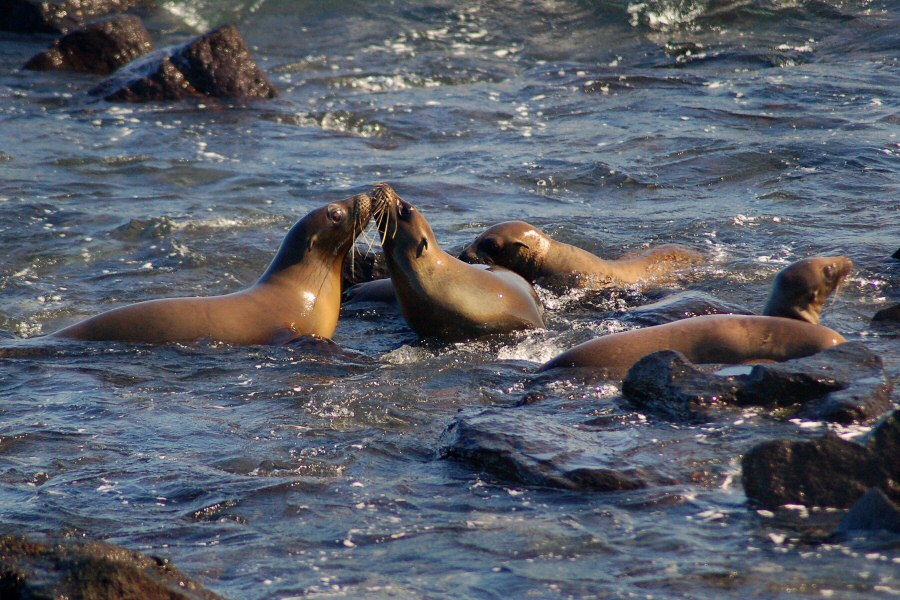 1 thought on “The Galapagos: Morning on Espanola Island”