Today, embark on a full day excursion to the Sacred Valley of the Incas with its amazing landscapes of fertile land, mystical ruins and indigenous villages.

Up early and onto the bus this New Year’s Day.

Before leaving on this trip, I had read in an article on a Peru travel site that said that on New Year’s Day in Cuzco:

. . . the elders of each community in the area (the yayas) come together to designate the candidates who are to become the highest authorities of their villages: the Varayocs.

In a festival that features gallons of chicha (maize beer) and llonque (sugarcane alcohol), the mayor or Varayoc receives the scepter or vara that symbolizes his power. . . . The varas are crafted from local wood varieties . . . and are inlaid with gold and silver. When a Varayoc steps down from his post, he ceases to hold any post in his community ever again, and becomes one of the venerable elders.

I am hoping to see this, but have been able to learn anything more about it – and it seems too silly (the yayas?!) to ask Lucho about it. Besides, it doesn’t seem worth missing the Sacred Valley just because I might be able to find the yayas’ festival (if it exists) and that it might then prove worth the search.

So I am on my way to Chíncheros.

Today I am better able to observe the adobe buildings we pass along the way. Lucho’s explanation of the adverse possession law (squatter’s rights) helps explain some otherwise perplexing things. For instance, the large, neatly fenced “lots” with a barely-begun house or tiny tacked-together shack is, in essence, a way to both stake out a future claim and hedge their bet.

Then there are the neat stacks of adobe bricks stored under tarps or inside unfinished structures. 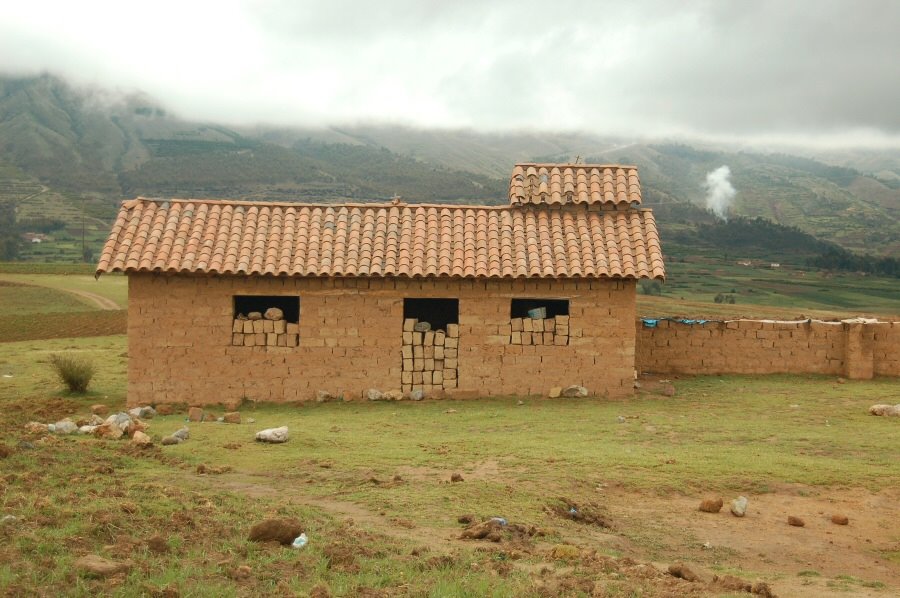 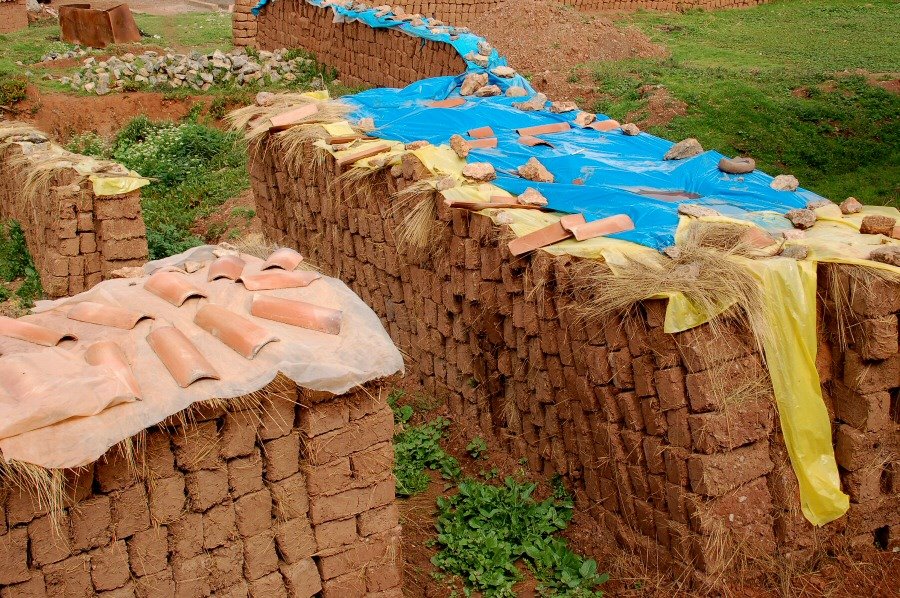 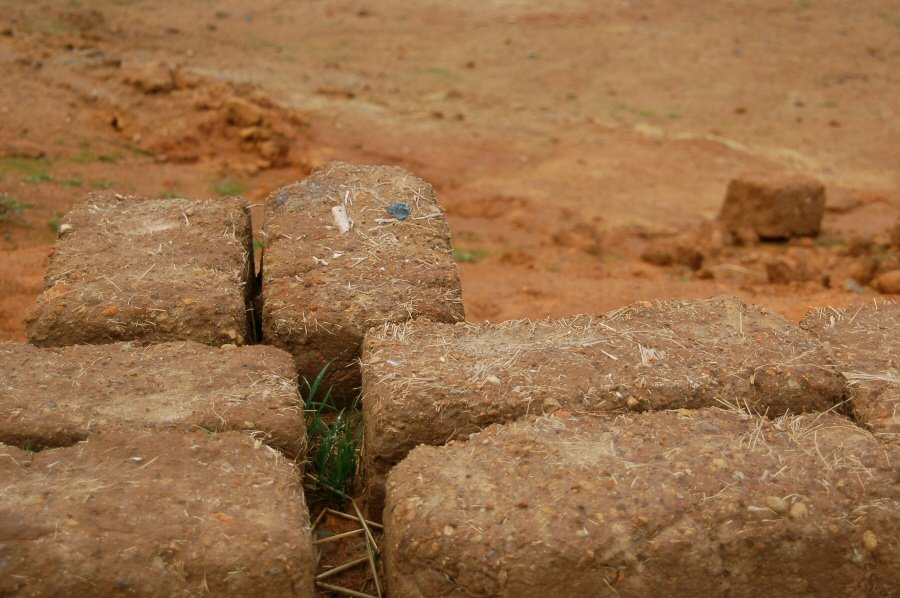 I also now see that many homes are actually built into the hillside, the earth itself forming part of the back and side walls. The bricks are made first and stored because their excavation creates the niche into which the first floor of the house will be built. Very efficient.

Our first stop in Chíncheros is in what appears to be a residential area. Off the bus, we walk down a narrow street under hot sunshine. It is a beautiful morning.

We are directed into a shady courtyard, then into to a second courtyard bathed in bright sunshine. 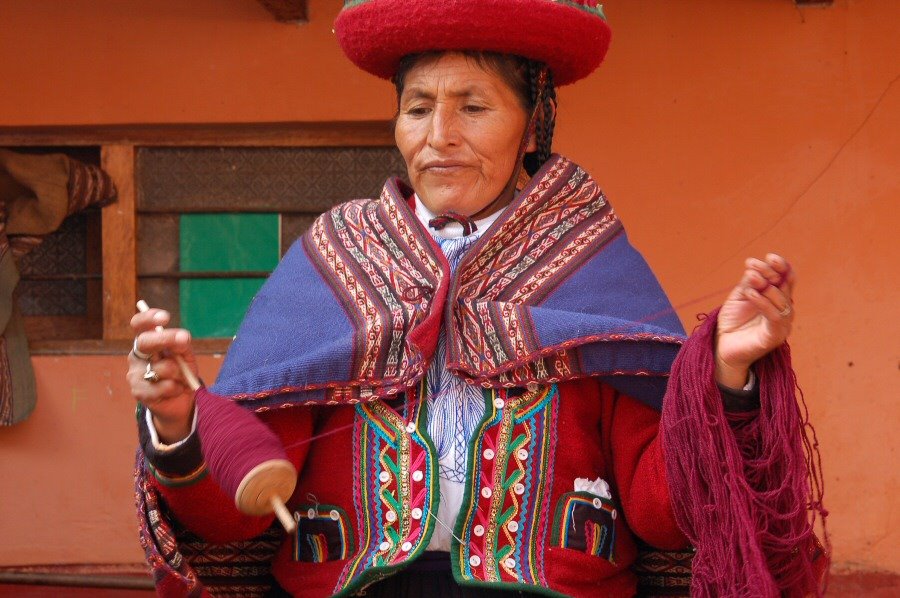 At the far end of the courtyard a line of women and girls stand, all dressed in similar traditional clothing. Each has an armful of brightly colored yarn and a spindle whorl. Most appear to be plying yarn (combining multiple threads), although a few of the older women seem to be spinning raw fiber into yarn. Their spindles move rhythmically as they work. 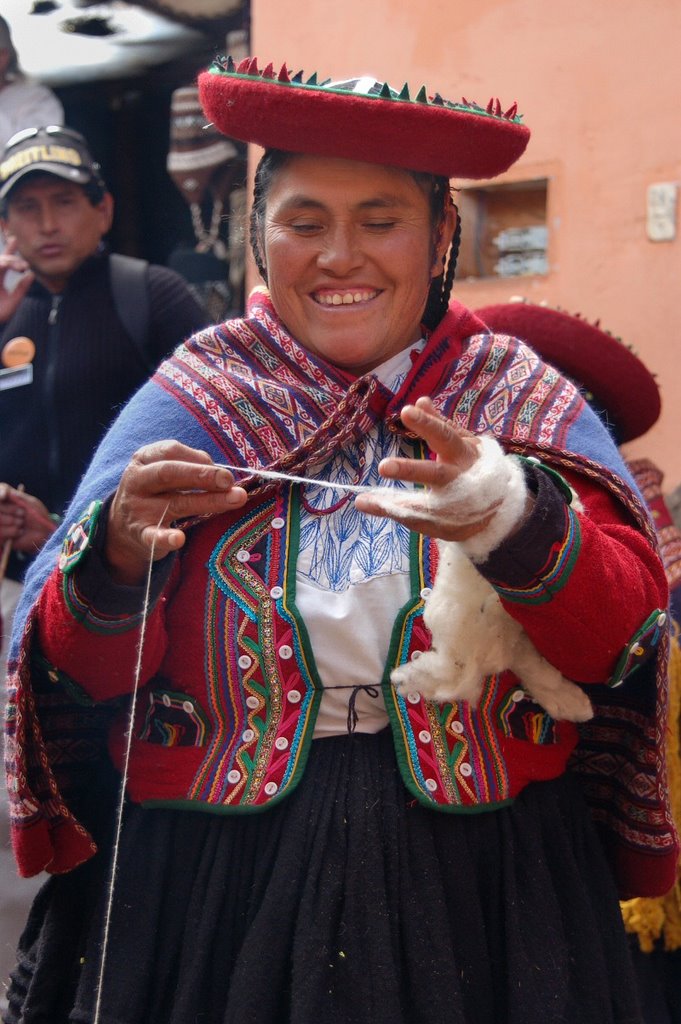 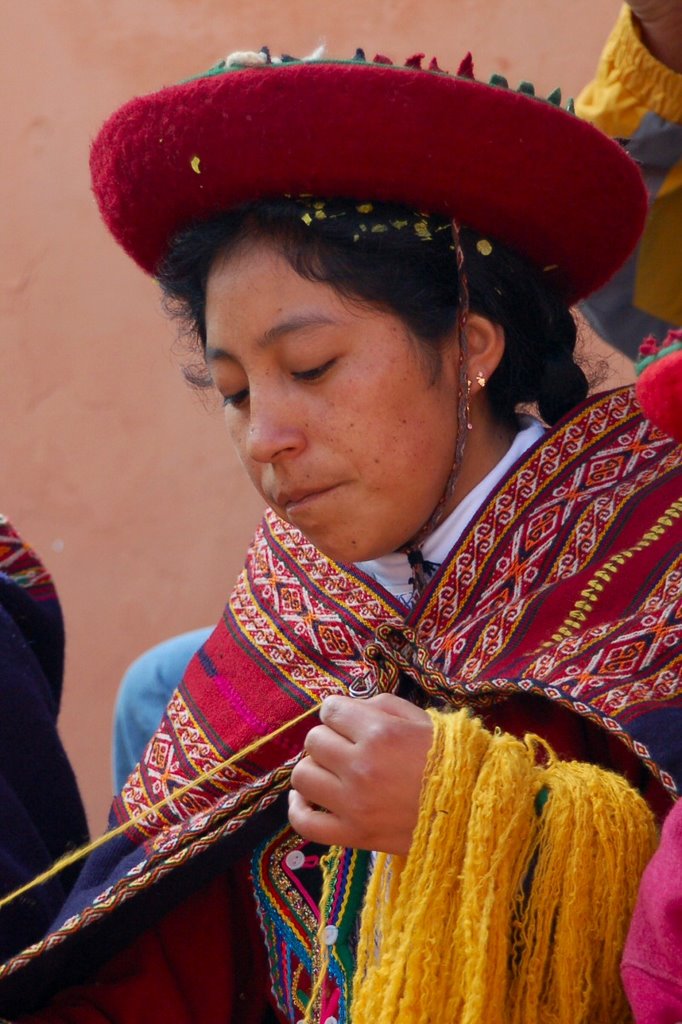 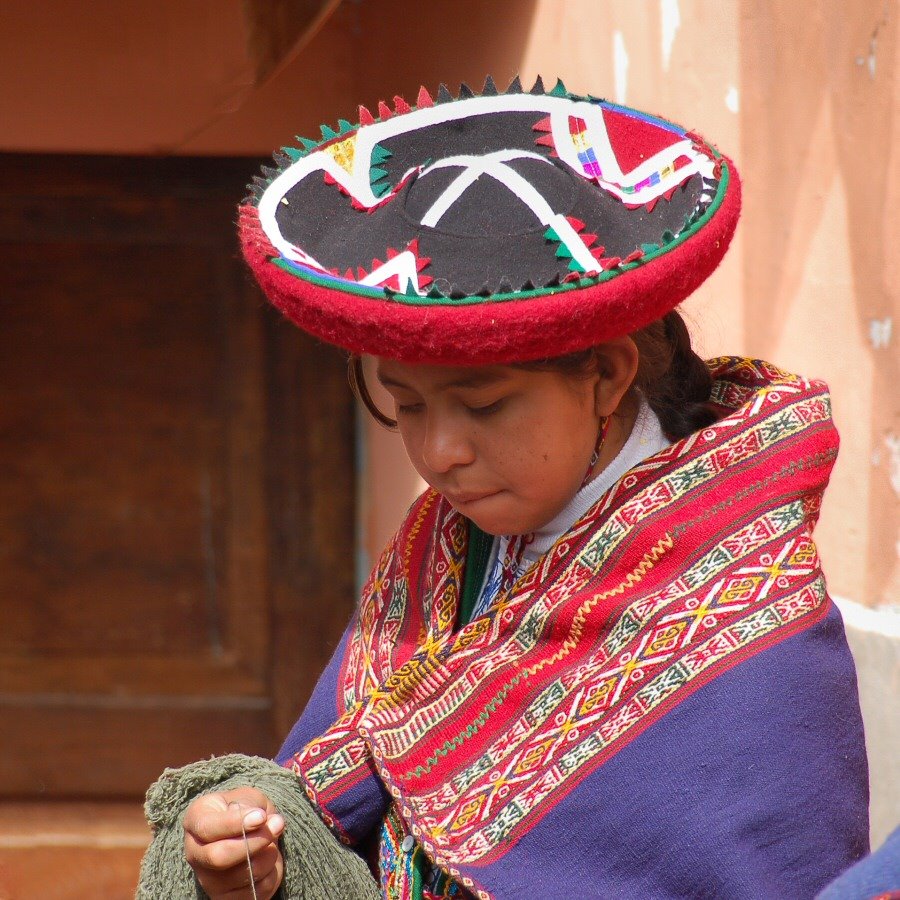 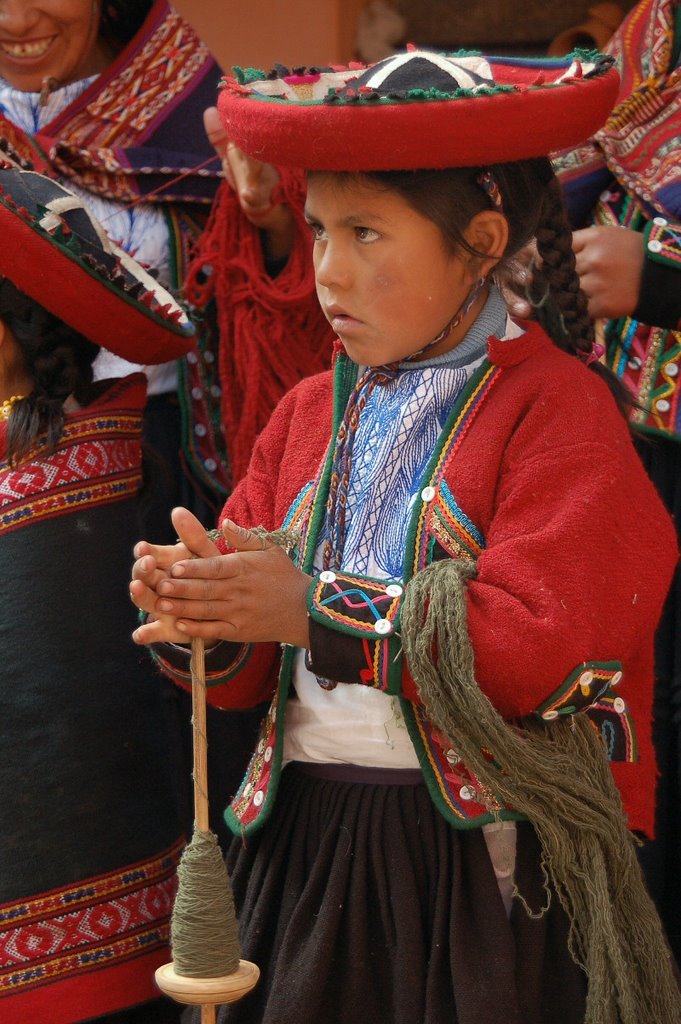 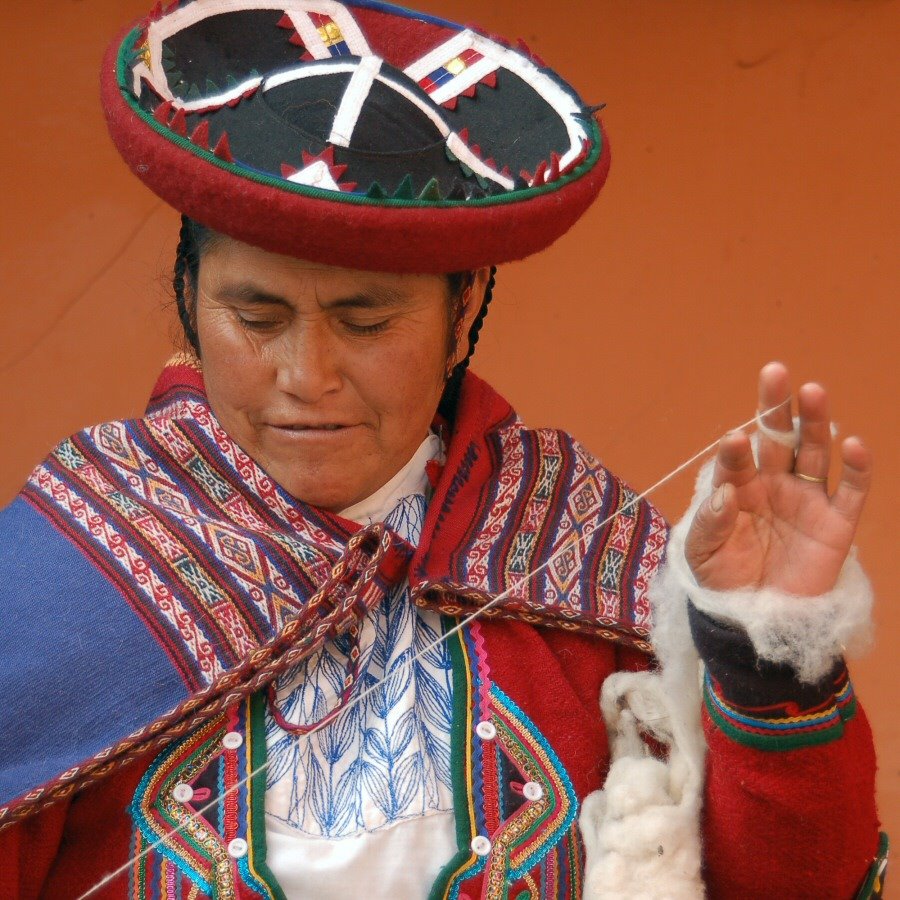 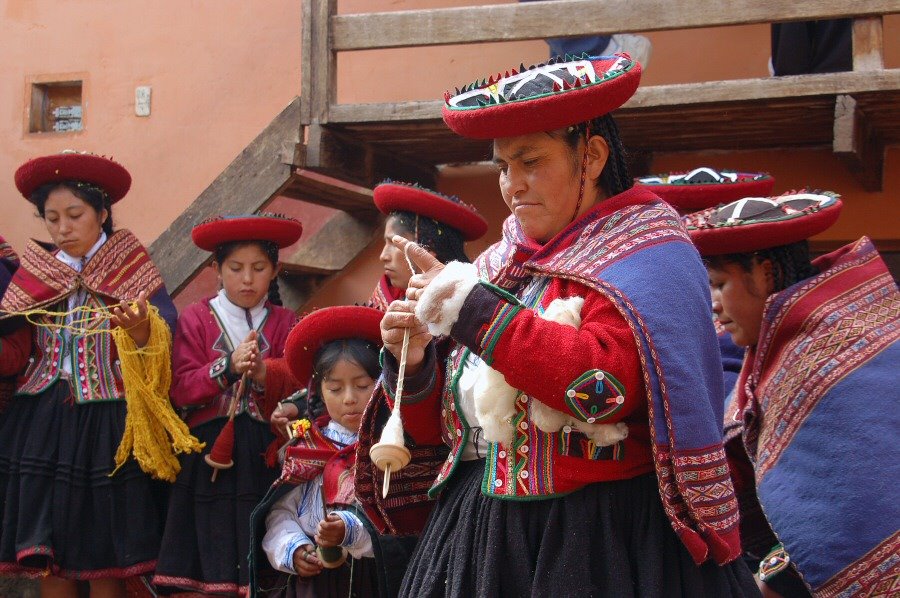 We take seats near the women for a demonstration of traditional textile practices, from the washing of alpaca wool to the weaving of fabric. 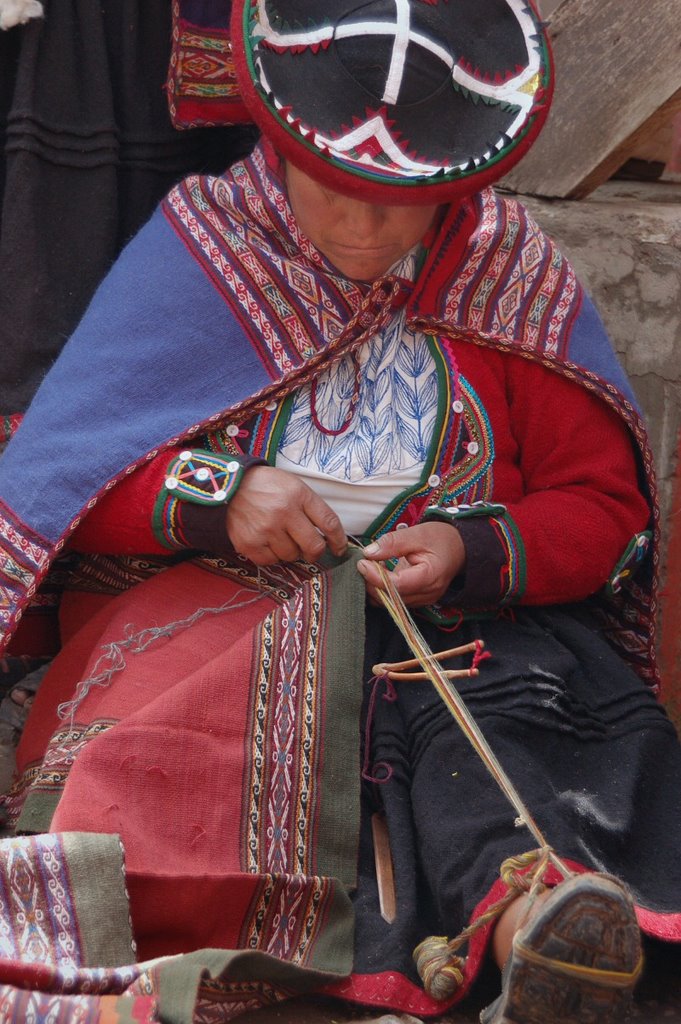 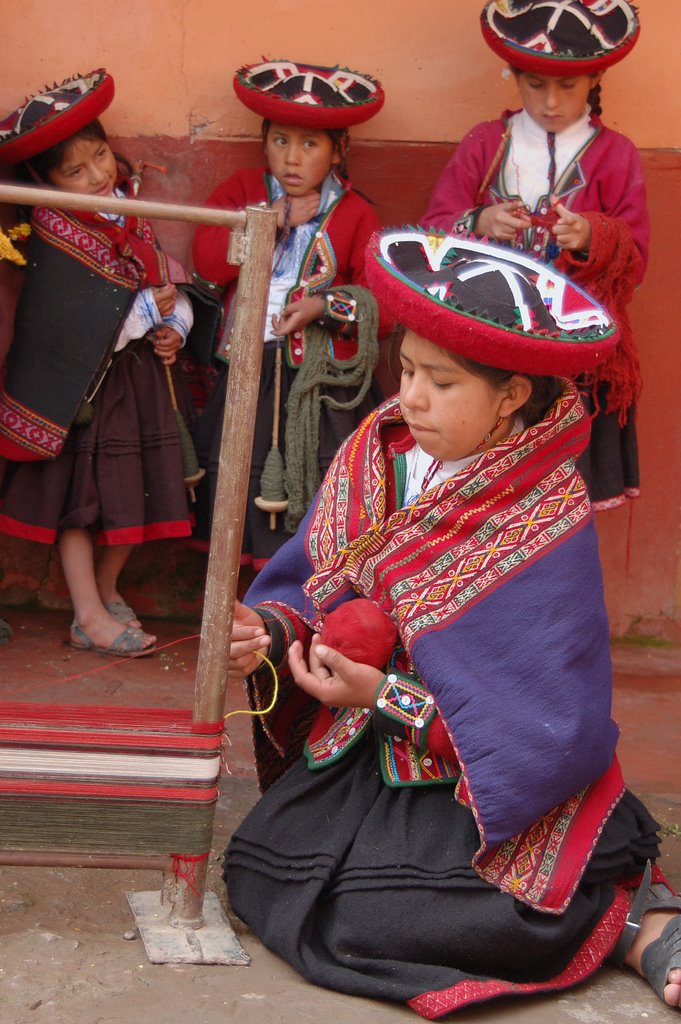 As odd as it sounds, the washing demonstration is actually quite fascinating, as the Inca use a tuber that suds up and cleans beautifully, without the harshness of many modern soaps. Why isn’t everyone using this? (And where can I buy some?!) The weaving part of the demonstration is too quick. Most of the time is actually focused on the use of natural dyes, so now I finally know what cochineal looks like. 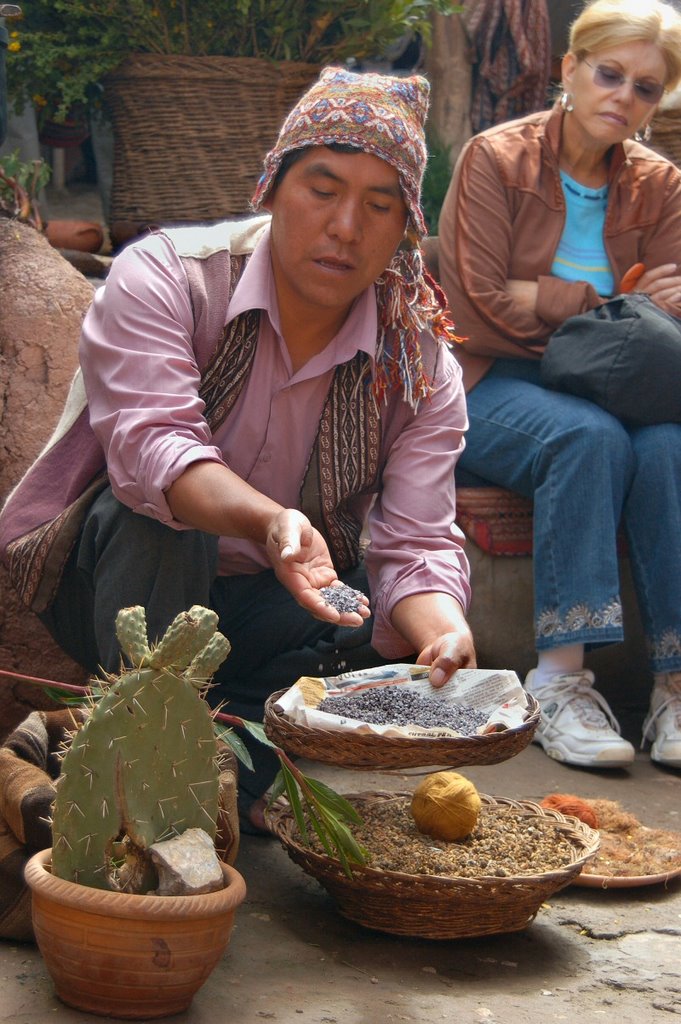 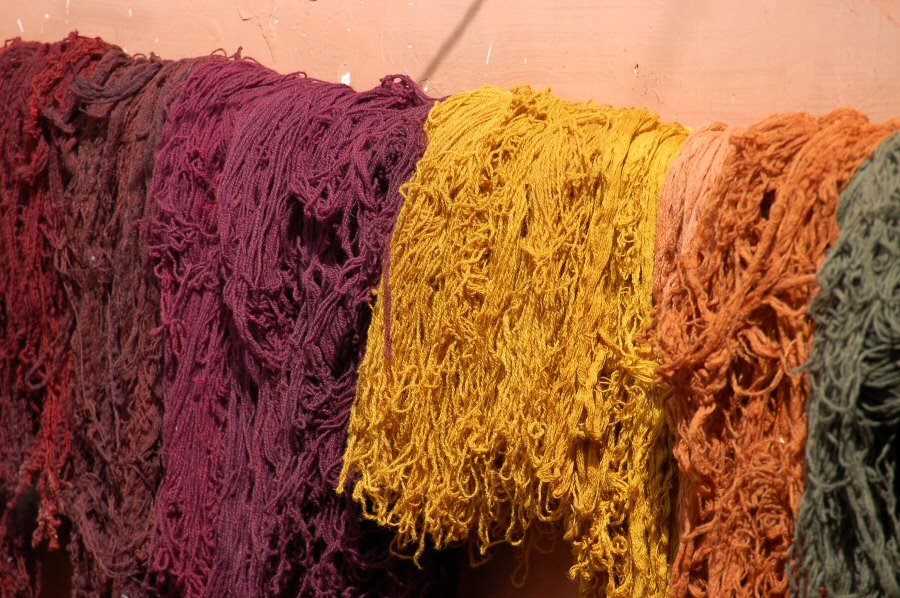 I enjoy watching the women as they steadily work their thread on the spindle whorls. 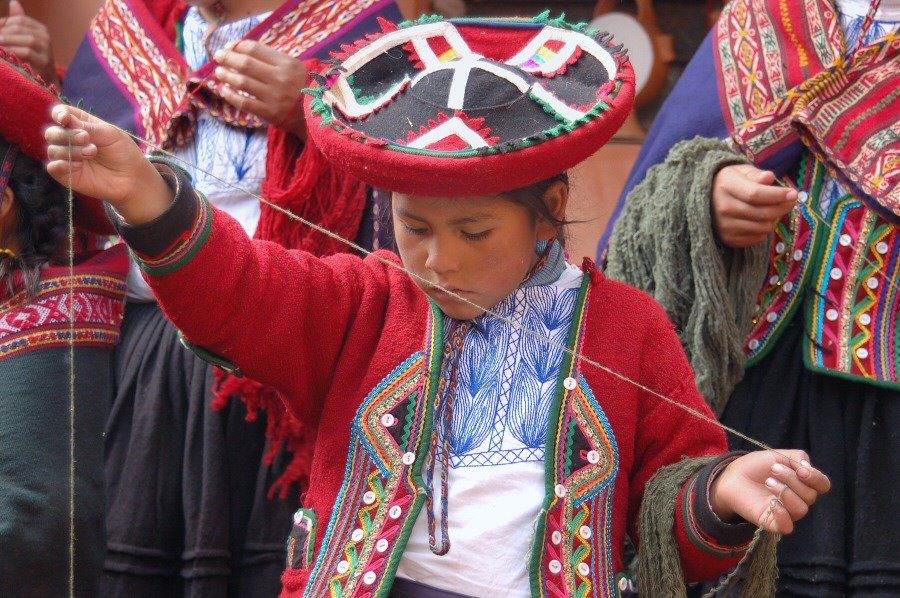 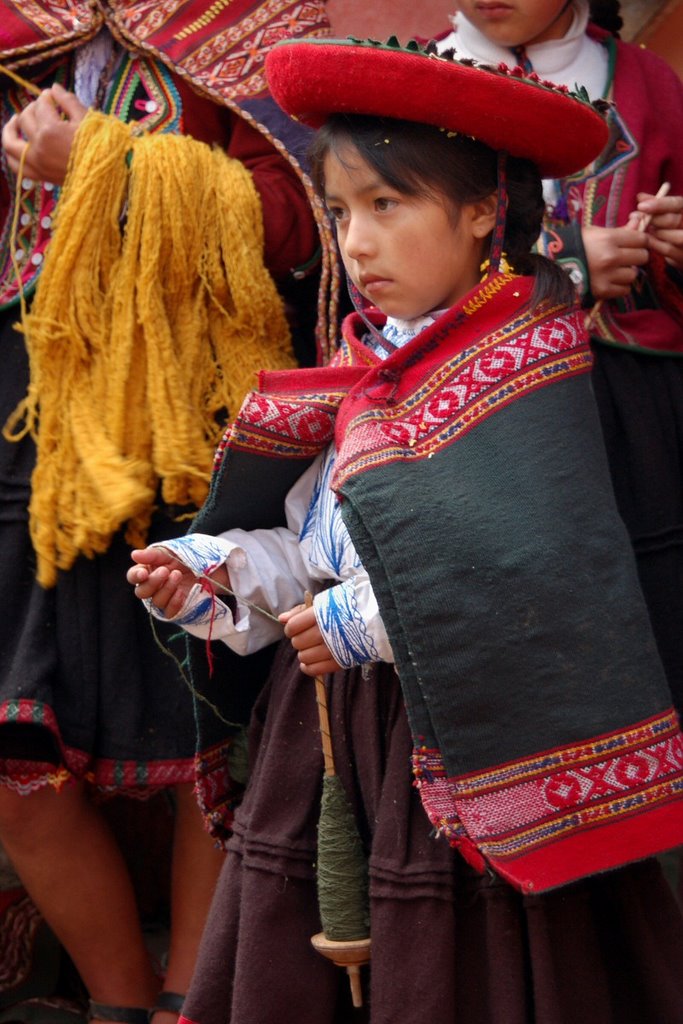 Most of the group seem content to stand there working the thread into fine yarn, but the youngest repeatedly loses interest, her spindle held still as she stares off into space. After a time an the older women – perhaps her grandmother – sharply taps her on the shoulder, sometimes hissing at her in Quechua. At that, the little girl goes back to work until she again bores of this task and lets her thoughts wander elsewhere and her spindle still. 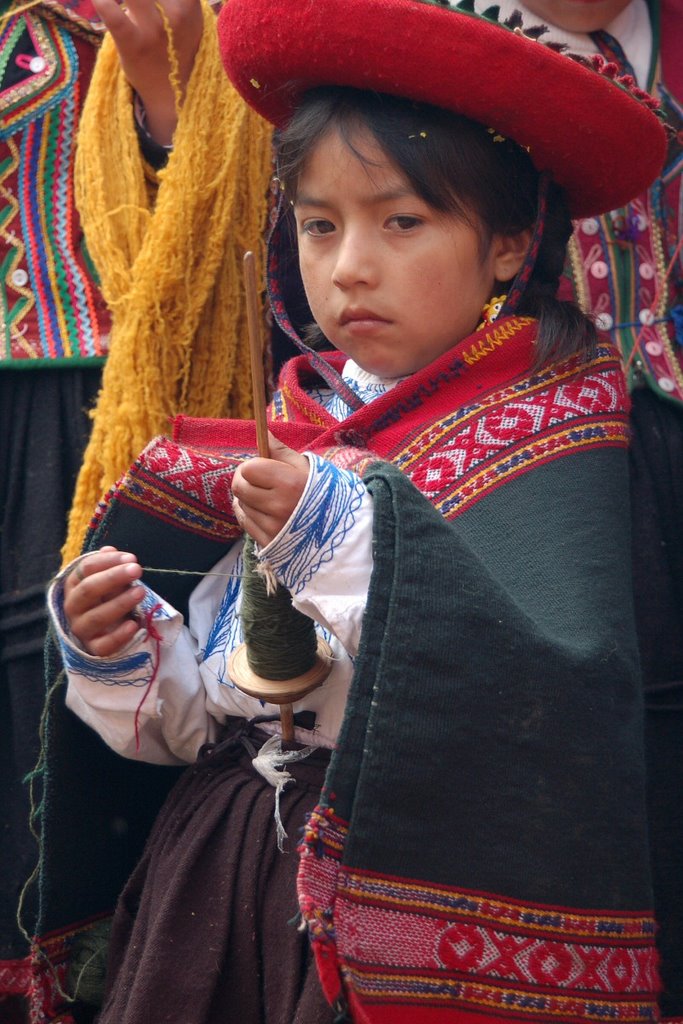 Of course, there are weavings for sale after the demonstration (each participant sells her work, the youngest girls working in teams). The work is lovely, but I have very little cash with and am unable to buy any of the lovely larger pieces I covet.

Nor do I feel I can justify the purchase of a ball of the finely spun alpaca yarn. It is beautiful, as fine and soft as silk thread and, left undyed, the silver blue color of winter. The price is reasonable, but would take most of my cash and what would I do with such a large amount of this delicate yarn? I leave without it and soon it becomes my one shopping regret of the trip. 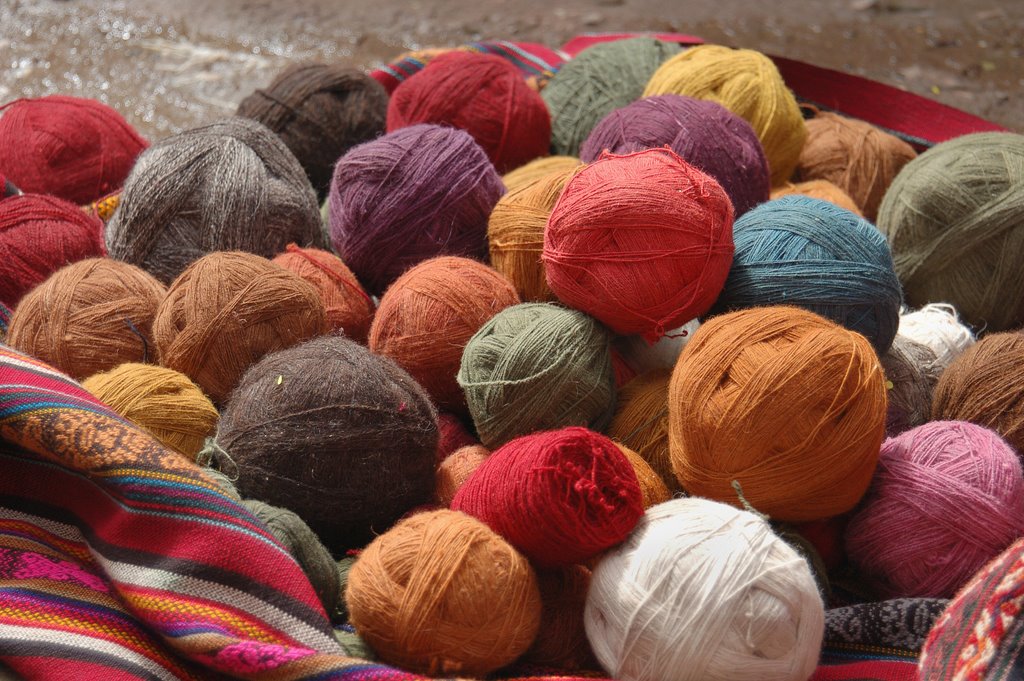 From here we join the local residents in the short walk to the market. 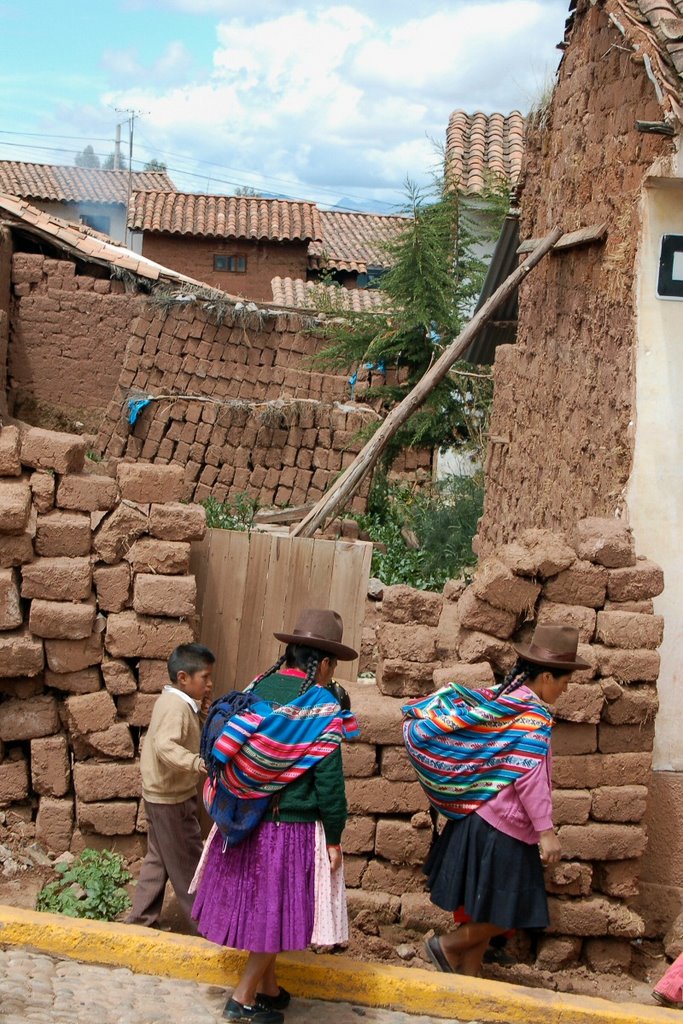 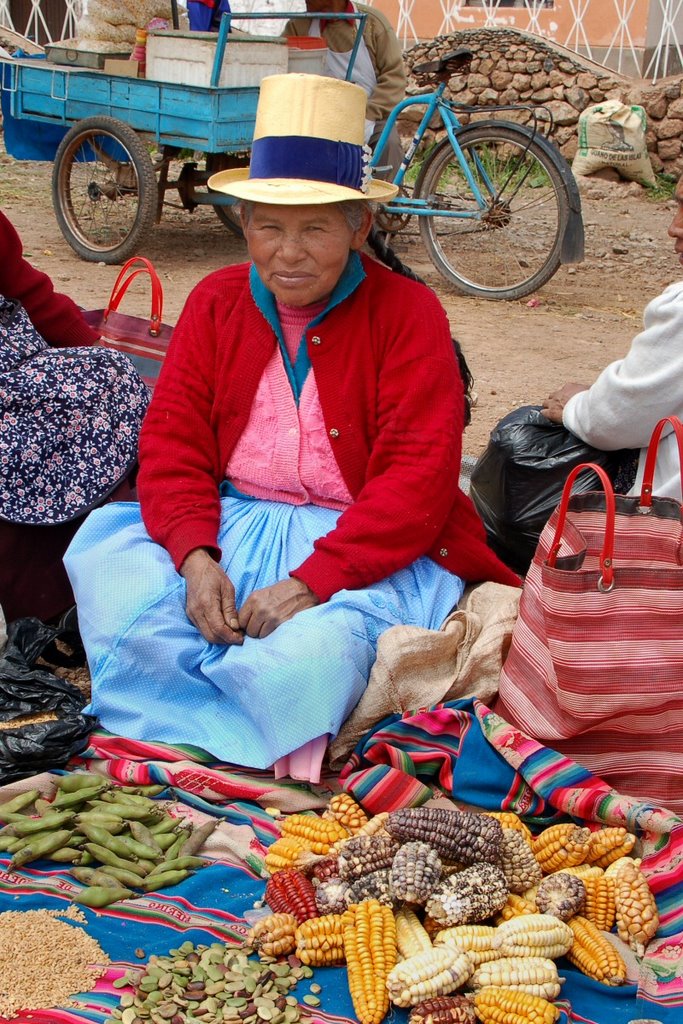 Despite the shelter provided by low thatched structures that house most of the market, it feels open and exposed, lying below the hills that sweep off into the distance and the broad sky brooding overhead.

The people, however, are generally relaxed and friendly and as they good-naturedly show off their merchandise and pose for pictures. 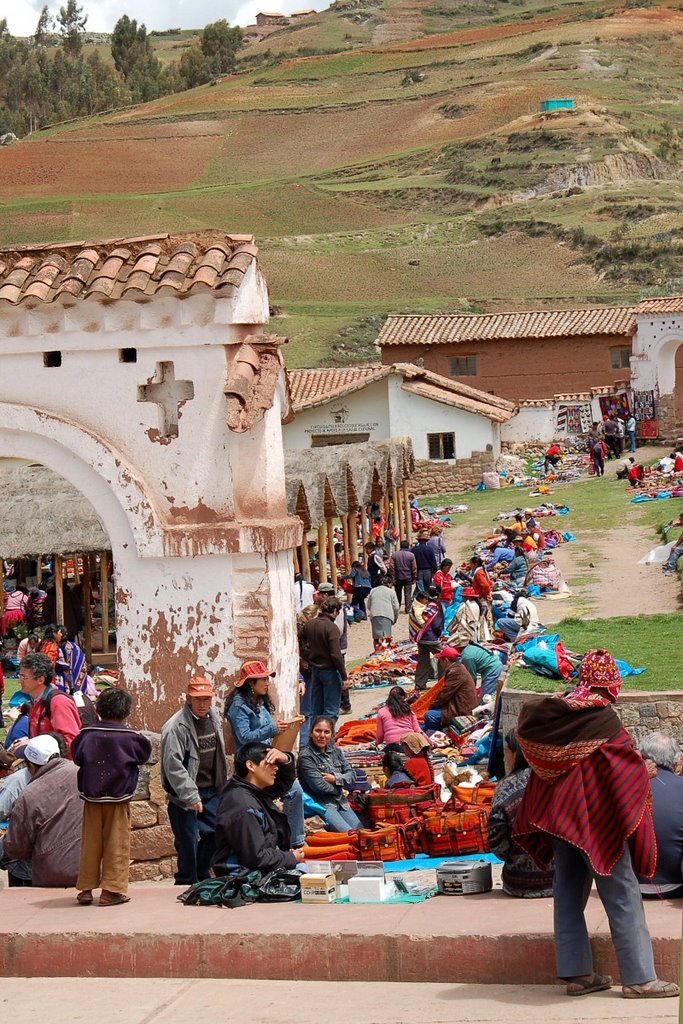 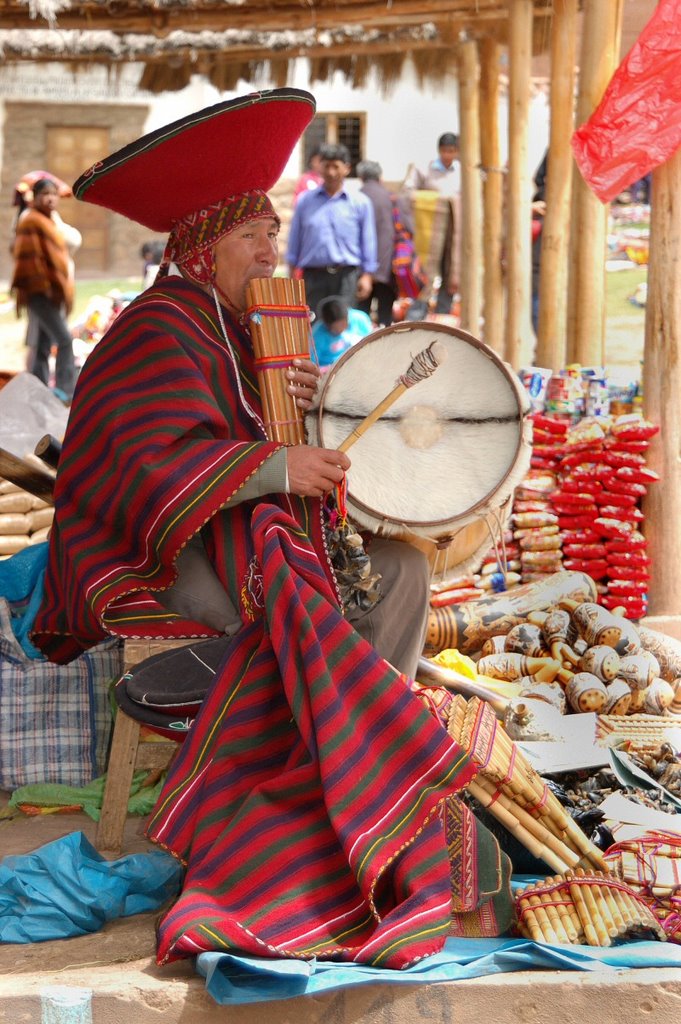 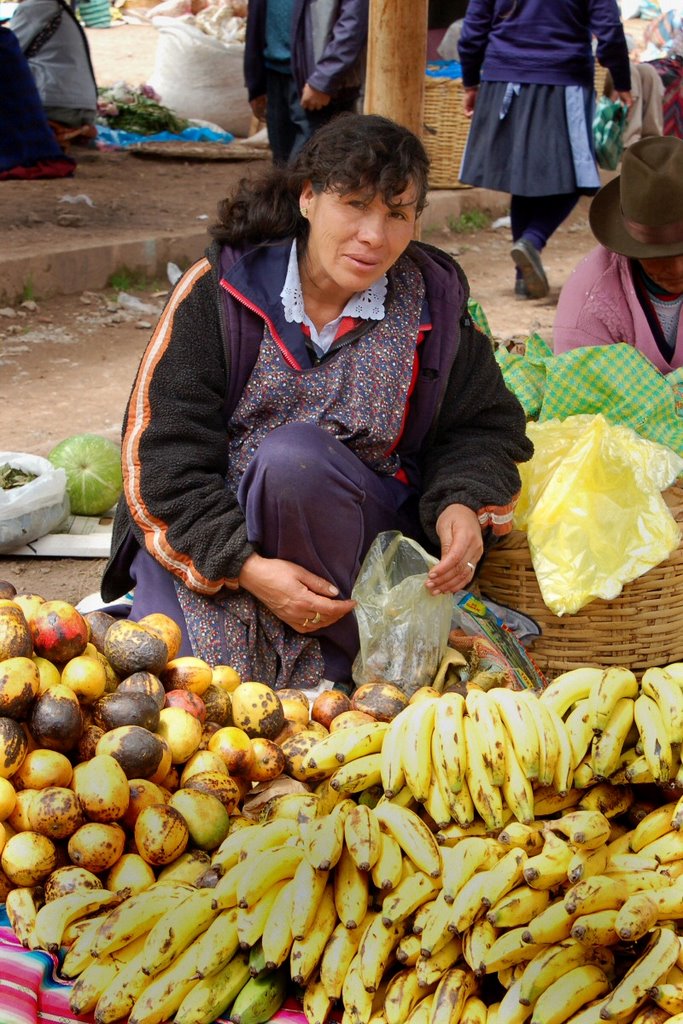 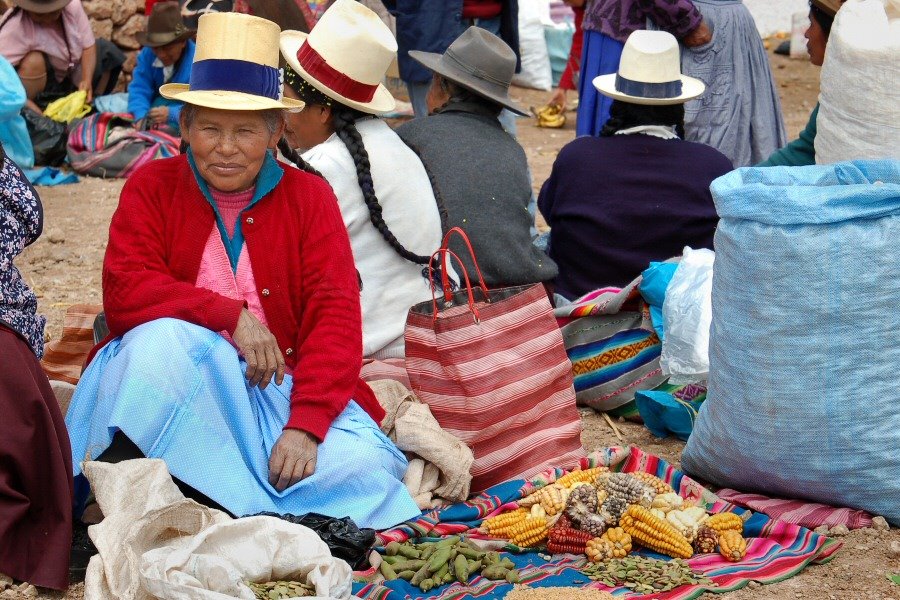 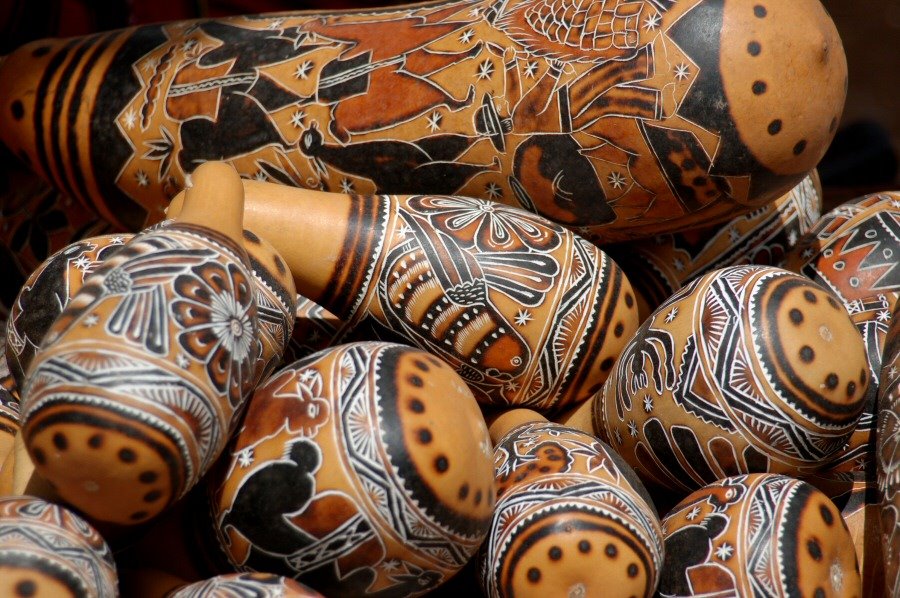 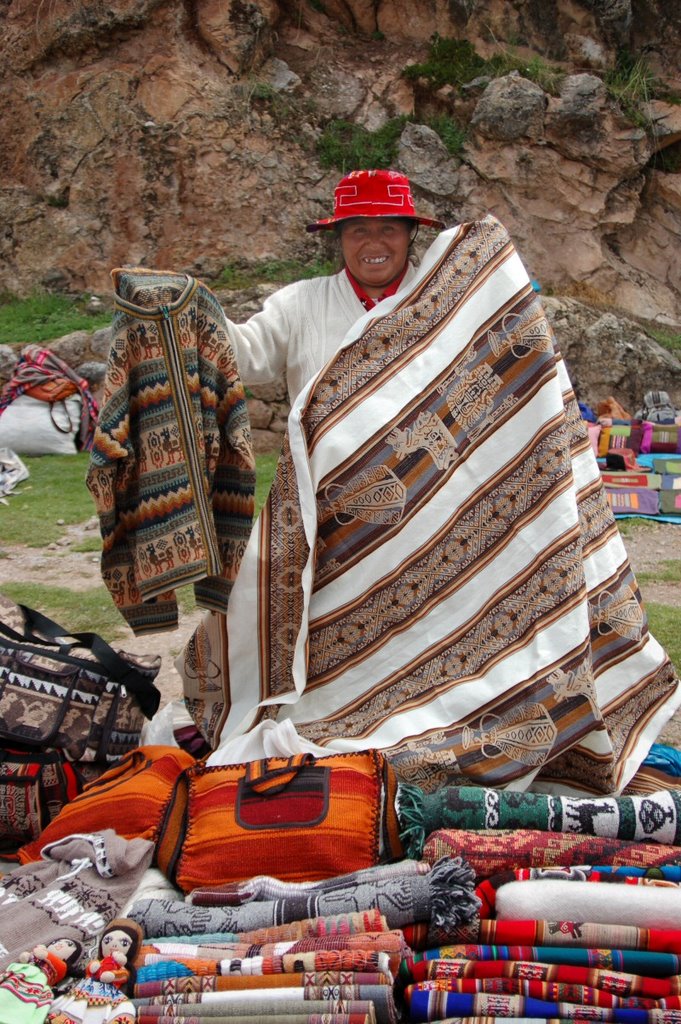 Back at the bus, an elderly man stands near the door, knitting an intricately patterned cap using the finest yarn I have ever seen. For whatever reason, I don’t take a picture.

Next Post: Ollantaytambo
Celebrating the Holidays in South America
All Peru posts