At breakfast Pepito happily escorts us to our regular table, but Mark and Kathy arrive late and Nico and Monique (who don’t have any activities scheduled until later) sleep in. It is a sad and lonely start to the day.

Arrive at Bachas Beach on Santa Cruz Island where you may observe bodysurfing sea lions, marine iguanas and sea turtles. Swim or stroll along the white-sanded beach. 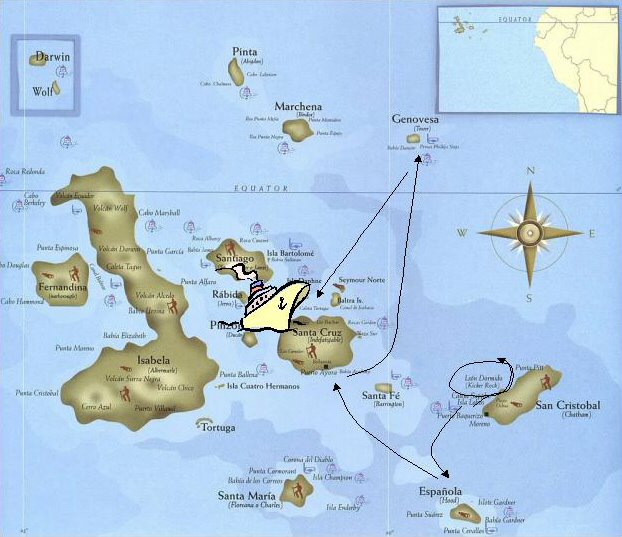 From the Zodiac our guide points out a nearby object in the water: A mating sea turtle. We stop and watch them – well, we watch a turtle’s back floating in the water. Occasionally a head or flipper rises above the surface before disappearing again with a splash. 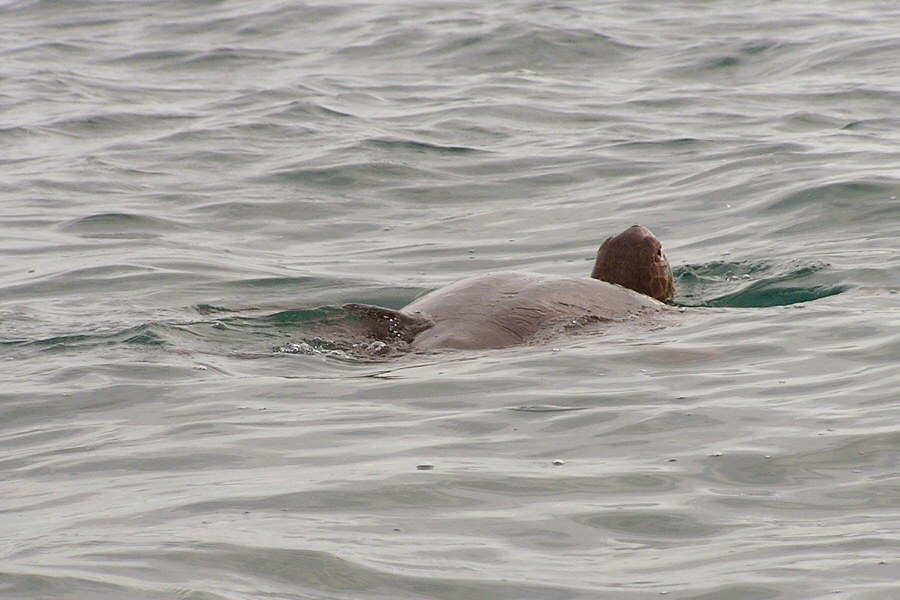 The wet landing deposits us at a lovely white sand beach surrounded by jagged dark rock.

From land we can see a number of green sea turtles bobbing in the water just off shore. On shore, however, the only signs of their presence are the tracks they’ve left across the beach.

The morning is dark and cloudy, but we round a bend and an island that wouldn’t look out of place in the Caribbean floats in the multi-shade turquoise water. 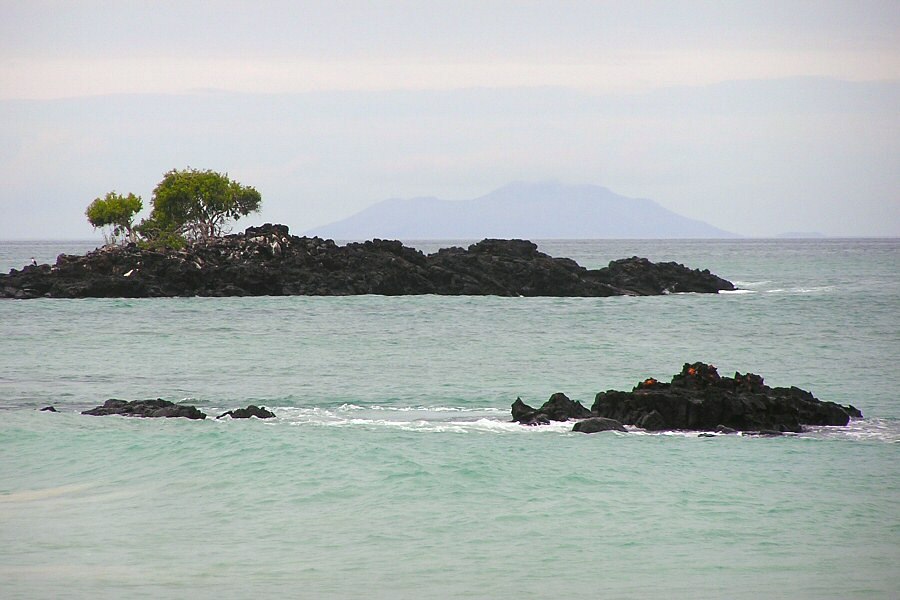 In the foreground the dark rocks are speckled with bright-colored Sally lightfoot crabs. 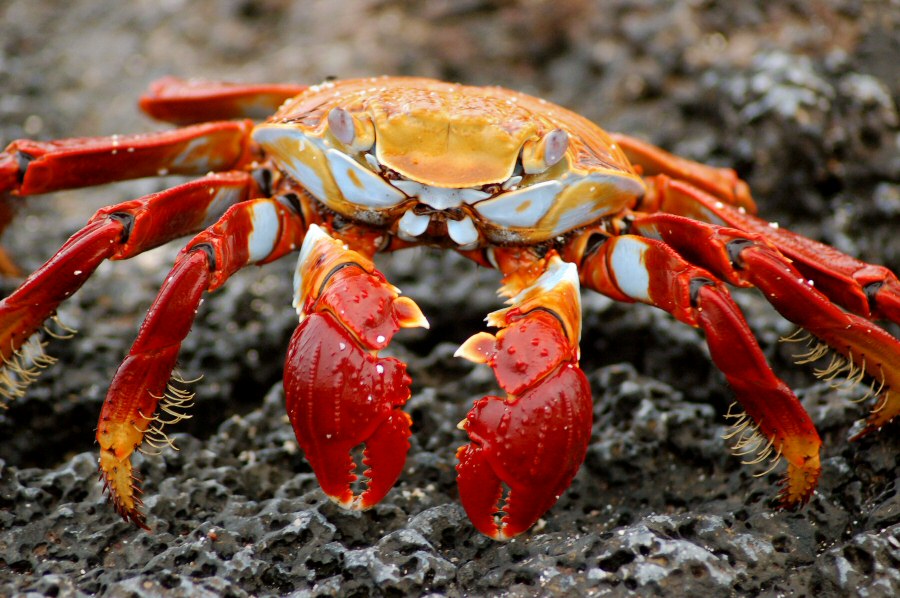 We walk around the edge of the beach to a large lagoon. A flamingo stands in each of two widely separated areas of the lagoon. Each stands head down, feeding in the water. 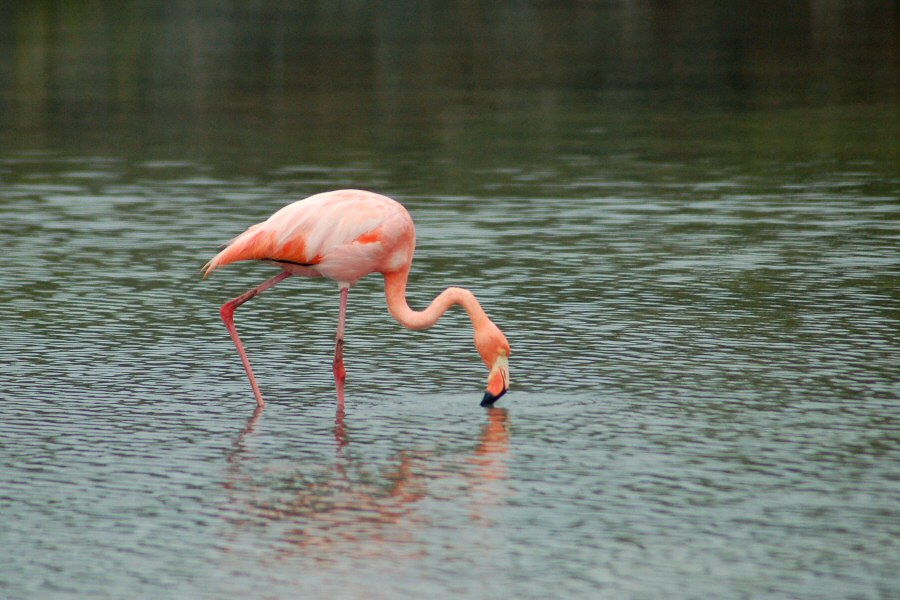 The flamingos look as exotic and incongruous as the lagoon itself, surrounded as it is by greenery while the harsh, dramatic volcanic landscape rises in the near distance. It is such a strange place! 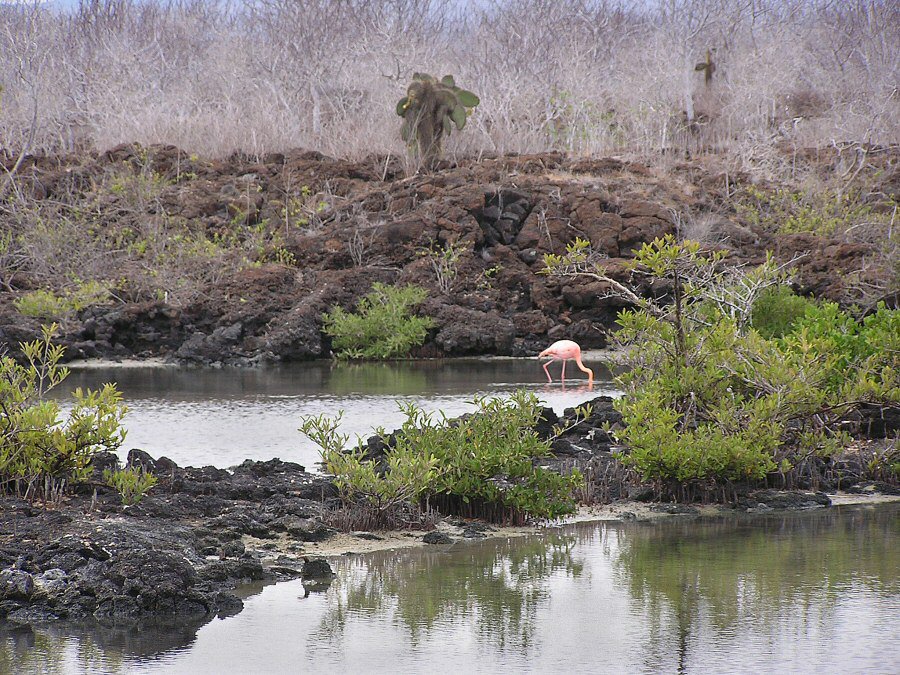 There are also dark-colored marine iguanas huddled together along the lagoon’s sandy shore. 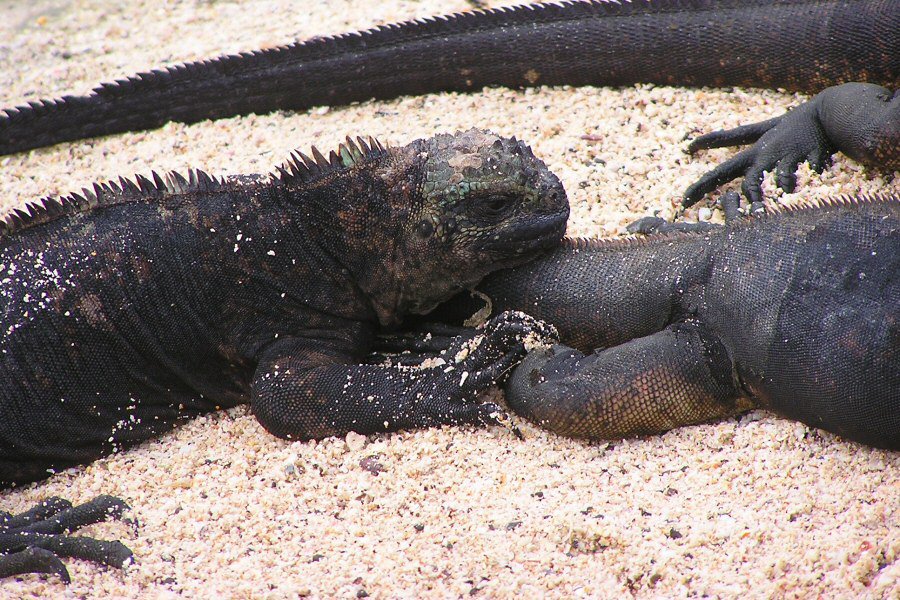 A few are moving about this morning, some even swimming through the shallow waters, but most snooze in the sand. 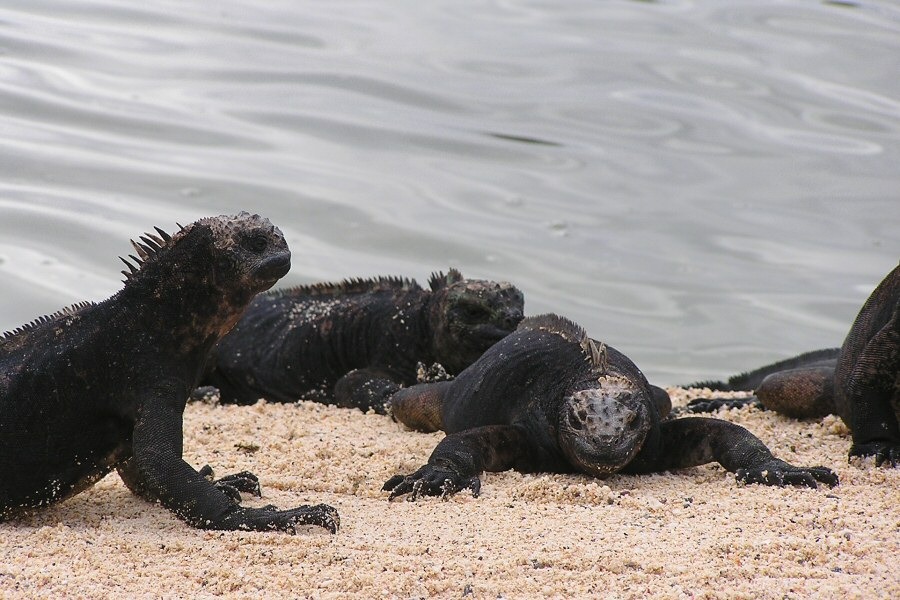 The landscape all around us is stark and harsh, the deceptively thick vegetation prickly and unfriendly. 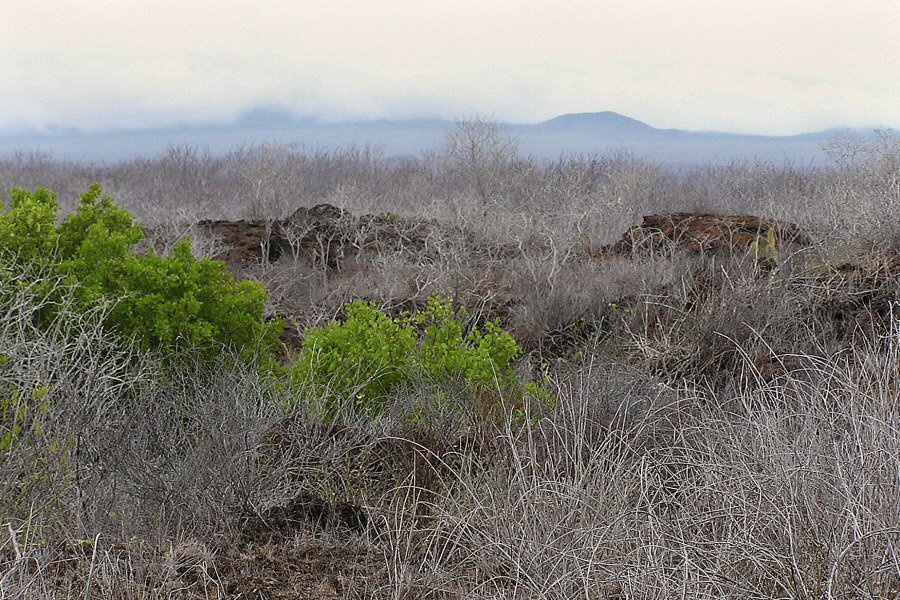 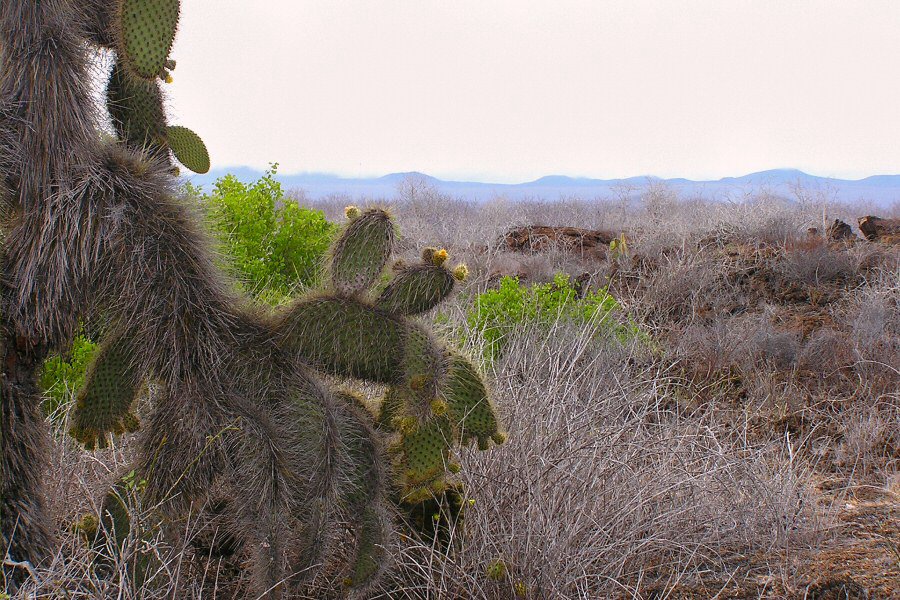 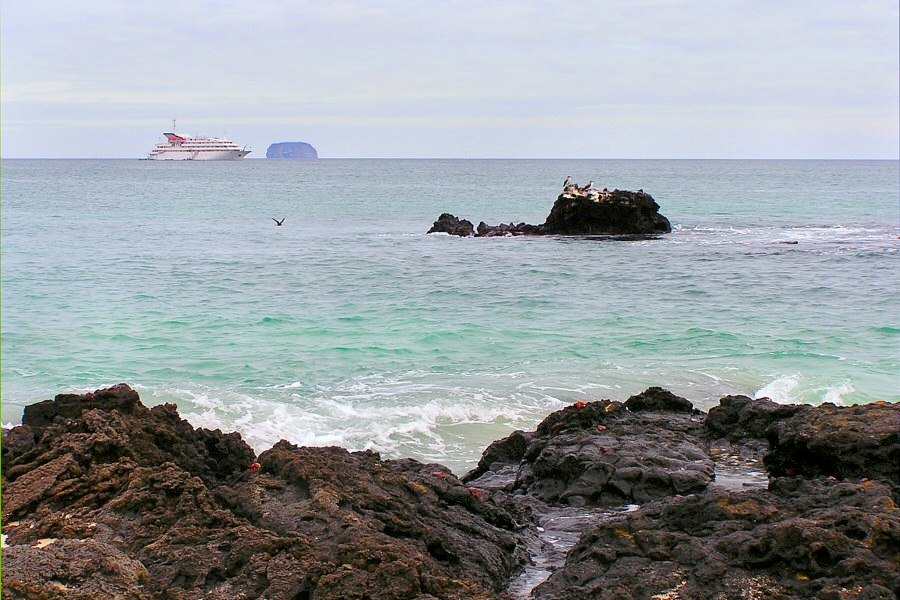 The sun is beginning to break through the dark sky as we board the Zodiac. The beach looks so inviting now! Once we have returned to the ship Nico and Monique will come here to spend most of the afternoon viewing the flamingos in the lagoon and playing on the beach.

As we watch the beach disappear into the distance, I wish I could stay here too. 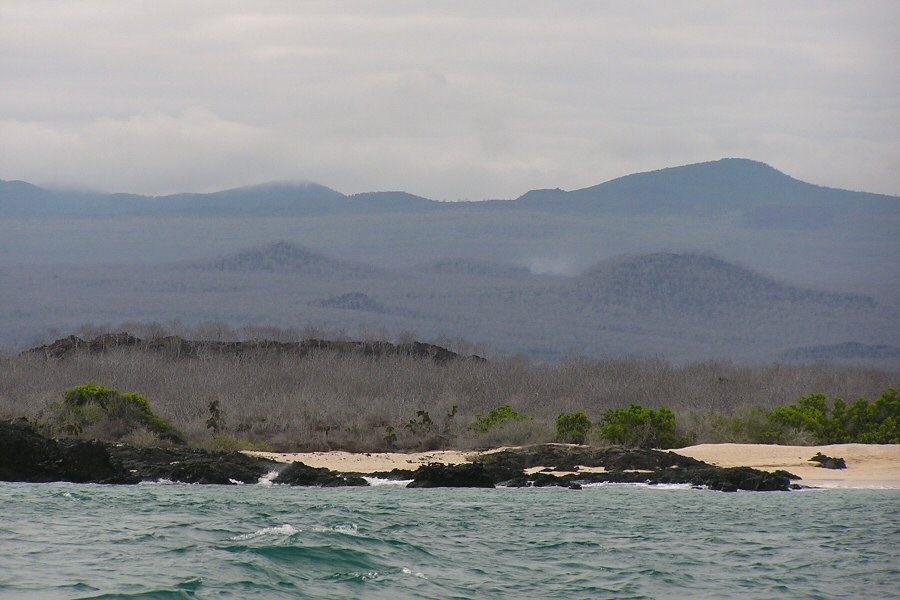 We meet Nico and Monique on board as our group (which is leaving today) exchanges places with their group (which has four more days in these islands). I am very glad we have a chance to say goodbye.

Later the Zodiac returns us to a public dock where we will meet the bus to the airport.

The bus stop is already occupied by local residents.

1 thought on “Leaving the Galapagos”