We head off to tour the city on a lovely sunny Sunday morning.Our first stop is a scenic overlook that gives us a view of one of the more exclusive areas of Quito. However, the view is limited this morning by the haze that hangs in wisps around the base of the mountains.Closer at hand is a comfortable looking patio that would offer its owners a wonderful view every day. It looks so inviting.

Since this is a tourist stop, the vendors are awaiting us with the usual selection of carvings, textiles, paintings, hats, and jewelry.

Next we head toward Quito’s Old Town, stopping first at the basilica, which is dramatically situated to overlook the city.

The basilica turns out to be a prime example of how my attempt to balance seeing the world through a viewfinder with listening to the tour guide closely enough to catch all the relevant details sometimes fails. I generally try to listen just enough to get the general idea, completely halting my photography to concentrate on the guide’s spiel only when it includes a personal story or other details I’m unlikely to learn elsewhere. I figure I can do a little research later to find out what year a building was constructed, the structure’s dimensions, and the like.

Unfortunately, the facts about some sites prove more illusive than others, with the Basilica del Voto Nacional being a prime example. 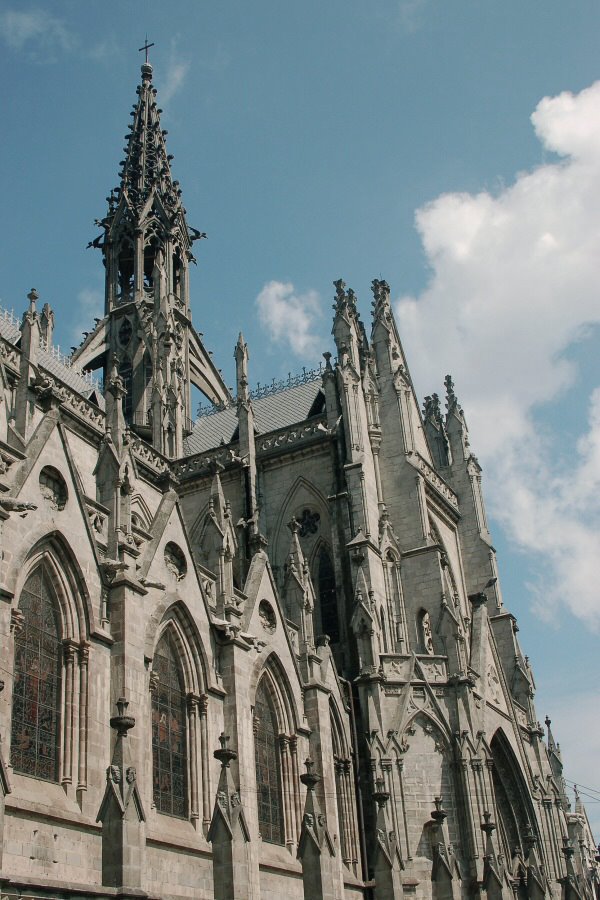 As near as I can piece together, land was donated and the first work on the basilica begun in the last quarter of the 1800s, with at least some construction beginning as early as 1892. After that, the picture becomes murkier.

Evidently construction really began in earnest in the 1920s, but the structure remains incomplete today. Or at least, that seems to be the case. The building is either incomplete or falling apart — I found it hard to tell which. (Was that niche empty because the statue has yet to be installed or because it has fallen out?)

I did hear Eduardo explain that the basilica was designed during a period of great national pride. This is obvious. At first glance the basilica looks like a typical European neo-Gothic church with intricately carved window frames, dramatic and highly detailed windows, and a profusion of gargoyles.

Looking closer, however, it is obvious that the structure is a celebration of Ecuadorian flora and fauna: Stone rosettes reflect native plants and flowers and the gargoyles depict Ecuador’s most famous fauna, including the Galapagos tortoise, sea lion, iguana, and a variety of bird life.

From the Basilica we walk toward Old Town.

The Basilica dominates the skyline here, but every block offers enticing new scenes.

Each street is lined with ornate buildings, many painted bright colors and some still decorated for Christmas.

It makes for wonderful walking.

At every street intersection we are treated to a view of the city sloping away below us or sweeping up above us, the Winged Mary standing high above, keeping watch over her city.

On this first Sunday after Epiphany she is still surrounded by Christmas lights. At night I’ve stood at my window in the hotel room and watched these lights gleaming through the darkness.

Next Post: A Parade Through Quito
Celebrating the holidays in South America