Our guide Eduardo leads us through the colorful colonial buildings and into an open courtyard inside the Archbishop’s Palace, which is lined with balconies hosting small shops and delightful-looking restaurants.

I wish we had more time in Quito so we could spend a couple of evenings here.

After lingering a bit, we walk through a cool dark passageway and unexpectedly find ourselves facing a sunny plaza, the Plaza Grande or Independence Plaza.

A large statue presides over the plaza’s center and, from where I stand, palm fronds frame a graceful white tower of the cathedral Iglesia El Sagrario. The church practicaly sparkels in the sun.

To the right is the Palacio de Gobierno, Ecuador’s seat of government, topped by the Ecuadorian flag.

It is a warm and inviting tropical scene.

The plaza itself is lively, with the parade just ending and a festival of some sort beginning. Food stands and amplifiers are already in place and families are gathering. Young children swarm around.

Eduardo carefully moves our group around the edge of the square, avoiding both young women with baby strollers and playing children.

We go around the corner and stop there, at the side of the religious complex that includes El Sagrario. From here Eduardo points out some of graceful colonial mansions and churches all around us. This area is filled with churches and steeples rise into the sky on all sides. Religious and secular alike, at our level all these buildings have wonderful details.

Slightly farther down the street I am facing the overwhelmingly ornate façade of La Compania. 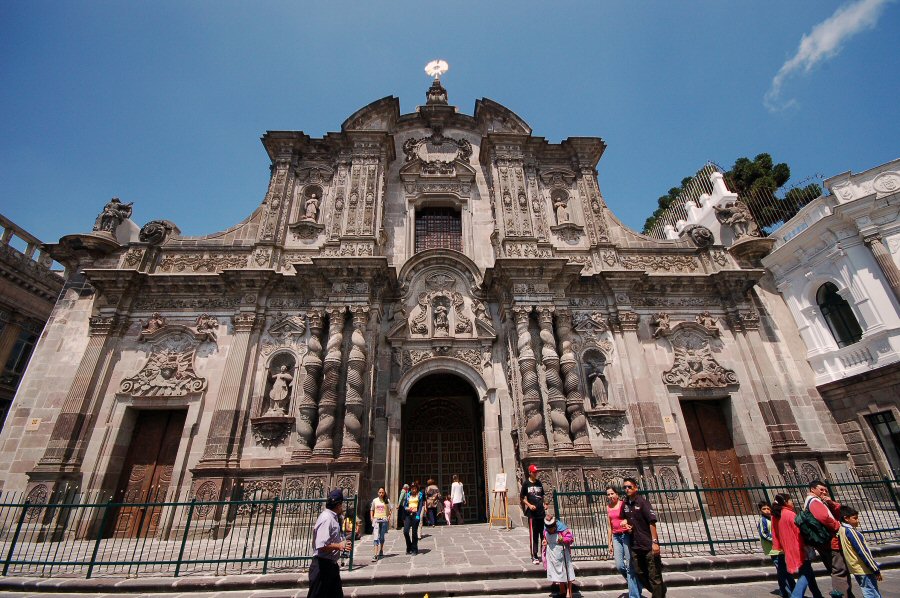 Eduardo has been scurrying about and now explains that we will be able to enter the church once mass ends. While we wait along the narrow street, street vendors offer postcards for sale, giving us a preview of the splendor to come.

Finally the doors of La Compania open and people begin to slowly stream out of the church. A few of the women carry flowers. Soon the departing worshippers are joined by a man dressed in street clothes and carrying a statue of what appears to be Jesus as a toddler. A few of the women with flowers stop him in order to spend a moment with the statue. Some sprinkle flower petals around and over the statue and its bearer. I know that today is the first Sunday after Epiphany, but my mid-west Lutheran upbringing is inadequate to explain the scene before me. Eduardo is equally unable to provide an explanation. (I wish Lucho were here — I’m sure he would be able to provide me with an explanation!)

Once the crowd at the entrance to the church dissipates, we are allowed inside.

Inside it is dark and quiet, but the walls and ceilings glisten in the low golden light. Built by the Jesuits between 1605 and 1768, La Compania is awash in tons of gold. Worshipers are gathering for the next service, so I opt not to walk to stand between them and the alter at the front of the sanctuary. Even from the side aisle it is clear that the alter and it’s surround is an astounding mass of gold. Most of this is too heavy and Baroque for my taste, but toward the front of the church, high up and to either side of the sanctuary, the decoration becomes abstract and geometric, actually Moorish in appearance. I decide this is my favorite feature – until we return to the door to leave. At the door where we first entered I am startled to realize that a delicate circular staircase twists up along one side of the door, while an identical faux version is painted on the other side. The staircase is light and airy, simple yet graceful, and I am delighted by it.

On the street again we continue our tour. By now the sun is getting hot and the streets are busy. 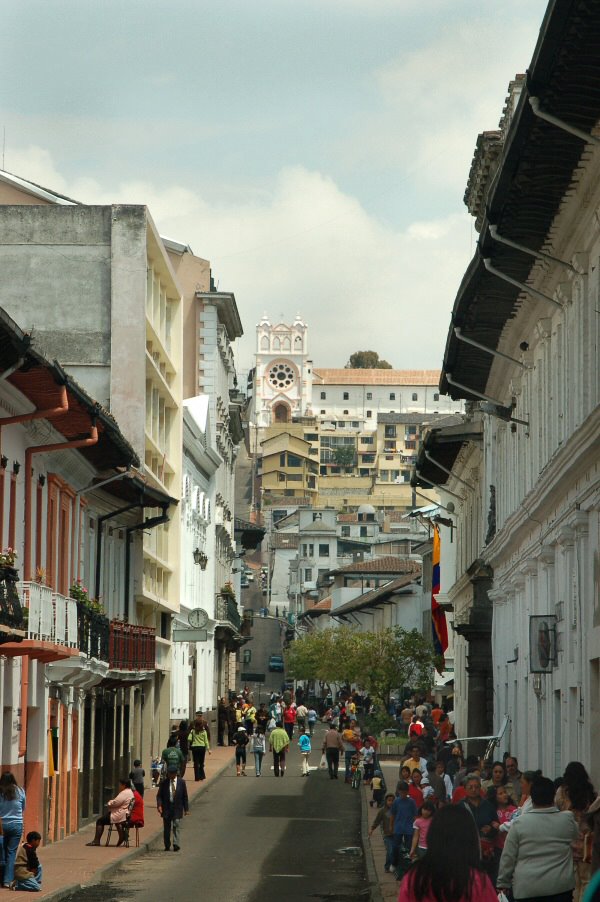 Even here, in the heart of the historic city, Quito’s hills always rise above the buildings. They provide a soft green backdrop to the city’s brightly painted buildings.

In no time at all we are at the sweeping Plaza San Francisco and its namesake church. 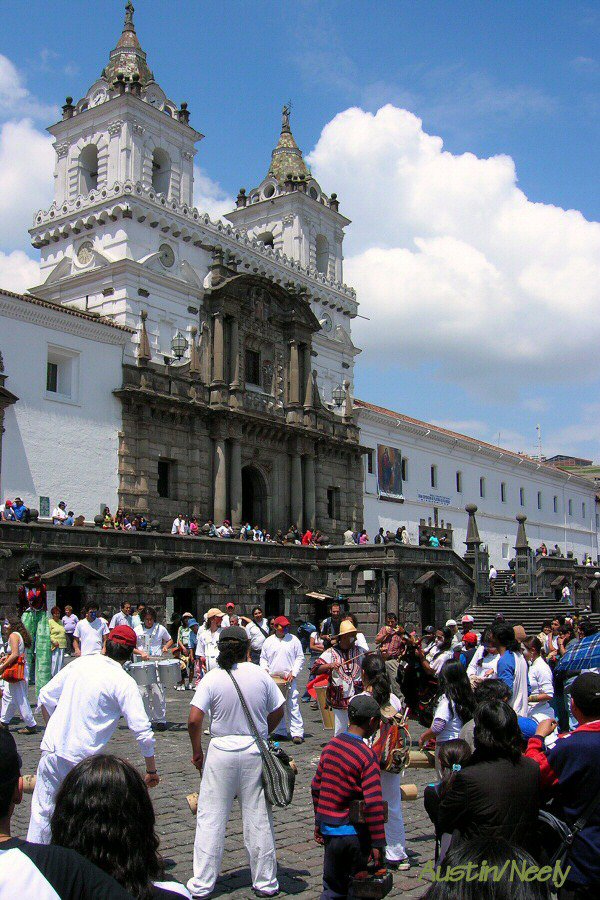 The Iglesia San Francisco is described as the largest and oldest colonial edifice in the city, although the impact of various earthquakes over the years probably ensures that little of the original structure remains.

Like so many of the churches we have seen in both Ecuador and Peru, this one is described as being heavily gilded and featuring imagery adapted from the Inca. I don’t think I can stand any more over-the-top Baroque carvings gilded with the melted artistic treasurers of the Inca empire. Too much of the old world has been carried over into the new: The art of an entire culture destroyed in order to out-do the churches of Spain – and with just enough local imagery to add some legitimacy to the conquering culture. These churches are masterpieces, but I’ve seen enough.

It is a beautiful day and the plaza is bright and sunny, surrounded by attractive buildings and filled with lively and interesting people.

It is a glorious place to be.

We wander the plaza for awhile and then join our friends at a pleasant outdoor restaurant. From here we are able to watch local life going on around us.

We are also treated to the sight of the three kings as they cross the plaza to return to their cars to change and pack up their costumes. The sight of them, still on stilts, loading their gear into a rather small car is most entertaining and a fitting ending to the morning. 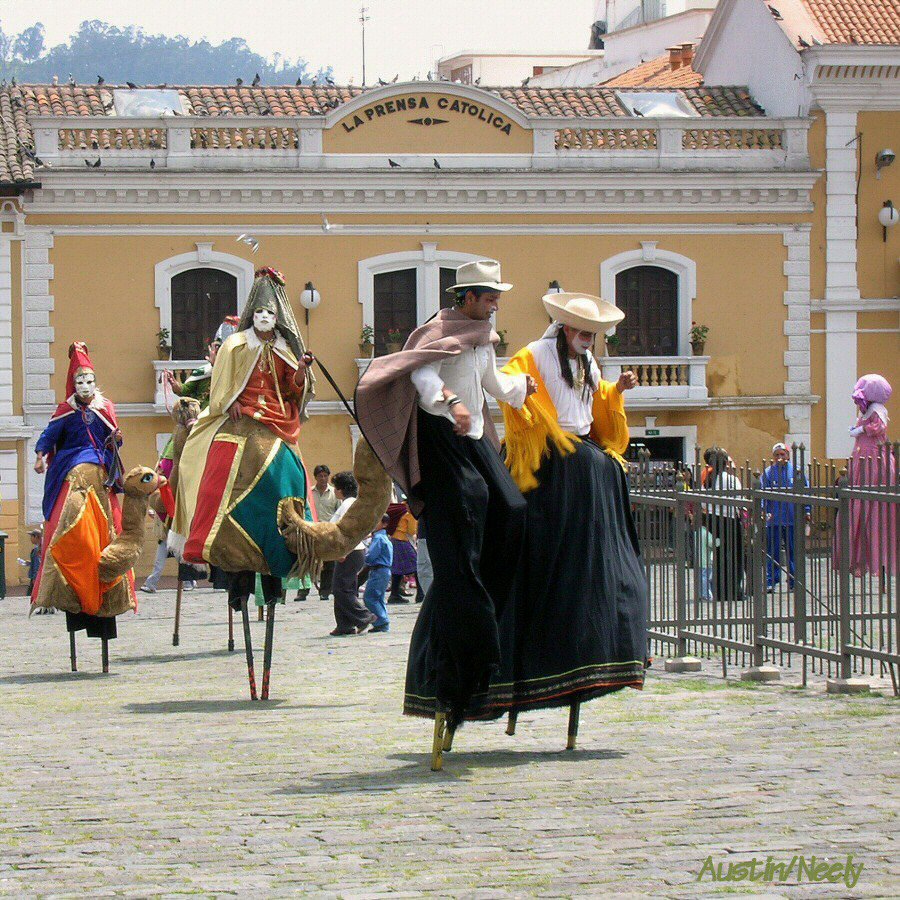