(Last Updated On: May 10, 2020)
It is Sunday and the streets of Old Town are mostly closed to traffic. It is wonderful to be here on a lovely peaceful morning, wandering along a street lined with lovely colonial buildings. 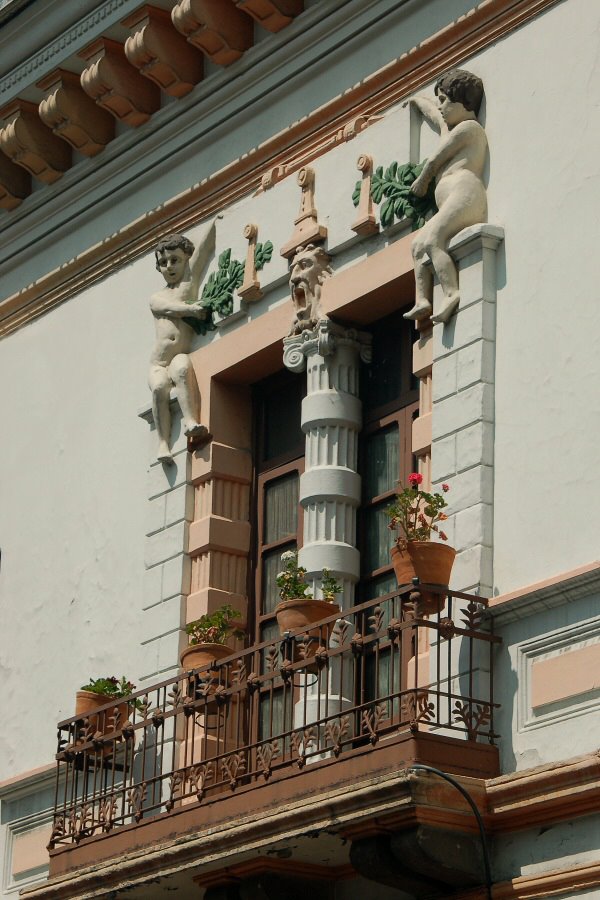 As we near Old Town coming from the Basilica, we begin to hear music. Down a side street we can see a crowd of people and . . . what?
A band?

It is a parade. There is a general consensus that we should make a detour to see it. I can see our guide Eduardo is not excited about this idea, but accedes to our request to make a short detour to see what is going on. (I imagine he is wondering how he will keep track of the 30 plus of us once we are mixed in with a crowd. On the other hand, I am far more interested in getting a taste of festivities as experienced by the local residents, rather than staying on our safe, carefully planned tourist itinerary.)

When we reach the parade, there are still a few costumed jugglers on stilts and a marching band, but clearly most of the parade has moved past this block. 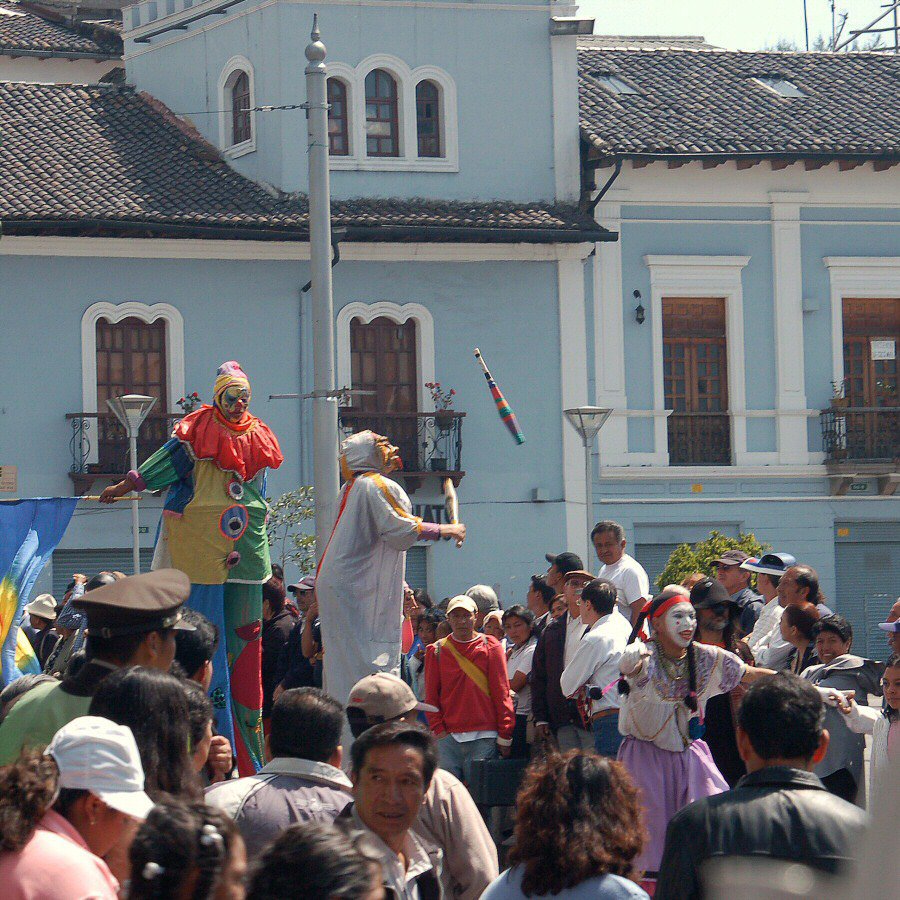 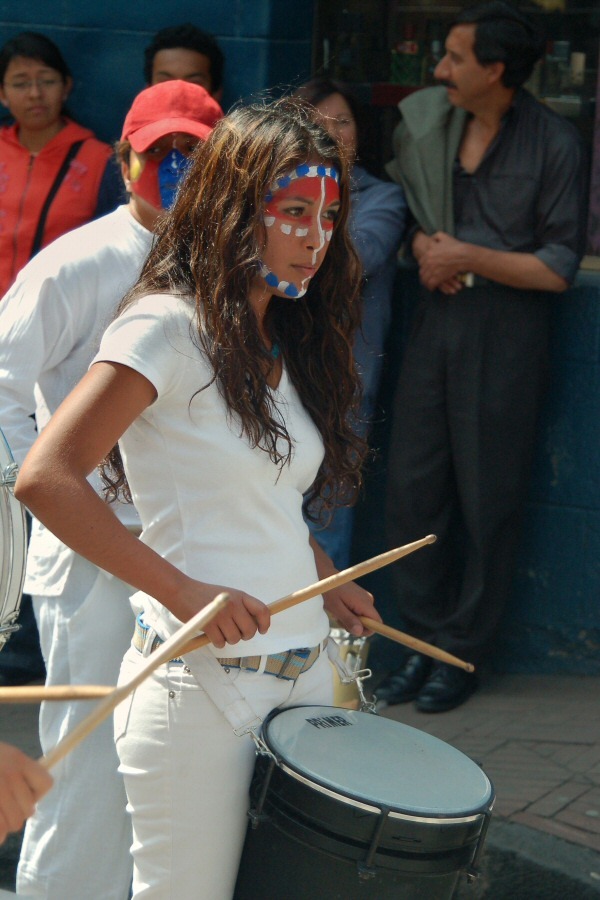 This is good entertainment, but I can see there is so much more happening just up the street a bit!

As the crowd moves in pursuit of the retreating parade, a number of us follow. 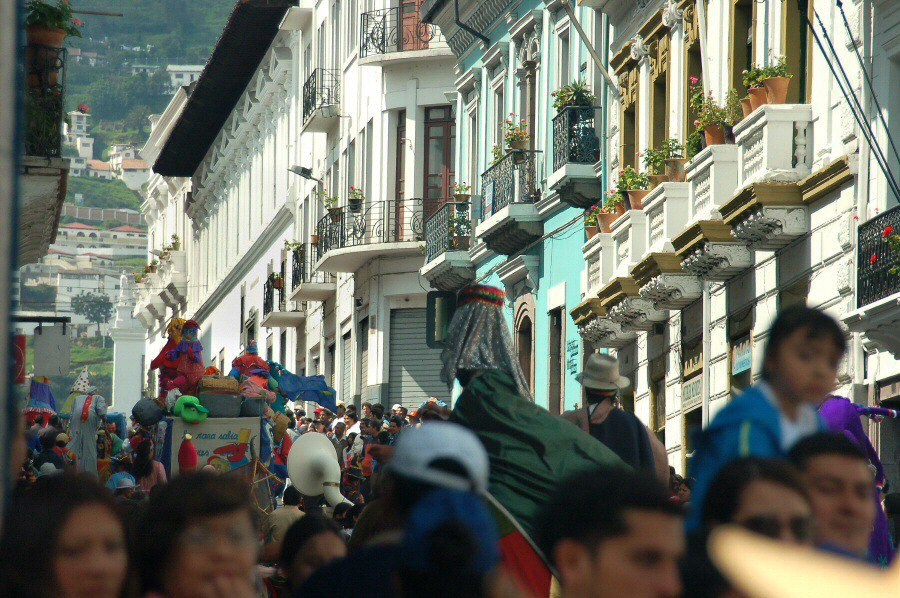 It doesn’t take long to catch up, as the parade is mostly slow moving street theater, with costumed stilt walkers and actors playing out skits: The three kings on their camels greet children while others act out traditional Ecuadorian folk themes. It is a swirl of color and activity – a storybook come to life with otherworldly over-sized images set against an exotic colonial backdrop. It is at the same time both delightful and perplexing. This is the way children must feel about the world that surrounds them.

I am not, however, blindly following the parade like one of the children of Hamlin.

I am only carrying a bad photocopy of my passport, $40, and one of my credit cards — it will not ruin my vacation if someone steals my travel purse while I’m preoccupied with the parade; even so, I occasionally check to see that my money pouch is still zipped (in hope that might deter a would-be pick-pocket for a crucial second or two). I also remain within sight of several others from our group and we have agreed we can take a cab back to the hotel if we get permanently separated from the rest of the group. I’ll take my chances, as this is just too fun to pass up.

(Of course, my well-behaved husband is not with me, but instead remains with the group as directed by our guide.)

I follow the parade a couple blocks and around a corner and then decide it is time to stop, allowing the parade to slowly continues on without me.

Soon I am back with our group, trailing along behind Eduardo on the designated tourist route.

Next Post: Old Town
Celebrating the holidays in South America