After settling into our hotel, the itinerary for the day promises:

This afternoon enjoy a tour of both colonial and modern Lima, founded in 1535. . . See the historical center and the San Francisco Church as well as Plaza de Armas and the Government Palace. Later, see the fashionable districts of San Isidro and Miraflores with their beautiful parks and elegant residences facing the ocean.

This is the only day we will have in Lima.

Our bus takes us through a mishmash of architecture both old and new, almost all in some state of decay. Despite the damage inflicted by time and weather, even the most neglected buildings seem to hint at past grandeur. It is an enticing mix.

About the time I can no longer stand just watching as these buildings quickly pass by my window, we come to an large, elegant plaza. We MUST stop here!

This is the Plaza San Martin, the center of which hosts a very large statue of Peruvian independence hero General Jose’ de San Martín.

On all sides the large plaza is surrounded by very grand and elegant buildings. I could be in Lisbon or maybe even Paris!

The cheery Christmas decorations and extravagant purple jacaranda blossoms add to the confusion – where am I and what season is this? 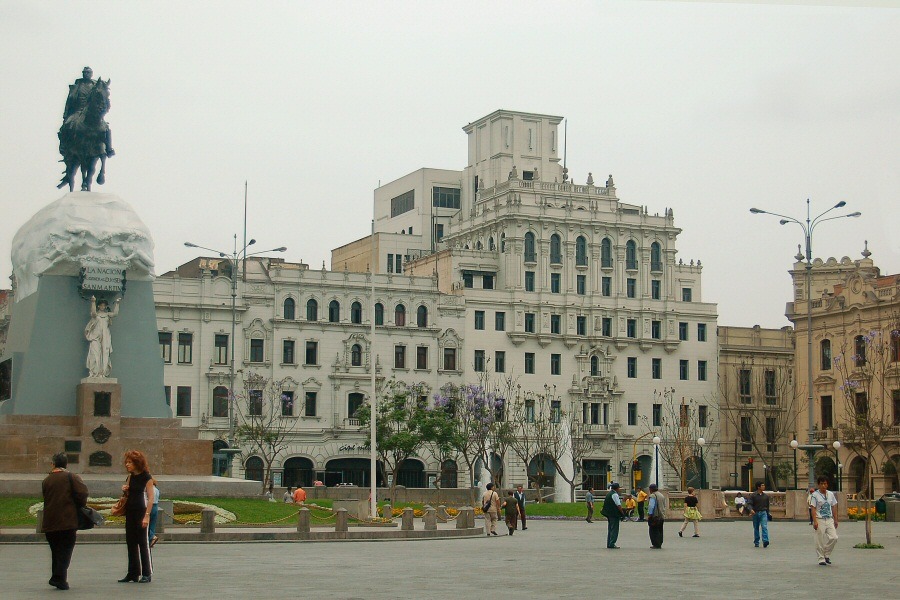 From here we are taken a short distance to the Plaza Mayor, formerly the Plaza de Armas. (Evidently renamed for marketing purposes.) Amazingly, this plaza is even more picturesque than the Plaza San Martin.

Most of the buildings in the area around the Plaza Mayor are painted ocher with bright white trim. It makes this a cheerful place. The plaza features a 17th century bronze fountain, palm trees, cheery beds of salvia and marigolds, a grassy lawn, and Christmas decorations. While most of these buildings are comparatively recent reconstructions, this plaza truly is the historic heart of the city.

People mill about the edges of the plaza, but the plaza itself – with its inviting benches – is empty. I quickly realize why: A pair of police officers stands guard next to the rather informal barriers erected at every entrance into the plaza. It appears I will not be investigating the fountain too closely.

Our guide gathers us together near the city hall, which houses a larger-than-life nativity scene on its ornate balcony. I guess separation of church and state isn’t an issue in Peru.

The streets that lead away from this area are filled with lovely ocher buildings. Shoppers scurry past horse-drawn carriages that await those with more time to linger. The scene is picturesque and enticing. 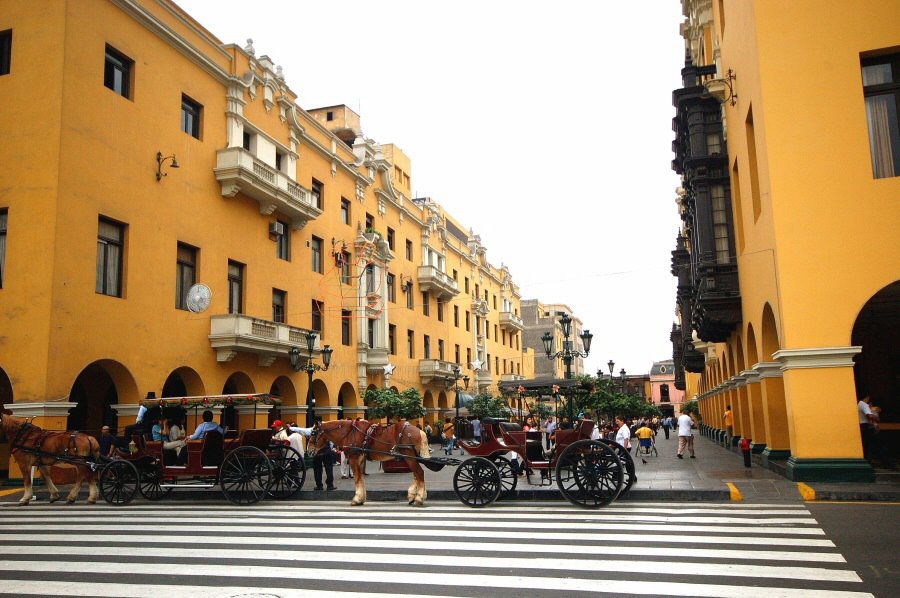 We turn the other direction, following along the edge of the plaza and stopping in front of the large elaborate Palacio de Gobierno. Despite the French baroque architectural style, the presidential palace was completed in the 1930s. It is, however, located on the site of Pizarro’s palace and so retains a direct link to the earliest government of colonial Peru.

The presidential palace turns out to be the reason for the empty plaza. Evidently there is a strike of some sort underway and the police are expecting – and attempting to thwart – large demonstrations in front of what is Peru’s White House. Evidently their effort is successful: When I turn away from the ornate white building and its brightly clad guards, the police have vanished and the benches in the plaza are being put to use. Soon I am wandering between the palm trees to the fountain.

The Archbishop’s Palace and the Cathedral are located at the far end of the plaza. Church and state, the twin powers of Spanish colonialism, each have their place on this plaza. 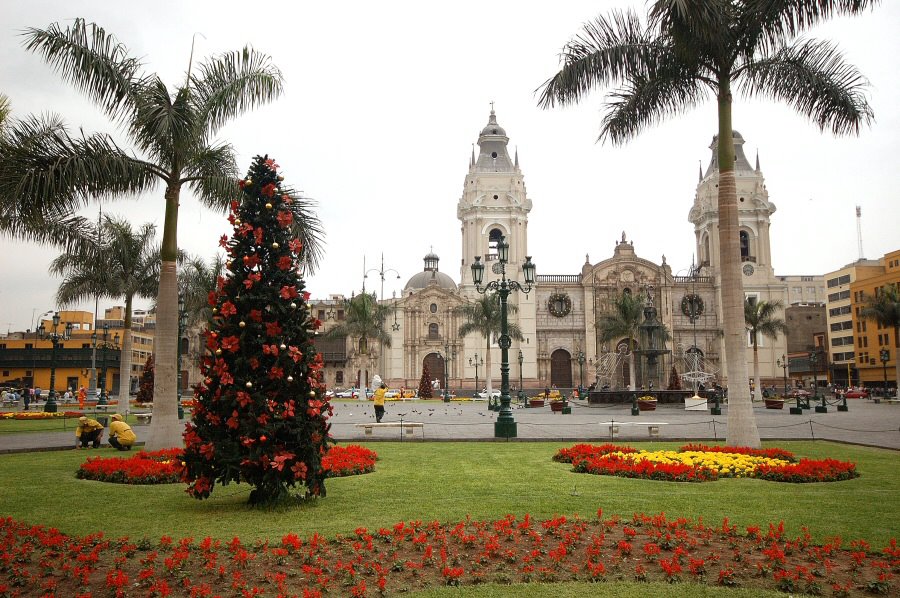 Although still located on the spot chosen by Pizarro at the founding of the city, the Cathedral has been reconstructed several times following various earthquakes. The current structure was begun after the 1746 quake. Despite periodic rebuilding, in one form or another, the Cathedral has always been part of this place. 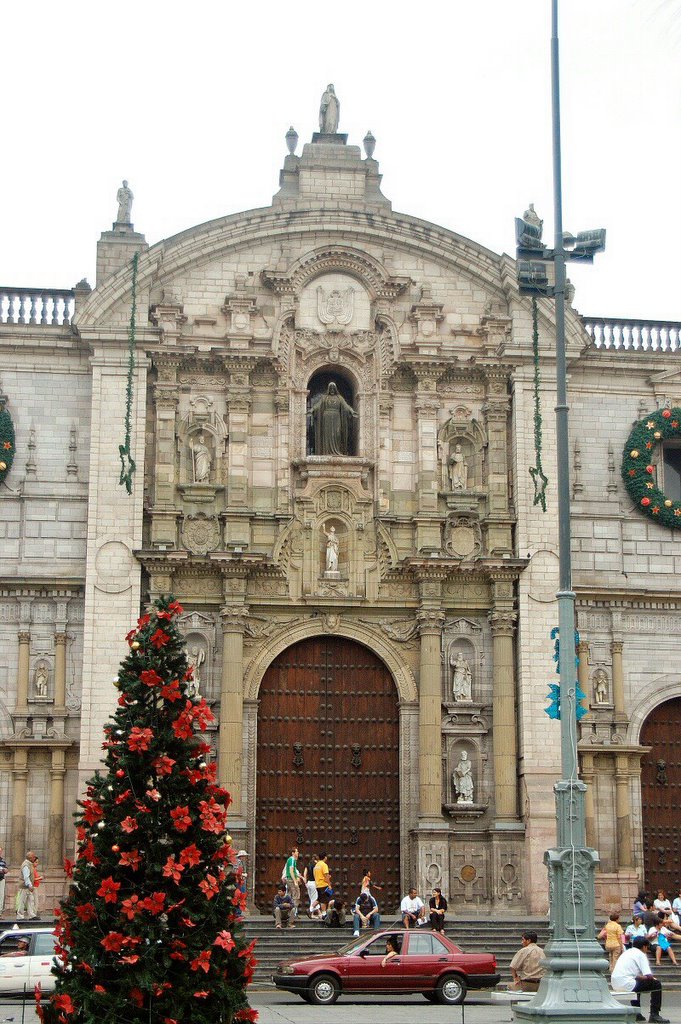 The Cathedral is complemented by the adjoining Archbishop’s Palace, which was rebuilt in the 1920s, complete with the intricate traditional wooden balconies that grace so many buildings here.

Our tour actually takes us into the Cathedral.

My guidebook describes its interior as “unusually austere.” I wouldn’t describe it that way, although soon I will see churches so heavily gilded that I can understand why some might see the clean lines and bright interior of the Cathedral as austere in comparison.

Still, it doesn’t exactly lack intricate carving and glittering ornamentation. Side chapels glitter with a gold-touched mosaics, elaborate niches house elaborate images of Mary and the saints, and decorated panels enliven the dark corridors on each side of the brightly lit nave. 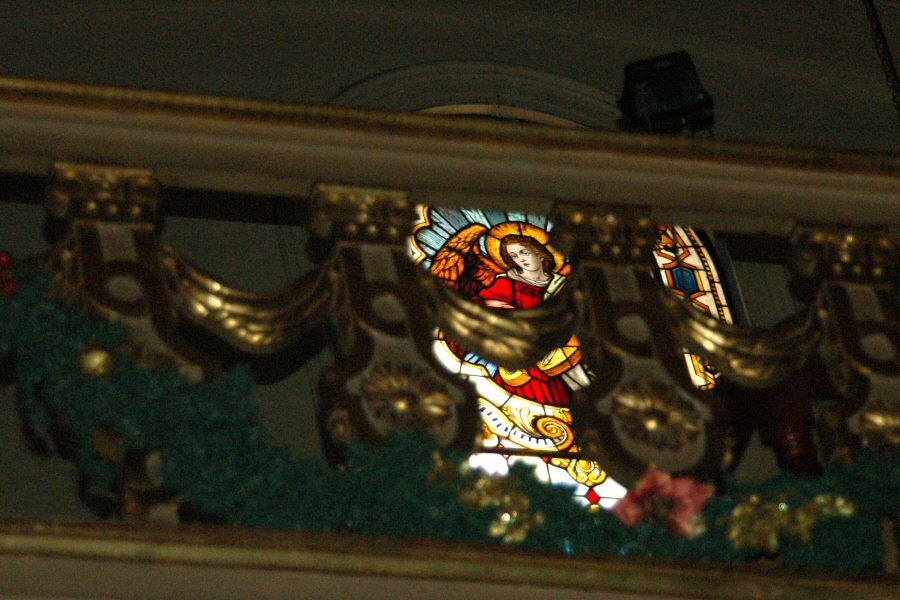 Back on the bus, our tour continues, although it does not include a stop at the rather odd-looking – and evidently very interesting – Monasterio de San Francisco.

On the other hand, our next stop couldn’t be more delightful. It is the national museum, which has a wonderful collection of pottery, textiles, and carvings drawn from several pre-Incan cultures.

I am in awe almost from the moment we enter. Before leaving on this trip I actually found time to read a book on Andean art from pre-history through the Incas. (Thank you, K!) When I walk into the first gallery in the museum I find myself face-to-face with one of the amazing pieces discussed in my book. . . and everywhere I look there are more of them. Just a few weeks earlier I had gazed at the pictures of these items, wishing I could see them for myself, and now here they are in front of me. 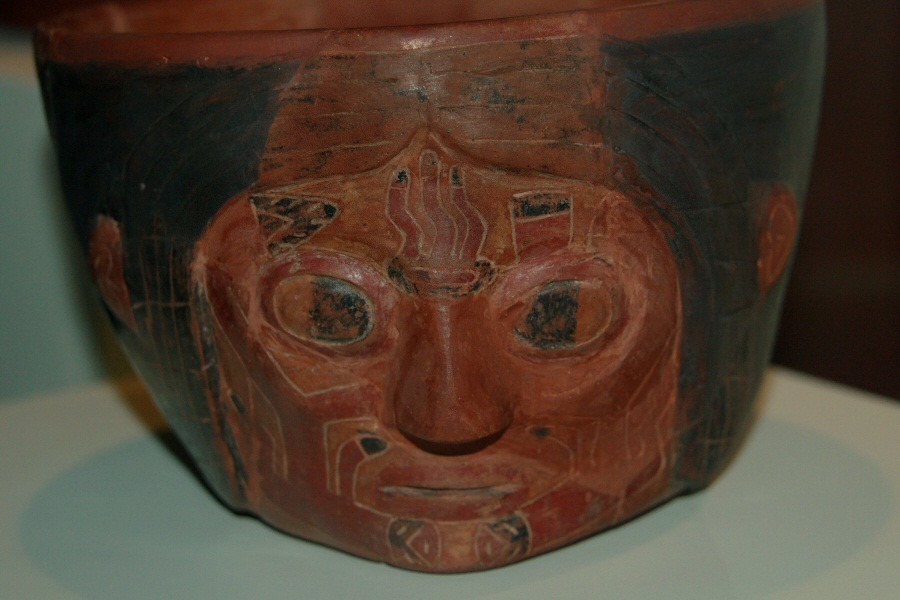 Then I reach the textile room. Wow! I could spend the whole afternoon here. The weavings and embroideries of the early Andean cultures are among the finest textiles ever created anywhere – to actually see them for myself is incredible. I’ve never seen such tiny and intricate stitches, such gloriously complex patterns. Many display familiar traditional images, but others appear almost modern in style. They are even more beautiful than the pictures in my book.

Despite the fact that Lane and I wish for more time here – and end up delaying the entire group when I get hung up purchasing a textile book he found for me (sorry) – we realize how lucky we are to have so much time here. It is a marvelous treat. 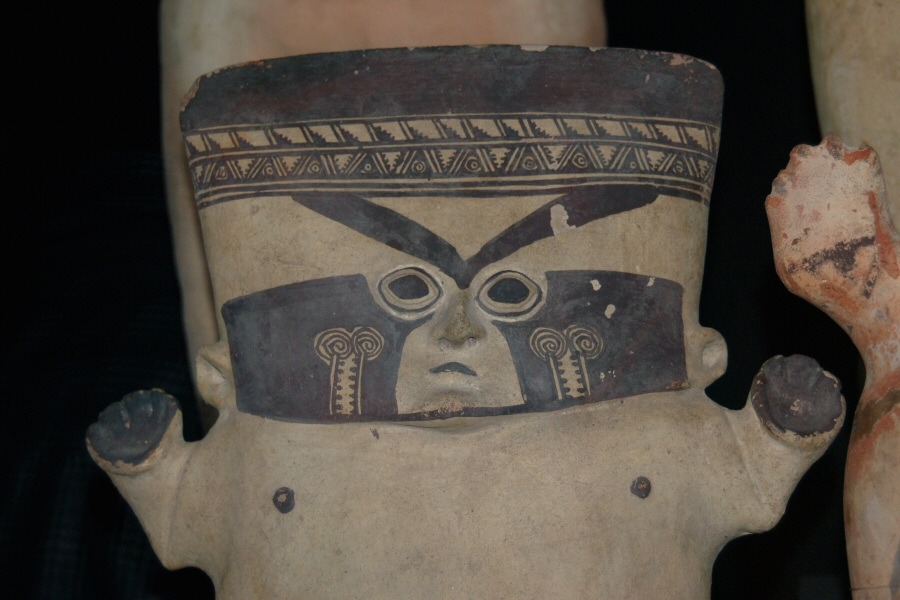 It is late in the day now and the rest of the tour becomes a hurried drive along the city’s steep coast and through the jumble of fancy residential towers and modern low-rise buildings that comprise Miraflores. These look like great places to spend some time. Next time. Someday I hope to visit more of Lima’s museums and historic buildings, explore the plazas and parks, and eat in a few of the enticing restaurants I’ve spotted through the bus window.

All posts from Celebrating the holidays in South America