Our old friends the honey badgers are out this morning. We haven’t seen these nocturnal animals since we left the Kalahari Game Reserve. Now a pair is so intent on tracking down some breakfast that we get good views of them in the morning light. 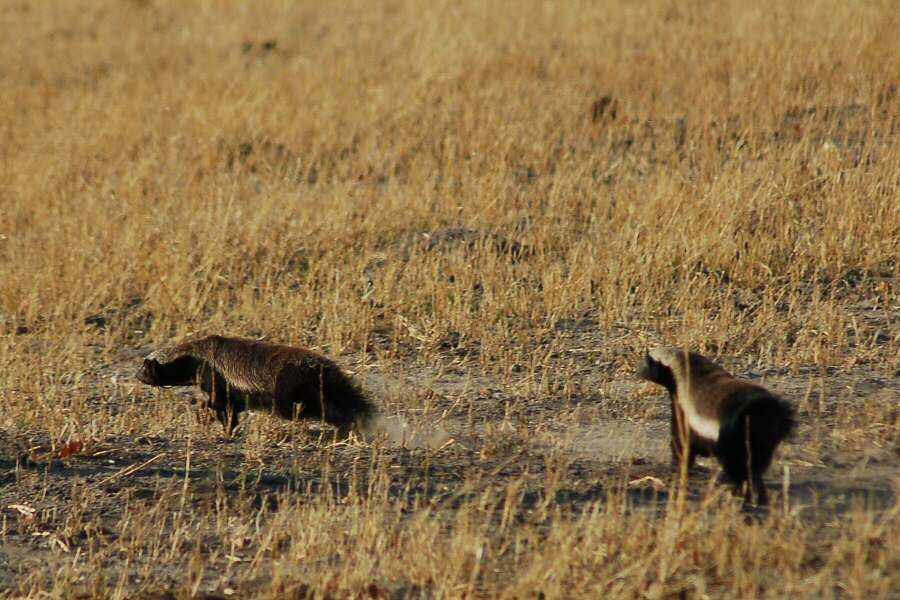 Kaiser is determined to find more cats, but he can’t find any tracks and we don’t see any leopards lying in the trees along the river. He watches the roadside to see what tracks the vehicles ahead of us were following, but even this yields few leads. Animal tracks are simply in short supply this morning. While there should be both leopards and lions in abundance here, there is little sign of them.

We do, however, find some more beautiful birds.

First off is a elegant raptor, silhouetted in the morning sun. It abandons its perch in a graceful explosion of feathers. 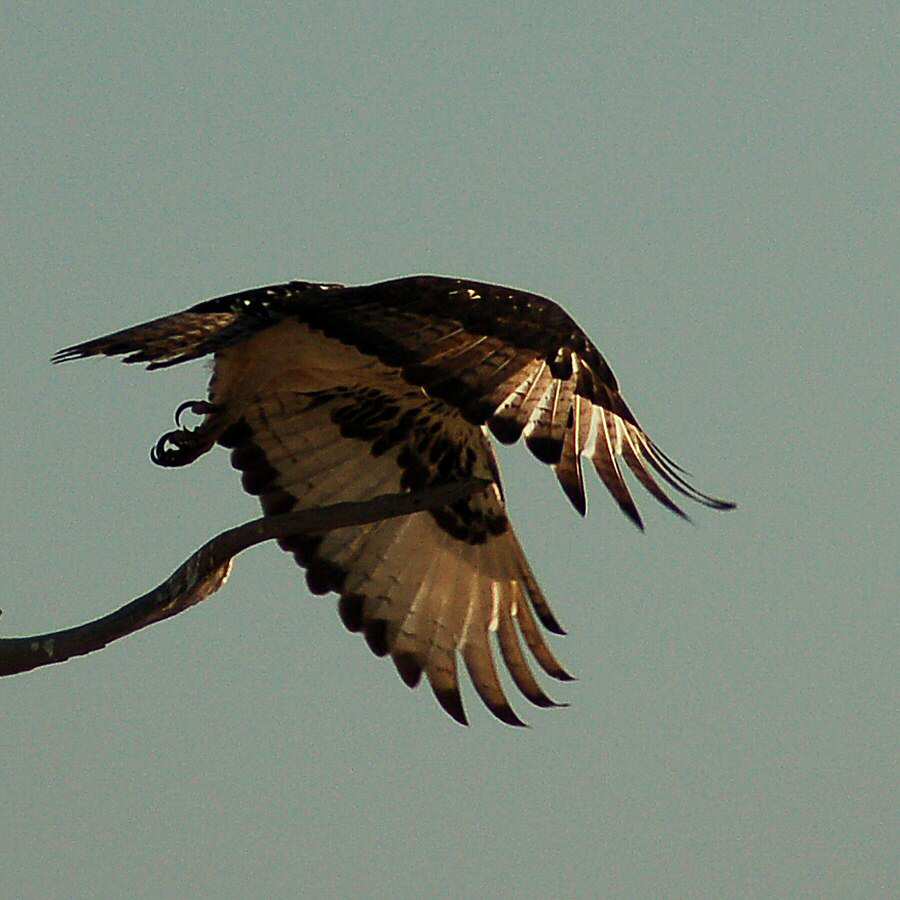 We continue to be fascinated by the lilac breasted rollers, a beautiful, graceful combination of color and style that flits from bush to bush on gorgeous iridescent blue wings. Today I am lucky enough to capture one on film as it bursts into flight. 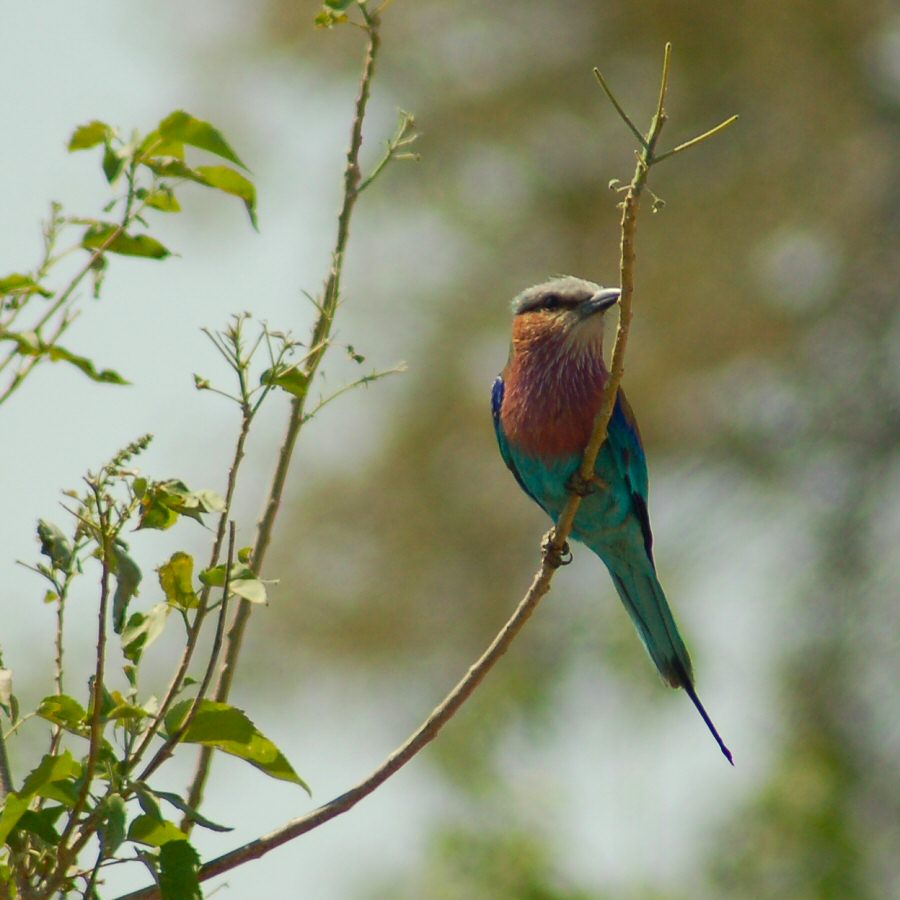 We again find a saddlebill stork stalking prey at the river’s marshy edges. It ends its breakfast with a loping gait that ends in flight.

We also find a carmine bee eater that stays still long enough to be photographed. We’ve admired these bright flashes of red in the shrubs around us, but this is the first time I’ve gotten a good look at one. Usually these nervous little birds move very, very quickly and are visible only as a flash of brilliant red.

We watch a Burchell’s coucal search around in the marshy grass until it hunts down and captures a snail.

Soon it runs off with its prize.

The river is alive with hippos this morning, both in the water and grazing along the shore. We can almost hear them as they methodically, almost mechanically mow down the lush grasses. 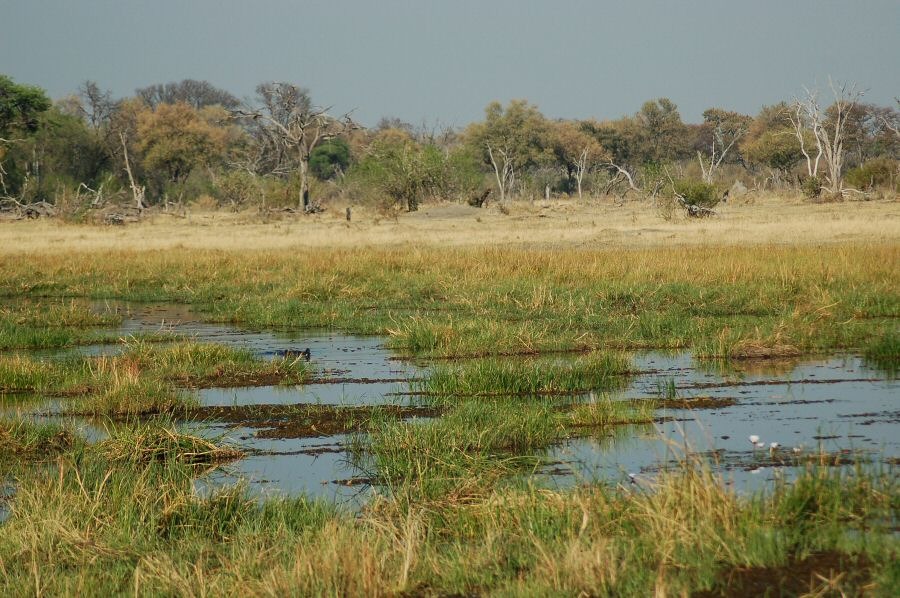 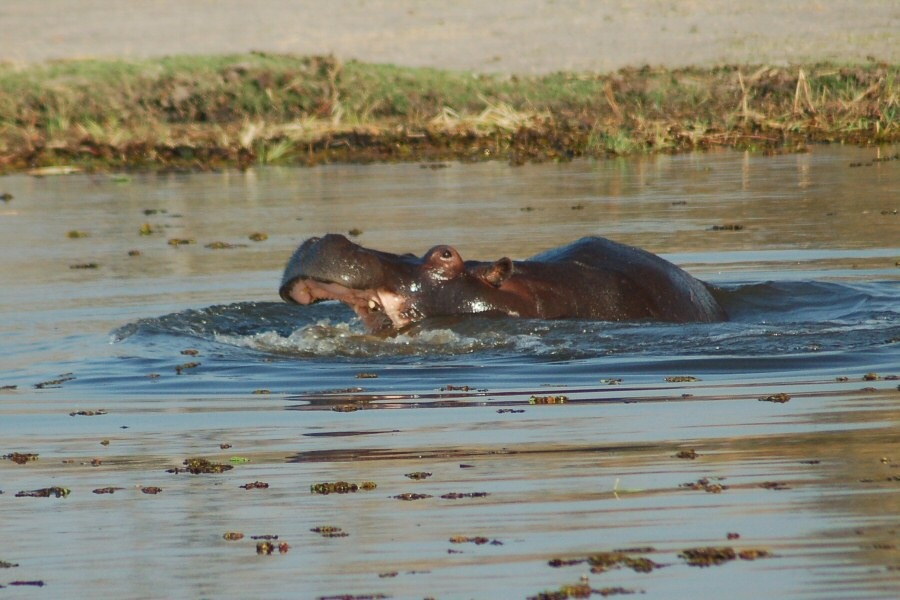 There is also a very entertaining family of warthogs. As the day gets warmer, the adults are clearly reluctant to move unless it is absolutely necessary. A younger warthog, however, eyes us warily and paces nervously, ready to flee at the least provocation. 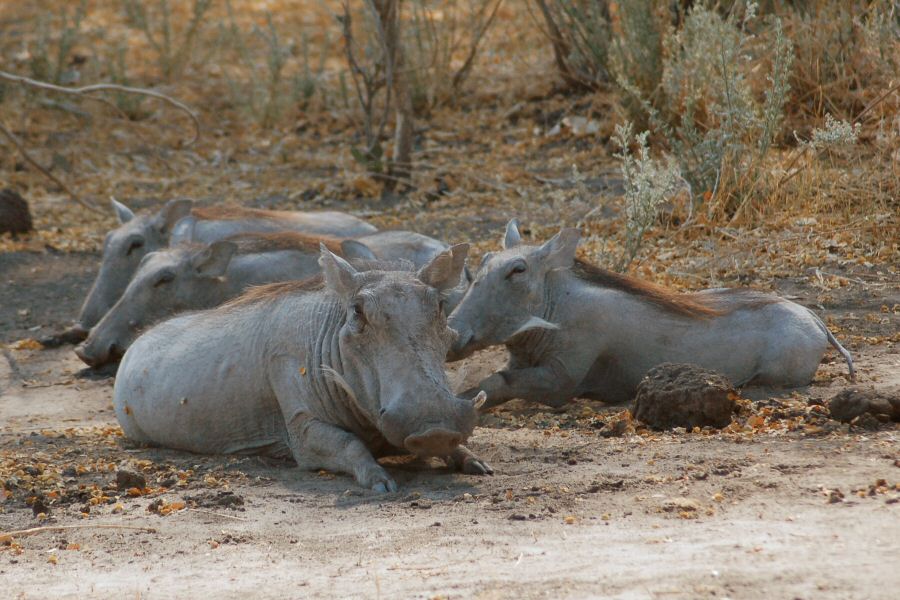 A pair of kudu head into the brush.

And, of course, there are impala scattered about. No matter how many times we see them, they are still beautiful.

Here, where they graze amid the sage, the air is heavy and fragrant.

We have a little time at camp before lunch, so my husband and I walk to the public campground to take a shower. As we arrive a truck pulls up outside the restroom facilities. The driver gets out and putzes with something beside the rubbish box. Hmmm. What’s that about? Maintenance?

In the restroom I check to see if there is actually water and whether it is hot. Yay! There is water and it is hot. I gingerly set my stuff up amid the dust and dirt, undress, and turn on the water. . . Nothing. How can this be? I hear the toilet running. There has to be water. I try again. Nothing. Eventually I decide the shower is not going to yield any water. I wrap myself in my towel (there is no door to the restroom and the guys with the truck are right outside) and check the faucet. A steady stream of water comes out. I check the shower again. No water. I flush the toilet. It flushes. I check the shower. No water.

I really need a shower. I yell over the wall to my husband. “Any water in the shower over there?” “There was, but it quit. I’m using the sink.” Lovely. When he finishes I make him come into the women’s side to block the door so I can at least wash in the sink. When I finish I feel only marginally cleaner.

K and M arrive just as we are finishing. I warn them there appears to only be water in the sink and they head to the men’s side to see what they can find. Soon water gushes from the shower. The truck leaves. Next to the rubbish bin stands a water spigot.

I consider starting over and taking a shower, but I am crabby and my towel is wet and dirty. I cry a little as we walk back to camp through the hot dusty sand and pray that the next campground will have a functioning shower.

On the Road to Savuti

As soon as we finish lunch we leave for Savuti.

This is a day earlier than planned, but Kaiser thinks many of the animals that are usually here have moved elsewhere and he wants to find them.

From there you will continue northwards to Savuti Marsh for one night, which is renowned for it’s lion and other predatory activity.

We drive past the public campground and over the log bridge at North Gate.

We stop briefly at Khwai Village to buy ice.

And then, we are off. 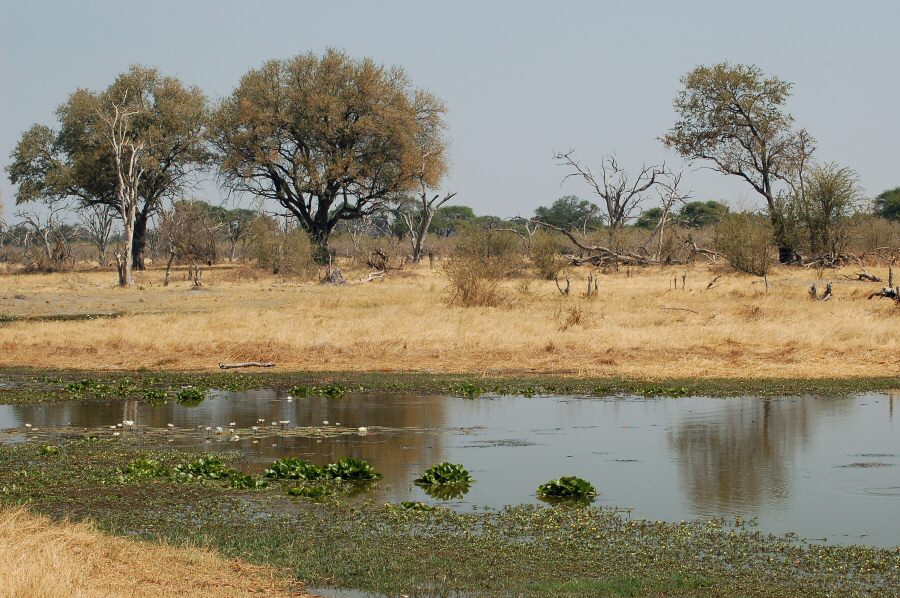 We also meet up with a group of ATV riders. They look miserable – the ATVs make far more noise than our truck and kick up clouds of dust. Most of this group (which includes some fairly young kids) is bundled in protective clothing from head to toe. It looks hot and really, really dirty.

Here and there we come across groups of elephants along the road.

The elephants have destroyed most of the vegetation in the areas they frequent and dead trees are visible everywhere.

The ATVs roar past us and between the elephants.

Later Kaiser stops and locks the wheel hubs. He told us this would be a bad road with deep sand, but it hasn’t seemed too bad thus far (at least by Botswana standards). Apparently we’ve now reached the bad part. To get to Savuti we must cross the Magwikwe Sand Ridge, a deep, sandy remnant of an ancient lake. We have reached it. 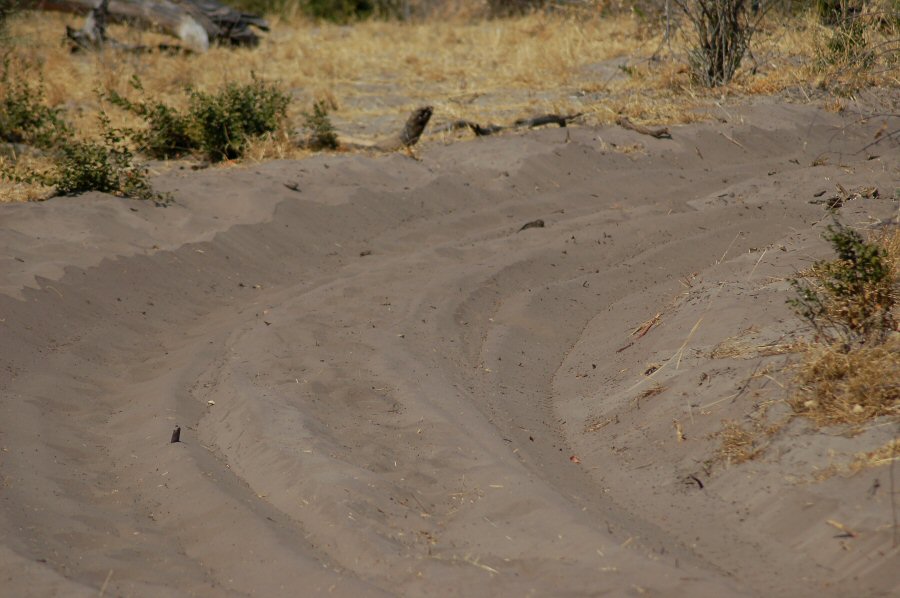 Kaiser works his way steadily, carefully through the sand. We meet a few vehicles and – no matter how much more lithe and limber the other vehicles appear – it is always Kaiser who pulls out of the track and into the deep sand and brush along the track. I wonder at first why this is and then realize that Kaiser probably believes (probably rightly) that he is a better driver than anyone we meet and thus moves out of the way so the others don’t get stuck.

As we drive, the single track separates into two. Kaiser stays on the one on the left and I am not sure if this is because the tracks are separated for two-way traffic or because the other track has become unpassable. Soon I have the answer.

After chugging most of the way through the sand ridge, Kaiser makes a fast, sudden turn into the sandy “median” between the two parallel tracks. We quickly see what caught his attention: Our supply vehicle is sitting, obviously stuck, in the other track. As we arrive on the scene they are putting branches under the wheels in an effort to get enough traction to move forward. Kaiser parks nearby and heads over to check out the situation.

In no time he is directing them to back up, back up, back up. The engine roars as they plow, backwards, through the deep sand to a spot where the two parallel tracks run closely together. Once they are on the track we had been following, Kaiser sends them forward on their way. We follow them backwards and then down the track for some time.

Now I know why we have seen brush laying in the road.

Mostly we drive through mopane forests or, more accurately, the remains of mopane forests. Elephants like to eat mopane trees and repeatedly break the new growth off at a consistent height each season.

This leaves miles and miles of short, shrubby-looking trees with thick trunks. However, now as we get closer to the Mababe Gate into Chobe, the number of elephants living near the track must decrease, as the trees become taller.

We drive for miles through forests of healthy mopane trees.

We enter Chobe at the Mababe Gate and turn toward the – currently dry – Savuti Channel.

This channel once spilled out onto a huge flat expanse that is the bed of an ancient lake, creating Savuti Marsh. Although the Savuti Channel periodically flows, it has not done so since the early 1980s. Several manmade waterholes are the only sources of water in the area. Despite this, the area is known for its great quantities of game and is particularly noted for the number of both lions and large bull elephants.

Like Tsodilo, this area is also home to a number of rock art sites. Unlike Tsodilo, the density of predators makes hiking here a more dangerous activity – one we willingly decide to skip.

The area is beautiful. For the first time since Tsodilo there are rocky hills here. Also like Tsodilo, it is getting late in the day and the hills glow golden red in the late afternoon light. 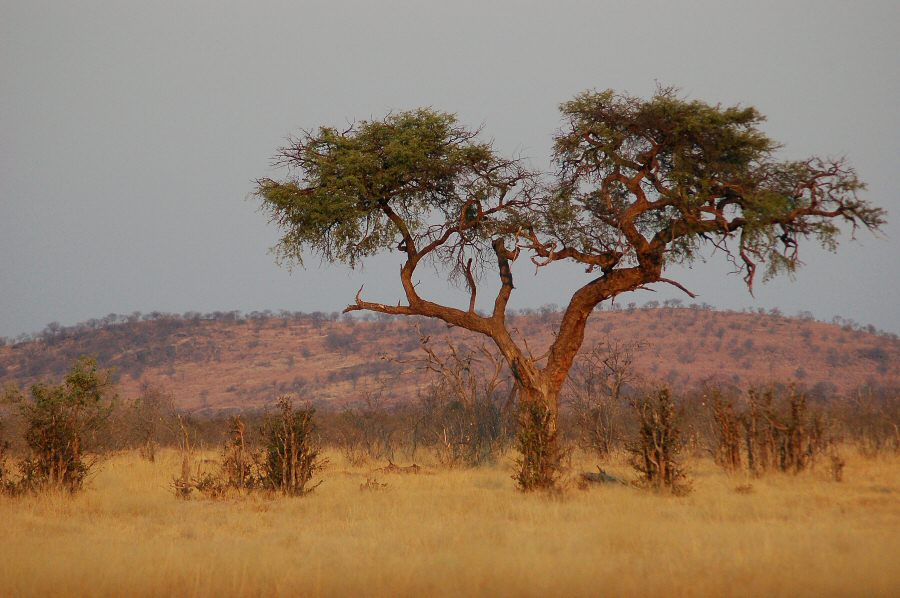 We head to a watering hole crowded with elephants, an impala awaiting its turn. The elephants appear to have little interest in sharing. An adult elephant can drink 200 liters in a single session and this giant thirst means the elephants pretty much monopolize the waterholes around the park.

Kaiser finds a spot for us to take sunset pictures with elephants in the foreground, but we want a foreground element that won’t move and look instead for interesting trees to focus on. We appear to be the minority in this, as it is very busy here and many people are using the elephants as elements in their photos. I hadn’t known a picture of an elephant in front of the setting sun was obligatory.