I awake rested and eager for the day.

At breakfast we talk about the wind as we watch the other campsites empty out. We now have this amazing place pretty much to ourselves.

Explore the area in your vehicle around Tsodilo Hills including villages, schools and clinics. You will also get a chance to visit one or more of the Ilala Basket Weaving Co-operatives. These community-based programs are put in place so that the women of the community are able to provide for themselves and become more sufficient. The baskets that they produce are sold throughout the world and are truly beautiful. This night will be spent at Tsodilo.

We are eager to begin. A San guide has been arranged for us and we head over to the museum to meet him. The small museum is modern and well designed. It provides a great deal of information on the paintings and the cultural significance and history of the hills, although it says little about the geology of the area. The presentation seems balanced and does not shy from discussing the controversies that still surround this site.

Our guide is a well-dressed older man with the golden skin and almond eyes of the San. He refers to himself and his people as bushmen.

We start by asking him about the wind. He laughs. “Yes, very windy” and indicates that this is not unusual. Wow. No wonder there are ancient myths about the powerful spirits that inhabit this place.

Our tour begins at the base of Female Hill, where we were when darkness overtook us the evening before. Along with the paintings we had seen in the twilight, he points out others that we would have missed. Most of the clearest paintings are easily identifiable, but he provides additional information on a number of them. 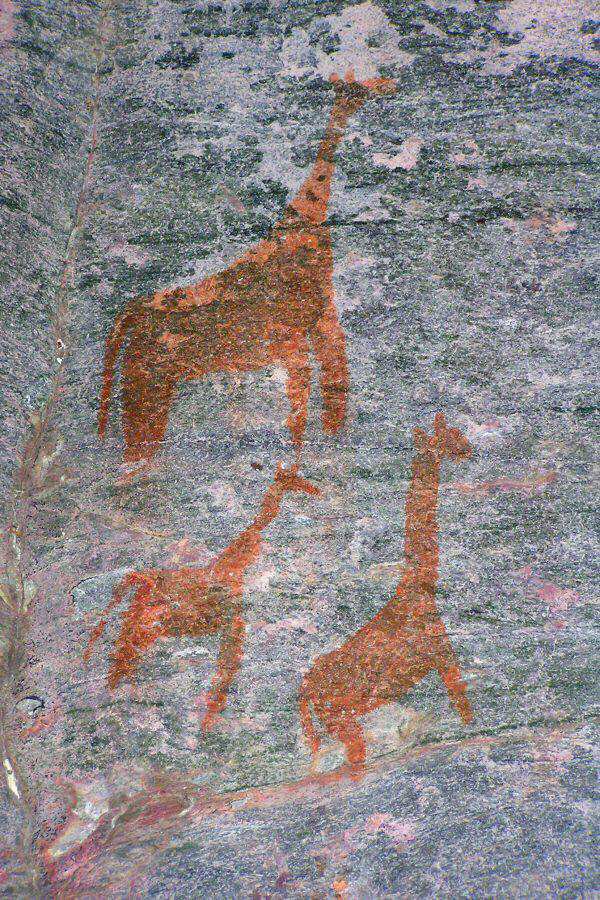 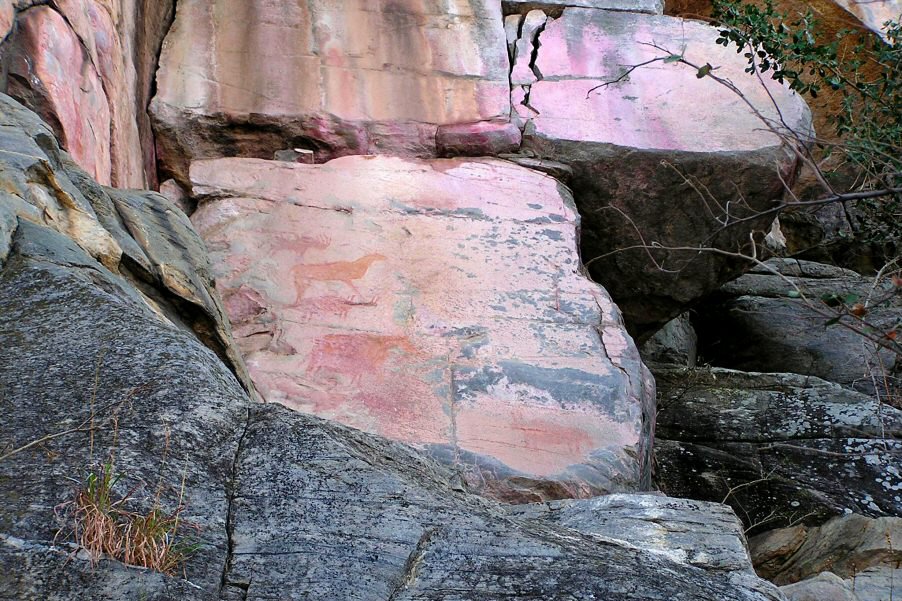 When we come to a large cave, he points out the sooty ceiling that marks the location of the cooking fire and the game “boards” carved into the stone. 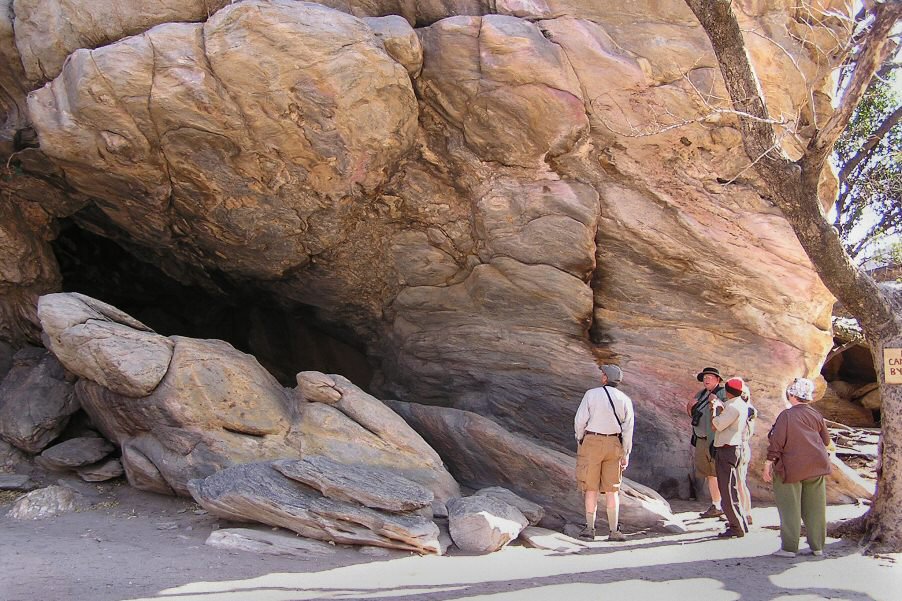 We exit through the back of the cave and soon are climbing the hill itself.

We are following what is posted as the “Rhino Trail,” but in most places the “trail” is not very apparent. 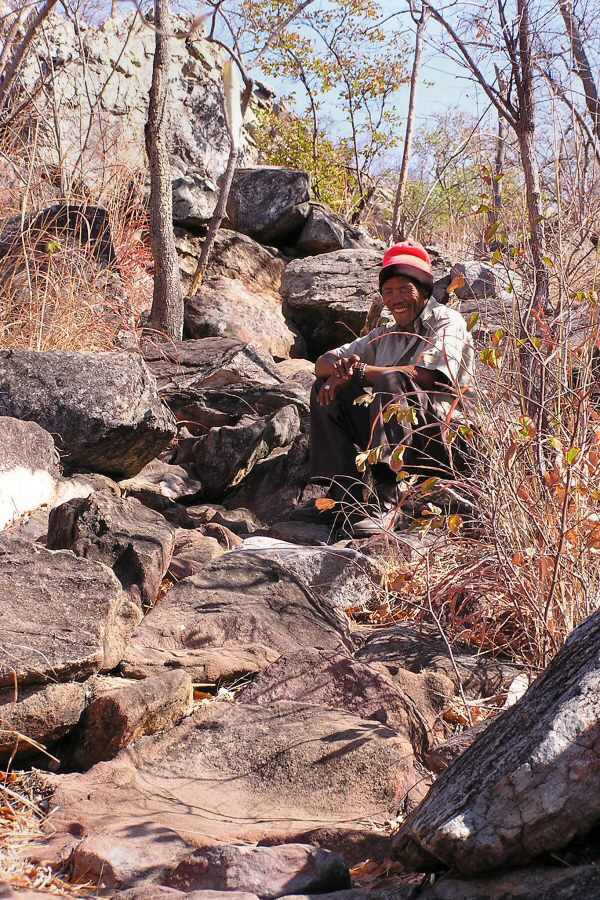 Besides pointing out the paintings (some of which we would never have spotted on our own), our guide also provides some cultural information. His English is relatively clear and understandable, but only extends to the topics covered on the tour. When I ask the name of a odd plant, he seems sad to tell me he does not know what it is in English.

But has us taste both mongongo nuts and another nut that tastes a little like a pecan. Both of these are traditional foods for the bushmen. While I dislike the mongongo, the other nut is absolutely delicious. 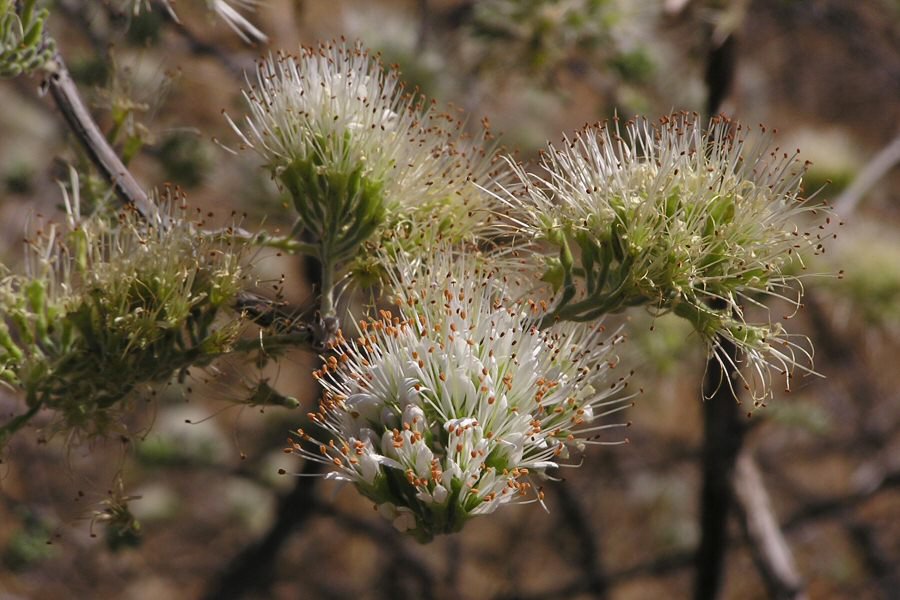 We eat our mongongo nuts in a level, open area partway up Female Hill. Nearby we come to a clearing that is beginning to fill in with brush. Our guide points into this area and explains that this is where he was born and where his family lived until the “black Africans” forced them to move. We had known that there was once a bushman village located on the hill and that its removal has been controversial. Now this dispute suddenly seems very personal: This village had been home to our guide. 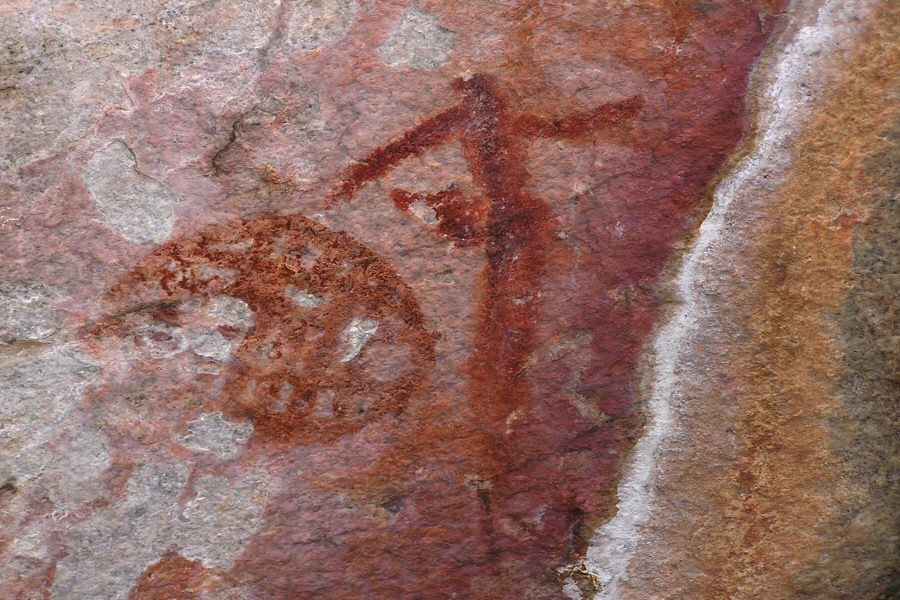 The trail back isn’t a trail, just a long scramble over and between very, very large boulders. 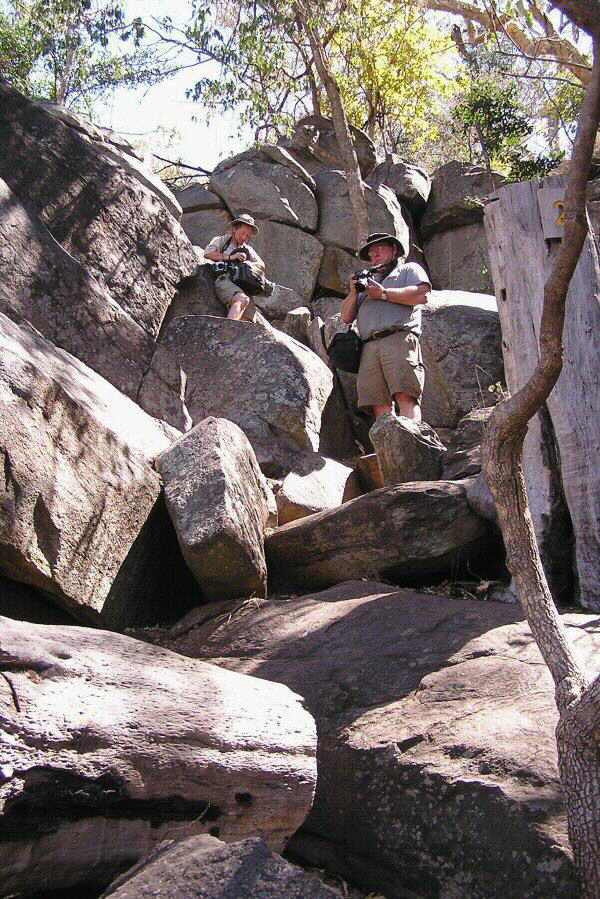 The 1½ hour hike takes us 3½ hours. Our guid is patient, but is clearly preplexed by our slowness.

The sun is high, it is hot, and we are exhausted when we return to the museum.

In the museum shop I buy a small covered basket (the only basket they have) and some necklaces made by women from the relocated bushman village.

I also discover that my battery charger is compatible with the outlets in the museum office and they let me charge my camera batteries. I am overjoyed by this small kindness. Botswana’s electrical outlets confounded me at the bed and breakfast and my digital camera is in desperate need of a charge (my main camera actually died on the morning hike). Despite having “universal” chargers, M and I are spending much more time than we would like figuring out where and how we will charge our camera batteries. (Aside from this, our digital cameras hold up well in the dust and heat.)

Despite our itinerary and the promises of safari company owner when we met him in Maun, there is no plan to take us to either visit the local villages or shop at the basket co-op. K was really looking forward to the basket co-op, perhaps in part because her mother collections baskets. However, instead of arguing, begging, or otherwise insisting that we be taken there, K sits pouting outside her tent. Good grief! Time to do something.

So my husband and I begin to badger Kaiser, who seems mystified by our request. The basket co-op is a long way away. We know – we saw the road signs on the way here. There is not enough gas. We are joined by K’s husband. We remind Kaiser that we were promised this outing just a few days ago by the safari operator. We insist. We beg. Finally he says yes. He will take us to the basket co-op.

While they siphon gas from the supply truck to fill our vehicle, K and M get ready to go. They hurry because M wants to be back in time to take pictures in the late afternoon sun. My husband has already decided not to go – it’s too far and he isn’t interested in baskets. Although I wasn’t looking forward to the long trip, I wanted to go. However, now I watch the others scuttling around and M tells me to hurry. I am reconsidering.

Even though these are some of the finest baskets made in Botswana, I don’t mind missing the basket shopping. I don’t NEED to buy baskets and there will likely be other opportunities. What I really want is to see the village. Maybe I could skip the shopping and just explore the village.

But things have been tense between K and I since before the trip began and I am tired of all of us ALWAYS being together. An afternoon hanging around the campground with just my husband and K’s father sounds better by the moment.

Kaiser is surprised when I tell him I am not going. I thank him for taking K there and wish him a good trip.

K’s father tells me about his career (he is retired now) and growing up poor and his philosophy on many things. Then we talk about Botswana and the state of the world in general. We play three-handed cribbage with my husband and then the two of them play cribbage while I write.

After awhile I have visitors. A park employee and one of the jewelry makers have American dollars they would like to exchange for Pula. The nearest bank is a long drive from here, so I dig through my cash and exchange most of what they offer. Would I also be interested in rand or pound sterling? Often tour books say that US and other major currencies are accepted everywhere, but for many people in rural areas those dollars or rand or whatever are essentially useless.

As the sun drops lower in the sky and the hills began to glow, my husband and I walk along the hills, taking pictures and admiring the both the stones and paintings in the gorgeous light of late afternoon. The pinks and reds glow warmly and the areas heavy with micas and veins of quartz flecked with gold glitter. On our hike we had realized that the vivid green markings were not colored stone, but living lichens. Now they stand out boldy against the colored stone. The stone itself looks like sandstone, but seems harder. My Bradt guidebook tells me it is a metamorphic rock called micaceous quartzite schist. It does not tell me how these hills came to form here, so isolated from similar features. 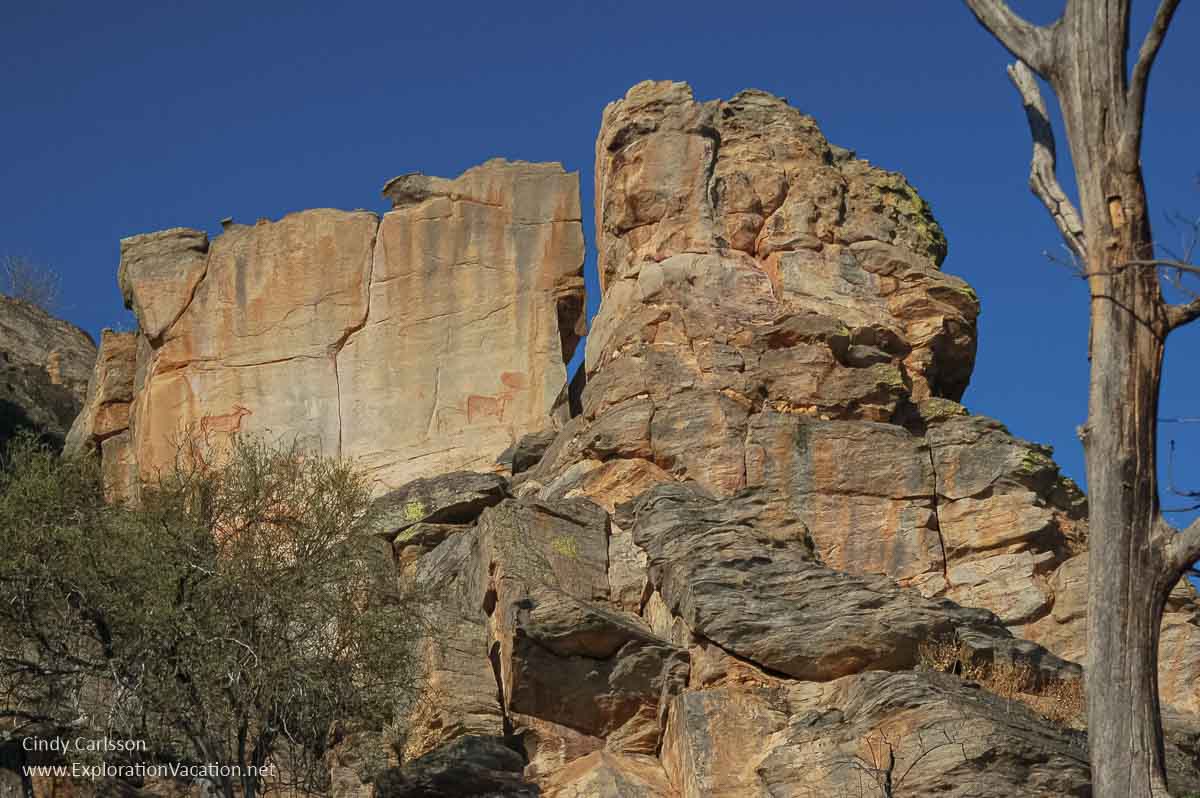 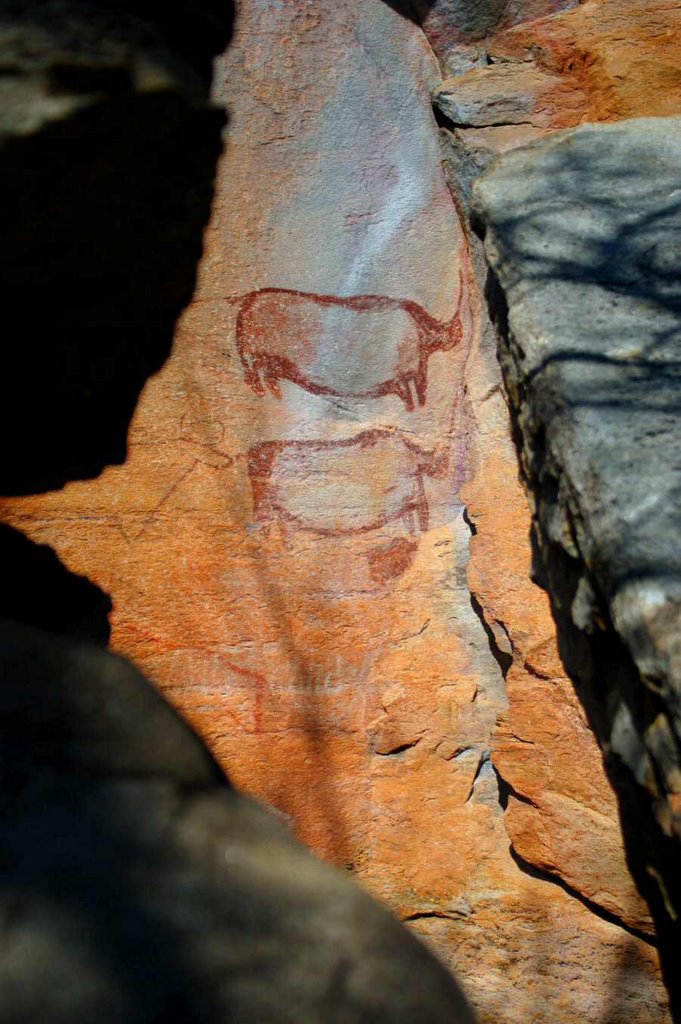 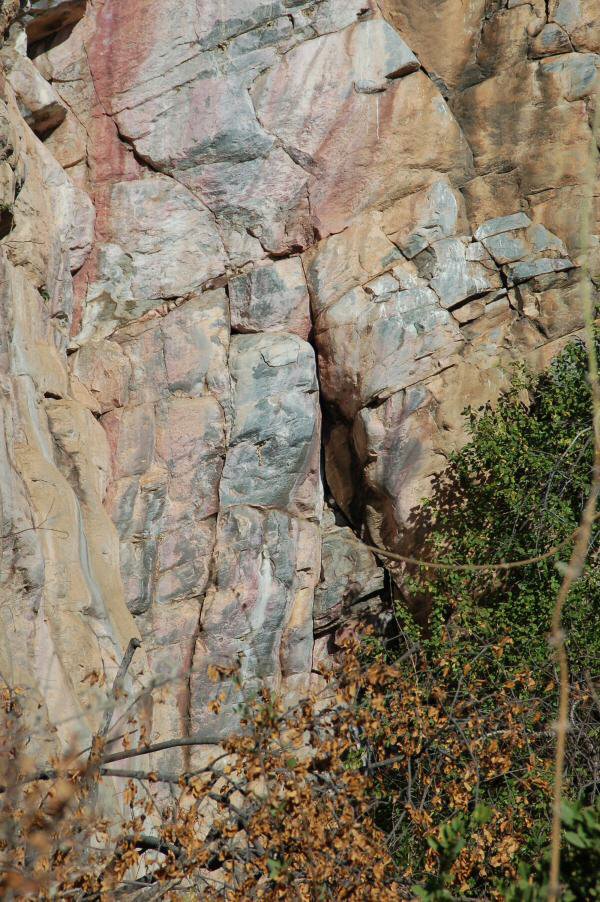 When we return to camp, K’s father is peppering Dick (the camp assistant) and Mass (driver of the supply truck) with questions about daily life and social norms in Botswana. We listen in.

It is not yet evening, but the moon is already rising above the hills. It gets noticeably fuller every night, although most of the time we can actually see it high in the sky throughout much of the morning. I hope that K and the others have had a successful day at the basket co-op, but I am happy here, relaxing by these beautiful hills.

It is a still night, the quiet broken only by the howling of the camp dogs.